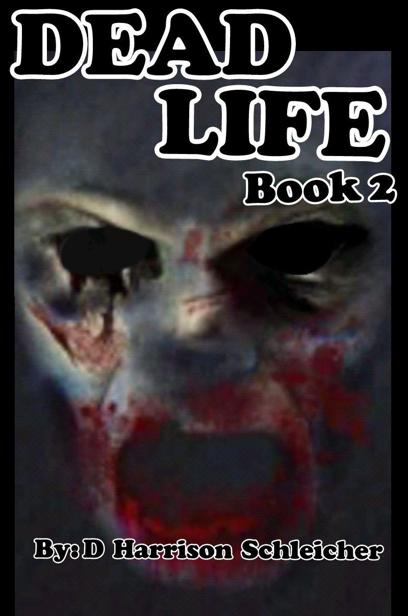 I started back to the front of the store.  Since Gina's purse was here, she had to be here somewhere.  She wasn't in the back with the security guards and Mary so I hoped she had found a hiding place.  The sweetest sound came over the intercom.

“Steve, be careful.  The security guard has gone crazy.”

I got to the front of the store and got back on the intercom.

“I'm in the conference room.  I locked myself in.”

I felt pretty stupid.  I should have checked there before I went in back.  The conference room was where the managers' offices were and it was in the front of the store by the pharmacy.  I got to the door and used my keys to open it.  There was Gina.  She dropped the folding chair that she was holding and threw herself into my arms.  We just stood there holding each other.  She was crying.  It was quite the reunion.  We pulled away from each other and I looked her over.

“No, I was in the bakery and I heard Mary screaming at the guards.  When I came out to see what was going on, they were wrestling around on the ground.  The little greasy one had the big one down and was trying to bite him.  Mary was hitting both of them with a broom and screaming that she was going to call the police.  That's when the little one got off the big one and stated chasing Mary.  She headed for the back.  Then the big one jumped up and went after both of them.  His face was bleeding and he looked pretty mad.  Then he pulled his gun out, looked at me, and yelled for me to call the police.”

“Did you call the cops?”

“No, I tried but the phones weren't working.  Let me finish.  That's when I heard gunshots.  It sounded like there were at least nine.”

“I don't know.  They were back there and I was in here by then.”

“I locked the door, grabbed that chair, and stood here waiting for him to come and get me.  I was trapped in here.  The store's locked and I wasn't about to go out there.  I just hoped he wouldn't find me.”

That's when she noticed the gun I had strapped to my hip.

“Is that the security guard's gun?”

“Of course I can shoot a gun.  My dad taught me how when I was just a kid.”

“We'll see about getting you one.  I guess you can have the security guard's gun.”

“Did the big one kill the little one?”

“That's not exactly what happened.  They're actually both dead and so is Mary.  I had to shoot all three of them.”

“They were zombies, weren't they?”

“You believe me now?”

“When I saw those two fighting on the floor, you were the first thing I thought about.  That with everything I saw on the news before I came to work made me realize you were right.  I'm sorry I didn't believe you.”

We went to the doors and were just about to head out when Gina noticed the six people milling around the Hummer.

“Steve, what's going on out there?”

“You really think zombies are that interested in what you drive?”

On closer examination, I realized she was right.  Things were getting bad faster than I expected.  Maybe it was time for me to get some glasses.  It was too late for that.

“I'm going to have to go get one of of those security guard's guns.  It looks like we might need a little more fire power.  Wait here and I'll be right back.”

“No way!  We're staying together.”

We went to the hallway in back.  At least the lights were off this time.  When we got back there, the damn lights came back on.  The first thing Gina saw was the little girl.  She started screaming.

“Gina, stop screaming.  Look at me.  Don't think of her as a little girl.  Think of her as a zombie.”  I took her by the shoulders and forced her to look me straight in the eyes.

Gina's breathing calmed down.  She took another look at the girl and saw the blood around her mouth and the heart lying next to her hand.  She nodded her head slowly and turned away.  I got the little guard's gun form his holster.  It was a nine millimeter.  His gun belt was covered in blood and gore so Gina didn't want it.  He did have two extra clips of ammunition so I took those too.  The big guard had two clips for his gun so I got those.

“We'll pick up the big guy's gun on the way back.  He dropped it at the other end of the hall by receiving.”

“You were right.  That was horrible.  Did you have to shoot Mary?  She was pretty ate up.  Wasn't she already dead?”

“Yeah, she was dead.  That didn't stop her from trying to eat me.”

“Honey, are you going to be alright?  You look kind of pale.”

“Whatever...tell you what.  If we get out of here alive, we'll see what happens.”

We each took a nine millimeter.  They carried more rounds and didn't kick as much as the forty-five.  I'd have to rethink my choice of weapons.  Shooting the forty-five caliber was like shooting a miniature cannon.  If I had to do that for a long period of time, my arms would fall off.  They were already sore as hell and the night was still young.  When we got up front again, I saw that we were going to have a problem getting out of the store.  There were at least twenty zombies out on the parking lot.  Standing at the doors, waiting to come in, were five more.

“Is that Bill and Linda out there?”  Gina asked.

Bill and Linda were regular overnight customers.  They were nice but sort of pains-in-the-ass.  They liked to stand around and talk to you for hours at a time like you had nothing else to do.

“Yeah, that's them.  At least they're still together.  We're not getting out of here without some help.  I'm going to have to call Al.”

“Al lives across the street from me.  He's an ex-marine and I guess you could call him a survivalist.  Al's got a huge bomb shelter in his back yard.  He came over the other day when I was having all our survival gear delivered and it turns out he knew about the zombies before Tim told me what was going on.  We're teaming up with him.”

“You said OUR survival gear?”

“That's right.  I planned on you joining me the entire time.  I hope the clothes I bought you fit.”

“Yeah, but I did get you some fatigues and tank tops.  Which may or may not be low-cut.”

I tried his cell but all the circuits were busy.  I kept trying but wasn't having any luck.  Meanwhile, the zombies were getting pretty stirred up.  They were trying to get to us through the windows.  I suggested we go up on the roof of the store and watch what was going on.  There was lots of traffic heading out to Highway 364.  The motor room was in back.  That was where the compressors were located that powered the coolers and freezers.  The roof hatch was located there.

We went up the steps going to the motor room and I climbed the ladder and unlocked the roof hatch.  It was a nice night out.  The skies were clear and there was a full moon out.  It would have been kind of romantic if not for all the noise.  You could hear sirens, gunshots, screaming, and constant moaning coming from the zombies outside the store.  I kept trying Al but kept getting the same results.  All the circuits were busy.

There were still too many zombies outside for the two of us to get to the Hummer.  Every time a car went by, they would start to go after it but would then turn back after the noise of the engine faded away.  It seemed like the ones outside knew we were here and wanted to get at us.  There got to be about forty of them milling around on the lot.  A police cruiser pulled up and two officers got out.  They started shooting the zombies but there were too many of them and the policemen were soon overwhelmed.  The zombies ripped them to pieces.  At least they wouldn't be coming back as zombies.  I wish we could have helped them but they were too far away to shoot with our pistols.

“If we try to get out of here, that's what will happen to us.”  Gina said.  “We'll never be able to get to your Hummer.”

When I started to try him again, my phone rang.  It was Al.

“Finally!  This goddamn phone sucks.  I've been trying to call you for hours.  Did you find your gal?”

“Yeah, she was here at the store and she's fine.  We're trapped at the store though.  Those fucking zombies are everywhere and we can't get to the Hummer.”

“I'm already on my way.  Unless the roads are blocked, I should be there in a minute. We'll see if we can thin the herd a bit.”

A few minutes later the U-Haul came flying onto the lot.

“How did you know that was him?”

“Oh, well, I may have been by your house a few times and saw that U-Haul parked in your yard.”

That Al could really drive.  He just kept making passes around the parking lot running over as many zombies as he could.  After about ten minutes, he'd smashed almost all of them.  Some weren't dead but they sure as hell weren't going to be chasing anybody any time soon.  Actually, it didn't seem that hard.  They wouldn't even try to get out of the way.  They would try to chase after the truck and just line up, waiting to be run down.

Gina and I went back into the store and went to the doors to let Al in.  He was parked right out front and was shooting the remaining zombies as he made his way to the doors.  The last two zombies he shot were Bill and Linda, my regular customers.  When I opened up to let Al in you could tell he was pretty proud of himself.  He was grinning ear to ear.

“Hey, man, it's good to see you.  We would have never made it out of here if it wasn't for you.  You coming in or are we leaving?”

“We're coming in.  There's somebody I want you to meet.”

He turned back to the truck.  “Come on out Cindy.  It's all clear.”

I didn't need any introduction.  Cindy lived up the street from Al and me.  She was the talk of the street.  Cindy was around my age, probably a little older and widowed.  All the wives on the street hated her.  It was most likely because up until two years ago, when Cindy cut her grass, she wore a bikini top and the tightest shorts she could squeeze her ass into.  I wasn't surprised at all that Al had brought her along.

Vanishing Point by Alan Moore
Franny and Zooey by J. D. Salinger
Aftermath of Dreaming by DeLaune Michel
Stairway to Forever by Robert Adams
The Twelfth Enchantment: A Novel by David Liss
The Wrong Rite by Charlotte MacLeod
The Sun in Her Eyes by Paige Toon
An Amish Match by Jo Ann Brown
Everlasting by Nancy Thayer
Behind Your Back by Chelsea M. Cameron