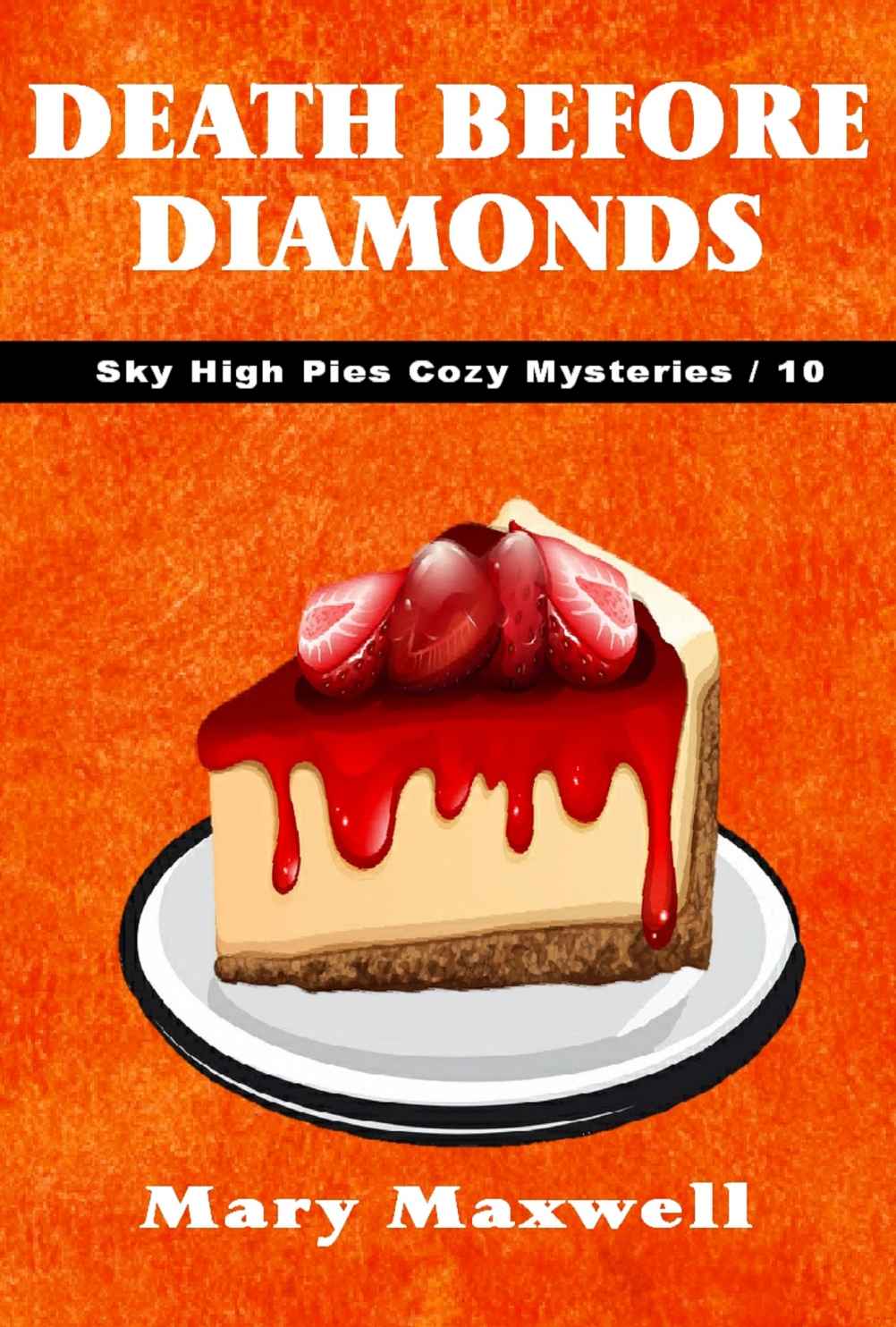 This is a work of fiction. Names, characters, places and
incidents are the product of the author’s imagination or used fictitiously, and
any resemblance to actual persons, living or dead, business establishments,
events or locales is entirely coincidental.

All rights reserved. No part of this book may be reproduced,
stored in a retrieval system or transmitted in any form or by any means
electronic, mechanical, recorded or otherwise, without the prior permission of
the author except for the use of brief quotations in a review.

I had just finished organizing the files
and envelopes on my desk when someone knocked loudly on the front door of Sky
High Pies, the bakery café that my grandmother first opened more than four
decades earlier in Crescent Creek, Colorado. I’d returned to my hometown after
a dozen years as a private investigator in Chicago to take the helm when my
parents retired and flew south to Florida.

It was five o’clock on a mid-September afternoon, two hours after closing time and mere seconds before I’d
planned to make my exit. Julia, our talented chef, and Harper, my childhood
friend and overseer of the dining room, had left around four-thirty.

For a brief moment, I hoped the
visitor would simply vanish. Then I could go upstairs to my cozy apartment and
pour the glass of merlot that would uncoil some of the strain from the hectic day.

Instead, they knocked again.

I pushed myself up from the desk
chair, instinctively grabbed my phone and headed for the front entrance of the
old Victorian. When I stepped into the foyer, I saw a tall, slim man on the
porch preparing to hammer on the door for a fourth time. He looked maybe
twenty-five or thirty, with short dark hair, a scruffy beard and mirrored
sunglasses perched atop his head. His jeans and down jacket looked new, but the
brown leather brogues he was wearing were badly scuffed and nicked.

“Hang on!” I called, sliding the
phone into my back pocket. “We had that glass replaced last month.”

As I unlocked the door, he stepped
forward and held up a flyer. My gaze fixed on two words at the top printed in vivid
white ink against a bright red banner:
MISSING PERSON
.

“Have you seen this man?” he asked.

My eyes skipped from the stranger’s
face to the photograph on the wrinkled sheet of paper. It showed a man in his
early thirties wearing a security guard’s uniform: starched blue shirt, dark
necktie and black pants. A gleaming gold badge was pinned to the left side of
his chest. His jet-black hair was slicked back with pomade and a neatly-trimmed
beard covered his square, muscular jaw. There was a name beneath the picture—
THEODORE
GREER
—along with a physical description and something that sent a twinge of
panic through my core:
Last seen at Sky High Pies,
Crescent Creek
,
Colorado
on September 6.

“He’s my older brother,” said the stranger
on the porch. “I think something bad may have happened to him.”

I blinked a few times, trying to recall
if I’d seen the man in the photograph during the past few days. When I shook my
head and began to apologize, the visitor put one hand on the door and pushed
gently.

“I need to come in and ask you some
questions,” he said. “My brother was last seen here at your café, so maybe one
of your customers knows something.”

Since I was alone and the stranger
seemed fairly agitated, I suggested that we sit in the rocking chairs on the
front porch.

“That’s fine with me.” His voice
was raspy and uneven, like someone in need of sleep and a cup of hot tea with
honey. “I’ve been walking around town all day, so sitting for a bit will be good.”

After we settled into side-by-side
chairs, I watched as the man clicked through a series of icons on his phone
before slipping it back into his pocket.

“It’s new,” he explained. “I’m not
used to…you know, all the tricks and shortcuts.”

“But I need to show you something
important,” he said. “I’ve got a picture that my brother took here last week
before he went missing. It proves that I’m telling the truth.”

The sudden mention of truth seemed odd,
but I attributed it to the stress and weariness that would accompany the
disappearance of a family member.

He frowned slightly. “I didn’t tell
you?”

Unlike the faltering cadence of his
speech, the man’s grip was firm and confident.

I waited for more, but he simply held
my gaze and smiled silently.

“Why do you think that your brother
came to Sky High?” I asked.

He patted his pocket. “Because the
picture was taken right here on your porch.” He gestured at the empty rocking
chairs along with the potted geraniums, asparagus ferns and jade plants. “I
checked the geotag details on the picture and—”

“Sorry,” I interrupted. “What kind
of details?”

“Geotag,” Rex said again. “Whenever
you take a picture with your smartphone, it imbeds a bunch of EFIX data that—”

“Hang on,” I cut in. “I hate to keep
stopping you, but can you translate all of that for me?”

One corner of his mouth lifted
slightly. “Sure thing,” he said. “Basically, my brother took a selfie right
here and the phone captured the GPS coordinates and put them in the EFIX data.”
He paused and the faint grin expanded into a full smile. “I won’t go into what
those initials mean, but the data told me exactly where and when Theo took the
picture.”

“Can that information be
manipulated?” I asked. “Like by a hacker or something?”

“Well, yeah. But who’s even looking
at the pictures on my brother’s Facebook page?” He raised his eyebrows. “Besides
me, of course. That’s how I got the geotag details.”

“And that single photograph is
proof that your brother was here in Crescent Creek?”

“Yes,” he answered. “And I’d show
it to you if I could figure out how to make my new phone work.”

“No, I’ll figure it out later.” His
cheeks flushed red and he diverted his gaze to a spot in the distance. “I’m
really good with technology, but not when I’m nervous,” he added, shifting his
eyes to the muscular hands pressing against his legs. “The manual is out in the
car.”

I glanced at the nearby parking
area. A dark blue two-door sedan with Pennsylvania plates sat at the end of the
stone walkway that led from the asphalt to the front steps.

“Are you nervous now?” I asked.

He took a deep breath, sat up in
the chair and squared his shoulders.

Since it was the first reference, I
asked about Mr. Headley.

“What do you want to know?” Rex
said, knitting his fingers into a rigid knot in his lap.

“Someone who’s supposed to help me
straighten things out,” Rex replied. “He’s back in Philly.”

“You came to Colorado from Philadelphia?”

“Three days ago,” he said. “I have
a friend in Denver. I’m staying at his place while I look for my brother.”

A series of questions rushed
forward in my mind. Questions about the stranger beside me. About his uneasy
manner. And about the possibility that Sky High somehow played a role in his brother’s
disappearance.

“When was Theodore here?” I asked,
deciding that the answer could provide a starting point for the rest of our
conversation.

“He goes by Theo,” Rex answered.
“And it was on the sixth at exactly eleven-eighteen in the morning.” A hurried
smile appeared briefly. “I remember that from the time stamp on the picture.”

“The one that he took on our porch?”

Rex nodded. “Down there,” he said,
pointing at the far end of the spotless wooden expanse. “He was sitting in the
last chair. And she was walking up behind him.”

My eyebrows lifted. “She?”

“Uh-huh. The woman he was meeting
here.”

“Is it someone that lives in
Crescent Creek?” I asked.

“I don’t know.” He scowled and
shifted on the seat. “Theo’s note just said that he was meeting someone.”

Rex uncoiled his fingers and sat
back in the chair. “Because,” he said. “My brother also mentioned something
about ‘she’s late as usual’ in his—”

A furious electronic squeal
suddenly erupted from inside his jacket.

“I hate this thing!” he yelled as one
hand plunged into a side pocket. “I accidentally set the alarm, but I can’t
figure out how to turn it off!”

He pulled out with the bleating
phone, holding it aloft as if to prove a point.

“No!” Rex said firmly. “Mr. Headley
believes we should be self-sufficient as much as possible.”

Without warning, he got to his
feet. I quickly followed behind as he headed toward the steps.

“It’s too loud!” he said, fumbling
with a set of car keys. “I need to figure out how to make it stop.”

While he rushed down the staircase
and headed toward the blue sedan, I stayed on the porch.

“Are you coming back?” I called.

He abruptly stopped and spun
around.

“Not today,” he said. “But can I
send you the picture of my brother?”

I reached into my pocket for a
business card, but realized that I’d given my last one to a customer earlier in
the day.

“Do you want to write down my email
address?” I asked.

Rex smiled. “I already have it,” he
said. “I called here yesterday and talked to someone else.”

His smile intensified. “Yes, she’s
real nice. She gave me your email because I was originally just going to write
you a note. But then my friend said that I could borrow his car and drive up
from Denver.”

“It’s okay.” His shoulders lifted with
a timid shrug. “I’ll send you the picture after I figure out how to work the
phone. Maybe somebody will remember seeing my brother.”

The grin faded as the alarm on his
phone began to ring again.

“See?” he groaned and hurried
toward the parking lot. “It keeps blaring like that for a really long time!”

I paused on the top step, glancing
at the car again and making a mental note of the license plate number.

“Maybe you could put the phone in
your car,” I suggested, starting down the stairs. “Then you can come back and tell
me more about your brother.”

But by the time I’d reached the
bottom step, the blue sedan’s engine was roaring to life and the curious
encounter ended with screeching tires and a half-hearted wave from the fretful visitor.

Where Light Meets Shadow by Shawna Reppert
Ghost of a Smile by Simon R. Green
Roman: Book 2 (The Hunter Brothers Series) by L.J. Dee
Fire in the Blood by Robyn Bachar
A Natural Act (Contradictions) by R. J. Sable
Final Epidemic by Earl Merkel
The Rock by Chris Ryan
The Dead & Dying: A Zombie Novel by William Todd Rose
Destruction of Evidence by John, Katherine
A Widow's Guilty Secret by Marie Ferrarella