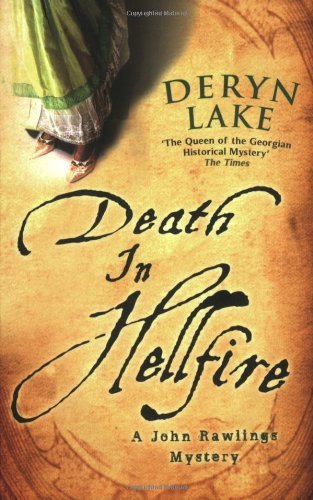 First published in Great Britain in 2007 by

This book is sold subject to the conditions that it shall not, by way of trade or otherwise, be lent, resold, hired out or otherwise circulated without the publisher s prior written consent in any form of binding or cover other than that in which it is published and without a similar condition being imposed upon the subsequent purchaser.

DERYN Lake is the pen name of the popular historical novelist Dinah Lampitt. Born in Essex and raised in London, she trained and worked as a journalist on a variety of magazines as well as on Fleet Street. She married and had two children before writing her first book. Fascinated by history, she researches her subjects thoroughly and packs her books full of accurate details. She currently lives close to the battlefield of 1066.

In the John Rawlings series

Death and the Cornish Fiddler

Death in the Setting Sun

Death in the Valley of Shadows

Death in the West Wind

In the John Rawlings series

Death in the Dark Walk

Death at the Beggar’s Opera

Death at the Devil’s Tavern

Death on the Romney Marsh

Death in the Peerless Pool

my friend and co-researcher.

I owe this book entirely to two doctors: Dr Ann Ferguson and Dr Peter Heaney, both of whom were speakers at the Crime Writers’ Association Conference in 2006. Dr Ferguson is an expert on curare and was able to tell me all about its introduction into this country and the symptoms it would produce. She did all this while suffering from a detached retina herself so I owe her a special debt of gratitude. Dr Heaney told me all about the Great Pox or syphilis and was generally a great help when I telephoned him and asked him medical questions. Thank you to both of them.

I also owe a debt of gratitude to Beryl Cross, a descendent of Pierre Langlois, who was able to tell me all about her ancestor and his son-in-law, Dominique Jean, including details of the sums of money owing to them.

Thanks are also due to Keith Gotch for his assistance with the state of the bodies, to Nick and Jane Ray for their kind hospitality, and to Teressa Tedman, manager of the gift shop at the Hellfire Caves at West Wycombe. She was very considerate and courteous and made me feel most welcome.

T
he sound reverberated round the room, filling each corner and growing in intensity as it did so. It was an infectious noise, the sort that one wanted to join in with. So much so that John Rawlings put back his head and laughed, loud and clear, delighted to blend his humour with that of the Blind Beak himself, Sir John Fielding.

The two men were sitting in Sir John’s upstairs salon, the shutters back and the noises and stinks of the street rising undaunted into the room above, yet unable to dispel the atmosphere of bonhomie which seemed to pervade the entire building.

Eventually, Sir John raised his black bandage and wiped his sightless eyes with a large handkerchief, saying, “Damme, Mr Rawlings, I haven’t had such a chuckle in an age. ‘Tis a fine thing that you have returned to London. Indeed it is.”

“But now you have returned to us. And most welcome you are. Tell me, how is Rose?”

“I sent her to Kensington for a fortnight but she is back with me at the moment and blooming like her namesake.”

“I presume she was with Sir Gabriel?”

Sir Gabriel Kent, John’s adopted father had become an almost legendary figure, partly because of his habit of dressing in stunning ensembles of black and white - black and silver for high days and festivities - and partly because of his great age. The man whom John regarded more highly than any other person alive was now in his eighty-third year and as lively and spry as ever, his great delight being when his five- year-old granddaughter came to stay with him. Picturing them together in Sir Gabriel’s garden in Kensington as they examined a flower, Rose’s red head leaning close to that of her grandfather, who insisted on wearing an extremely old- fashioned three-storey wig, made John smile. Fortunately the Blind Beak could not see him and busied himself with pouring out two glasses of summer punch. He handed one to John as deftly as if he were sighted.

John smiled to himself. He was back in London and the month was July, the year 1767, and despite the fact that he was now parted from Elizabeth di Lorenzi - perhaps permanently - he felt happily resigned to his fate. It was good to have returned to his old way of life.

The Blind Beak rumbled another laugh. “I hear from your silence that you are not enthusiastic.”

“I’d hardly say that, Sir John. I was waiting to hear what the favour was.”

There was a pause while John Fielding drank a goodly draught. Then he said, “You know that last year a new Postmaster General was appointed?”

“Sir Francis Dashwood? A friend of Wilkes’s I believe.”

“Indeed he is. And that is one of the reasons why I want you to investigate him.”

“Investigate, eh? Is it your opinion that he is up to no good, sir?”

Sir John paused. “That I don’t know. But certain rumours have reached my ears.”

“Of a most profligate nature. Apparently Sir Francis runs some kind of club close to his home at West Wycombe.”

John sat silently, thinking. John Wilkes had been a thorn in the side of the established order since he had first appeared on the political scene several years previously. Born in 1727, the man had been elected a member of parliament for Aylesbury at the age of thirty, having previously served as Fligh Sheriff of the county of Buckinghamshire. Violently opposed to the monarch-ridden government, he produced a paper called the
North Briton
in which he flayed them with scurrilous attacks. In issue Number 17, published on 25
th
September 1762, Wilkes launched a broadside at the painter William Hogarth, who had been appointed sergeant-painter to George III, using the words, “I think that this term means what is vulgarly called housepainter.” Hogarth, by way of revenge, produced a cartoon of Wilkes with his wig shaped like the Devil’s horns and a saturnine expression on his face. On seeing the cartoon, George III exclaimed, “That devil Wilkes”, a description which had been made of the man ever since.

Eventually, nothing daunted, in 1763 Wilkes produced a blasphemous and pornographic publication entitled
Essay on Woman
which Lord Sandwich, himself a rake of notoriety, insisted on reading aloud to the House of Lords in a tone of pious horror. After each stanza he paused dramatically and apologised to their lordships for scandalising their sensibilities. To which the assembled peers cried out, “Go on! Go on!” The upshot was that at Christmas of that same year Wilkes travelled to France - some said to see his daughter, others that he had gone to recover from a duelling wound, perhaps a combination of both - and had stayed there ever since. The thorn had been removed though nobody knew for how long. Now, though, it seemed that his former friend, Sir Francis Dashwood, was giving cause for concern.

John looked at the Blind Beak, who had relapsed into one of his customary silences.

“You were saying, sir?” he prompted politely.

“Yes, indeed. I was wondering exactly what goes on in this club in West Wycombe. Whether sedition is preached. Or whether, as seems more likely, it is merely a place for sexual pastimes. But take a look at this, if you would. It is a previous list of members which has come into my keeping.”

John glanced at the piece of paper which had been handed to him.

“Sir Francis Dashwood, Lord le Despencer,” he read. “The Earl of Sandwich, First Lord of the Admiralty; Thomas Potter, son of the Archbishop of Canterbury.” His eye flicked to the bottom of the list and saw, “John Wilkes, MP; William Hogarth, Painter.”

One of the Apothecary’s eloquent eyebrows rose. “A motley crew indeed.”

John Fielding raised an expressive shoulder. “But also the cream of society, wouldn’t you agree?”

“Indeed I would. But the list must be fairly old. Hogarth is dead and Wilkes is in exile.”

“Certainly. But nevertheless it shows the calibre of the people who joined the wretched organisation.”

John looked thoughtful. “And you want me to find out all I can about it.”

“I do. If that is agreeable to you, of course.”

The Apothecary appeared momentarily weary. “I was just about to release Nicholas Dawkins from the shop and send him to Kensington.”

The Blind Beak looked magnanimous. “Dear Nick. That was a good day when I asked you to take him as an apprentice.”

John Rawlings smiled, remembering. The Muscovite - as Nicholas was known because of his exotic Russian ancestry - had been a thin, pale youth when the Magistrate had suggested that John might like him as an apprentice. Somewhat reluctantly, the Apothecary had agreed. But his doubts had been totally allayed. Nicholas, now no longer under indentures but a qualified apothecary in his own right, had proved himself both a worthy pupil and also a staunch and loyal friend.

Sir John spoke again. “I hear the doubt in your voice, Mr Rawlings. Would you rather that I ask someone else?”

John hesitated, part of him longing for time at home with his daughter, the other more than aware of the adventure that such an enterprise could involve. After a few moments of silence, he said, “No, sir, I would like to discover more about the Hellfire Club on a personal level. You have intrigued me with what you have to say about it. I shall go.”