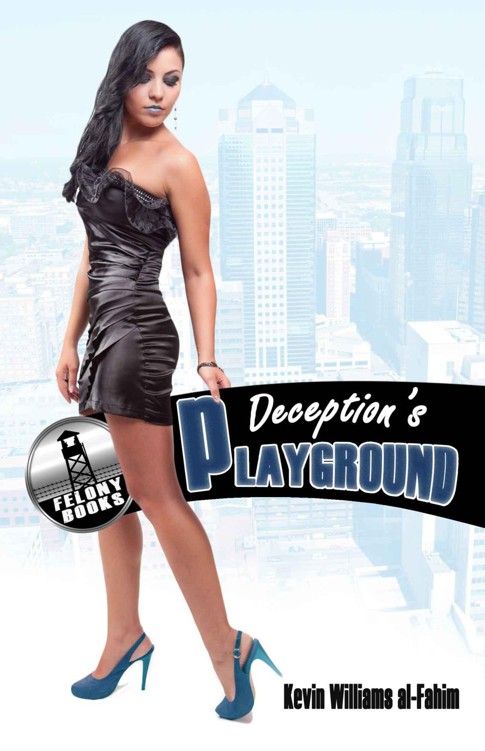 This book is a work of
fiction. Names, characters, places, and incidents are products of the author’s imagination
or are used fictitiously. Any resemblance to actual events or locales or
persons living or dead is entirely coincidental.

All rights reserved,
including the right to reproduce this book or portions thereof in any form
whatsoever. For information address Felony Books, P.O. Box 1577, Belton, MO
64012.

For information
regarding new and upcoming titles, please contact Felony Books at
www.felonybooks.com

First
and foremost, all praise is due to Allah. I seek his help and ask for his mercy
for my shortcomings.

I
also want to thank Mr. Jordan Belcher. Right on for giving me a platform to
express my literary talent. Insha’Allah the brand will flower accordingly.

To
my readers, thank you for your support and I hope I don’t disappoint. Enjoy!

I was heating up my hot
pot, getting ready to make a meal with my celly, when I was briefly
interrupted.

After she slid my mail
under the cell door, the bitch rolled her eyes and took all three-hundred
pounds she was carrying on her frame down the walk. I bent down to get the
precious cargo and noticed the name “Casey Thomas” on the front of the
envelope.
Goofy ass bitch
, I thought.

As I dwelled on the
stranger who decided to send me a scribe, I laughed in disbelief and caught my
celly’s attention with my laughter.

“She must’ve heard you
‘bout to touch, my nigga.”

“No good. I forgot her
ass even existed. You know how these hoes do. Out of sight, out of mind. As
soon as they hear a nigga ‘bout to touch, they reappear like a magic trick.”

And we did just that.
We made our special—tuna with broccoli cheddar rice pizza. Ingredients: normal
Ramen noodle soups, crackers and refried beans for the dough; layered with the
broccoli cheddar rice and tuna, topped off with melted cheese, ranch dressing,
picante sauce and crunched up hot chips. Pretty decent eating considering the
circumstances.

We finished that off,
shot the shit for a hot second and went to our individual routines. My celly
was reading while I was taking some power notes, putting my game plan down for my
return to the blacktop.

I’d been locked up for
seven years. I came down when I was eighteen years old. I was twenty-five now
and I had a new perspective on life.

I realized the game I
loved so much … didn’t love me in return.

It’s funny because
during my teenage years I thought I knew it all. I thought my niggas was solid
and my main chick, Casey, was as loyal as they came. The seven I’d spent in the
D.O.C. told me I was the smartest fool around. My so-called niggas showed me
the least amount of support. And Casey didn’t support me financially or
emotionally.

My nigga, Duece, had
been the only homey in my corner. Real stand-up nigga. Him and random females
had kept a nigga cool on this iron vacation.

I had two weeks before
I was going to be released from this hell hole, and I couldn’t wait. The apex
was my destination.

I was laying in the bed at my temporary
abode at Embassy Suites, watching a wonderful show being performed on the part of
my body that had a mind of its own. Then my phone rang.

“You like that, papi?”
the Spanish mami asked me, as she was feeding on my meat.

Duece heard her.
“Nigga, you stay wit’ a bitch.”

“She’s not a bitch,
she’s my bitch. And I’ma be there in a hot second,” I told him before I hung
up.

The wonderful creature
before me continued doing wonders with her mouth. Speaking Spanish periodically
as she came up for air, kissing the head. She knew from my phone call I
wouldn’t be fucking her at this hour. So she wanted to spend as much time as
she could tasting me.

She did her signature
kiss to the head of my dick afterwards, telling him she’ll miss him and she’ll
see him soon. Then she sashayed to the bathroom to get herself together.

I followed behind her
shortly after, grabbed a face towel and lathered it with soap to wash her
saliva off my dick.

“Let me do it, Spade,”
Maria said after spitting the mouthwash in the sink.

“Yeah, let you do it
and next you’ll be trying to suck the life out a nigga. No good, baby.”

She rolled her eyes and
jumped in the shower. I watched as the Mexican goddess got herself sudsy with
the sponge. She was five-two, hair down to the middle of her back, hour glass
figure—and she was sexy as hell. Aside from my name permanently inked across
the small of her back, her skin was flawless.

“Okay, Daddy. I love
you. Don’t keep me waiting too long.”

I went back to the bed
area and got dressed. I grabbed my keys, phone, and my life insurance policy.
Then I was out the door.

I pulled up to Duece’s spot at about
10:15 p.m. He stayed in Belton, Missouri, in a quiet neighborhood. He always
said Kansas City was too hot for niggas like us to lay our heads. And I
couldn’t agree more. Don’t get me wrong, I love my town. But at thirty years
old, I refused to have my primary residence in the city.

Had too many demons.

I noticed Ace’s car parked
behind Duece’s when I bent the block. I called Duece and told him to unlock the
door. I parked, jumped out the whip and headed in.

“What’s good, big
homie?” Ace greeted as I walked in.

“Hopefully this package
yall got from Kutz,” I replied. We embraced in a hug.

“This shit is right,
Spade. I had my lil’ chick put some up the vacuum, butter baby.”

“Is that right? What
chick?”

I wanted to chew his ass
out for putting a bitch in our mix, but this wasn’t the time. I noticed Ace
looking at me like he agreed with my unspoken logic. Ace was the lil’ homie,
only nineteen. He probably thought if he said something to Duece about the
bitch testing it, Duece would blow him down.

I’m hip
,
I thought to myself. I met Kutz one year after I got out of prison, through my
OG partna, OG Casa. He started off fronting me a few bricks. I got back with
him asap, and it’s been rotating ever since. I stacked my peanuts and started
copping straight up. I’ve always had hustle so getting it off wasn’t a problem.

I eventually brought
Duece in; and shortly after that my lil’ nigga Ace. Duece has been in my corner
since we were kids. And I saw how determined Ace was when I used to throw him
four-ways when he was about sixteen. I also saw myself in young Ace, so I kind
of took to him.

When Kutz told me I
could start paying ten grand a kick six months ago, I was a little skeptical.
What
can I say; I have trust issues with muhfuckas
. But Kutz had always kept it
one-hunid wit’ me. Once we agreed on the ten grand a brick, it was on.

Now we were sitting on
ten yickens. Kutz had his hundred grand up front. I didn’t need anyone
breathing down my neck for currency. I could have paid the whole one hundred
grand myself, but I believe in letting my niggas eat with me. So I put in fifty
for five bricks, Duece put in thirty grand for three bricks, and Ace put in
twenty grand for two bricks.

I only had two
customers that I fucked with period. Duece had a handful of people he dealt
with. And Ace supplied the hood with zips, four-ways and even broke down a few
zips for his piece serves.

“Yo, five right there,
bro,” Ace told me, pointing to a black backpack on Duece’s leather couch. I
opened it to make sure my issue was in there. Like I said, I have trust issues.

“So what you ‘bout to
do, Duece?” I asked, interrupting his phone call.

He told the person on
the line to hold on before he took it from his ear. “Shit, I’m ‘bout to bend a
couple corners.”

I asked Ace if he was
about to hit the turf and he gave me a knowing smile. “A’ight, I’m ‘bout to
shake,” I said to them. “I’ll get wit’ you niggas in a minute. Pleasure doin’
business wit’ you gentlemen.”

Missing in Mudbug (Ghost-in-Law Mystery/Romance Series) by DeLeon, Jana
Guarding a Notorious Lady by Olivia Parker
Lost by Joy Fielding
Lucky Logan Finds Love by Barbara Cartland
Dawn in My Heart by Ruth Axtell Morren
A Longtime (and at one point Illegal) Crush by Janette Rallison
The White Trilogy: A White Arrest, Taming the Alien, The McDead by Bruen, Ken
The Rock Jockeys by Gary Paulsen
King of the Asheville Coven: Harper's Mountains Vampire Romance by T. S. Joyce
The Hunting Dogs by Jorn Lier Horst