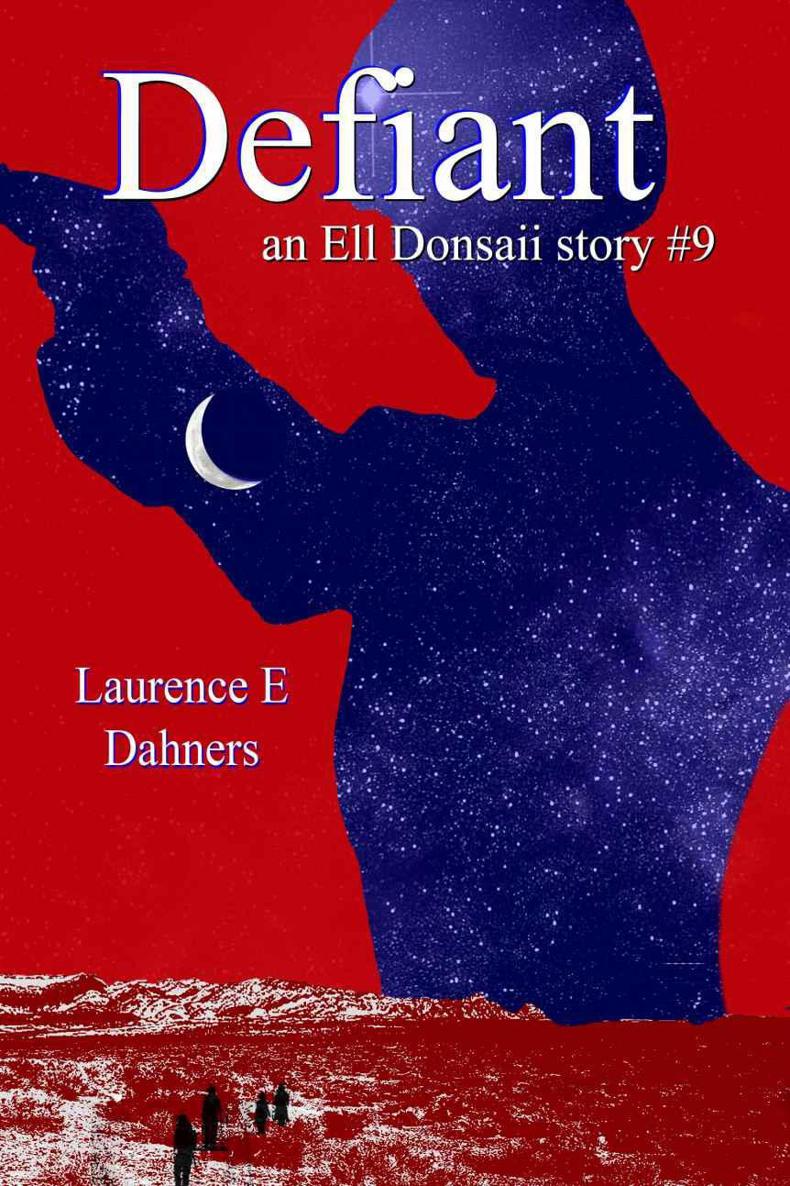 “Habitats (an Ell Donsaii story #7)” and

I have minimized repetition of explanations that would be redundant to the earlier books in order to provide a better reading experience for those of you who are reading the series.

This e-book is licensed for your personal enjoyment only.

Allan Donsaii was an unusually gifted quarterback. He was widely recognized to be startlingly strong and a phenomenally accurate passer. During his college career he finished two full seasons
without any
interceptions and two games with 100 percent completions. Unfortunately, he wasn’t drafted because the pro teams felt he was too small.

Kristen Taylor captained her college soccer team and was extraordinarily quick. She rarely played a game without a “steal” and usually had many.

Allan and Kristen dated more and more seriously throughout college and married at the end of their senior year. Their friends teased them that they were only marrying so that they could start their own sports dynasty.

Their daughter Ell had Kristen’s quickness, magnified by Allan’s strength and accuracy. The child
also
had a new mutation affecting the myelin sheaths surrounding her nerves. This mutation produced nerve transmission speeds that were nearly double those of normal neurons. Nerve impulse transmissions being faster, she had
much
quicker reflexes. Yet the new myelin sheath was also thinner, allowing more axons, and therefore more neurons, to be packed into the same sized skull. These two factors resulted in a brain which had more neurons, though it wasn’t larger
and
a more rapid processing speed, akin to a computer with a smaller scale CPU architecture that enables faster processor speeds.

Most importantly, under the influence of adrenalin in a “fight or flight” situation, her nerves would transmit even more rapidly than their normally phenomenal speed.

New York— Senator Edith Blaustein (R- NY) with the support of Francis Ementhal, renowned astrophysicist from the Center for Cosmology and Particle Physics at NYU, have submitted a bill aimed directly at Ell Donsaii. This legislation would require Dr. Donsaii to turn over all methods and equipment used in their exploration of the third planet of the star Tau Ceti.

Ementhal says that the methods used to send probes to the stars represent a technological leap forward that
must
be made available to the entire human race. He says it also “borders on the insane that a girl, only twenty-four years of age, is acting as de facto ambassador for the human race in our initial interactions with the other inhabitants of our Universe.” He proposes that a new national committee would be put in charge of alien contact.

Kant Fladwami entered the Oval Office and took the seat indicated by President Flood. Attorney General Aaron Blythe and Secretary of Defense Amundsen, a holdover from the previous administration, sat in the other chairs. Flood turned to Fladwami, “Kant, in our conversations you’ve recommended that we not pressure Donsaii to release her interstellar tech to Ementhal’s proposed committee of eminent scientists. So far I’ve agreed with you, but now that Ementhal has got Blaustein taking a bill to Congress we’re going to have to do more than ‘just say no.’ I wanted to have you review your rationale with me again. Aaron will hopefully apprise me of the legal ramifications.” He waved at Amundsen, “And I’d like Mark’s opinion too. He’s known Donsaii a lot longer than either of us, and after all, he’s the one that would be responsible for defending us if she does bring the Huns from outer space down on us.”

Kant took a deep breath and glanced at Amundsen. “Well, the issues are tremendously complex. I take Ementhal’s point that encounters with possibly inimical alien races carry tremendous risk, not just for the United States, but for the human race in general. Where he and I differ is in regards to the question of
who
best should curate these endeavors and risks. Ementhal contends that a committee of brilliant scientists—to which, I would point out, he has
had
to add politicians in order to get the support of Blaustein and Congress…” Kant shrugged, “In any case, a committee… of hopefully brilliant people. He feels such a committee is needed to avoid the possibility of a faux pas in our interactions with an alien race.” Fladwami looked from the President to Amundsen and sighed, “Gentlemen,
I
do not trust committees. In the face of a need for urgent decision, they are often extraordinarily clumsy. I suspect that in such endeavors secrecy may sometimes be necessary, and that such a committee could not be relied upon to maintain that secrecy. Personally, I would prefer to rely on
one
brilliant person; a person already awarded the Medal of Honor and the Medal of Freedom for exemplary service to our country.
I
trust Ell Donsaii, whereas no matter how such a committee might be formed, I will never be able to fully trust it.”

Amundsen opened his mouth to speak but Fladwami put up a hand to forestall him. He said, “One more point, Mark. I don’t think that Donsaii is
willing
to turn the equipment or the methods over to such a committee. She won’t trust them any more than I do. Trying to force her to release that tech might backfire in the worst way.”

“Backfire,” Fladwami said emphatically. “Donsaii has singlehandedly advanced technology and created wealth at a faster pace than any other individual in history.”

“Wait a minute,” Blythe interjected, “all I hear about is how she’s
destroying
the economy.”

“Well,” Fladwami chuckled, “she’s certainly
disturbed
the economy. With so much change there will, of course, be people losing their jobs. Railroads took jobs from drovers, electricity took jobs from lamp salesmen, and the internet destroyed newspapers. We don’t have milkmen anymore either. Now Donsaii’s PGR chips are turning the telecomm industry upside down and her ports are revolutionizing transportation. But… they’re letting us do things better… and cheaper… so the people who
do
have jobs can buy things cheaper. The ‘woe is me’ people aren’t pointing out that industry is booming as more and more uses are found for this new technology. Actually, people are being hired in droves. Sure, some people have lost jobs, often jobs they’ve held for a long time and that they treasure, but unemployment is actually dropping. We should also recognize that the burgeoning exports of her technology have recently given the U.S. a positive balance of trade for the first time in a long time.”

Flood interrupted, “This discussion of the economy is interesting, but doesn’t have much bearing on the question of whether or not we should be letting one person control our ‘first contact’ with other intelligent races out there.”

Fladwami quietly but emphatically said, “It
is
relevant if we piss off the goose that’s been laying the golden eggs by trying to
force
her do something she feels is unethical.”

Blythe raised his eyebrows, “Unethical? Why would she feel it’s unethical?”

Fladwami snorted, “Speaking to me, she’s likened giving
that
committee control of first contact, to handing a gun to a three year old.”

Blythe stared, “But you don’t give a gun to a psycho either! How can we leave said gun in the control of a single individual!”

“You haven’t met this individual have you?”

“So can an entire committee, or even an entire country under the sway of a charismatic leader. Look at Nazi Germany. There are plenty of other examples.”

President Flood cleared his throat, “I propose that we invite said young lady up for a discussion of the issues. I want to hear directly from
her
the rationale for not wanting a committee to be in charge and discuss other options she may feel are reasonable… Besides, I need to congratulate her before the nation for what she just did in the Olympics.”

“You can say that again…”

“Ms. Donsaii, Ms. Donsaii!” the reporter in the press pool waved his hand.

“We’re all aware that none of the medical or drug testing done on you has found any banned substances, but how
do
you explain your ability to perform at a level so much higher than even the world’s most elite athletes,” he shrugged, “like those who have attended and competed at these Olympics?”

“I’m afraid I don’t know.” Ell grinned at him, “I can assure you that I haven’t found some magic, undetectable drug that lets me run fast. My parents were both very athletic, but so were the parents of many of the athletes at these Olympics. My leading hypothesis is that somehow my nervous and musculoskeletal systems, by the luck of the draw, have
every one
of their gene selections fall at the extreme end of choices that give up endurance for speed.” She laughed, “I assure you I’m a
terrible
endurance athlete. I’d never be chosen for anyone’s long, or even their middle distance track team.” She pointed to another reporter.

“How does it feel to have proven Michael Fentis wrong after all those times he said you couldn’t actually have run that fast?”

Ell gave a wistful look, “Kinda sad, actually. Mr. Fentis is an amazing sprinter who rightfully took great pride in his accomplishments. I’m embarrassed and ashamed that I was petty and prideful enough to set out to prove him wrong.”

An enormous crush of reporters and paparazzi waited outside the exits from the Track and Field facilities. Each had their own reasons for choosing the exit they believed that Donsaii would leave through, though some were members of teams that had multiple exits covered. Aware of her propensity to wear ball caps and hoodies to cover her signature strawberry blond hair, every light skinned person wearing such was subjected to intense scrutiny.

No one noticed the slender dark-skinned girl with the spiky black hair and beaky nose that slipped from one of the smaller exits and looked curiously around at the AV-equipped crowd. She crossed the street, hopping on a bus before it made its turn to head back out toward the hotels. Taking a seat, she leaned her head against the window and was gone.

Salah boarded the bus away from the Olympic venues and nearly sat next to another man before he saw the girl. She had on a snug t-shirt and jeans. With a smile he slid into the seat next to her, “Hello,” he said, gazing at her breasts and noticing the odd design on the front of her shirt. It had a red circle with a slash through it, over a hand. “What’s the meaning of your shirt?” he asked, sliding a hand down between their legs so it rested against her thigh. A nice firm thigh he noticed with some delight.

Her hand followed his down between their legs and onto his hand. “It means,” she said, “keep your hands to yourself.” She grasped his index finger and started bending it backward,

Salah reached over with his other hand and grabbed at her wrist, “Hey! What are you doing?!” The girl was astonishingly strong!

Despite his grip she continued to turn his finger back until it really hurt. Trying to take the stress off of it, he slid off the seat and crouched to his knees.

Looking at him with icy green eyes, she said, “If I let go, will you keep your hands to yourself from now on?”

She let go and he shook his hand out with some relief, but also growing anger. She’d brought it on herself, after all, dressing like a sleazy tart! Tight shirt and pants, spiky hair, colored contacts! How did she have the gall to disrespect
him
for acting in a fashion she’d as much as asked for? The bus bumped along, stopping here and there. Salah’s temper rose. Inside he fumed with a desire for revenge. Then she taunted him by cheerfully, as if nothing had happened between them, getting up and saying, “This is my stop.”