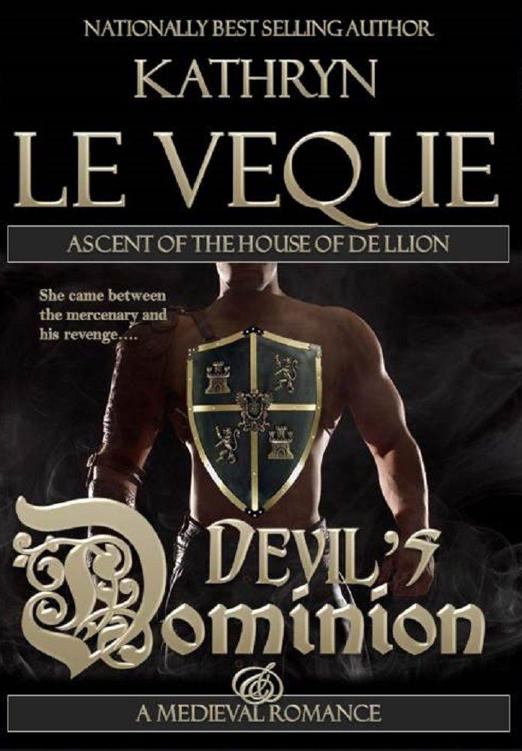 Reproduction of any kind except where it pertains to short quotes in relation to advertising or promotion is strictly prohibited.

Other Novels by Kathryn Le Veque

Lastly, it’s dedicated to my fabulous editor, Scott Moreland, who goes above and beyond every time.

And to my readers... it’s dedicated to you, too! Without you, none of this is possible!

A bonus chapter from THE DARK LORD with Jax de Velt.

A bonus chapter from RISE OF THE DEFENDER with Christopher de Lohr.

“The gatehouse has been breached!”

The small lad heard his mother issue the words, such panic pouring out of her mouth that it was difficult to understand her. Terror vomited out of every pour in her body. But the small lad understood little of what was causing her such fear. All he knew was that he and his sister and mother had been locked up in the keep of Four Crosses Castle, a castle that had belonged to his family for generations, for two straight days. Food was running in short supply and he had been hungry all day because of it. A little bread and cheese was all his mother had been able to give him and his sister that morning and they’d had nothing else since.

He also knew that there was a great siege going on, great projectiles and war machines trying to break down the walls of Four Crosses, and they couldn’t chance opening the keep in any fashion, not even to accept the wounded that had been shoved into the stables, stables that were now burning. The wounded were burning even as men struggled to move them out of the stables, filling the air with the heavy, greasy smell of burning human flesh.

But the young lad didn’t know what the smell was; he just knew it made his nose wrinkle up. It also made his belly ache, like he wanted to vomit forth but couldn’t. After two days of little food, there wasn’t much to come up anyway.

“Come, Bretton,” Lady Brethwyn de Llion grasped her five year old son by the arm, pulling the boy along as she ran for the chamber door. Her daughter, two years old than Bretton, delayed them slightly by going to grab her poppet, causing her mother to scream. “Ceri,
come
! Come now!”

The little girl scrambled after her mother and brother, following them out of the chamber and down the dark, narrow stairs that spiraled to the next level. There were servants on that level, waiting for them in the darkness, men and women who were weeping and whispering fearfully. Once Lady de Llion reached the group, she gestured frantically to the small hall off to the left.

“Down into the kitchens below and out through the postern gate,” she hissed. “Hurry! There is no time to waste!”

She dashed off, dragging her children along behind her as the servants followed in a panic. It was a great rush into the small hall with its tall hearth and hungry dogs, and on to the trap door cut into the floor that led by ladder to the kitchens below. The trap door had been propped up, tied off with a piece of rope to hold it firm. Lady de Llion put her children on the ladder first, helping them down, as the servants hovered around them and pushed their way onto the ladder once Lady de Llion followed the children.

Even though they had been frenzied, the group had been orderly until a great banging was suddenly heard upon the keep entry door. Like terrified animals, everyone froze for a moment, listening, realizing quickly that it was the enemy army attempting to break their way into the keep. Order dissolved and the servants began shoving each other out of the way, making their way down the ladder, pushing and falling through the hole into the kitchens below. One of the servants, an old man who tended Lord de Llion, fell on top of Ceri.

The little girl was nearly crushed beneath him and Lady de Llion screamed, kicking the man off her daughter and gathering the child into her arms. Ceri was nearly unconscious, badly injured, and cried out when she tried to breathe because it hurt. Lady de Llion was beside herself as she kneeled on the dirt floor, clutching her child against her.

“You fool!” she screeched at the servant, who had broken his arm in the fall. “You have killed her! Damn you!”

The old servant was weeping at what he had done, holding his broken arm against his body in a painful gesture. Bretton stood next to his mother, watching the situation with big eyes, having no real idea what had happened but knowing now that the ordeal was becoming increasingly frightening. They were running, running from something terrible. It was something terrible that they had feared for two days and the terror was tangible now, worse than ever. He could nearly taste it. He wanted his father, a man upon whom all things calmed and comforted. He missed him. He tugged on his mother’s arm.

Lady de Llion wept, clutching her daughter in one arm and reaching for her son with the other. She thrust the boy towards an older woman.

“Rosalie, take him,” she begged. “Take him and run. Take him far, far away from here and do not return, no matter what. Do you understand me?”

The older woman with the missing teeth grasped the boy, who was more intent on staying with his mother. In fact, he fought against the older woman for the privilege.

“Aye, my lady,” the older woman said, finally picking the boy up, who was kicking and screaming. “But you must come. Stand up and carry the lass! We will all help you!”