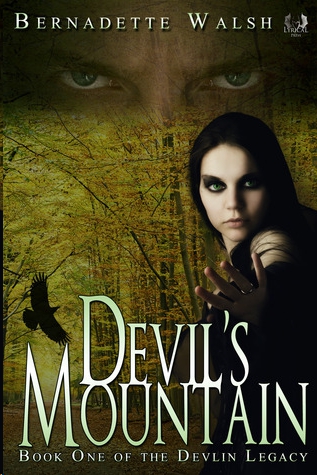 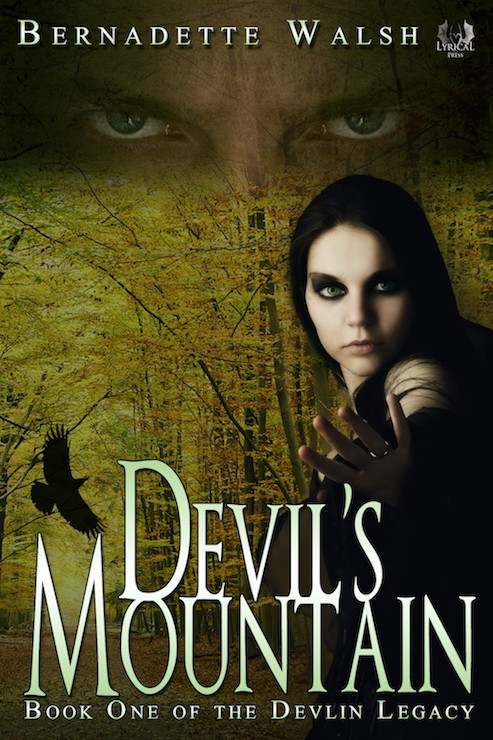 You will hate Him for all that he's taken, but you will love Him. God help you, you will
love Him.

Mary Devlin accepted her fate years ago, to serve
Slanaitheoir
, the mountain spirit who saved her ancestors from the Irish Famine. The hauntingly beautiful woman submitted to His every caress, His every humiliation, but He’s gone too far by threatening her family.

Mary’s daughter-in-law is now an unwitting pawn in the fickle spirit’s game. Mary must challenge her fate and that of all future Devlin women, but
Slanaitheoir
is the most powerful being in the land. And when part of her still yearns for His touch and love, how can she fight him and win?

Bobby looked at me, face flushed, the flames of the fire reflected in his green eyes. The wineglass fell from his hand, shattering on the stone floor. He didn’t even look down but instead pulled me, roughly, to him and kissed me. Not his usual soft, gentle kiss. This was probing, demanding. My lips burned and I responded, though my limbs felt heavy. Bobby made a sound that could only be described as a growl.

Although it took all my strength, I pulled away from him. “Bobby?”

His expression was now wild, pupils dilated, his eyes those of a stranger, of an animal almost. I was mesmerized. I felt those green pools pull me in. I sat motionless for a moment, staring into those strange eyes. I didn’t see my husband of two years there, but anger. Pain. I saw something not quite human.

Despite the almost drugged lethargy of my limbs, I managed to stand up. Bobby grabbed my arm, dagger-like fingers digging into my flesh. Some voice deep inside my head shouted,
Get
out, Caroline. Get out now!

Edited by Mary A. Murray

Published in the United States of America by Lyrical Press, Incorporated Dedication

To the witches of Euclid.

When the doctors told me I’d never have children, I thought I would die. I thought it was the worst thing that could happen to me.

But, as I sat on the steps of Old St. Patrick’s Cathedral that September afternoon willing my newly straightened hair not to frizz, my only concern was the priest was late, still in with the couple whose wedding was to follow ours. Bobby, effortlessly handsome with his new haircut, squeezed my hand.

I looked at the still unfamiliar Cartier watch Bobby had given me that morning as a wedding gift. “I told the restaurant we’d be there by six.”

“We’ve plenty of time,” he said in the soft Dublin brogue that had captivated me seven months earlier.

Bobby shut me up me by kissing me on the lips. He smiled. “We’ve plenty of time.”

A group of NYU students sauntered past us, the girls in their skimpy tank tops reveling in summer’s last gasp. Bobby stretched out on the church’s stone steps, legs spread out like a cat soaking up the sun. He twisted the strange ring on his right hand, a family heirloom shaped like twisted branches. Aside from his mindless twirling of the ring, Bobby looked like he hadn’t a care in the world. My mind of course raced with the hundreds of details the wedding entailed. To be honest, organizational skills had never been my strong suit, and I couldn’t for the life of me remember whether I sent the final check to the florist.

There was no word from the priest as we wilted in the sun, although I was the only one who minded. My mother, wearing her highest heels and brightest lipstick, chatted with Bobby’s father and overdressed stepmother. Bobby’s sister, Orla, her hair dyed a particularly aggressive blond, wiped her two-year-old son’s face as she and her husband laughed with two of my brothers. I think the Irish relatives, both Bobby’s family and my mother’s, were happy to have an excuse to make a trip to New York and they seemed to enjoy the West Village street scene. Even my father’s family seemed less miserable than usual.

But not my father. He stood apart from everyone and leaned against the church’s ornate doors. After more than thirty-five years of marriage, any evidence of my mother’s Catholicism and her Irishness still made my Methodist, dyed in the wool WASP father cringe. Being the child of what my mother referred to as a “mixed” marriage, my religious observance over the years was admittedly spotty, but there was no way my mother’s only daughter was going to get away without a church wedding. The minute we announced our engagement my mother flew into overdrive and planned the entire thing in two months. When my father grumbled about footing the bill for an extravagant Manhattan wedding, in a Catholic church no less, she told him in her still strong County Kerry accent, “Hush, now, there’s no pockets in a shroud.”

The priest came out. “Come in, please. I’m sorry I was delayed.”

Bobby scanned the street. A fire engine roared past.

“Do you want us to wait for her?” I said over the piercing siren.

His mouth tightened. The siren faded into the distance. “No, no. Let’s go in.”

I smoothed one of his errant curls. “Maybe her flight was delayed?”

Bobby’s sister Orla came up behind him and took his arm. “Come on now, brother. I told you she wouldn’t show. Don’t let it ruin your day.”

Bobby said nothing as we walked into the church.

Thirty minutes later, after the priest told us where to stand and what to do, our group spilled out of the church and walked the two blocks to the Italian restaurant I’d booked for the rehearsal dinner. I was laughing at Orla’s son, Brendan, when a woman walked toward us.

She was tall, slim, with black wavy hair that hung down her back. Her skin was clear with a hint of rose at the cheeks. Her eyes, even from a distance, were an unearthly green. They almost glowed in the late evening sun.

My mother stopped so suddenly I bumped into her. “
Draiodair Mna
,” she whispered.

She pointed at the woman and then said louder, “
Draiodair Mna
.”

My normally bossy, confident mother looked at me with the eyes of a terrified child.

“The witch. His witch. The Mountain’s whore.”

I turned to Bobby. “I don’t know what’s wrong with her. Who is that woman?”

Without looking at me, he said, “That’s my mother.”

We stood there for a moment. It was Brendan who broke the silence by running to the dark-haired woman. “Nana!”

“My little man.” She scooped him up into her arms.

Orla quickly took her son from her mother and said in a clipped tone, “So you made it then, Mam.”

She kissed Bobby. “Yes, I’m sorry I’m late.” She turned to me. “You must be Caroline.

I’m pleased to finally meet you.”

Behind me my mother growled, “And I’m her mother.”

Bobby’s mother held out her hand. “Lovely to meet you. I’m Mary Connelly.”

“Who else? Or are you surprised I’m still alive, not crushed by a bus like my poor Jimmy?”

Mary looked like she’d been slapped. “Nellie, no. I’m surprised is all. It’s been a long time.”

We blocked the narrow sidewalk and a giggly crowd of students pushed past us. My father held out his hand to Mary. “I’m Caroline’s father. We’re glad you could join us. Please, the restaurant is right down the street. Let me show you.” And with that, my sour, introverted father gallantly offered Mary his arm and led her through the throng of happy hour revelers to the restaurant.

“Ma, please. I don’t know what’s up with you and Bobby’s mother but you have to calm down.”

She looked up at me. “It’s not too late, Caro. You can still call it off.”

“You can’t marry into that family,” she said, her voice now trembling. “It will be the death of you.”

I dropped her arm. “Cancel the wedding? Are you crazy?”

“Caroline, please. Please listen to me!”

My father’s sister turned to look at us. I whispered in my mother’s ear, “I’ve heard enough. For God’s sake, get a hold of yourself.”

When we reached the restaurant I practically ran to its small bar. As I gulped down my drink, I berated myself for caving into my mother’s demand for a big wedding. I was thirty, and in the past two years I’d attended close to twenty weddings. They were boring and expensive and I had more pouffy bridesmaid dresses than I cared to count. A big wedding was the last thing I wanted.

Bobby, too, was hesitant to put his family through the stress of a wedding. From what little he’d said, his parent’s divorce three years ago was both unexpected and devastating. Mary had found her husband kissing his secretary in a local pub. It fractured the family, with Orla taking the father’s side and Bobby taking the mother’s. Bobby’s father ran off to London with his secretary for a quickie wedding as soon as the ink was dry on their divorce. Mary, who was stunning, really, and looked years younger than her age and certainly younger than the chubby new wife, had returned to her childhood home in Kerry, to Devlin’s Mountain. Bobby was so thrown by it all he’d accepted an offer from an investment bank in New York and emigrated soon thereafter. The four of them--well, I guess five, if you include the new wife--hadn’t been in the same room since Bobby left Ireland. The last thing he needed today was my mother’s antics.

Tina, my best friend since second grade and maid of honor, joined me at the bar. “Why is your mother crying?”

“Oh, Jesus! I seriously thought I’d kill her last week over the seating chart debacle, but this...this is too much.”

“I have no idea. Apparently my mother knows Bobby’s mother from Ireland and she doesn’t seem to like her.”

Tina lit a cigarette and ignored the waiter’s disapproving look. “Did she say why?”

“She said she’s a witch, but you know how my mother likes to exaggerate. Mary probably stole her hair ribbon or tripped her in the schoolyard. She doesn’t want me to marry into that family.”

“Yeah, she was. Now she wants me to cancel it.” I held up my martini. “Hence, the need for alcohol.”

In the middle of my second drink the maitre d’ asked me whether I wanted them to serve the appetizers. “Sure,” I said with a sigh, “might as well get this show on the road.”

Tina rubbed my arm. “It’ll be fine. You know that, right? Every wedding has its hiccups.”

“Tina, the florist sent the wrong color flowers at your wedding. My mother’s accused the groom’s mother of being a witch. Not exactly the same thing.”

Ignoring her carefully constructed seating plan, my mother sat as far away from the Connellys as was possible in the small restaurant. The two-piece band Bobby had hired played during dinner and, upon my instructions, the waiters made sure no one’s glass was empty.