‘Afraid, my dear?’ Ignace smiled properly, and they saw his fangs for the first time.

The sky darkened with the threat of a storm and long, hard drops of rain drummed on the leaves and pitted the sand of the shore. Ruby, Alistair, Finn and Omar crowded into the nearest tent. Ignace told Juliette and Ava to follow them.
He swore to Ava that he would be in the adjoining tent, keeping her safe.

The wind thrashed the tent flap so that it slapped to and fro, a dark triangle beating against the flysheet like a great wing. Juliette reached out to grab it, to zip it up, feeling the rain cold against her arm. Suddenly, strong fingers gripped her wrist.

Juliette screamed, trying to pull her arm free, but the fingers dug in tighter, hurting her, then twisting as though trying to break her arm.

‘Help!’ she managed to whimper through the pain. ‘Something is holding me! Help!’

Before the others could do anything a shape blocked the entrance to the tent. The fabric made the shape indistinct. Blue jeans, white shirt, streaks of red. Juliette was still whimpering,
tugging her arm to try to free it, but struggling made the grip tighter, the twisting more painful.

Ava gasped, scrabbled towards the back of the tent and tried to hide herself under sleeping bags.

‘What are you doing?’ shouted Omar, as she crawled over him. He lunged towards Juliette, grabbing her. The figure outside crouched down, not letting go of her wrist, and ripped the flap aside. His chest was covered with blood, spreading from the tent peg still sticking between the ribs.

‘Little pigs, little pigs, let me come in,’ he grinned, finally letting go of Juliette’s wrist so that she fell backwards into Omar. His eyes scanned the tent, his face tight with fury and pain, until they fell on Ava cowering at the back. He lunged
at her.

‘You’re supposed to be dead!’ she wailed over the sleeping bag clutched in front of her.

‘Leave it! You aren’t having your fight in here. If you two want to tear into each other, you can do it outside – tent-peg boy.’

The newcomer snarled, showing his teeth, but Finn didn’t flinch.

‘No, Nathan,’ Ava shouted from the back of the tent. ‘That won’t work with him. You’ve picked the wrong fight this time.’

Finn and Nathan were still locked together, gripping each other’s arms, head to head.

‘So. You, too?’ Omar said, as calmly as possible. ‘I don’t think fighting is the way forward. This is going to be difficult enough as it is.’

He laid a hand gently on Nathan’s shoulder. ‘Come on. Let’s do the flaps up to keep the rain out and then talk.’

‘Well, that’s not going to happen. There are six
of us and one of you, and you aren’t going to touch her. So can we have a civilised conversation?’

Nathan strained towards Finn, but wasn’t strong enough to break his hold.

‘You tried to kill her. So can’t you just say you’re even?’ Omar struggled to keep his temper.

‘What about this?’ Nathan pointed at the tent peg.

‘You’re not supposed to take out something you’re impaled on,’ said Alistair. ‘It can cause more damage coming out than going in.’

‘Look, we’re all in this together, whether we like
it or not,’ said Juliette at last.

Juliette turned on Finn in fury, but Omar caught her arm.

The flaps of the tent parted. It was Ignace.

‘You’re not doing very well, are you?’

‘No, you’re not. For one thing, if you bite her you won’t kill her – you’ll just be stuck with her for eternity. I don’t want to be policing you lot for the next 400 years any more than you want me to be doing it. But this has happened on my patch,
and I’m going to sort it out – at least for tonight. You – Nathan, is it? – outside. I can remove that tent peg safely.’

Nathan backed out of the tent and sat, sullen, at Ignace’s feet.

‘We need some flour,’ Ignace continued. ‘Do you have any?’

‘Stale bread any good?’ She handed him the food bag out of the tent.

Ignace made Nathan lie on the ground, despite
the rain which pounded against his wet shirt.

‘This will hurt,’ he said as he took hold of the end of the tent peg. ‘Bite on some bread and try not to scream – we don’t want to attract attention if anyone is around. Ava, get out here.’

When Ava was beside him, shivering and soon drenched, Ignace hauled on the tent peg, drawing it slowly from Nathan’s chest.

As he pulled, Nathan’s back arched and he growled in agony through the bread clenched between his teeth. Ava felt sick.

As the tent peg came out, red along its length, a little blood pooled on Nathan’s chest and Ignace immediately dropped bread onto the wound. The bread soaked it up from beneath, turning into a deep red sop. For a moment, Ava remembered the
bread-and-milk sop her grandmother used to make for her when she was ill as a child.

‘Now, you, open your mouth,’ commanded Ignace. And though Ava opened it to object, Ignace stuffed the blood-sop between her lips and then closed her mouth with his hand.

She struggled desperately to spit it out, the metallic, salty tang of the blood making her feel as sick as the idea of it. She tried to open her mouth, tried to cry ‘Can’t’ and ‘No’, but his hand covered her nose and mouth and she couldn’t breathe unless she swallowed it.

Nathan rolled onto his side, clutching his chest.

Finn launched himself from the tent at Ignace’s legs, but the man took no notice, brushing him off as though he were a fly.

‘You’re a total freak! What was all that about?’

‘Immunity. I thought you knew all about vampires? To cure someone bitten by a vampire, they have to eat bread made from flour and the vampire’s
own blood. You didn’t have flour. This will do. The bread is just a way of getting the blood in.’

Ava, free to breathe again, was gasping and retching.

‘Don’t sick it up – we’ll just have to do it again,’ Ignace said sternly. Ava was white, holding her throat, with either rain or tears streaming down her face. Or perhaps both.

‘It’s like a vaccination,’ Ignace said, calm as ever. ‘Protection against the virus. She’ll be immune to vampire bites within a matter of hours. Then you won’t need to control your teenage-boy urges. Which is just as well, as you don’t seem to be very good at that.’

‘Nor you your old-man urges. You’re old enough to be Juliette’s father – in fact, her
great-great
-great-great-great-grandfather if we’re to believe you. What’s going on there?’

Omar had appeared at the tent opening. But he stopped at the sight of the blood around Ava’s mouth. ‘And what’s going on here?’

‘I just explained – vaccination. Vampirism is caused by a virus.’

‘But you made her eat his blood? That’s gross!’

‘Yes. If any of you – or a mosquito – bites her, she will be protected against vampirism. But you won’t feel the desire to bite her. Mosquitoes will, of course, but they can’t harm her now.’

‘How long does it last?’ asked Ruby.

‘Forever, as far as I know. That is, as long as she lives. Because she will die in seventy or eighty years, of course. And you won’t. That will take some getting used to.’

It would indeed. They were all silent, even Finn, for a long time.

‘Die now or live forever? Too late – the choice has been made for you. You live forever – virtually. Nathan, you’re lucky she got it wrong – you nearly got the other option. Now – we need to talk. There’s a lot to learn.’

Anne Rooney does not eat meat, in case the taste of blood becomes too appealing.

When not writing books she haunts the cemeteries and catacombs of Paris and Venice and raises non-vampiric daughters and chickens in Cambridge. She studied at a haunted college and her first car was a haunted van; the undead hold no fears for her.

A CIP catalogue record of this book is available from the British Library.

All rights reserved. This ebook is copyright material and must not be copied, reproduced, transferred, distributed, leased, licensed or publicly performed or used in any way except as specifically permitted in writing by the publishers, as allowed under the terms and conditions under which it was purchased or as strictly permitted by applicable copyright law. Any unauthorized distribution or use of this text may be a direct infringement of the author’s and publisher’s rights, and those responsible may be liable in law accordingly.

The right of Anne Rooney to be identified as the author of this Work has been asserted by her in accordance with sections 77 and 78 of the Copyright, Design and Patents Act 1988. 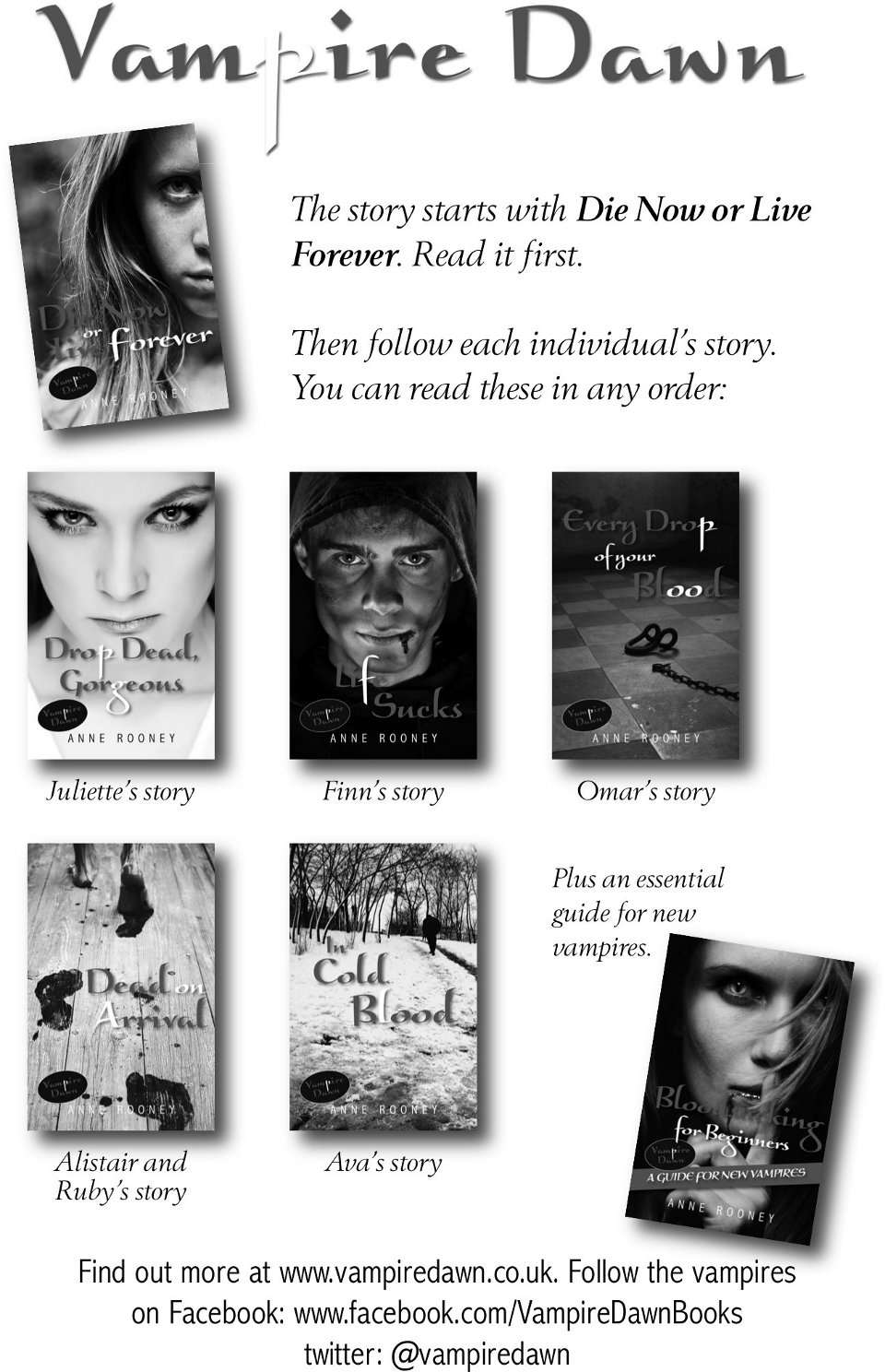