Read Dinesh D'Souza - America: Imagine a World without Her Online

Dinesh D'Souza - America: Imagine a World without Her 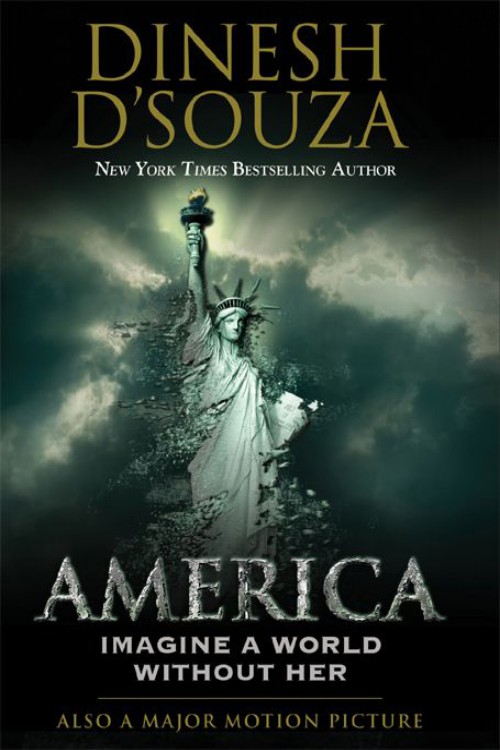 Is America a source of pride, as Americans have long held, or shame, as Progressives allege? Beneath an innocent exterior, are our lives complicit in a national project of theft, expropriation, oppression, and murder, or is America still the hope of the world?
New York Times
bestselling author Dinesh D'Souza says these questions are no mere academic exercise. It is the Progressive view that is taught in our schools, that is preached by Hollywood, and that shapes the policies of the Obama administration. If America is a force for inequality and injustice in the world, its power deserves to be diminished; if traditional America is based on oppression and theft, then traditional America must be reformed—and the federal government can do the reforming.
In America: Imagine a World without Her, D'Souza offers a passionate and sharply reasoned defense of America, knocking down every important accusation made by Progressives against our country.
Provocative in its analysis, stunning in its conclusions, Dinesh D'Souza's America will be the most talked about book of the year.

whose life embodies the spirit of America

CHAPTER 1: SUICIDE OF A NATION

CHAPTER 2: A TALE OF TWO FRENCHMEN

CHAPTER 7: THE MYTH OF AZTLAN

CHAPTER 8: THEIR FOURTH OF JULY

CHAPTER 10: THE VIRTUE OF PROSPERITY

CHAPTER 14: THE BIGGEST THIEF OF ALL

CHAPTER 16: DECLINE IS A CHOICE

SUICIDE OF A NATION

With him the love of country means Blowing it all to smithereens And having it all made over new.
1

W
riting in the mid-twentieth century, the French existentialist writer Albert Camus posed for human beings a central question: to exist or not to exist. In Camus’s words, “There is but one truly serious philosophical problem, and that is suicide.” In a sense, this was Hamlet’s question: “To be or not to be.” For Camus, human beings had lived for millennia in a meaningful universe, a universe created by God, and one that gave significance and purpose to human life. But now, Camus wrote, we have discovered through science and reason that the universe is pointless, merely a constellation of flashing and spinning orbs and objects. God is absent from the world, which is another way of saying he does not exist for us. Consequently humans have to find ultimate meaning elsewhere, and there is nowhere else to look. So life becomes, in Shakespeare’s words, “a tale told by an idiot, full of
sound and fury, signifying nothing.” Drawing on ancient myth, Camus likened the human predicament to that of Sisyphus endlessly rolling the rock up the hill, only to see it roll back down.

For Camus, the problem wasn’t merely that the universe lacks meaning; it was that man desires meaning and there is no meaning to be had. Consequently our situation is kind of absurd. “The absurd is born of this confrontation between the human need and the unreasonable silence of the world.” Most people, according to Camus, ignore this tragic reality. They deflect the meaninglessness of their lives by engaging in various trivial pursuits. But for morally serious people, Camus says, this deflection is not an option. He proposes that humans must take the absurdity of their lives seriously, and in doing so, they must consider whether to live in tragic absurdity or voluntarily end their lives. Suicide, for Camus, was an ethical choice.
2

Of course people since ancient times have considered, and even committed, suicide. Typically, however, they did so out of personal despair, because life for them ceased to matter, or because they were in too much pain. Camus was original in that he raised existential despair to a universal human level—we are all in the same predicament—and because he considered suicide as not just something people do, but something we ought to regard as a moral option, perhaps even a moral imperative. Strange though this may seem, it is a view taken up, to an extent, by the most radical of environmentalists who see human beings as a blight on the planet.

As it is with humans, so it may be with nations. Nations, of course, rarely attempt suicide. I cannot think of a single country that has tried to destroy itself. Presumably this is because nations, like humans, have a survival instinct. The survival instinct of nations is the collective survival instinct of the people in those nations. Why, then, would a nation attempt to destroy itself or commit suicide?
Nations sometimes are conquered by other nations, or they collapse from within, but they never seek self-destruction. Yet Abraham Lincoln observed, a century and a half ago, that if America were ever to fall, it would not be by external means or even by internal collapse. Rather, it would be by the actions of Americans themselves. In his Lyceum Address, Lincoln said:

Shall we expect some transatlantic military giant to step the Ocean and crush us at a blow? Never! All the armies of Europe, Asia and Africa combined, with all the treasure of the earth, our own excepted, in their military chest, with a Bonaparte for a commander, could not by force take a drink from the Ohio, or make a track on the Blue Ridge, in a trial of a thousand years. At what point then is the approach of danger to be expected? I answer, if it ever reach us, it must spring up amongst us. It cannot come from abroad. If destruction be our lot, we must ourselves be its author and finisher. As a nation of freemen, we must live through all time, or die by suicide.
3

Surely Lincoln is not suggesting that America—or Americans—might voluntarily seek destruction. Undoubtedly Lincoln believed that such an outcome would be the unforeseen consequence of calamitous misjudgment and folly. Yet I intend to show in this book that the American era is ending in part because a powerful group of Americans wants it to end. The American dream is shrinking because some of our leaders want it to shrink. Decline, in other words, has become a policy objective. And if this decline continues at the current pace, America as we know it will cease to exist. In effect, we will have committed national suicide.

America’s suicide, it turns out, is the result of a plan. The plan is not simply one of destruction but also one of reconstruction—it seeks the rebuilding of a different type of country, what President Obama terms “the work of remaking America.”
4
While Obama acknowledges the existence of the plan, he is not responsible for the plan; it would be more accurate to say that it is responsible for him. The plan preceded Obama, and it will outlast him. Obama is simply part of a fifty-year scheme for the undoing and remaking of America, and when he is gone there are others who are ready to continue the job. What makes the plan especially chilling is that most Americans are simply unaware of what’s going on. Their ignorance, as we shall see, is part of the plan.

It should be emphasized at the outset that the domestic champions of American decline are not traitors or America-haters. They are bringing down America because they genuinely believe that America deserves to be brought down. Their actions are the result of a powerful moral critique of America, one that has never been effectively answered. Nor is it easy to answer. Most people, confronted with the critique, go mute. Some respond with bluster; others want to change the topic. The ineffectiveness of these rebuttals makes independent observers believe this critique cannot be answered.

Consequently, the critique is widely taught in our schools and universities, and accepted as valid by the ruling powers in Washington, D.C. The critique leads to the conclusion that America must go down so that others can come up. It is now the accepted basis for America’s foreign and domestic policy. The plan for national suicide is in effect. And if it continues to be implemented, it is merely a matter of time—years rather than decades—for the American era to be finished. American lives will be diminished, and the “American dream” will be an object of past recollection and contemporary
sneering. In the minds of those who brought this about, this will be a very good thing. For them, as for Camus, suicide could be regarded as the moral course of action.

Thumb through the writings of the pundits and scholars, and talk of American decline is everywhere. “Is America Over?” reads the headline of the December 2011 issue of
Foreign Affairs
. Writing in
Political Science Quarterly
, Giacomo Chiozza warns that America, once-great, is now “facing the prospect of its final decay.” Stephen Cohen and Bradford DeLong contemplate America’s grim fate in a recent book
The End of Influence
. “The American standard of living will decline,” they predict, and “the United States will lose power and influence.” America can no longer dominate the world because “the other countries … will have all the money.” Once an America booster, Fareed Zakaria now chants a different tune, suggested by the title of his book
The Post-American World
. Across the spectrum, commentators discuss how to prevent decline, or how to cope with decline. Virtually no one is saying that decline is a myth or that America’s prospects are rising.
5

There seem to be three obvious indicators of decline. First, the American economy is stagnant and shrinking relative to the growing economies of China, Russia, India, and Brazil. In a recent article, “The End of the American Era,” Stephen Walt writes that “China is likely to overtake America in total economic output no later than 2025.” The Organization for Economic Cooperation and Development (OECD), based in Paris, predicts that as early as 2016—when Obama leaves office—China, not the United States, will be the world’s largest economy. When this seemingly inevitable event occurs, it will be the first time in many centuries that a non-Western, non-democratic, and non-English-speaking nation has headed the world economy. Since the American era coincides with American economic dominance, it seems fair to say that when the dominance
ceases, the American era will officially have come to an end. And history shows that once nations lose their position at the top of the world, they never get it back.
6