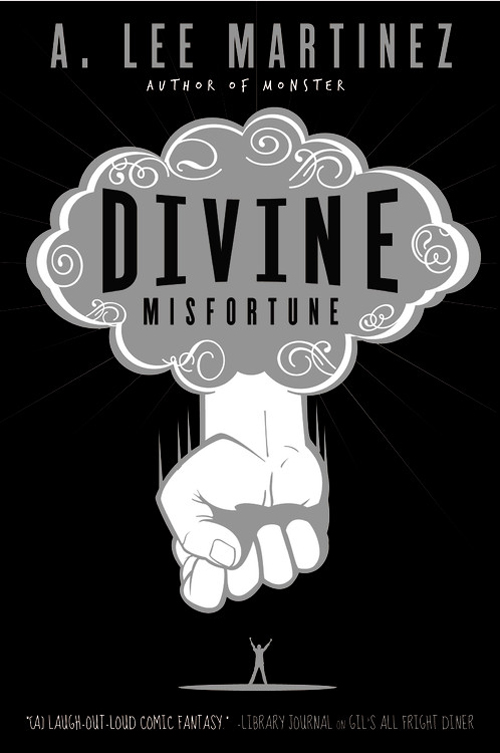 By A. Lee Martinez

In the Company of Ogres

To Mom and the DFWWW, for all the usual reasons.

To Sally, just because I know she’ll be really, really excited to be mentioned in a dedication, and anyone who can put up
with me for this long deserves some kind of acknowledgment.

To
World of Warcraft.
For the Horde!

To me, because it’s been a while since I’ve dedicated a book to myself, and damn it, I’ve earned it with this one.

And to Squirrel Girl, greatest superhero ever. And, yes, she did defeat Thanos single-handedly. It’s in continuity. Deal with
it.

“Hello. My name is Anubis. I like long walks on the beach, carrying departed souls into the underworld, and the cinema of
Mr. Woody Allen.”

“What? What’s wrong with this one?” After an hour of watching Internet videos, Phil’s patience was wearing thin. It seemed
no god would be good enough for his wife.

She frowned. “Eww. That’s even worse.”

“How is that worse?”

She shrugged. “I don’t know. It just is. I mean, dogs are nice, at least. But jackals… who has anything nice to say about
them?”

“He isn’t a jackal, honey,” he said, with an edge on the term of endearment. “He just has a jackal head.” He loved his wife
dearly, but she was making this difficult. If it had been up to him, he’d just pick one. Any old low-maintenance god would’ve
worked.

“But what about that
cinema of Mr. Woody Allen
line?”

“But it’s important. The words someone chooses say a lot about them. And people who say
cinema
are pretentious.”

He rolled his eyes. “He’s a god. He’s allowed to be pretentious.”

Phil scrolled through Anubis’s profile. “He’s a pretty good find. I think we should sign up with him while we can.”

Teri looked at him coldly. She didn’t use the look a lot, but it meant there was no changing her mind. He didn’t feel like
fighting about it anyway. There were plenty of other gods. Somewhere in the hundreds of listed profiles, there had to be one
she couldn’t find anything wrong with.

She was right. It wasn’t a decision to be taken lightly. The string of events that had led him to peruse the digital pages
of
Pantheon.com
, the Internet’s second-largest deity matching service, hadn’t made him forget that.

First had been the promotion. Another one passing him over. The fourth opening in as many months. Instead, that kiss-ass Bob
had taken Phil’s step up the corporate ladder. Phil had been practicing his brownnosing and was damn good at it. Better than
Bob. So good in fact that Phil had actually swallowed his outrage and walked up to Bob’s new corner office to congratulate
his new boss.

“Oh, please. Don’t worry about it.” He made a casual sweeping gesture at the altar. “Five minutes won’t kill the old boy.”

Phil leaned in against the doorway, perched on the edge of Bob’s corner office with its plush carpeting and obnoxiously large
desk clearly made from some rare and expensive wood that Phil couldn’t recognize but still resented. He tried not to notice
the lovely view of the park just below.

“Something I can do for you?” asked Bob.

“Just wanted to say congratulations. You deserve it.”

“Thanks. Honestly, I’m surprised you didn’t get it. I thought for sure that fatted calf I offered ol’ Baal here wasn’t going
to be enough. What did you offer?”

“Ah, that explains it. You know, it never hurts to stain the sacrificial altar now and then. Keeps the boys upstairs happy.”

“I don’t have one.” Phil crossed his arms tight enough to cut off the circulation. “An old boy, I mean.”

“Really?” A curious expression crossed Bob’s face, as if Phil had just admitted to being a cross-dressing jewel thief clown
in his spare time. “You really should get one. They’re an absolute necessity. I don’t see how anyone gets along without some
upstairs help.”

That alone wasn’t enough to push Phil into the decision.

On the car ride home, distracted by his worries, he’d been in a minor fender bender. The damage wasn’t serious, just a dented
bumper and an ugly scrape to his paint job. But the other driver’s car didn’t have a scratch.

The other driver pulled out a special knife and ran it across his palm, drawing some blood to offer to his god as he incanted,
“Blessed be Marduk, who keeps my insurance premiums down.”

Phil arrived home. As he pulled into the driveway, the first thing he noticed (the first thing he
always
noticed) was his lawn. It taunted him, a symbol of his promising life, once green and flourishing, now greenish and wilted.
He watered and fertilized it. Had even brought in a specialist. But it was dying, and there was no way to stop it. He took
comfort in the fact that nobody else in the neighborhood could get their grass to grow either. There was something in the
soil, a lingering curse laid by Coyote on this spot of land for the injustices the Native Americans had suffered at the hands
of the Europeans. The natives got smallpox, and the suburbs got yellowed grass. A light punishment for stealing a continent,
Phil had to admit, but still annoying.

Except his next-door neighbor Ellen had a lush green lawn today.

Phil didn’t have to guess what had happened. The four-foot-high faux granite goddess statue told him everything he needed
to know.

Ellen’s car pulled into her own driveway, and she noticed Phil eyeing the lawn.

He stifled a scream. “I thought you already had a god. That weird one. The one with the horns and the nine arms.”

“Oh, sure. That’s still working out for me, but he’s a jealous old goat,” she said. “But he doesn’t do lawns. So I just hired
an outside service. They stick up the statue, offer the tribute, and my god doesn’t get jealous and smite me dead. It’s a
win-win.” Ellen knelt down and ran her hand across her lawn in an almost obscene manner. “That Demeter sure knows how to handle
crabgrass, doesn’t she?”

And that was that. The next day Phil went online and signed up on
Pantheon.com
.

Teri was against the idea at first.

“You knew I didn’t want any gods before we were married,” she said. “We had a long talk about this.”

“My grandfather was killed by a desert god, y’know,” she said. “Just for cutting his hair.”

“In the end, they always get you, Phil. They always screw you over. Read your history.”

He took her in his arms. She offered some resistance, then hugged him back.

“Honey,” she said, “I know you’re frustrated with how things have been going lately, but I don’t think you’re thinking this
through.”

She pulled away from him. “We’re not doing so bad, are we?”

Phil looked at his house. It wasn’t big, but it was big enough. They had the finest furniture IKEA could supply, a television
larger than would have been sane ten years ago, and enough bric-a-brac and art hanging from the walls to keep Teri happy but
not appear too cluttered. Although he could’ve done without the sailboat motif. Something he’d always found odd, considering
he’d never heard Teri even talk about sailing once since he’d met her.

They were paying the bills, and they weren’t that far in debt. Not more than anyone else. And he had a wife who loved him.
He knew it should’ve been enough. More than enough for any man.

It wasn’t. Not when any idiot willing to throw a lamb onto a pyre was able to get ahead while they struggled to make it. Everything
would be great if they could just get a little divine intervention.

She turned her back to him. “I just think it’s a bad idea, Phil. That’s all.”

A week passed. Phil went online and watched clips of various gods. He even considered signing up with one in secret. Teri
didn’t have to know. He could always keep the altar or shrine or whatever somewhere else. Maybe at a friend’s house. Or in
the toolshed. He told himself that it would be a good thing, that it would improve their life, and that if Teri wasn’t signed
up, too, then it would work out great for her since she’d get all the benefits without any of the obligations.

He couldn’t do it. Not behind her back. If they were going to do it, they needed to do it together or not at all. Teri would
never budge on this issue, and maybe she was right. He already had a lot of responsibilities. He didn’t need any more. Especially
responsibilities that involved temperamental deities who had a tendency to smite first and never even bother asking questions
later. The longer he thought about it, the more he knew it had been a bad idea and that Teri had done him a big favor by talking
him out of it. That was why he loved her. She had the common sense he didn’t.

The next day, she called him at work.

It took Phil a few moments to remember the debate, so far back had he pushed it in his mind. “But I thought you said you didn’t—”

“I saw a cat come back from the dead today.”

“Just listen. I ran over the cat.”

“Let me finish,” she said. “I got out and checked on it, but it was dead. Then this little girl who was watching came over
and touched it, and it was alive again. Just like that.”

He scowled. “Children shouldn’t be allowed to play with divine favor.”

“The point is that she was able to save a life. And I thought, if a little girl can save a cat, what could I do with that
kind of power? And I thought maybe you were right. It’s not the gods. It’s what we choose to do with their gifts.”

“Yes,” she said. “Maybe. I don’t know. It’s not something to take lightly, and maybe I’ll change my mind later. But it can’t
hurt to look, I suppose.”

“It was your idea in the first place,” she said.

And now, six hours later, here they were back on Pantheon, trying to find the god for them.

Johnny Mackintosh and the Spirit of London by Keith Mansfield
The Sword of Ages: The Mage Breaker Book 1 by Issett, A.L.
The Commitment (The Unrestrained #2) by S. E. Lund
50 Ways to Ruin a Rake by Jade Lee
Rising by Kelly, Holly
Balls Fore (Ball Games #4) by Andie M. Long
Foul Tide's Turning by Stephen Hunt
Cruel Capers on the Caribbean: A Kate on Vacation Mystery (The Kate on Vacation mysteries) by Kassandra Lamb
Body Politic by Paul Johnston
Creación by Gore Vidal