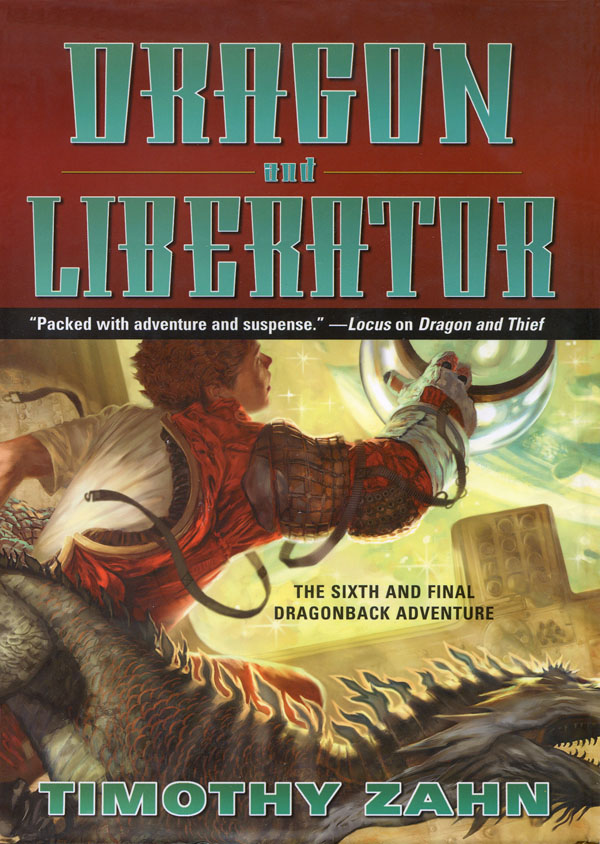 The words echoed through Draycos's mind as he lay in his
two-dimensional form against Jack Morgan's back, arms, and legs.
One
month
.

One month left until the refugee fleet carrying the remainder of
his K'da people and their Shontine symbionts arrived here in the Orion
Arm of the Milky Way galaxy. One month until their long, wearying
journey would be over.

One month until they flew into the ambush that Arthur Neverlin and
the Valahgua were preparing for them.

Or perhaps even less than that. After two years in hyperspace,
they could easily be a week or two early for their rendezvous.

Draycos raised his head a little from Jack's shoulder, his eyebrow
ridges and spiny crest pressing up against the boy's shirt. Through the
windshield of the car Jack had borrowed from a used-vehicle lot, he
could see the Brummgan town of Ponocce City laid out in front of them.
Its ugly color scheme, thankfully, was shrouded by the darkness of
night and the city's mediocre streetlight system. Three miles straight
ahead, its lights reflected against the low clouds, was the spaceport
where some of the enemy forces were even now being gathered together.

Draycos swiveled his head around, lifting his eyes over the back
of Jack's shirt. Directly behind the car, rising over the low houses
around it like a breaking ocean wave, was the tall ceramic wall that
surrounded the Chookoock family estate.

There were some very unpleasant memories tied up with that wall
and the evil people who hid behind it. Draycos could imagine how Jack
must be feeling right now as the memories of his brief time as a
Chookoock slave were forced back upon him.

Draycos
? Jack's thought flowed into the K'da's mind along
the strange telepathic link the two of them had somehow developed.
You
okay
?

Yes
, Draycos replied.
Why do you ask
?

You're twitching your tail against the back of my knee
,
Jack told him.
I thought maybe you were nervous
.

Draycos hadn't even realized he'd been doing that.
My apologies
,
he said, bringing his tail to a halt.

No problem
, Jack assured him.
It tickled, that's all
.

In the distance behind them, Draycos caught a flicker of reflected
streetlight from the gate set into the white wall. "The gate's opening
again," he said aloud.

"Got it," Jack said, picking up the portable sensor he'd brought
from the
Essenay
and pressing it against the side window.
"Geez, how many soldiers have they got in there, anyway?"

"Well, we've had around three hundred come through here, if that
helps any," Alison Kayla's voice came from the comm clip attached to
Jack's left shirt collar.

"Yes, thank you, I
can
do basic math," Jack growled. "You
want to keep it down?"

"Relax—they can't possibly hear me," Alison said. Her tone managed
somehow to be reassuring and sarcastic at the same time. "We're all the
way up at the top of the hangar on one of the loading-crane supports."

They'll be all right
, Draycos assured him.
I know
,
Jack said.

But the boy's words couldn't hide his tension. Especially since it
was the same tension Draycos himself was feeling.

Especially not Taneem. The young female K'da was intelligent and
likable, and she'd certainly shown herself willing to put herself at
risk for Draycos and his people.

But she'd spent most of her life as little more than an animal.
Her transformation to full, sentient being was less than two months
old. She still needed more learning and experience before she would be
ready for even a normal K'da life.

And the circumstances she and Alison were in right now were
anything but normal.

Restlessly, Draycos lashed his tail. He should have put all four
feet down right from the start and insisted that he and Jack take this
part of the plan.

The problem was that Alison was just as stubborn as Draycos was.
And, unfortunately, she'd also had logic on her side. She and Taneem
had already successfully opened one of the K'da/Shontine safes, and
that experience was worth more than any coaching that Alison could give
Jack. Even Jack had admitted that. And to be fair, she
had
proved she was capable of handling herself.

But all the logic in the universe didn't help. Draycos's emotional
core was still tied up in knots of frustration and concern.

"Ready, Jack lad," the voice of the
Essenay
's computerized
personality came from the comm clip.

The first van reached their position. Jack held the sensor steady
against the window as it rolled past, followed closely by its two
companions. "Okay," he reported as the vehicles' taillights continued
down the dimly lit street. "Uncle Virge?"

"First one seems to be all personnel," Uncle Virge said slowly as
the computer sifted through the data Jack's sensor had sent it. "Looks
like our standard fifteen armed Brummgas."

Draycos grimaced. Alison's theory was that the Patri Chookoock's
role in this conspiracy was to supply Brummgan soldiers to crew the
ships that would be attacking the K'da and Shontine refugees.
Apparently, she'd been correct.

The Patri Chookoock was donating the soldiers and crews. Arthur
Neverlin, once chairman of the board of the megacorporation Braxton
Universis, was supplying the planning. Later, when the K'da and
Shontine were all dead, he would probably also provide the marketing
system they would use to sell the technology from the looted refugee
ships. The Valahgua, deadly enemies from the K'da and Shontine's own
far distant part of the galaxy, were providing their horrible and
unstoppable Death weapon.

That left only the attack ships themselves. Presumably, Colonel
Maximus Frost of the Malison Ring mercenaries would be supplying those.

And all that the unsuspecting refugees had standing between them
and genocide were Jack, Draycos, Alison, and Taneem. Two young humans,
and two K'da.

And a single month of time.

Draycos felt Jack's muscles tighten beneath him. "How big?" the
boy asked.

"A little shorter than you and quite a bit wider," Uncle Virge
said. "And I'm getting an unknown on the particular alloy."

Draycos lifted his head again to look at the vans' retreating
taillights. Each of his advance team's four ships had had one of those
safes aboard, a safe that had contained the location of their planned
rendezvous with the incoming refugee fleet.

But Neverlin's ambush of the team had killed all the K'da and
Shontine except Draycos, leaving all four safes in his hands. Two had
been wrecked when Neverlin's men attempted to open them. Alison, under
threat to her life, had opened the third for them.

Three safes down. One still left.

And the final safe had at last been brought out from behind the
protection of the white wall and was heading toward the hangar where
Alison and Taneem were waiting.

"Not a problem," Alison said. "I've got enough sopor mist
canisters planted to blanket the whole hangar. I just need to make sure
all three vans are inside before I trigger them."

"Just make sure they don't have gas masks on before you do it,"
Jack warned.

"You want to walk me through it, just to make sure I do it right?"
Alison asked tardy. "Relax, will you? I know what I'm doing."

"I hope so," Jack muttered as he set the sensor on the seat beside
him and started the car.

They'll be all right
, Draycos reassured him as the boy
pulled out into the Ponocce City traffic.
We'll be only a few
minutes behind this last group. If there's trouble, we'll be in
position to help
.

Sure
, Jack said.
Help me watch for cops, will you? I'm
going to see if I can get a little more speed out of this crate
.

There was a distant, muted thunk. Across the hangar from where
Taneem and Alison crouched on the wide crane supports, the large doors
on the north wall began to roll up. "This should be them," Alison
murmured.

Taneem didn't answer. Her heart was bearing rapidly, a cold sense
of dread twisting like morning chill through her. Very soon now, the
waiting would be over.

And she was terrified.

She'd been in dangerous situations before, certainly. Several of
them, in fact. But never had she found herself facing the sheer numbers
of Brummgas wandering restlessly around the hangar floor below them.
There were twenty-three of the aliens—Taneem had counted them five
times—all of them carrying guns and wearing thick body armor. If Uncle
Virge was right, the vans outside those opening doors carried another
thirty-five of the aliens.

"You all right?" Alison's soft voice asked into her thoughts.

With an effort, Taneem lifted her silver eyes from all those guns
and focused on Alison's calm face. An odd thought ran through Taneem's
mind: a girl of Alison's mere fourteen years had no business being so
calm in the middle of this much danger. "Yes, I'm fine," she said,
trying to keep her voice from shaking.

"The waiting's always the hardest part," Alison told her. "But try
to relax. If this goes down like it's supposed to, neither of us will
have to do any fighting."

And if it doesn't go down like it's supposed to
? Taneem
wondered. But there was no point in bringing that up.

The doors below finished opening, and three vans pulled inside.
They rolled past the milling Brummgas and pulled up behind the two
shuttles waiting by the much larger doors at the south end of the
hangar. There had been ten such shuttles when Taneem and Alison had
first arrived, which had left the hangar in pairs as each group of new
passengers arrived and was loaded aboard.

At first Taneem had hoped the shuttles might provide the answer to
their problem. Alison had brought along the transmitting device that
Colonel Frost had used to track the
Essenay
to Rho Scorvi, and
Taneem had hoped she and Alison could plant it aboard one of the
shuttles and find the refugee rendezvous point that way.

But Alison had explained that the shuttles would simply be taking
the Brummgas to another ship or group of ships waiting out in deep
space. Those ships would then continue on, while the shuttles returned
to Brum-a-dum.