Read Echoes of the Heart Online 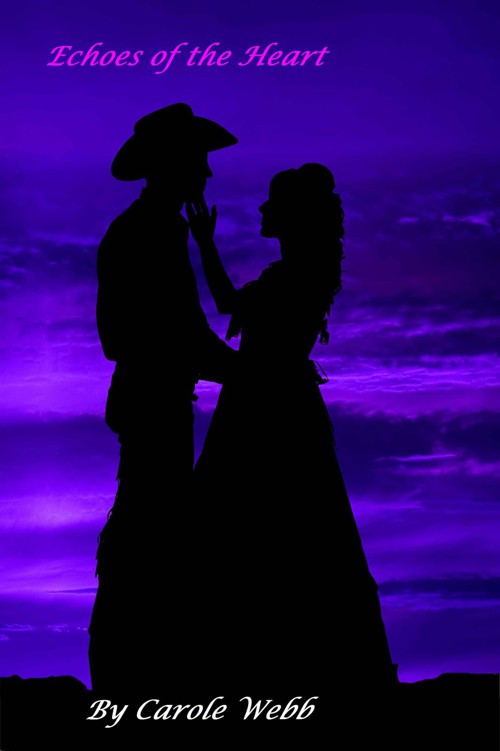 “If ever thou shalt love,

It gives a very echo to the seat

The upcoming
wedding made Raeden feel unhinged, basking in the flood of warm, yellow
sunlight pouring through tree branches did not help, and once again she became
overwhelmed with anxiety.

She sat up
flipping her deep chestnut hair across her shoulder.

This feeling had become a constant nightmare
and wished she would wake up and find it just a dream.

Always enjoying
her times alone with her companion D’Artagnan, lovingly nicknamed Arte, the blood
bay stallion, she rode into the meadows, the scent of meadow flowers enlivened
her senses and the pristine brook, which meandered through her favorite resting
place, a romantic melody in her ears and fear and dread in her thoughts.

The lazy afternoon and beautiful wildflowers
in their yellow and red jackets could not dull her torment.

Her artistic gifts included sewing and
tailoring and the riding apparel she had made of soft suede did not hide the
rounded curves beneath.

Her costume would certainly make her mother
shake her head in frustration.

Disappointment becoming a constant between them, always in conflict over
the things that made Raeden happy and the steady rebellion she could not
suppress.

She could not remember when it
started, the incarcerations to her room only reprieved by her father when he
returned home from the bank he owned in town.

Raeden didn’t
understand this thinking, after all the late1800s had become quite
progressive.

Times had changed
significantly and archaic notions no longer held importance and her manner of
dress any one’s business but her own.

Women’s Suffrage movements made people more aware of the injustices and
Harriet Beecher Stowe’s
Uncle Tom’s
Cabin,
one of her favorites, became a best selling novel.

Women would be voting before long then, there
would be great advancement, but for now, she had to cope.

From the age of
twelve, she loved fashions, colorful fabrics and the art of creating beautiful
clothing.

She polished her talents while
attending finishing school in the east by making one of-a-kind gowns for many
girls at school.

They paid her
handsomely and she admitted pride in her accomplishments, though she could
never mention this to her mother.

She hoped to do
fashion design, travel to Paris one
day, and survey her gowns twirling in ballrooms, envious women asking who
designed them.

Her mother, Sophia
Madison Newell, a sophisticated woman of means from New
York, married her father, Samuel Newell, from a
wealthy family in the east.

Their
marriage bore four children, Thomas, Craig, Raeden and Cynthia who they raised
in St. Louis.

The Newell Bank, owned by her father brought
him success while making a fortune when the railroads spread further west.

Most in town perceived their house located on

Main Street
as an
attraction.

Considered one of
the most eligible young women in St. Louis,
her family expected her to marry since she had turned twenty-one, past the age
some thought a woman should have a family.

Raeden’s dark chestnut hair streaked with crimson contrasted with her
deep green eyes and her silky skin often showed a slight color from the sun,
much to her mother’s dismay.

Her medium
height went perfectly with her full bosom and diminutive waist.

Her
parents—actually her mother—had selected their husband of choice, Christopher
Wentworth, a tall handsome blond-haired man with strong stature.

His family also came from wealth and he doted
on Raeden but she knew something was missing when with him.

Dreams of love
eluded her.

There must be more to
life.

Of course, Christopher would
insist she be a dutiful housewife and discontinue the
nonsense
of creating gowns inspiring envy in all her friends.

Her fear mounted with each passing day.

In forty-eight hours, she would be a married
woman.

As golden rays of
sun dropped in the azure sky, she mounted Arte, eyes taking in the beauty of
the panorama.

The fragrance of dogwood
assailed the air.

An eagle swooped down
searching for prey, its massive wingspan spreading a moving shadow along the
rolling pasture.

Even her horse appeared
hesitant to leave the lush meadow grasses but gentle coaxing eased him into an
even strong stride toward home.

His gait
smooth and fast, he covered the distance without breaking a sweat.

A distance from
the house stood the stable with six large stalls and a carriage house
alongside.

Most likely taking his
evening meal, the groom did not greet her so she made her way to the tack room
where she unsaddled Arte, brushing him briskly until his coat gleamed then led
him into his stall and fed him his ration of grain and hay.

After changing
clothes in the tack room, she put away her riding garb in the storage box in
the corner of the straw-strewn stall.

Raeden did not see the need to listen to her mother’s chastisement once
again for dressing like a boy.

Quickly
sweeping away minute wrinkles in her crisp green day dress, she made her way to
the house, hoping to go unnoticed.

The house stood
out on the block as one of the largest with expansive porches surrounding the
entire three-story structure.

In the
front yard, masses of well-tended flowers and bulbs made a splendid array of
blues, yellows and reds.

Fresh cuttings
always filled the house with their pleasant fragrance and cheerful hues.

Her footsteps resounded on the white marble floors as she approached the
wide stairway leading to the rooms upstairs.

Her bedroom at the end of a long hallway with thick wool runners of
Oriental design faced the morning sun.

As she entered and looked around, she realized she would miss her little
haven adorned just to her liking when leaving with her new husband.

It sounded so strange and she would be a wife.

The very thought made her stomach churn.

Doilies
atop wooden tables held plants in china pots enjoying the life-giving warmth
and gave the room a touch of natural character.

She had fashioned
a spread of lilac lace with yellow backing and covered her over-sized down
pillows adorning her bed in the left corner of the room in the same soft yellow
fabric.

The colors sang of spring.

A sewing machine stood in the opposite corner
near a maple table.

Trunks over flowing
with fabrics, threads and trims lined the wall apposite her window.

She spent many hours at the sewing table
designing and stitching her creations, alone with her dreams.

A massive
fireplace to her right connected to the kitchen below by copper-lined ductwork
holding pipes with water warmed by the fire.

Relentless in his
quest for the modern conveniences, her father had insisted on this new design
and not waiting for hot water hauled up the long staircase for a bath suited
her just fine.

Once in the
comfort of her familiar surroundings, she returned to her immediate
dilemma.

How could she possibly get
married and live the life expected of her?

Her family could not understand her desire to be a seamstress and
designer, since ample money existed for her to have anything she desired, not
to mention the sizeable inheritance she received from her maternal
grandparents.

It went against her
nature to sit idly by and watch her life drift past in useless, redundant
customs she found boring and of no consequence.

Wringing her hands, she paced the floor in her room trying to make sense
of her thoughts.

A soft rap on the
door by their housekeeper, Mary, announcing dinner in thirty minutes, Raeden
quickly ran water in the copper tub near the fireplace and immersed, wishing
she had more time.

After splashing
her skin with rosewater and glycerin and drying with a plush towel, she pulled
a soft blue dress from her ample French provincial armoire standing on four
scribed feet with four large drawers adorned with polished brass handles.

Petal soft
undergarments sewn from fine silks in an array of colors filled one
drawer.

The smooth fabric against her
skin made Raeden feel feminine and appealing.

A hint of baby blue lace peaked from her camisole lying against the pink
swell of her breasts.

She pulled the
ample chestnut locks on top of her head holding the strands with crystal-topped
pins matching her dress.

Sliding a hand
down the mahogany banister, she descended the broad staircase to where the
family had begun to assemble for supper in the spacious wood paneled dining
room accentuated with lacquer-framed oil paintings of still life’s and family
portraits.

A thick Turkish carpet
muffled footsteps on the polished oak floors beneath.

The aroma of food wafted from the kitchen.

Raeden faced her
Aunt Diane, hoping she would not notice the uneasiness surely appearing on her
face.

After arriving all the way from South
Dakota to attend the ceremony, Raeden didn’t want to
disappoint her.

Raeden knew she had
always been Diane’s favorite since a small child and she looked upon her aunt
as a champion of sorts, mostly taking her side against her mother when she
attempted to send her off to boarding school after a round of battle regarding
the objectionable behavior she could not seem to curb.

This must be another of your gorgeous
creations.

She reached for Raeden and turned her around
to see the entire dress.

“Did you enjoy
your ride?

Perhaps tomorrow we can go
together, unless everyone is too busy with the wedding.”

That would be lovely.

We could
get up early and have a nice ride.”

Diane always wore long pants and rode horses astride which may have been
one reason for her own rebellion.

An
open smile covered her face.

“I would
love to show you my favorite places.

I
can’t tell you how happy I am you and Uncle Mike came for the ceremony.

It must have been difficult to leave the
mercantile.”

Reign Fall by Michelle Rowen
For The Love Of A Goon 2: A Miami Hood Love Tale by Lady J
The Wedding Dress by Marian Wells
Linda Welch - A conspiracy of Demons by A Conspiracy of Demons
True Fires by Susan Carol McCarthy
Kalimpura (Green Universe) by Jay Lake
Dorothy Garlock by High on a Hill
Spacepaw by Gordon R. Dickson
The Wolf's Mate Book 7: Lindy & The Wulfen by Butler, R. E.
Manipulating Mikey (First Wave Book 8) by Mikayla Lane