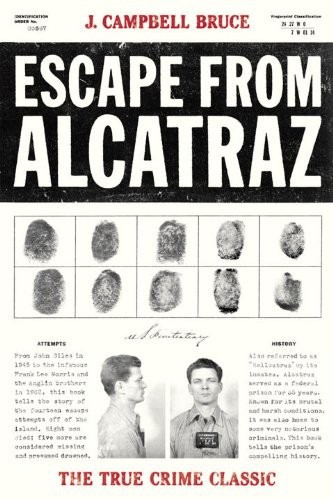 All rights reserved. Published in the United States by Ten Speed Press, an imprint of the Crown Publishing Group, a division of Random House, Inc., New York.
www.crownpublishing.com
www.tenspeed.com

Originally published in the United States by McGraw-Hill, New York, in 1963.

For Bianca,
who did time on
this
rock.

THIS BOOK WAS FIRST PUBLISHED
in 1963. Two weeks before the publication date the last prisoner was escorted off of America’s Devil’s Island and Alcatraz ceased to be a prison. In the ensuing years The Rock has taken on many guises. It was the locale of several Native American occupations and has become a thriving tourist destination administered by the National Park Service. It has been the subject of several movies, most notably the 1979 release
Escape from Alcatraz
starring Clint Eastwood, based on the J. Campbell Bruce book of the same name.

Both the book and the classic movie portray in spellbinding detail the daring escape attempt by Frank Morris and two accomplices. The movie was the first ever to be offered as a home-rental tape and has become a classic of the prison-film genre. It is considered by film historians to be a pivotal role in the remarkable career of Clint Eastwood.

The book is written in a terse but compelling narrative style and is easily discernable as the basis for the movie. However, there is more to the book than just Morris’s dramatic escape. Woven between chapters on Morris’s entrance, existence, and exit from this “inescapable” prison is a thorough chronicle of The Rock’s transition from a Spanish fort into the maximum-security penitentiary that housed such infamous inmates as Robert Stroud, the Birdman of Alcatraz, and mobster exemplar, “Scarface” Al Capone.

This edition features a gallery of photographs including a scene from the movie. It invites the reader to discover the intriguing saga of Alcatraz, whose name is still synonymous with punitive isolation and deprivation where America’s most violent and notorious prisoners resided in tortuous proximity to one of the world’s favorite cities.

J
ANUARY 14, 1960, A THURSDAY
, broke dismal and drizzly over the San Francisco Bay region. The Weather Bureau had forecast a few showers in the morning, clearing in the afternoon. The showers would spill off the southern fringe of a disturbance centered in the Gulf of Alaska, spawning ground of winter storms along the Pacific Coast.

During the night the center had moved a bit southward and an hour or two after daybreak, as unexpectedly as an earthquake, the storm whiplashed the Bay Area. Gusty winds flung sheets of rain along the street, pelted hail at windshields, powdered the high peaks with snow. Commuter traffic crawled off the bridges and the Peninsula freeway, further choking the city’s already clogged arteries.

The
Warden Johnston,
the boat to Alcatraz, grated against the landing at the Fort Mason dock as she rose and fell on the wind-stirred swells. She was a half hour late casting off for the nine o’clock trip to the island. The skipper glanced at the frothing whitecaps on the bay, then back at the gateway to the pier. He was waiting for an extra passenger, coming in from Georgia. The Southern Pacific’s Lark, overnight train from Los Angeles, where it had made connection with the cross-country Sunset, had arrived on time, but the storm was now in full fury. At length, a black limousine rolled through the gate, the traveler came aboard, and the
Warden Johnston
pulled away.

The man from Georgia, of medium height and build, sat quietly in a cabin of the launch, staring at the rain-sloshed window. Drops of rainwater still dripped from his thick brown hair and coursed down his face, off his firm chin and strong-set jaws, but he appeared oblivious to any discomfort. His eyes, hazel eyes, held a bold, level gaze and, as any newcomer to the area, he seemed eager for his first glimpse of Alcatraz. Something about his face caught the attention: not just the good looks, not the manifest intelligence, nor even the solemnity. Something else … nothing, really, and therefore significant: this man, at the age of thirty-three, bore not the faintest hint of a smile line at the corners of his mouth, yet his lips had the fullness associated with an amiable nature.

Squalls buffeted the
Warden Johnston
as she plowed out into the bay, taking a wide loop to starboard to make a direct approach through the treacherous tide rips to the wharf on the southeastern end of the island. Seemingly, down by the bow, she plunged through the waves rather than over them, keeping the deck and the pilot-house windows awash. The grim outline of Alcatraz loomed up ahead, its massive bulk remarkably like an obsolete battleship riding at anchor, its prison and lighthouse on the crest like a superstructure and stack.

Below, the prisoner watched the formidable crag rise out of the spray and rain shroud—a granite keep at world’s end—but only the curiosity of a sightseer marked his expression. His glance caught a sign on a cliff, its huge letters dimly discernible in the deluge: “KEEP OFF! Only Government Boats Permitted Within 200 Yards. Persons Entering Closer Without Authorization Do So At Their Own Risk.”

The black plastic raincoat that had been thrown over his shoulders for the few steps from depot to limousine and, at the dock, for the fewer steps down to the landing float and onto the launch, now lay open. It became evident that his attire on the transcontinental trip—first-class Pullman accommodations—was the salt-and-pepper garb of a federal felon. The pants, a special pair issued at Atlanta for the journey to Alcatraz, were extra large and beltless. Thus, even though hobbled by ankle irons fettered together, should he try a dash for freedom the pants would drop and further impede flight. In addition, his shoes had been replaced at Atlanta by backless canvas slippers.

The
Warden Johnston
edged cautiously alongside the wharf and made fast. The doctor on his daily visit and other passengers debarked. Then the skipper performed a habitual security rite. He locked the wheel, went ashore, attached the key to a line and signaled the guard in a bulletproof gun tower. The guard came out to the tower rail and hauled up the key by pulley; he would keep it there until the next scheduled departure, and he would lower it then only if assured the
Warden Johnston
’s skipper was still in charge and
all
The Rock’s convicts were accounted for.

The storm, worst in years, took a freakish turn as the prisoner, huddled under his black raincoat, now shuffled ashore. The
San Francisco Chronicle
’s weather story said that around 10
A.M.
—just about the time the prisoner was stepping onto The Rock—lightning began to streak the sullen sky and thunder rolled like a cannonade, a phenomenon common to a humid eastern summer but rare at any season in this region.

A bolt struck the Point Bonita lighthouse on the north headland beyond the Golden Gate, disabling its radar and radio—the direct contact for Coast Guard help when a break occurs at Alcatraz. Lightning also hit a power line that blacked out communities along the Marin County shore to the north and nearby Angel Island.

The chink of the chains around his legs made a faintly musical note in the storm as the prisoner slowly climbed into a waiting bus. He glanced out at the dockyard where cargo is sifted and then passed through a metal detector—something like a doorframe with a humped sill, dubbed the Snitch Box by the convicts—before being carted to the crest. Another such detector, kept there for visitors, stood beneath a shelter at the far side. These “eyes,” an Alcatraz innovation along with other advanced security devices, inspired an early inmate to characterize The Rock as “a scientific stir.”

The bus labored up the narrow, tortuous road, its progress watched by the sentry in the higher tower. To return to the dockside the driver would descend by an equally twisting route carved into the southwest façade of The Rock. At the beige-colored prison on the crest a grim reception committee waited—guards in nickel-gray uniforms with maroon ties, rifles at the ready.

The prisoner, still hobbled by the leg irons, scuffled up a short flight of steps and through a granite archway to a grated door. To the right were the outer offices leading to the warden’s headquarters. The turnkey, recognizing the party, opened the gate, and they stepped into a vestibule and turned left into the visitors’ room. It had the cozy, inviting appearance of a windowless mezzanine lounge in a major hotel: a reddish brown rug; occasional chairs with lamps and stand-up ash trays, for visitors waiting their turn; walls tastefully done in tan and adorned with framed prints.