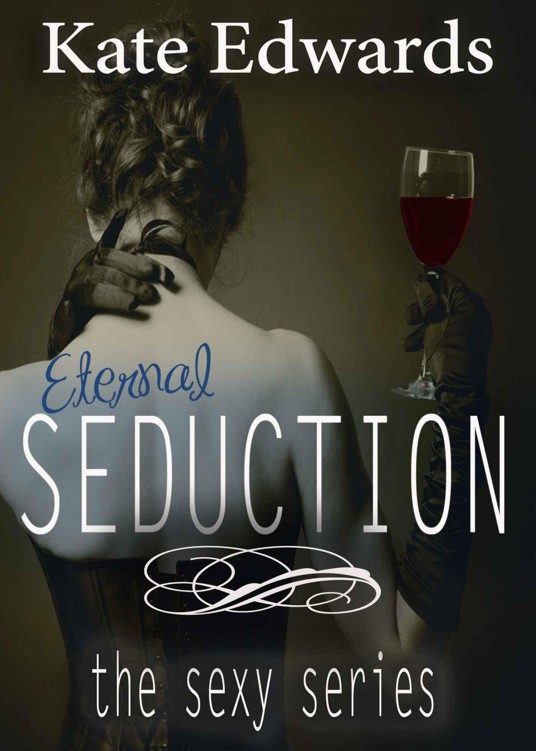 Other Books by Kate Edwards

Cover design by Leilani Bennett at:

This ebook is licensed for your personal enjoyment only. This ebook may not be re-sold or given away to other people. All rights reserved.

I then let out a primal yawn that nearly rocked the portraits and crucifixes, which hung by the thinnest of strings off the plain white wall.

I was face-first into the cold side of my favorite pillow. I could feel the sting on my neck from the garish morning sun peeking through the plain curtains that covered the one and only visual portal to the outside world; a strip mall, which featured a Filipino restaurant named
Manila Joe’s
.

“
You’re here? When did you get in?” asked the frail voice from my bedroom doorway. Sister Luz was young, demure and extremely shy and was never partial to confrontation. Her eyes always bugged out as if she were frightened by every noise, smell or sight that surrounded her. But no, she wasn’t actually afraid, poor thing just had a face that looked to be in state of permanent terror.

“
Nevermind, I didn’t mean to pry,” she said. “Sister Janice sent me an email. She asked me to tell you that you must attend to your morning, afternoon and evening prayers...and that...and that...” I could hear her swallow as I lay in bed. “...your internet has been shut off.”

The flight from Paris was turbulent, uncomfortable and bumpy. I was jet-lagged and didn’t get any sleep on the plane. I wasn’t in the mood to unlatch my body from the depths of my mattress, let alone walk down the convent’s flight of stairs. “I need to sleep, Luz. I’ll join you later for lunch.”

“
Okay,” said Sister Luz, her voice trailing off as she exited the room. Instantly, she came back and stuck her head into my room for one last brief moment. “Welcome back, Sister.”

I still laid in bed with my head planted into my pillow like an ostrich who slips its bird-sized cranium into a hole. Legs immobile and stretched, I raised my arm at Sister Luz giving her thanks for the kind welcome.

I heard the phone ring. I lifted the receiver and plopped it back down. It was probably my mother and I was too pooped to talk. No time for breakfast, no time for calls.

A few minutes later, my mind relaxed itself into a clean slate. My breathing became synchronized with my heart rate as I slipped into nothingness. My subconscious toiled in the nether-regions of coitus as I began to dream about visual mutations of my sexual experiences. I cupped E’tienne’s genitals in my hand. Slowly rubbing the tip of his head, trying my hardest to get his penis aroused in record time. I don’t know why I often dream of rubbing a penis, it must have something to do with the power of arousing another human being and seeing the successful results instantaneously in the form of an engorged and swollen shaft and head.

I knelt in a dark space. There wasn’t anything descriptive about where I was. Odorless, colorless, and timeless were the only words that could characterize the setting in my dream where I favored E’tienne.

As I stroked the silky, thin layer of skin up and down on his long shaft, another bodily form appeared from the darkness. A tall, muscular and bronzed figure with smooth, unblemished skin emerged from the mental fog. It was Jake’s nude physique, standing barrel-chested; his upper torso conformed down to a perfect V-shape right above his toned waistline. He stood still, flaccid and caring, and he coursed his fingers through my hair.

“
I love seeing you this way,” he said, while his thick lips curled to the right in a half-grin.

I kept jerking E’tienne off, his gorgeous blue pupils solely focused on me. I turned my attention toward Jake as he grappled my scalp and yanked my head back. “Want me to make you hard?” I asked.

I grabbed his half-erect dick, which was thicker than E’tienne’s, even though he wasn’t fully aroused, and I began massaging the curved underside of his head with my fingertip.

I was a lucky girl. I had a cock in each hand, which were connected to optimal examples of the male race. It took quite a bit of talent to keep both men fully aroused, but my naked body, which many men found irresistible, most likely kept them from losing their focus.

With a sudden shift in my hazy subconscious, I found myself on my back getting reamed by Jake as I sucked E’tienne off. The faster and more powerful Jake’s hips thrusted, the more I tugged on E’tienne’s luscious dick.

Taste and texture entered the dream. I felt the soft, fleshed constitution of his cock on my tongue. I was able to savor the musky aroma of his pre-cum as it penetrated the nerve endings of my taste buds.

But the dream instantly transformed into a nightmare. Sister Janice appeared. She was power personified and grabbed Jake by his shoulders and threw him to the ground. She walked toward E’tienne and pulled him by his dreads and spun him into the dark recesses of my mind. She gave me a harsh, squint-eyed stare which instantly cast shame unto my soul.

I curled up into a ball and began sobbing uncontrollably. I felt the sudden and extreme shifts of extrasensory sensation. One minute unbridled pleasure the next painful regret, like being punched in the deepest bowels of my stomach.

“
Sister, wake up,” said the trembling voice. “You’re having a nightmare.”

I opened my eyes. Sweat poured down my brows; my panties soaking wet as I awoke to Sister Luz sitting next to me in bed.

“
Sister, you...you had a nightmare,” she said, putting her hand on my head.

I sat up and began hyperventilating. “I need to go.”

“
I need to visit my mother,” I said, as I turned to Sister Luz. “Please, cover for me. I need to leave, do you understand?”

Sister Luz sat in the bed petrified over my bizarre behavior. Her mouth agape.

I stood up and grabbed my bag full of clothes which I hadn’t bothered unpacking since I got back from my flight. I turned to Sister Luz, “Just a couple of days. Sister Janice won’t be back for another week. Tell the other sisters my mother was sick.”

“
You’re asking me to lie?” asked Sister Luz, in a slight panic.

“
Listen, I know you’re the one who keeps stealing bottles of wine from the rectory.”

Sister Luz looked out the door and took a deep swallow. “How did you know?”

I grabbed my bag and hurriedly exited my room.

My mother’s home, while small and somewhat cluttered, was a marvel of obsessive cleanliness. There was not an ounce of dust surrounding any of the hundreds of religious-themed figurines lining everything from top of the fireplace to the shelves above the toilets in both of the home’s bathrooms.

My mom was elated to have me home, so much so, she slaved away the evening of my arrival preparing my favorite dish of biscuits and gravy.

I sat at the dinner table. I leaned to the right and noticed the etching of a bear I carved when I was 7 years old. Still looking fresh as if done a day ago, I smiled and reminisced as mother placed my plate in front of me.

“
You know, that is the primary reason why I haven’t bought a new table,” she said, with a smile.

“
I honestly thought you were going to grow up to be an artist,” she said, as she sat on the other end of the table.

I bit into the biscuit, my eyes lit up like torchlights. Nostalgia and wonderment overwhelmed my senses. “My goodness, this is amazing,” I said, catching a large crumb from rolling off the side of my lip.

“
Oh yeah, sorry,” I said, while masticating gravy and biscuit mush. “You were right, the place is too dangerous.”

My mother’s brows curled up. They always did that when she was proven right. “I knew it. So what happened?”

“
Well, the war next door in the Congo spilled over the border and explosions could be heard just a few miles away. Only the die-hards stayed behind,” I said, again lying through my teeth. I would have to sacrifice an entire week of television and internet for penance as soon as I got back to the convent.

“
Is it okay if I stay here a couple of nights?” I asked.

Mother smiled from ear to ear. “Of course,” she said, with pep in her voice.

We continued our dinner late into the night, catching up on years of missed conversations and dialogue. It was good to be back home.

I woke
up to the sounds of sparrows chirping outside my window. I reached my arm out to tap the snooze button on my alarm clock, but instead knocked
Spirit
, the limited edition, albino My Little Pony off the nightstand.

Mom brought out all my old toys as soon as I left for the convent and placed them all over the room, probably to remind her of the good old days, where I would run into my parents’ bedroom and bounce on top of dad and her, while I begged for pancakes.

I got up from my twin-sized bed, which was decorated with a frilly princess comforter and matching bed set, and put on my slippers. I noticed a note stuck to the door. I got up and grabbed it, rubbed my eyes and aimed it toward the sunlight that shone through the bedroom window. It read,
Gloria’s in town, she wants to see you, call her 412-555-3657,
in mother’s beautifully skilled handwriting.

I folded the note and placed it on my dresser and headed to the kitchen to get a bowl of cereal. As I poured a bowl of Cap’n Crunch, I thought long and hard about getting in touch with Gloria. I didn’t think I was in the mood for an awkward meet-up that most certainly would involve discussing a certain situation in a hot tub. However, I grew up with Gloria, and we were practically sisters as we went through school together.

I picked up the cordless phone and walked into my bedroom with cereal bowl in hand, and dialed Gloria’s phone number.

Double Teamed: Sharing Jenna by Lexi Rush
Carpathia by Matt Forbeck
Magus of Stonewylde Book One by Kit Berry
Dead Wrong: Straight Facts on the Country's Most Controversial Cover-Ups by Richard Belzer, David Wayne
The Trailsman 317 by Jon Sharpe
The Rake's Mistress by Nicola Cornick
Delicious by Susan Mallery
Smash & Grab by Amy Christine Parker
The Ginormous Book of Dirty Jokes by Rudy A. Swale
The Secret Book of Paradys by Tanith Lee