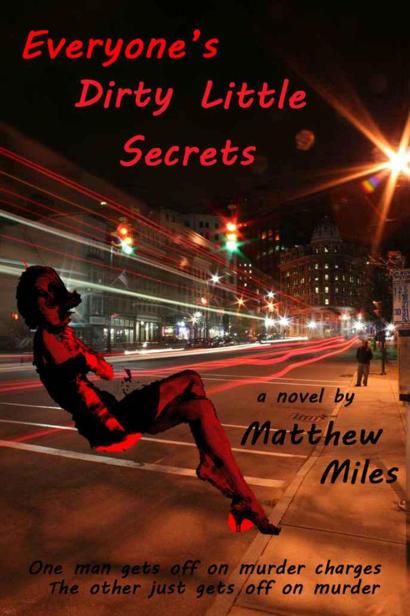 a novel
by
Matthew Miles

One
man
gets off on murder charges.

The other just gets off on murder.

A Novel by Matthew Miles

Special thanks to Earl for his editorial guidance.

And most of all to Amy, for always making room for a little creativity in our lives.

Any resemblance to real persons or events is, of course, purely coincidental.

The man in the mirror.

Another man in the mirror.

A woman in the mirror, body thumping with the techno beat against some other guy on the dance floor, hair tossed into the air, sweat breaking on her alabaster skin.

Another woman in the mirror, walking toward Dodge.  A cocktail dress sliding off of her shoulders, its sequins sparkling like a disco ball.

She wants to be his wife.

Not
as in married to him.

She wants to be Siobhan, his wife.

His wife, who owns her, who owns this party, who owns the company throwing the party, owns everything around her.

The man in the mirror.

A reflection of everything he thought he would be.

Only one
thing in this bar can
drag Dodge’s eyes from his own worried face, staring back at him in the mirror, from the reflection of his wife bouncing against every guy who comes near her, cutting up the dance floor.

His eyes don’t really drag, though.

They le
ap to Jaime
when he sees her coming.

Maybe it’s the sparkle of the sequins.  Maybe it’s the crooked smile, and all it promises.  Or maybe it’s just all the flesh jiggling its way out of her cocktail dress.

Yeah, it’s the flesh, he decides, watching her saunter toward him in the mirror, spaghetti straps sliding off her shoulders, loosening the cling of her dress to her breasts with every bounce she takes toward him.

Finding his eyes in the mirror, knowing she has his attention, the saunter gives way to more of a dance, a few sultry steps for his benefit, her torso shaking, her hips swaying to the thump of the house music, that dress containing less and less of her.

Christ, he imagines her damn near undressed by the time she reaches him.

Dodge takes a pull off his glass of bourbon – Makers on the rocks, wishing he could get as sloppy drunk as she is.

Falling out of his clothes drunk.

He needs more than booze for things to get really messy though.

The only kind of math that makes sense to him.

Chaos out of order.

“Sure could use a drink,” Jaime slurs, arriving at his side, leaning in close to him, sequins pressing into the flesh of his left arm, propped on the bar.  It might be the only thing keeping her from landing in his lap outright.

“What are you having?” Dodge asks, keeping his voice low and steady, despite the way she makes his heart pound, in time with the music, with the swelling of her ribcage.  “It’s on me,” he jokes.

“What, out of your allowance?” she jabs, smiling to soften the sting of her words.

The bar is open, drinks are on the company tab.  End of the fiscal year celebration.  Every July.  Company tab.  Siobhan’s tab.  Same difference.   Like everything in his life.  Not that he’s complaining.  Hell, he’s living the high life.

But money is a trap too.

“
A few
people here living on her money,” he reminds Jaime.  “Including you.”

“Yeah, but we got to work for it,” she laughs.  “You just got to sit there and look pretty.”

“So I hear,” she says, flashing a sly grin, eyelashes gently falling toward her cheeks.

“How about that drink?” he asks, changing the topic.

“Something wet,” she answers.

“How about something dry?” he counters, ordering her a martini, shifting his body to put a little distance between them.

“Don’t worry,” she chides, a hint of a sneer on her face.  “I think your wife’s got other things on her mind right now.”

Dodge follows her gaze out to the dance floor of the club, where Siobhan is crawling all over some dude, her dress scrunched up around her thighs, themselves wrapped around his knees, her back arched so far backwards one hand could touch the floor behind her, the other holding on his belt to keep her from falling over.

The guy himself seems frozen in a pelvic thrust, his arms going all Saturday Night Fever above his head.

Not a good moment to take a look.

“I suppose you’re right,” Dodge concedes, turning back to the bar, giving himself a fake smile in the mirror as he feels the sequins of Jaime’s gown pressing
back
into the flesh of his ar
ms
, her hand falling to his thigh as she leans forward to lift the martini just delivered by the bartender.

“Who is he?” he asks, deciding to ignore Jaime’s advance.

He doesn’t acknowledge it, but he doesn’t stop it either.

“Client,” she answers, gulping the martini.  “Big account.  Family money, public image problems.  Personal PR.  Not our normal stuff.  But he insisted.  Good for us.  He probably paid for this party just in the last 6 months.”

“Rod Dressler.  You know the name,” she assures him.

Dodge does some w
ork on the sly for Siobhan, but
Jaime doesn’t know it.  Nobody knows it.

He digs up dirt on people for some of Siobhan’s clients.  For Dressler.

So, yeah, he knows the guy.

The police have hated Dodge ever since.

“Then that’s your boy,” she says, nodding her head back at the dance floor.  “But you haven’t seen him in the gossip pages in a while.”

“Ha,” she snickers.  “Reformed image.  Siobhan is the queen
of this
business.”

And Dodge is the dick.

“She is good at what she does,” he concedes.

“She’s doing it right now, matter of fact,” Jai
me adds.  “Men
are falling over themselves to
hire her - schedule
meetings, lunches, cocktails after work.”

Lluvia negra by Graham Brown
My Demons (The Angel Trilogy #2) by Kimberly Blalock
Fallen Desire by N. L. Echeverria
Life on the Ramona Coaster by Ramona Singer
The Corporal's Wife (2013) by Gerald Seymour
One Night Stand with the Rockstar (With the Rockstar #1) (rockstar romance series) by Fawkes, Ana W.
Cast in Ruin by Michelle Sagara
Mail-Order Bride by Debbie Macomber
Shattered Souls by Delilah Devlin
Teaching Roman by Gennifer Albin