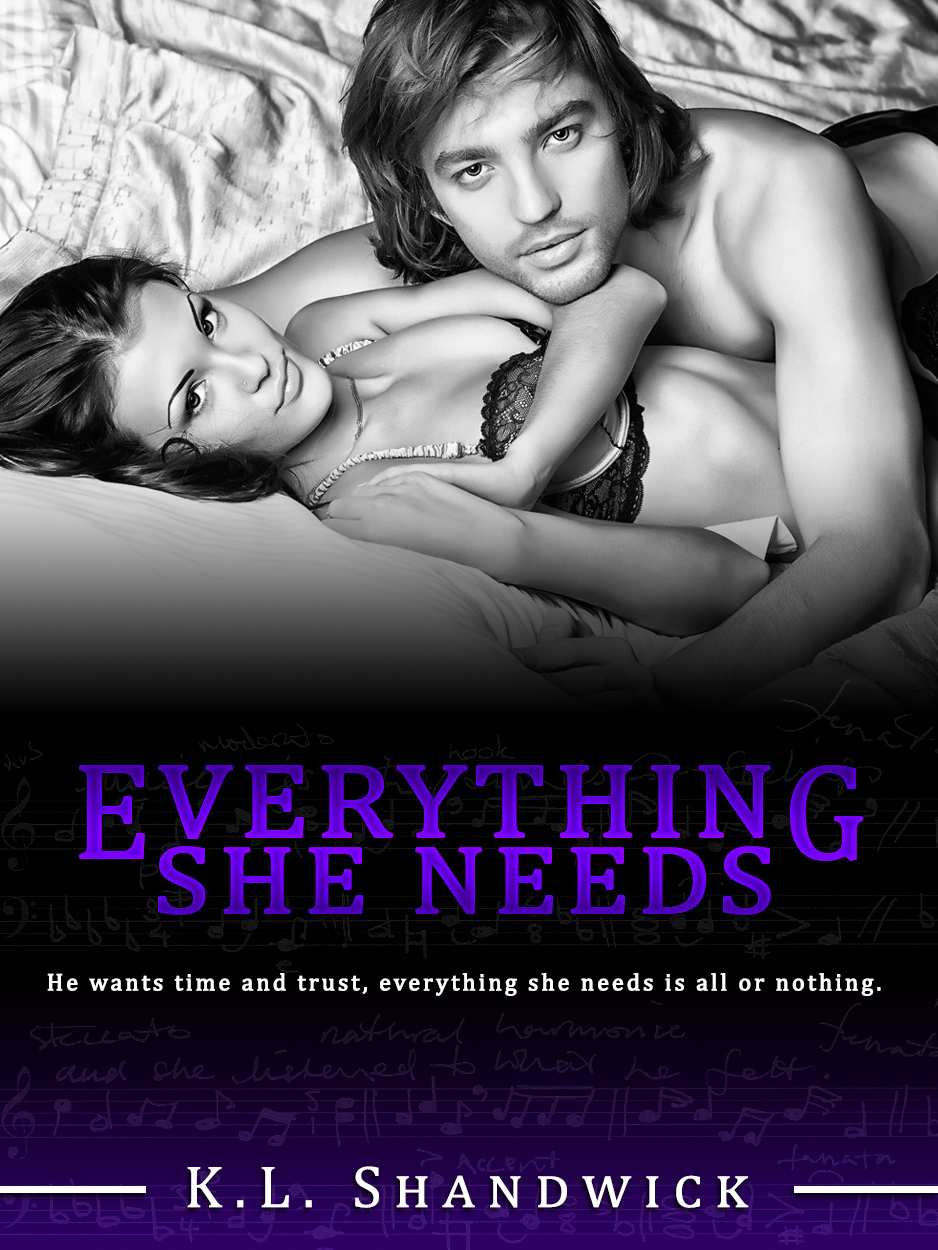 Copyright ©
K.L.Shandwick The author of the book

The author has asserted their moral right under the

Copyright, Designs and Patents Act, 1988, to be identified

as the author of this work.

All Rights reserved. No part of this publication may be reproduced, copied, stored in a retrieval system, or transmitted, in any form or by any means, without the prior written consent of the copyright holder, nor be otherwise circulated in any form of binding or cover other than that in which it is published and without a similar condition being imposed on the subsequent purchaser.

Disclaimer: This ebook has explicit reference to sexual situations and is intended for adult readers aged 18+.

This
ebook is a work of fiction, Names, places, characters, band names and incidents are the product of the author’s imagination or names are used within the fictitious setting. Any resemblance to actual person’s living or dead. Band names or locales are entirely coincidental.

CHAPTER 35 – WORKING IT OUT

“Lily,
honey, you should at least try to fight this. You need to come and eat.  You know jet lag will keep you awake again if you don’t.” My mom’s voice reminded me I was home.

“Elle rang.
She’ll be here in a minute, so I want you to get yourself out of bed and shower. Oh, and I’m going to put the light on to help you stay awake.”

My mother flicked the switch with a click, and the ceil
ing light blared down at me. I felt assaulted by the strength of the light on my weary, bloodshot eyes. I pulled the duvet up over my head as I struggled to find the willpower to drag my sorry ass out of bed.

I rolled over and squinted at the clock by my bedside
; it read 5:00 It was only five pm?  My eyes rolled shut again. I was going to have to make it through several hours of questioning about the last three months of my life, by the three people who knew me better than most.

I would definitely have to have my wits about me for that, otherwise they’d know what a
clusterfuck I’d been making of my life in Florida since I went there to study.

To be honest, my mind was in suc
h a mess that I wasn’t sure if I wanted to face all the shit I’d brought on myself since going to live with my longtime friend Saffy, and her friend Holly, in Miami.

I turned on the shower faucet and tested the water with my hand. The temperature was just right. I stood
underneath the spray, anticipating the questions my parents and Elle, my friend since I was ten years old, might ask. I tried to formulate some answers that would sound convincing.

Stepping
out of the shower on to the fluffy shower mat, I wrapped a baby blue towel around my body before padding back through to my bedroom.

Even with
the central heating on, I was shivering and missed the warm air of Miami. When I left there to fly home, it was still regularly hitting seventy degrees
Fahrenheit.
I would be lucky if it was twenty-five here.

I rummaged
through my purse to find my cell phone. The battery had died just after I’d spoken with the driver my parents had sent to pick me up.  I flew into Heathrow International on the overnight flight from Miami and was relieved to discover that the final part of the journey had been taken care of for me.

I was conscious that I hadn’t rung Will yet to let him know I’d arrived home safely. I promised I would, but I
was just so dog tired I collapsed into bed as soon as I saw it.

Since meeting Will, my studies in Florida h
ad taken a turn for the better. I met him and my other, now close, friends Mandy and Neil on my first day on campus at Miami University.  They were all music majors like me, and Will, in particular, formed a musical alliance with me, which had pushed me to grow as a musician and even more as a performer.

Although Will had driven me to the airport, some complex issues
had arisen during my last week in college that left our collaboration in the balance. We had been to a beach bonfire party for Mandy’s birthday, organized by Neil, her boyfriend.

Will was dating
Saffy, my friend and roommate. He had met her through me, at a gig I took her along to, the first night of college.  Saffy has been my best friend stateside since I was fourteen. She was a US citizen, and I realized a longterm plan to share an apartment with her three months ago when I went to study there.

I’ve been nursing a massive guilt complex around
Saffy and felt like a shitty friend.  I had oral sex with Will after he initially mistook me for Saffy when I was asleep in his bed. It was a long story.

Saffy
had gone home from the bonfire party after arguing with Will. So, as the designated driver for the party, I took him home.

He was so drunk
he was just put to sleep on the couch. As he was so out of it, I decided to stay and check on him so that he didn’t choke or anything during the night.

I thought about blaming it on the alcohol, what transpired between us next, but I guess no amount of alcohol
made what Will and I did okay. If I was Saffy, I knew I’d hate to have a friend like me.

My weakness with Will was yet another monumental fuck
-up in my life.  I seemed to be so proficient at making them ever since becoming involved in sexual relationships.

These crap decisions had no rhyme or reason to them
, and I seemed to be incapable of showing any sort of backbone when it came to resisting a man’s sexual advances.

I plugged the charger into the
wall and my cell phone and went to my wardrobe to find some warm clothing to wear. I pulled out a jade green cashmere sweater and some skinny jeans, shivering as I pulled on my underwear, and dressed quickly.

My jeans were a little loose.
I’d lost about seven pounds since I became responsible for feeding myself. I still felt tired, but when I caught sight of myself in the mirror, my mouth curled in a half smile.  My skin glowed from my tan, and I had a healthy look about me.  I headed to the kitchen to see my parents.

Dad pushed the chair back, making a
scraping sound as he stood, and made his way toward me. His mouth curled into a smile that lit up his face. “Hello darling, I’ve missed you so much.” He wrapped his arms around me and pulled me into a bear hug.

I clung tightly to my dad’s waist, not caring that the
woolen sweater my dad hated to wear, but my mum insisted on buying him, was scratching my cheek. The fibers smelled musky and like the fabric softener my mum added to absolutely everything.

Cuddling my
dad felt amazing.  His strong arms made me feel safe, and it took everything I had not to burst into tears after the emotional turmoil I had been in for the past three months.

He pushed himself away
and asked, “Hungry, love? You need to eat something.  Mum has made some pasta and sauces, or I could make you an omelette?” I smiled warmly, thankful that my parents were so sweet and supportive of me. “Pasta sounds great, Dad.”

As he sprung to life, getting dinner ready, the doorbell chimed
, and I heard the front door open and close. “Hey, Roslyn is she up and about now?” My heart sped with excitement, Elle had arrived.  I jumped out of my chair and opened the kitchen door to see her running along the hallway with open arms. “
Lily
!” She grabbed me and hugged me off of my feet.

Giggling, she set me
down then did a little happy dance in front of me.  Elle had an amazing personality, so bubbly and funny, everyone loved her. I was just in awe of her.  She and Jack, my best male friend, were special to me, and I was so lucky to have them in my life.

Elle studied dance and was currently in a West End production of
‘Boxed Fire’, a fast paced musical with some well-known stage and screen actors.

The musical was a bit like
‘Moulin Rouge’
,
with burlesque dancers, and Elle was the current lead.  I was so proud of her.  It had been her dream to dance on a West End stage since the moment I’d met her.  So I wasn’t surprised by her success.

I was ashamed that I hadn’t made more of an effort to keep in touch with her or Jack since moving.  My life had taken turns I never expected
, and I seemed to be involved in one drama after another.

There was also the small matter of my relationship
, or non-relationship, with Alfie.  He was the guy I met on campus during the induction day and registration prior to actually starting my first day proper on campus.

Just thinking about him g
ave me a sinking feeling in the pit of my stomach and squeezed my heart.  I struggled with my feelings about him on the flight all the way home.

I knew what I was doing by
placing the space between us.  It didn’t stop me from feeling bereft at not being able to catch glimpses of him though.  Especially since I’d fled back to the UK for Christmas as a precaution.

I sometimes wished I’d never met him. Alfie
was drop-dead gorgeous, and had a sexy charm.  I would defy any woman not to drop their panties for him.

The thing
was, he had been a total mind fuck. He didn’t do emotional relationships, but had played with my heart. The mind games he played had me seriously worrying about my own mental health at times.

Alfi
e did warn me not to become emotionally involved, and I absolutely fell for him in spite of it. I currently didn’t know whether my head or my cracked heart would ever recover after being with him.

Alfie had made a proposition that the old Lily
, as naïve as I was, would have laughed at.  I would have sent him packing, telling him to get over himself; he wasn’t all that.  But then again…he was.

So, I have no clue what I was thinking, apart from getting laid by an exceptionally hot rock-star in the making.

The circumstances that followed led me into a car crash of a relationship with him.  Why I agreed to a friend-with-benefits relationship, or to be his ‘fuck buddy’, was beyond my comprehension.

So, I had run
back to the safety of London and my friends and family, whilst I figured out how to deal with everything that had happened since the summer.