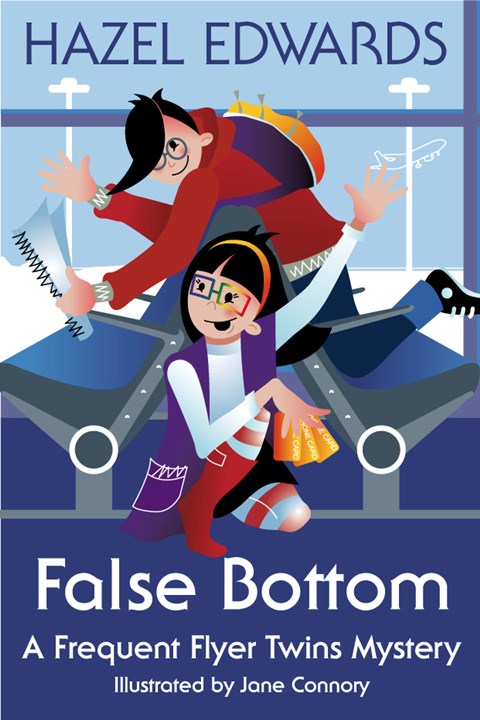 Illustrated and designed by Jane Connory.

Amy and Christopher are twins AND international sleuths.

Their eco-photographer parents travel often. So the twins fly to meet them.

Together they solve mysteries in the air and at international airports.

Airport security changes fast. If our Frequent Flyers travelled tomorrow, there would be new regulations and electronic devices.

Some of their past mysteries were solved without the technology we have now.

Also in the Frequent Flyers Series, by Hazel Edwards.

Illustration and design by Jane Connory.

All electronic rights reserved. No part of this book may be reproduced, stored in a retrieval system, or transmitted by any means, electronic, mechanical, photocopying, recording, or otherwise without written permission from the publisher. Although every precaution has been taken in the preparation of this book, the publisher and author assume no responsibility for errors or omissions. Neither is any liability assumed for damages resulting from the use of the information contained herein.

Chapter 19 The Lizard of Oz

âIs Wilhelmina one of your relatives?' asked the airport attendant politely.

The twins laughed. âWilhemina is a goat. She belongs to Aunty Viv's Animal Actors business.'

Amy remembered that earlier embarrassing moment. How could she ever forget?

âHey! You can't park here. This is a No Standing zone!'

The international airport was big. And so was the parking officer.

âIf it's only No Standing,' said Amy politely, âwhat about sitting? Would we still get a parking fine?'

The animals in the back of the Animal Actors mini van made a fuss.

âI've heard lots of excuses for parking in the wrong place. But I've never put a parking ticket on a goat. Where are you flying to?'

âSometimes. Our mum's from there and our dad's Australian. But mostly we live here in Sydney.'

The twins looked alike with their black hair, glasses and jeans but they were good at different things. Christopher was the artist and Amy was the collector. She collected stickers, stamps and clues. Solving mysteries was her favourite hobby. And she wore badges with slogans on them like Save The Trees and Save Anything all over her jacket. Bumping into the twins was dangerous. Amy's badge pin might stick into you. Or Christopher might sketch you.

Christopher was too slow. The tickets vanished between Wilhelmina's moving jaws.

âSorry about that. Wilhelmina has snack attacks,' Aunty Viv said.

âI'll only stay long enough to check the twins in.' Aunty Viv stopped the goat nibbling. Christopher's name tag was in danger.

âThen my animals have to perform. They're in a Petty Pet Food TV commercial today.'

Just then, some of the name tag on Amy's backpack vanished. Only the Y was left. AMY LEE, CLARKE RD, SYDNEY vanished into the goat's mouth.

The goat took off, dragging her chain behind her.

The chain clanked. It caught around poles. It dragged against parked cars.

Amy and Christopher ran between the cars chasing her.

Muddled on the ground were the twins, Wilhelmina and the chain. The bumper bar clanked as they moved.

âPut the bumper bar back,' said Aunty Viv, scribbling a note. She stuck the note on the windscreen of the old car. âI've left my name and insurance company. They'll know it's me, again!. Bring Wilhelmina over to the van.'

Aunty Viv tied the goat to the rubbish bin stand. She used a special knot.

âWilhemina might eat that rubbish.' Amy said, and looked at the bin full of lolly wrappers, banana skins and a crumpled pop magazine. A pop singer The Mouth and the singer's little dog Bozo were on the cover.

The goat put her head into the bin and took a bite of the magazine.

The twins laughed. âPerhaps we should call her that!'

âI'll be back very soon,' Aunty Viv shouted to the parking officer's back.

He left in a hurry before anything worse happened.

Quickly the twins carried their luggage through the touch- open doors. They liked travelling alone, even if listed as Unaccompanied Minors, under the care of the flight attendant.

REPTILE SMUGGLERS ARRESTED said the headline on the newspapers outside the airport news agency. Amy glanced at the story underneath. Luckily she was a superfast reader . She sped through the news. Wildlife officers had caught two smugglers with frozen lizards stuffed in socks.

Amy didn't have time to buy a paper now. She'd read the rest on the plane. Newspapers were free on board. Amy liked to keep up with any international news or do the puzzles. Christopher usually read the cartoons if he wasn't watching movies.

Aunty Viv checked them in. Amy wrote out another label to replace the nibbled one. Their bags disappeared carried away by the moving belt. The twins collected their seat numbers.

âGate 8. Flight Q9. Okay? I'll have to go, before my animals cause a traffic jam or get booked again! Give my love to your parents. If the plane crashes over water, swim backstroke the way I taught you.'

Aunty Viv's black Doc Martens thudded across the departure lounge. As she turned, her long black skirt swished over a rubbish bin. It fell loudly, rolled in front of an old woman in a wheelchair being pushed by a tall, bearded man.

âCareful!' The bearded man said, and picked up the bin.

âSorry, said Aunty Viv. âSee you, Amy. Have fun, Christopher. Draw me the best orchid you see in Singapore.'

âBye, Aunty.' As Christopher waved, the woman in the wheelchair muttered. Her escort nodded. People usually did stare at their black T- shirted Aunty.

Amy preferred travelling without parents or Aunty Viv who was always warning them about what to do when they crashed.

âIt's gone! Look. Q9 is missing,” Christopher said, pointing at the board.