Their long-ago affair ended too abruptly. And Dr. Micah Westmoreland knows Kalina Daniels hasn’t forgiven him. But now that they’re working side by side, he can’t ignore the heat that still burns between them. This time, there will be no question about his motive…he plans to make her his.

“Jackson’s trademark ability to weave multiple characters and side stories together makes shocking truths all the more exciting.”
—
Publishers Weekly

“Possibly [the] sexiest entry in the Westmoreland series… Jackson has the sexiest cowboy to ever ride the range.”
—
RT Book Reviews
on
A Wife for a Westmoreland

“This is entertainment at its best.”
—
RT Book Reviews
on
Star of His Heart

Wow! It’s time to savor another Westmoreland. I actually felt the heat between Micah and Kalina while writing their story.

Feeling the Heat
is a story of misunderstanding and betrayal. Kalina thinks Micah is the one man who broke her heart. A man she could never love again. Micah believes if Kalina really knew him she would know he could never cause her pain. So he is determined that she get to know the real Micah Westmoreland. He also intends to prove that when a Westmoreland wants something—or someone—he will stop at nothing to get it, and Micah Westmoreland wants Kalina Daniels back in his life.

Relax and enjoy Micah and Kalina’s story. And with every Brenda Jackson book it is suggested that you have a cold drink ready. Be prepared to feel the heat!

Other titles by this author are available in ebook format.

is a die “heart” romantic who married her childhood sweetheart and still proudly wears the “going steady” ring he gave her when she was fifteen. Because she believes in the power of love, Brenda’s stories always have happy endings. In her real-life love story, Brenda and her husband of thirty-eight years live in Jacksonville, Florida, and have two sons.

A
New York Times
bestselling author of more than seventy-five romance titles, Brenda is a recent retiree who now divides her time between family, writing and traveling with Gerald. You may write Brenda at P.O. Box 28267, Jacksonville, Florida 32226, by email at [email protected] or visit her website at www.brendajackson.net. 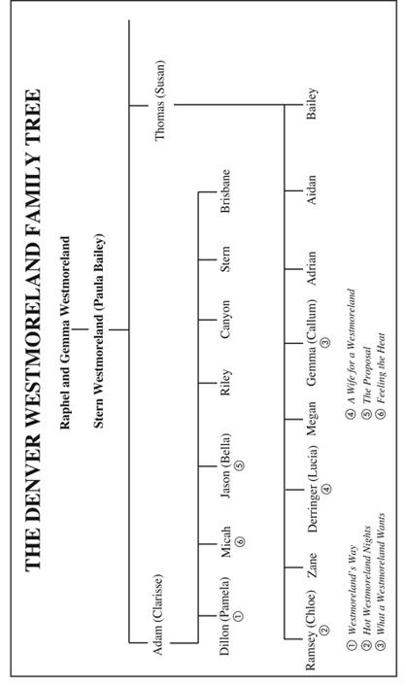 To Gerald Jackson, Sr.
My one and only. My everything.

To all my readers who enjoy reading about the Westmorelands, this book is especially for you!

To my Heavenly Father. How Great Thou Art.

M
icah Westmoreland glanced across the ballroom at the woman just arriving and immediately felt a tightening in his gut. Kalina Daniels was undeniably beautiful, sensuous in every sense of the word.

He desperately wanted her.

A shadow of a smile touched his lips as he took a sip of his champagne.

But if he knew Kalina, and he
did
know Kalina, she despised him and still hadn’t forgiven him for what had torn them apart two years ago. It would be a freezing-cold day in hell before she let him get near her, which meant sharing her bed again was out of the question.

He inhaled deeply and could swear that even with the distance separating them he could pick up her scent, a memory he couldn’t seem to let go of. Nor could he let go of the memories of the time they’d shared together while in Australia. And there had been many. Even now, it didn’t take much to recall the whisper of her breath on him just seconds before her mouth—

“Haven’t you learned your lesson yet, Micah?”

He frowned and shot the man standing across from him a narrowed look. Evidently his best friend, Beau Smallwood, was also aware of Kalina’s entry, and Beau, more than anyone, knew their history.

Micah took a sip of his drink and sat back on his heels. “Should I have?”

Beau merely smiled. “Yes, if you haven’t, then you should. Need I remind you that I was there that night when Kalina ended up telling you to go to hell and not to talk to her ever again?”

Micah flinched, remembering that night, as well. Beau was right. After Kalina had overheard what she’d assumed to be the truth, she’d told him to kiss off in several languages. She was fluent in so damn many. The words might have sounded foreign, but the meaning had been crystal clear. She didn’t want to see him again. Ever. With the way she’d reacted, she could have made that point to a deaf person.

“No, you don’t need to remind me of anything.” He wondered what she would say when she saw him tonight. Had she actually thought he wouldn’t come? After all, this ceremony was to honor all medical personnel who worked for the federal government. As epidemiologists working for the Centers for Disease Control, they both fell within that category.

Knowing how her mind worked, he suspected she probably figured he wouldn’t come. That he would be reluctant to face her. She thought the worst about him and had believed what her father had told her. Initially, her believing such a thing had pissed him off—until he’d accepted that given the set of circumstances, not to mention how well her father had played them both for fools, there was no way she could not believe it.

A part of him wished he could claim that she should have known him better, but even now he couldn’t make that assertion. From the beginning, he’d made it perfectly clear to her, as he’d done with all women, that he wasn’t interested in a serious relationship. Since Kalina was as into her career as he’d been into his, his suggestion of a no-strings affair hadn’t bothered her at all and she’d agreed to the affair knowing it wasn’t long-term.

At the time, he’d had no way of knowing that she would eventually get under his skin in a way that, even now, he found hard to accept. He hadn’t been prepared for the serious turn their affair had taken until it had been too late. By then her father had already deliberately lied to save his own skin.

“Well, she hasn’t seen you yet, and I prefer not being around when she does. I do remember Kalina’s hostility toward you even if you don’t,” Beau said, snagging a glass of champagne from the tray of a passing waiter. “And with that said, I’m out of here.” He then quickly walked to the other side of the room.

Micah watched Beau’s retreating back before turning his attention to his glass, staring down at the bubbly liquid. Moments later, he sighed in frustration and glanced up in time to see Kalina cross the room. He couldn’t help noticing he wasn’t the only man watching her. That didn’t surprise him.

One thing he could say, no matter what function she attended, whether it was in the finest restaurant in England or in a little hole in the wall in South Africa, she carried herself with grace, dignity and style. That kind of presence wasn’t a necessity for her profession. But she made it one.

It had been clear to him the first time he’d met her—that night three years ago when her father, General Neil Daniels, had introduced them at a military function here in D.C.—that he and Kalina shared an intense attraction that had foretold a heated connection. What had surprised him was that she had captivated him without even trying.

She hadn’t made things easy for him. In fact, to his way of thinking, she’d deliberately made things downright difficult. He’d figured he could handle just about anything. But when he’d later run into her in Sydney, she’d almost proven him wrong.

They’d been miles away from home, working together while trying to keep a deadly virus from spreading. He hadn’t been ready to settle down. While he didn’t consider himself a player in the same vein as some of his brothers and cousins, women had shifted in and out of his life with frequency once they saw he had no intention of putting a ring on anyone’s finger. And he enjoyed traveling and seeing the world. He had a huge spread back in Denver just waiting for the day he was ready to retire, but he didn’t see that happening for many years to come. His career as an epidemiologist was important to him.

But those two months he’d been involved with Kalina he had actually thought about settling down on his one hundred acres and doing nothing but enjoying a life with her. At one point, such thoughts would have scared the hell out of him, but with Kalina, he’d accepted that they couldn’t be helped. Spending time with a woman like her would make any man think about tying his life with one woman and not sowing any more wild oats.

When he’d met the Daniels family, he’d known immediately that the father was controlling and the daughter was determined not to be controlled. Kalina was a woman who liked her independence. Wanted it. And she was determined to demand it—whether her father went along with it or not.

BILLIONAIRE (Part 3 & Part 4) by Jones, Juliette
Her Perfect Match by Kate Welsh
Scorching Desire by Lila Dubois, Mari Carr
Dead and Buried by Anne Cassidy
Kissa Under the Mistletoe by Courtney Sheets
Full Throttle (The Revved Series) by Masters, Colleen
The Sheikh's First Christmas - A Warm and Cozy Christmas Romance by Rayner, Holly
The Love of a Lawman, The Callister Trilogy, Book 3 by Jeffrey, Anna
A Brief History of the Private Lives of the Roman Emperors by Anthony Blond
Bodyguards by Kallysten