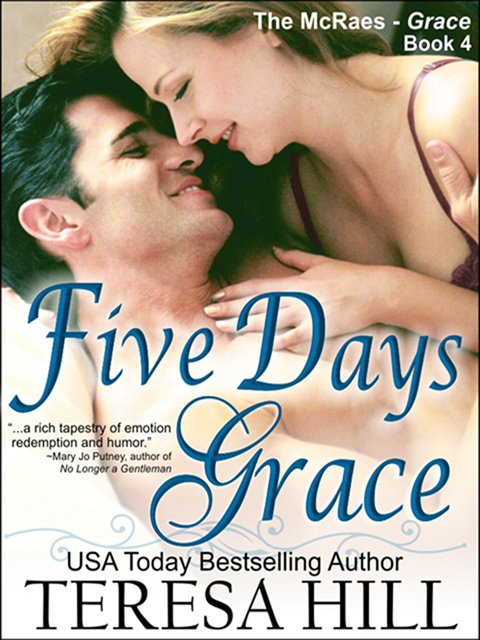 "Teresa Hill weaves a rich tapestry of deep emotion, redemption, and surprising humor with Five Days of Grace... a compelling romance about a wounded warrior, a bruised angel, and a healing love. Not to mention the dog!

Copyright © 2012 by Teresa Hill. All rights reserved under International and Pan-American Copyright Conventions.

It was believed to be the largest loss of life from a single mission in the history of the SEALS.

As a writer, I couldn't help but wonder what their last moments would have been like, knowing the helicopter was going down. A special memorial ceremony in Virginia Beach, Va., a Navy Captain gave us the answer.

They'd plan on surviving and fighting on. They'd have their weapons in hand, their minds racing with contingency plans for what they'd do once on the ground: who'd go out which door first, who'd set the perimeter, what threats they'd likely be facing.

It was an image that humbled and saddened me. It also made the writer in me wonder, what would it take to make a man like that ever give up? Which is how
Five Days Grace
came to be.

My hero is not a SEAL, but he works with them and he knows a lot about loss.

and everyone who loved them.

Special thanks to Ali Cunliffe, my editor; Pam Baker, first-reader, writer and friend; "joesig" for his moving account of the memorial; Nina Paules and everyone at
ePublishing Works
and its sister companies, who so carefully and skillfully prepare and distribute my work in ebook form; and to Amazon.com, Barnes & Noble, iBooks, Sony, Kobo and the rest for creating a marketplace where writers can get their work directly into the hands of readers. It's a wonderful and exciting time to be a writer.

Also to my sweet husband, who's really funny when he's waking up after having anesthesia, and to everyone who sent extra angels to watch over my daughter.

Everyone said so, from the moment almost twenty-nine years ago when she landed, in a basket with a big, red bow, on the doorstep of a beautifully restored Victorian home on Christmas Eve. That was the most popular version of her life's story, considered a holiday miracle if ever there was one.

It wasn't exactly true, but everyone loved happy stories. More importantly, people needed them. Grace knew that. So unless someone specifically asked, she didn't tell the whole truth of how she came to be Grace McRae. Which was that she and her older brother and sister were abandoned in a cheap motel for days after their birth father nearly beat their birth mother to death. A social worker delivered them to that doorstep in Baxter, Ohio, in the middle of December. Grace arrived with no basket and no red bow, but a sense of rightness and Christmas miracles all the same.

As far back as Grace remembered, she had always been the beloved and adored daughter of Sam and Rachel McRae, and the luckiest moment of her life had been landing on that doorstep. The people inside were the salt of the earth, hard-working, kind, and heart-broken over their inability to have children, including a baby girl lost before she was even a day old. It was an awful thing that had happened to two very nice people, the kind of thing no one understood, that left people railing at God over the injustice of it all.