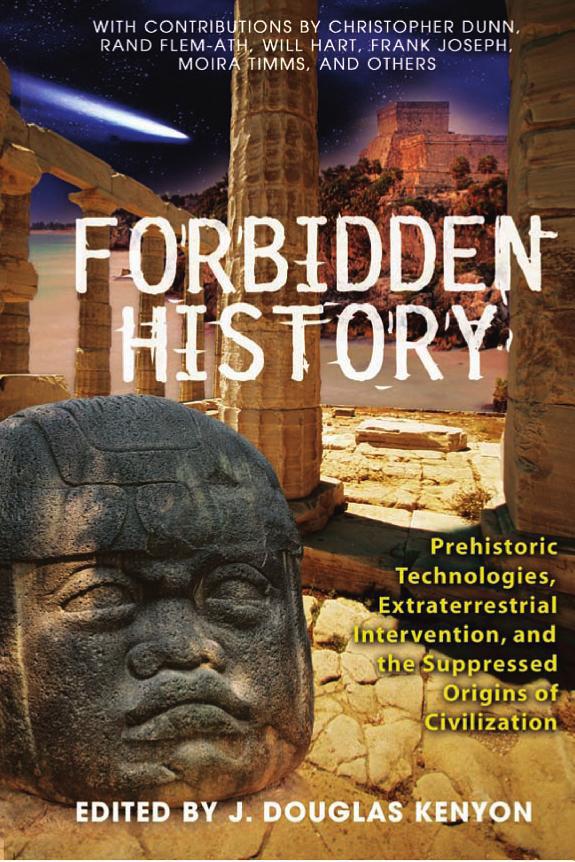 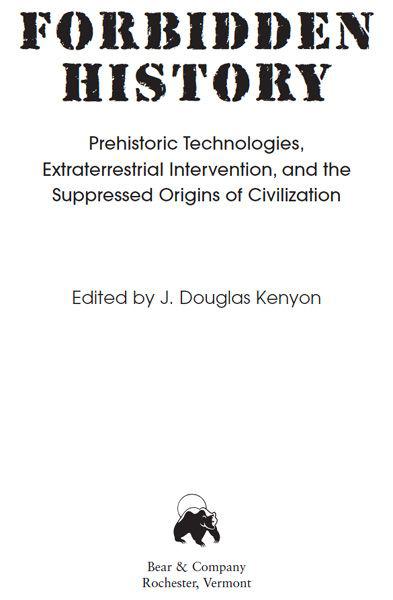 To the growing number of scientists and scholars willing to risk their professional prestige, perks, and privileges for the sake of something as ephemeral as the truth.

Were it not for
Atlantis Rising
—a bimonthly magazine—and associated projects, this book would not have been possible. All of the resources that for the last ten years have gone into the making of that periodical have also served to create this book. The people who helped to actualize
Atlantis Rising
are the same ones who made
Forbidden History
a reality. And while it is true that this book represents only a small sampling of
Atlantis Rising
’s material it is nevertheless representative of the very best that the magazine has to offer. We are, of course, indebted, not only to the many thoughtful authors who contributed to the content of the current pages of the book, but to the magazine’s many other fine writers as well, who though they could not be included here, may yet find their efforts incorporated into future works.

In thanking those who have made this collective endeavor possible (which includes this book, the magazine, the educational videos, and our Web site:
AtlantisRising.com
), I must first acknowledge my lovely wife, Patricia. Without her loyal support and selfless cooperation, I probably would have spent the last decade in much less productive pursuits. High on the list are also my parents—my late father, John B. Kenyon, D.D., whose own questioning of conventional wisdom catalyzed my thinking at a very early age, and my mother, Bessie, who always backed me in everything I did, in every way she could, with every resource at her command.

Among the stalwart supporters who deserve special thanks are my original financial backers, John Fanuzzi, Gregory Mascari, and Michael Stern, as well as Bob and Judy Colee. A few years later Greg Hedgecock (since deceased), his wife, Dianne, and their son, Cooper, put their shoulders to the wheel and helped to stabilize what was then a somewhat shaky operation. Without the generous help of these extraordinary people, this book would certainly have never come about.

Deserving of special credit here is my partner of many years, Tom Miller, whose brilliant artistic contributions to our early covers helped to set us apart from the competition. Without his participation in so much of the thinking that went into our projects, it is difficult to imagine how things could have unfolded as wonderfully as they did.

Certainly no list of crucial helpers would be complete without Darsi Vanatta, whose diligent and tireless efforts in managing the
Atlantis Rising
office for some years now have kept everything working smoothly and growing at a very healthy pace.

There are many others whom I could also thank, but space here is limited, so I will simply say: You know who you are and you know what your contributions have been. Rest assured that you are not forgotten, nor are your efforts unappreciated. You know how much they mean to me, and how much I thank you for them.

PART
ONE
•
The Old Models Don’t Work: Darwinism and Creationism under Fire

1.
Darwin’s Demise: On the Futile Search for Missing Links
•
Will Hart

2.
Evolution vs. Creation: Is the Debate for Real?
•
David Lewis

WHAT ABOUT THE BIBLE AND CREATIONISM?

WHY LIMIT THE DEBATE TO WESTERN MODELS?

WHAT THE ANCIENTS KNEW

6.
The Case for the Flood: Exposing the Scientific Myth of the Ice Age
•
Peter Bros

7.
The Martyrdom of Immanuel Velikovsky: As Catastrophists Gain Ground, an Early Hero Gets Some Long Overdue Credit
•
John Kettler

8.
The Perils of Planetary Amnesia: As Evidence of Ancient Cataclysm Mounts, the Legacy of a Rejected Genius Is Reconsidered
•
Steve Parsons

OPENING THE MIND TO THE ELECTRIC UNIVERSE

9.
Thunderbolts of the Gods: Does Growing Evidence of an Electric Universe Reveal Previously Hidden Meaning in Ancient Mythology?
•
Mel and Amy Acheson

THE WEAPON OF THE GODS

10.
The Enigma of India’s Origins: The Dating of New Discoveries in the Gulf of Cambay Upsets the Orthodox Scenario for the Dawn of Civilization
•
David Lewis

11.
Pushing Back the Portals of Civilization: For John Anthony West, the Quest for Evidence of Advanced Prehistoric Civilization Is Bearing New Fruit
•
J. Douglas Kenyon

THE LEGACY OF SCHWALLER DE LUBICZ

SECRETS OF THE RED PYRAMID

TOWARD A PROPER EGYPTOLOGY

13.
R. A. Schwaller de Lubicz’s Magnum Opus: The Keys to Understanding the Wisdom of the Ancients Have Been Preserved
•
Joseph Ray, Ph.D.

14.
Fingerprinting the Gods: A Bestselling Author Is Making a Convincing Case for a Great but Officially Forgotten Civilization
•
J. Douglas Kenyon

15.
The Central American Mystery: What Could Explain the Failure of Mainstream Science to Unravel the Origins of Mesoamerica’s Advanced Ancient Cultures?
•
Will Hart

PART
FOUR
•
Searching for the Fountainhead

18.
Plato, the Truth: How Does the Credibility of the Best-Known Chronicler of Atlantis Stand Up?
•
Frank Joseph

19.
The Aegean Atlantis Deception: Was Plato’s Grand Tale Nothing More Than the Saga of an Insignificant Greek Island?
•
Frank Joseph

A CASE OF MISTAKEN IDENTITY

AN OCEAN OF SUNKEN ISLANDS

A LABYRINTH OF MISINFORMATION

A CONFUSION OF DATES

20.
Atlantology: Psychotic or Inspired? Media Stereotypes Aside, What Kind of Person Pursues Knowledge of a Forgotten Civilization?
•
Frank Joseph

22.
Blueprint from Atlantis: Doments of Ancient Monuments Have Something to Tell Us about the History of Earth’s Shifting Crust?
•
Rand Flem-Ath

MOTHER OF ALL MOTHERLANDS

WHERE HAVE ALL THE MAMMALS GONE?

27.
Ancient Agriculture, in Search of the Missing Links: Is the Inescapable Evidence of a Lost Fountainhead of Civilization to Be Found Growing in Our Fields?
•
Will Hart

28.
Atlantean Technology: How Advanced? What Does the Evidence Really Show?
•
Frank Joseph

29.
Archeology and the Law of Gravity: Orthodox Theory of Ancient Capability Tends to Cave In under Its Own Weight
•
Will Hart

WHAT MORE PROOF IS NEEDED?

30.
An Engineer in Egypt: Did the Ancient Egyptians Possess Toolmaking Skills Comparable to Those of the Space Age?
•
Christopher Dunn

THE GIZA POWER PLANT: THE PROOF

33.
Petrie on Trial: Have Arguments for Advanced Ancient Machining Made by the Great Nineteenth-Century Egyptologist Sir William Flinders Petrie Been Disproved? Christopher Dunn Takes On the Debunkers
•
Christopher Dunn

34.
How Did the Pyramid Builders Spell Relief? Do We Really Know Why the Ancients Used Such Giant Stones in the Pyramid’s So-Called Relieving Chambers?
•
Christopher Dunn

35.
Precision: Did the Ancients Have It? And If They Did, Should It Matter to Us?
•
Christopher Dunn

36.
The Obelisk Quarry Mystery: Do Egyptologists Really Know How These Monuments Were Created?
•
Christopher Dunn

37.
Behind the Pyramid’s Secret Doors: What Does Astonishing New Evidence Reveal about the Great Pyramid’s True Purpose?
•
Chistopher Dunn

38.
The Case for Advanced Technology in the Great Pyramid: What Does the Evidence Really Show about the Advancement of Its Builders?
•
Marshall Payn

39.
Visitors from Beyond: Our Civilization Is a Legacy from Space Travelers, Says Zecharia Sitchin, and His New Book Offers to Unveil New Secrets of Divine Encounters
•
J. Douglas Kenyon

40.
Artifacts in Space: For Author Richard Hoagland, the Trail of Ancient ETs Is Getting Much Warmer
•
J. Douglas Kenyon

41.
The Pulsar Mystery: Could the Enigmatic Phenomenon Be the Work of an Ancient ET Civilization? A New Scientific Study Makes the Astonishing Case
•
Len Kasten

42.
The Physicist as Mystic
•
David Lewis