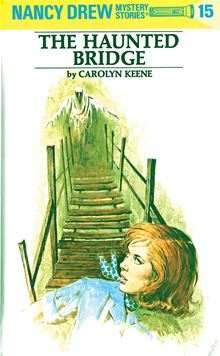 CHAPTER I - Invitation to Mystery

CHAPTER XIX - A Match of Wits

CHAPTER XX - A Day to Remember

Mr. Drew is on the trail of an international ring of jewel thieves and asks Nancy to assist him: The trail leads to a summer resort area. Before Nancy has a chance to start work on her father’s case, a golf caddy tells her a frightening tale. In the dense woods nearby is an old wooden footbridge guarded by a ghost! Intrigued by the caddy’s story, Nancy decides to investigate.

Several riddles confront the young detective as she attempts to solve the mystery of the haunted bridge and track down a woman suspected of being a key member of the gang of jewel thieves.

How Nancy finds the answers to the two mysteries and at the same time, despite her injured hand, wins a trophy in a golf tournament will thrill all Nancy Drew fans. 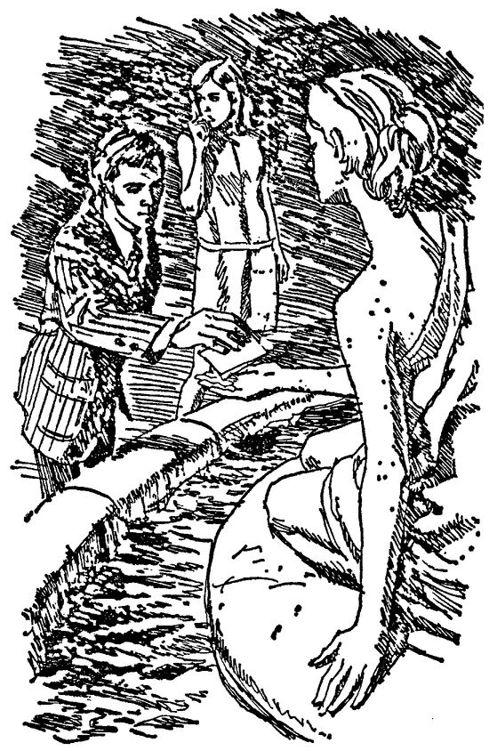 Ned placed the paper in the hand of the marble figure 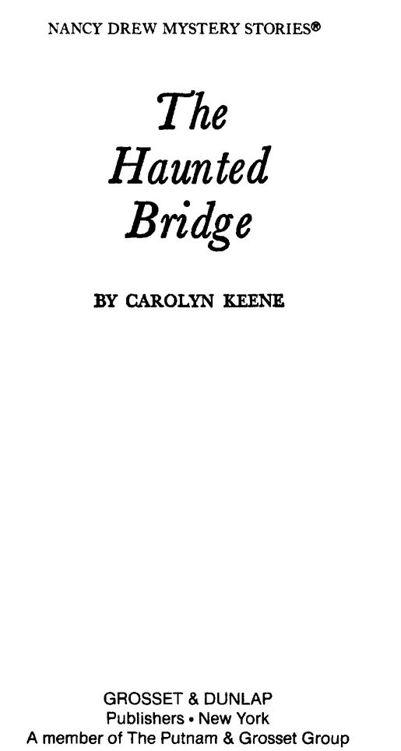 Acknowledgement is made to Mildred Wirt Benson, who under the pen name
Carolyn Keene, wrote the original NANCY DREW books

“SORRY, miss, but I wouldn’t go near that bridge for a million dollars,” said the young, freckle-faced caddy.

“Why, Chris?” Nancy Drew asked him.

She had just driven her golf ball over two hundred yards into a patch of woods bordering the sixteenth hole. A rustic footbridge stood at the far side of it.

“Because the place is haunted, that’s why.”

“What’s up?” asked George Fayne, a trim-looking brunette with short hair and a boyish name.

“The bridge in there has a ghost guarding it,” Chris replied. “Isn’t that right, fellows?”

The other caddies nodded and cast wary glances among the trees.

Nancy smiled. “What will the ghost do to me?”

“Who knows?” Chris retorted, and started to move off. “He sure wouldn’t let you take your ball, and he might strike you. Come on! Take a penalty stroke.”

“I guess we’d better,” Bess agreed. “There’s a foursome right behind us. Shall I signal them to play through?”

Her caddy was obviously relieved. “You couldn’t have played from behind all those trees, anyway,” he said.

“It’s a shame,” George commented. “You had such a great score up to now, Nancy. I hate to see you lose a stroke.”

Nancy’s curiosity about the haunted bridge distracted her attention from the game, and she scored a disappointing double bogey for the hole.

“Oh, you should have had a par,” George murmured sympathetically.

Nancy smiled. “I’ve learned never to count my score until the last hole is played.” 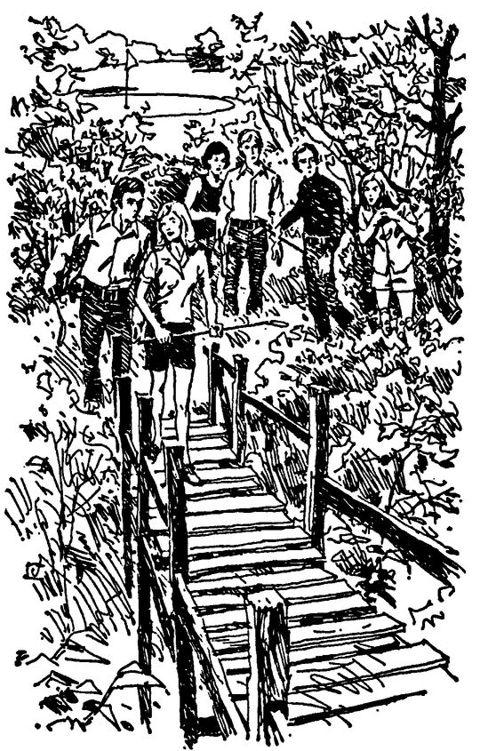 Nancy smiled. “What will the ghost do to me?”

“You’ll certainly qualify for the tournament,” Bess insisted. “That is, if you don’t let your mind wander off on the mystery.”

The three girls were spending a few weeks at the Deer Mountain Hotel as guests of Nancy’s father, Carson Drew. He had come there on legal business. The summer resort with its many sports activities was a contrast to the comparative quiet of River Heights, their hometown, and the girls were enjoying every minute of the vacation.

Before their arrival, Mr. Drew had hinted that he might ask Nancy to aid him with a puzzling case he was handling. As yet, he had not explained what the work involved. During the lawyer’s lengthy absences from the hotel the girls had been swimming and playing tennis and golf.

George and Bess thoroughly enjoyed golf. Both played well, but it was Nancy’s scores which had attracted the attention of the club’s golf pro. He had urged her to enter the qualifying round of an important championship tournament for amateur golfers to be held shortly.

Nancy felt she could offer little competition to the excellent women players at the hotel. But Bess and George had persuaded her to try out and finally she had consented.

When they approached the eighteenth tee they noticed that another player was there ahead of them. He was a tall, thin man in his late twenties, immaculately dressed in white slacks. Bushy black hair and a beard partially covered his angular, hard face.

The warning was too late. Bartescue had seen the girls. He waved and waited for them to approach.

“We would have to run info him!” Bess commented in disgust.

Martin Bartescue had met the girls the previous evening and immediately he had tried to make a golfing date with Nancy. Although she had heard the man was a very good player, she had taken an instant dislike to him, and politely declined the invitation.

Obviously he liked to brag, and she doubted the truth of his many stories of being friends with famous people. Now, as the girls seated themselves on a bench directly behind the driving area, he did not tee off. Instead, Bartescue smiled and walked over to them.

“May I have the honor of playing in with you young ladies?” he asked engagingly.

“We may as well all walk together,” Nancy replied politely but with no warmth in her voice.

She drove a long, straight ball, while Bess and George played somewhat shorter ones down the fairway. Bartescue’s drive outdistanced Nancy’s. As the group moved along, he walked beside her.

“You play a fine game, Nancy,” he said. “I was just thinking that you might like to enter the mixed foursome tournament with me next week. Together we should win first place.”

Smile for Me by T.J. Dell
Oracle by Jackie French
3 Breaths by LK Collins
Tears on a Sunday Afternoon by Michael Presley
Alibi: A Novel by Kanon, Joseph
The Second World War by Antony Beevor
Welcome to Paradise by Jill Tahourdin
Beers, Lies and Alibis (Warblers Point Series Book 2) by Meghan Quinn
Little Black Lies by Sharon Bolton
Home from the Hill by William Humphrey