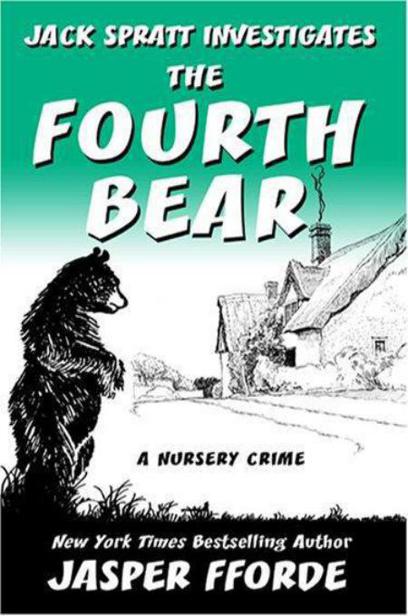 The second book in the Nursery Crime series

“DCI Spratt of the Nursery Crime Division,” announced Jack, holding up his ID. “Put down the scissors and
step away from the thumb.”

Because the Forest will always be there… and anybody who is Friendly with Bears can find it.

1. A Death in Obscurity

Last known regional post-code allocation:
Obscurity, Berkshire, Pop.: 35. Spotted by an eagle-eyed official and allocated in April 1987, the post-code allocation (RD73 93ZZ) was a matter of such import among the residents of this small village that a modest ceremony and street party were arranged. A bronze plaque was inscribed and affixed below another plaque that commemorated the only other event of note in living memory—the momentous occasion when Douglas Fairbanks Sr. became hopelessly lost in 1928 and had to stop at the village shop to ask for directions.

The little village
of Obscurity is remarkable only for its unremarkableness. Passed over for inclusion into almost every publication from
The Domesday Book
to
Thirty Places Not Worth Visiting in Berkshire
, the hamlet is also a cartographic omission, an honor it shares with the neighboring villages of Hiding and Cognito. Indeed, the status of Obscurity was once thought so tenuous that some of the more philosophically inclined residents considered the possibility that since the village didn’t exist, they might not exist either, and hurriedly placed “existential question of being” on the parish council agenda, where it still resides, after much unresolved discussion, between “church roof fund” and “any other business.”

It was late summer. A period of good weather had followed on from rain, and the countryside was now enjoying a reinvigoration of color and scent. The fields and trees were a vibrant green and the spinneys rich with the sweet bouquet of honeysuckle and dog rose, the hedgerows creamy with cow parsley and alive with cyclamen. In the isolated splendor of Obscurity, the residents enjoyed the season more as they had fewer people to share it with. Few people came this way, and if they did, they were invariably lost.

The Austin Somerset that pulled up outside a pretty brick-and-thatch cottage on the edge of the village was
not
lost. A dapper septuagenarian bounded from the front garden to greet the only occupant, an attractive woman of slender build in her late twenties.

“Were you lost for long?”

“Barely an hour,” she replied, shaking his outstretched hand.

“The gravity of the situation is too serious to remain unremarked forever,” he replied somberly.

She nodded, and the sprightly pensioner invited her into the garden and guided her to a shady spot under an apple tree. She settled herself on the bench and tied up her long, blond, curly tresses. These were her most identifiable feature, one that in the past had made her the subject of a certain amount of teasing. But these days she didn’t much care.

“Call me Goldilocks,” she said with a smile, as she caught Stanley Cripps staring at her remarkably luxuriant hair. “Everyone else does.”

Cripps returned her smile and offered her a glass of lemonade.

“Then you must call me Stanley—I say, you’re not
the
Goldilocks, are you? We have so few celebrities down this way.”

“I’m afraid not,” she replied good-naturedly, having been asked this question many times before. “I think
that
Goldilocks was a lot younger.”

“Of course,” said Stanley, who was still staring at her hair, which seemed to glisten like gold when the dappled light caught it.

“Firstly,” she said, taking a sip of lemonade, “I must remind you that I am an investigative reporter for
The Toad
, and anything you say may well be reported in the newspapers, and you must be aware of that.”

“Yes,” replied Stanley, staring at the ground for a moment, “I fully appreciate what you are saying. But this is serious stuff. Despite continued pleas to the police and evidence of numerous thefts, attempted murder and acts of wanton vandalism, we are just dismissed as lunatics on the fringes of society.”

“I agree it’s wrong,” murmured Goldilocks, “but until recently I never thought that… cucumber growing might be considered a dangerous pastime.”

“Few indeed think so,” replied Cripps soberly, “but cucumbering at the international level is seriously competitive and requires a huge commitment in cash and time. It’s a tough and highly rarefied activity in the horticultural community, and not for the fainthearted. The judges are
merciless.
Two years ago I thought I was in with a chance, but once again my archrival Hardy Fuchsia pipped me to the post with a graceful giant that tipped the scales at forty-six kilos—a full two hundred grams
under
my best offering. But, you know, in top-class cucumbering size isn’t everything. Fuchsia’s specimen won because of its
curve.
A delicately curved parabola of mathematical perfection that brought forth tears of admiration from even the harshest judge.”

“Tell me all about your cucumbers, but from the
very
beginning,” prompted Goldilocks enthusiastically.

“Really?” replied Cripps, whose favorite subject generally brought forth large yawns from even the most polite and committed listener.

“Yes,” replied Goldilocks without hesitation, “in as much detail as you can.”

Cripps spoke for almost two hours and only twice strayed from his favorite topic. He showed Goldilocks his alarmed and climate-controlled greenhouse and pointed out the contenders for this year’s prize.

“They’re remarkable,” said Goldilocks, and so they were. A deep shade of bottle green with a smooth, blemish-free skin and a gentle curve without any kinks. If cucumbers had gods, these would be they. One cucumber in particular was
so
magnificent,
so
flawless,
so
perfect in every detail that Stanley confided to Goldilocks he was finally in with a chance to snatch the crown from the indisputable emperor of cucumber extreme, Mr. Hardy Fuchsia. Unabashed rivals, they would doubtless lock antlers in the field of cucumbering at Vexpo2004, this year to be held in Düsseldorf.

“A shade under fifty kilos,” remarked Cripps, pointing at one specimen.

They spoke for an hour more, and she left just after eight, with a notepad full of observations that confirmed what she already suspected. But of one thing she was certain: Mr. Cripps was almost certainly unaware of the more sinister aspects of his hobby.

By ten-thirty that night, Stanley Cripps was tucked up in bed, musing upon the good fortune that would undoubtedly see his champion cucumber take all the prizes at everything he entered it for. He could almost hear the roar of the crowd, smell the trophy and visualize the cover story in
Cucumber Monthly
that would surely be his. As he sat in bed chuckling to himself with a cup of hot chocolate and a Garibaldi, the silent alarm was triggered and a cucumber-shaped light blinked at him from the control panel near his bed. There had been a couple of false alarms over the past few days, but his longtime experience of thieves told him to
always
be vigilant, as wily cucumber pilferers often set alarms off deliberately so you would ignore them when they struck with real intention. He pulled on his dressing gown, donned his slippers and, after thinking for a moment, dialed Goldilocks’s number on the cordless phone while he padded noiselessly down the stairs to the back door.

Even before he reached the greenhouse, he could see that this was no false alarm—its door had been forced, and the lights were on. Goldilocks’s phone rang and rang at the other end, and he was just about to give up when her answering machine clicked in.

“Hi!” she said in a bright and breezy voice. “This is Henny Hatchett of
The Toad
. If you’ve got a good story…”

Stanley was by now only semilistening. He mumbled a greeting and his name at the beep, then ventured forth into his inner cucumber-cultivating sanctum, stick in hand and apprehensive of heart. He stopped short and looked around with growing incredulity.

An instant later Stanley’s property exploded in a flaming ball of white-hot heat that turned the moonless night into day. The shock wave rolled out at the speed of sound in every direction and carried in front of it the shattered remains of Stanley’s house and gardens, while the fireball arced and flamed up into the night sky. The property next door collapsed like a house of cards, and the old oak had its side facing the blast reduced to a foot of charcoal. Windows were broken up to five miles away, and the blast was heard as a dull rumble in Reading, some forty miles distant. As for Stanley, he and almost everything he possessed were atomized in a fraction of a second. His false teeth were found embedded in a beech tree a quarter of a mile away, and his final comment in this life recorded on Goldilocks’s answering machine. She would hear it with a sense of rising foreboding upon her return—and in just over a week she, too, would be dead.

Most underfunded police division:
For the twentieth year running, the Nursery Crime Division in the Reading Police Department. Formed in 1958 by DCI Jack Horner, who felt the regular force was ill-equipped to deal with the often unique problems thrown up by a nursery-related inquiry. After a particularly bizarre investigation that involved a tinderbox, a soldier and a series of talking cats with varying degrees of ocular deformity, he managed to prove to his confused superiors that he should oversee all inquiries involving “any nursery characters or plots from poems and/or stories.” His legacy of fairness, probity and impartiality remains unaltered to this day, as do the budget, the size of the offices, the wallpaper and the carpets.