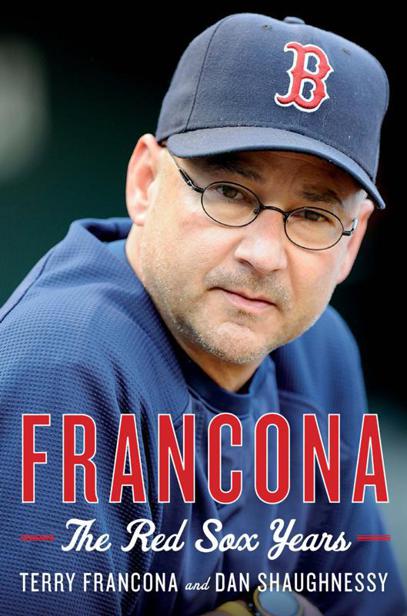 “Can’t you guys do one thing right?”

“I’m Mr. Francona’s son and he wanted me to come over and say hello”

“They’re not going to fire a guy over one mistake”

“This is not acceptable”

“Just crazy enough to think we can do this”

“Somebody went out of their way to hurt me”

A manager at work: Terry Francona's lineup card for a May 31, 2008, game against the Orioles. Manny Ramirez hit his five hundredth career home run in this game. At the time, the Red Sox were defending World Series champions.
National Baseball Hall of Fame, Cooperstown, NY

To my dad, Tito Francona, who managed to always make me feel like he was nearby, even when he was thousands of miles away.

To my dad, the late William J. Shaughnessy, who saved enough S&H Green Stamps to get me my first mitt, a Tito Francona glove, in 1962.

“Can’t you guys do one thing right?”

T
HEY WERE EXHAUSTED
. Empty. Six weeks of spring training had given way to six months of regular season and another three weeks of thrill-to-the-marrow playoff excitement and pressure. It was autumn 2004, and the late, late nights had blended into fuzzy mornings with folks asking, “Did that really just happen?” Those four wins against the Yankees—the comeback trick that nobody’d turned in more than a century of postseason baseball—were played on four consecutive days, an aggregate 18 hours and 12 minutes over 44 intense innings. That’s an average of more than four and a half hours per game. Games 4 and 5 at Fenway were actually won on the same calendar day (October 18) because Game 4 stretched past midnight and Game 5 started fewer than 16 hours later. It was something like a morning-night doubleheader.

The World Series against the St. Louis Cardinals was a blur. It was a little bit anticlimactic, if you can say such a thing about the first World Series title in 86 years for a city starving for a baseball championship. At the end, the Red Sox were an army of steamrollers. The World Series games were not nearly as exciting as those in the epic playoff against the Yankees.

Despite all the bad things that happened to the franchise after Babe Ruth was sold in 1920, there was a sense of inevitability about the Red Sox march to the finish line after they beat the Yankees in the 2004 American League Championship Series. Major League Baseball’s 100th World Series was tension-free, nothing like those Fall Classics of 1946, ’67, ’75, or ’86, all of which ended with the Sox losing a seventh game.

The carpet in the visitors’ clubhouse at Busch Stadium was still champagne-soggy when the tired, triumphant 2004 Red Sox gathered in their own ancient locker room at Fenway for the parade. The ’04 Red Sox were enjoying their first days of folk-hero status in New England. All the stuff that everyone had been saying turned out to be true. These guys would never have to buy another beer in Boston. Kevin Millar was going to be able to live off the moment for the rest of his life. Dave Roberts was going to get asked about that stolen base every day until he was 90 years old. David Ortiz was the Dominican Yaz, Manny Ramirez was World Series MVP, and free spirit Orlando Cabrera would be forever worshiped as the guy who replaced the legendary Nomar Garciaparra. Lanky goofball Derek Lowe was done pitching for the Red Sox, but he was also destined to be a trivia answer as the man who got the win in the clinching game of every round of the playoffs.

Boston mayor Tom Menino and the Red Sox brass plotted the parade meticulously, embracing the concept of a rolling rally, which would maximize fans’ exposure to the Hub’s new heroes. Red Sox players, staff, and their families would ride in “Duckboats” up Boylston Street, then double back down the Charles River. Fans were expected to line the route. Sox CEO Larry Lucchino grew impatient, wanting the day to unfold without a hitch.

But then no one could find the sweatshirts.

And that’s where our story starts.

The sweatshirts had
WORLD CHAMPION RED SOX
stenciled on the front. They were supposed to be worn by all the players, coaches, members of the front office, and the manager. They’d keep everybody warm and bring a measure of uniformity to this motley band of gypsy champions.

The 2004 Red Sox were not a buttoned-down bunch. They were players who passed paper cups around the clubhouse and took a nip of Jack Daniels before cold October night games in New York. Johnny Damon famously labeled his own team “Idiots,” and Sox fans embraced them for their absence of conformity. They had beards, untucked jerseys, and hair . . . down to here, down to there. Damon looked like a lead guitarist from the Woodstock festival. Bronson Arroyo brought cornrows to the mound. Pedro Martinez could barely get his cap over the crop of black roughage on top of his head. Manny Ramirez looked like he was playing baseball wearing pajamas. Theo Epstein, the general manager, was a 30-year-old rock star who wore jeans to the office most days. When the unkempt Sox fell behind the Yankees three games to zero, reporters questioned their professionalism.

The sweatshirts would have helped their band-of-misfits image the day of the parade. At long last the Sox would look like a team.

But the sweatshirts were nowhere to be found as the players and their families got ready to man the Duckboats. Lucchino, the trigger-tempered smartest man in the room, was not happy.

Standing in the doorway of his office, looking out at the clubhouse filled with happy (some hungover) ballplayers, wives, and excited little kids, first-year Sox manager Terry Francona saw Lucchino engaged in an animated discussion with one of his favorite veteran clubhouse operatives. Francona went over to find out what was happening. As manager of this bombastic ball club, he was accustomed to extinguishing fires.

“What’s going on, guys?” he asked Lucchino and the clubbie.

The longtime, underpaid Sox employee explained that the sweatshirts had gone missing. It didn’t seem like a big deal to Francona or anybody else, but Lucchino was fuming. Francona overheard Lucchino muttering, “Can’t you guys do one thing right?”

Goddamn, Larry, we just won the fucking World Series,
Francona thought to himself.
That should be good enough. Who cares what we wear? We could go down the street naked and they’d still clap for us. It doesn’t matter. This is the greatest day of our lives.

If you go back and look at the pictures of that day, you’ll notice that Francona is not wearing a Red Sox ball cap. On the day that Boston’s Olde Towne Team celebrated its first World Series championship in more than eight decades, the manager of the local nine wore the cap of his college baseball team, the University of Arizona.

“It was my silent protest,” said Francona.

Epstein said with a chuckle, “I think we lost those sweatshirts on purpose. They wanted these official, marketing, licensed sweatshirts to be worn. They were going to sell them. They were hideous. They looked like ’80s Zubaz-type sweatshirts. They were this awful, faded blue. No one wanted to wear them, so I think we had the clubbies lose them.”

Francona thought of Lucchino as something of a bully, but he knew the CEO was running on fumes—like everyone else—and was just blowing off steam. Still, the first-year manager wanted to make a point. Being a team wasn’t about wearing the uniform hoodies, cropping your hair in standard fashion, or tucking in your shirttails. It wasn’t about newly embossed sweatshirts that were already on sale in the team souvenir store. The ’04 Sox were a wacky rainbow of diverse personalities. But they were a team. They had their differences, but they also had each other’s backs. Francona knew he could count on guys like Kevin Millar, Gabe Kapler, Ellis Burks, Jason Varitek, and David Ortiz to keep things in line. The ragtag bunch cared about one another. It was the mark of every good team. Baseball is the most selfish of our team sports. It’s a sequence of one-on-one battles. You don’t need teammates to pass you the ball or protect you in the pocket. If you try to help yourself, you’re usually helping the team. But there’s a lot of human interaction and tolerance in a big league clubhouse, and the winners generally handle matters better than the losers. The special ball clubs are the ones that are able to get past the small stuff and push each other to succeed. The ’04 Red Sox were one of those teams. Francona’s managing style tapped into the genius of the Idiots.

He was the proverbial “players’ manager.” He didn’t bark orders, didn’t have a lot of rules, and never
ever
buried his players in public. He took all the bullets. He swallowed hard when he saw things that violated his sense of baseball etiquette or decorum. He always looked at the big picture. If mercurial Manny stopped running out his ground balls or took himself out of the lineup with mysterious hamstring injuries, Francona would leave it up to Manny’s teammates to decide the best course of action.

“I always had my fingers crossed with Manny,” said the manager. “Sometimes, when it really got bad, I’d meet with Damon and ’Tek and David or Doug Mirabelli. All the veterans. I’d say, ‘I see what you guys are seeing. What do you want me to do? I can bench him or suspend him, and Theo will back me up. I want to know what you guys think is the best thing for us.’ And every time they’d come to the same conclusion. I think it was hardest for ’Tek, because he was so respectful of the game. But he did it. They’d always wind up telling me, ‘No, we’ll be a team. We’ll take his numbers.’ So that’s what we wound up doing.”

And Manny wound up being Most Valuable Player of the 2004 World Series. Of course.