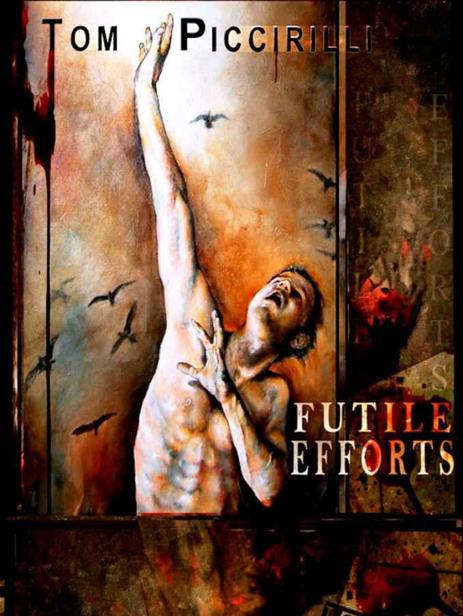 If you're reading this book and did not purchase it, or it was not purchased for your use only, then you should return the vendor of your choice and purchase your own copy.

OTHER CROSSROAD TITLES BY TOM PICCIRILLI:

The Dead Past – A Felicity Grove Mystery

I'm indebted to more folks than I can ever thank, but let me give it a shot anyway.

All my thanks and appreciation go out to:

An Average Insanity, A Common Agony - introduction by Jack Ketchum

Around it Still the Sumac Grows - introduction by Tom
Monteleone

Two in the Eyes - introduction by Brian Keene

Tortures of that Inward - introduction by Simon Clark

From WAITING MY TURN TO GO UNDER THE KNIFE

In Bed With It

Sins of the Sons

On Learning More About the Sicilian

Joe Friday, Myrtle, and the Diabolical Case of My Package

With the Sword of St. Michael Burning Over My Left Shoulder

Faces I Have Not Seen

On Reconciling Your Love, Faith, and Marriage with the Missing

Tips of Two of Your Fingers

My Friend Ernie, Trying to Light a Match

From THIS CAPE IS RED BECAUSE I'VE BEEN BLEEDING

The Toll of Your Personal Evil Troll

This Cape is Red Because I've Been Bleeding

Nunzio
, Sixty Years Dead, Lying at My Side, Staring

A Symbolic Interpretation of the Worst Day of My Life

Why I Can't Stand Behind Some People, and Why You Ought to Be Scared About It

One For the Worm

It Knows So Much More Than Me

From A STUDENT OF HELL

Poised On The Division Bridge

Sunday, While The Sauce Simmers

Divinity As Witness To The Depth Of Our Darkening Love

A Countenance More In Anger Than In Sorrow

Sponging My Syrup Up Off The Formica

When The Delicate Fragrance Grows Too Great

A Dull Blade Slicing Off A Portion Of Prayer

Taking The Bull's Ear Between My Teeth

My Dead Dad Can Beat Up Your Dead Dad

Driving Through the Heart of Kansas, Kansas Driven Through My Heart

Upon Releasing What Needs To Stay Caged

Mist Settling On The Faces Of My Family

L
ong Island is a thin sliver of land stretching out into the Atlantic, home to the fabulous and privileged, the ordinary and the broken. Nestled between New York City's hyper-hub of civilization and the sea's raw wilderness, Long Island is like any other human-settled place. There are strip malls and huge shopping centers, stunning mansions and small, decrepit hovels, busy industrial parks and quiet, lonely bits of wasteland. Highways pulse with the flow of man and machine, while some sidewalks never seem to harbor any sign of life. Big deal.

But through a certain kind of eye, filtered by a soul tuned to the frequencies of anguish and sensitized to every twitch of pain, the Island's shadows deepen. Words exchanged carelessly between acquaintances suddenly lope to the wild cadences of subterranean need. Details lost, half-buried, in the roots and foundations of larger things suddenly quake and tremble. Cracks widen and swallow the unwary. Secrets escape. The fine dust of despair whirls in dust devils at the feet of the desperate.

Long Island in Tom Piccirilli's voice becomes something much greater than its ordinary reality. The rolling landscape of middle class dream and ambition becomes a haunted crossroads between the rational world of the everyday and the torturous realm of the unconscious. The hungers and agonies of youth burn with supernatural intensity, fueled by life-long descents into personal hells as much as by beer and hormone-saturated bodies. There are moments of dislocation in which we are startled by the recognition that expectations of a setting and its inhabitants are not going to be met, that something else is going to happen and it's going to hurt more than we can imagine. A disturbing sense of wrongness creeps like salt-tang fog over sand, through wind-warped trees, and odd things are cast off, or cast ashore.

Then things get really tough.

Anyone who's read any Pic at all knows how large the Island looms in his imagination. What follows is an extreme example of that passion. Desire, love and self-destruction seep from wounds his characters pick at every day of their lives. Then the ocean makes an offering which cuts deep, and the wounds open wider. Appetites roar as they're released from their cages. Blood and rage flow, inevitable but still surprising. We go past the warped and broken hearts, the poisoned connective tissue that has held lives together, and sink down to the bone, to the structure of the pain Pic's vision has exposed. Reality suffers a violent transfiguration.

Tom has come home, and he's showing the rest of us what the place might look like under the right –– or wrong –– light. We may feel like we've fallen off the earth, but where we've landed is as true as it is dark. It is just another place in which humans have settled and made their own.

Welcome to the Long Island of the damned.

–Gerard
Houarner
, author of
THE BEAST THAT WAS MAX
and
ROAD TO HELL