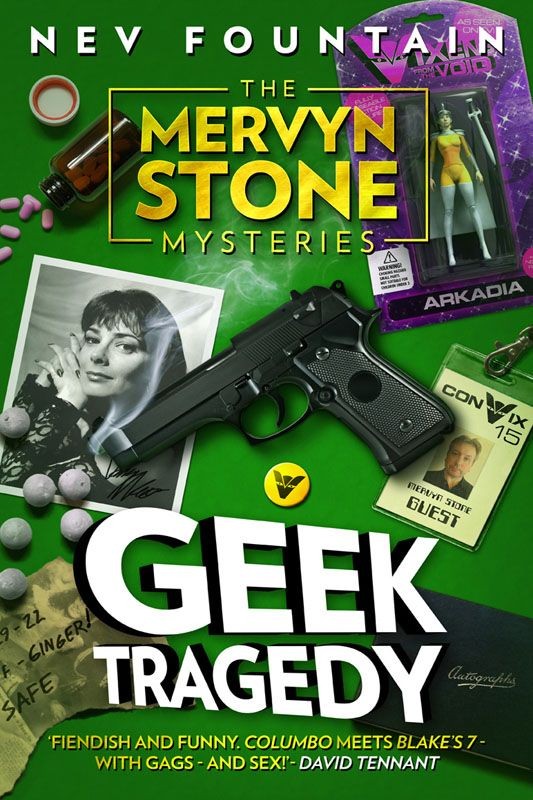 Extract from the Vixens from the Void Programme Guide

With thanks to: Matthew Griffiths and Lisa Miles

The right of Nev Fountain to be identified as the author of this Work has been asserted by him in accordance with the Copyright, Designs and Patents Act 1988. All rights reserved. The moral right of the author has been asserted. All characters in this publication are fictitious and any resemblance to any persons, living or dead, is purely coincidental. No part of this publication may be reproduced or transmitted in any forms by any means, electronic or mechanical, including photocopying, recording or any information retrieval system, without prior permission, in writing, from the publisher. This book is sold subject to the condition that it shall not, by way of trade or otherwise, be lent, resold, hired out, or otherwise circulated without the publisher’s prior consent in any form of binding or cover other than that in which it is published and without a similar condition including this condition being imposed on the subsequent purchaser.

Nicola Bryant. If I had to list all the things she has done and said to help this book, then I’d sound like the Spanish Inquisition sketch. She has been an amazing source of information. She has also been wonderful, and invaluable, and very wise.

Big Finish Towers. Thanks to Jason Haigh-Ellery, for seeing the potential, David Richardson, Nick Briggs, Alex Mallinson, Xanna Eve Chown, Paul Wilson and Toby Robinson, for being so positive and working so hard on this and the ‘Whatever Happened to Babel-J?’ podcast. Terrance Dicks, for writing words that made me interested in reading, Iona Fountain for buying them, and Barbara Corby for encouraging me to write my own. Jonathan Morris and James Goss, for their help, their comments and their unrelenting positivityness. John Banks for his support, his performance, his time and his talent. Dolya Gavanski for her great work on the ‘Babel-J’ podcast. Tom Jamieson, Rob Shearman, Ann Kelly, Peter Ware, Steve Berry, Debbie Hill, Ally Ross, David Tennant, Jill Foster, Dominic Lord and Paul Magrs for their help, advice and suggestions. Andrew Beech and Shaun Lyon for inviting me to science-fiction conventions. Tony Fountain, for almost getting me to a science-fiction convention in 1983. Nice try, Dad. Much appreciated. Paul Cornell for asking me for a short story and starting the whole prose thing. Dan Freedman and Gary Russell, for dragging me into the fold. Simon Brett for his inspiration. To everyone who thinks they’re in this book. Even if they’re wrong.

Jesus Jones wrote a song about it, you know. It wasn’t very good—‘
Vixens from the Void
/ We want to avoid!’ I think it went.

There was a game for the ZX called
Styrax Race
. It should have been called
Styrax
Load for 54 Minutes and Then Race. A bit.
It was an awful game.

Simon Pegg has over 117
VFTV
action figures, most of them in the original blister packs (but he hasn’t got the Babel-J ‘Desire’ respray figure, and I have).

I think when that annoying man off
Springwatch
picked it as his specialist subject on
Celebrity Mastermind
was the moment we realised
Vixens
had finally left the cosy confines of cultdom and become a part of the mass nostalgia bank (ironic now that a show so forward-looking should become yet another plank in the walkway stretching back to all our yesterdays). Certainly that nostalgia bank has served me well—shows like
I Love The 80s, Top 100 Sci-Fi Telly Of All Time, Whatever Happened To The Vixens?
and their like have made me both a popular and wealthy man. Often lorry drivers will lean out of their vehicles and shout, ‘Oi, mate! I also liked that show!’

And when, in 2007, I was asked to pitch a storyline for an audiobook version of the series (for which quite a few of the original cast were able to appear in) nobody was happier than me when that storyline was accepted. The CD of the episode—‘Death In A Starwell’—didn’t sell well, true, which I put down to the original Vizor, Roger Barker, being unavailable for the money asked, and replaced, bafflingly, by Sir Anthony Hopkins, but it is still out there and I have copies myself for sale at my website. But I digress. There’s a whole universe out there. Explore! Enjoy! Exterminate! (Sorry, wrong show.)

Extract from the Vixens from the Void Programme Guide, originally printed in the fanzine Into the Void #26.

DAY OF THE STYRAX (Serial 2M)

MEDULA’S murder of the Groolian ambassador is discovered by MAJOR KARN. He demands she give him The Device (episode 2C: ‘Demons of the Outer Darkness’) but she refuses and flees. KARN pursues her, but he is killed by a Styrax. Convinced the Styrax are the new power in the galaxy, she betrays the location of PANDORUS, the asteroid containing the empire’s planetary defence system (episode 1B: ‘The Pandorus Paradigm’) and unleashes war on the empire, on the very same day that ARKADIA is inaugurated as the Prime Mistress of Vixos.

Yet more production problems beset this, the climax of series two. Once again, Nicholas Everett took over the directing chores. Assigned director Trevor Gosling withdrew because of ‘personal difficulties’—the third time since the series began that a director had what appeared to be a nervous breakdown on set.

Everett’s problems were compounded during filming, when many of the production team were re-assigned to the BBC’s coverage of the 1987 general election. Indeed, in the years after leaving the BBC, Everett has pulled no punches when talking about the suspicious absence of actors and technicians on the last day of filming, which coincided with the day after the election. Everett has often mentioned spurious ‘sicknotes’ from people who he suspected didn’t feel like coming into work after ‘pulling an all-nighter’.

Everett was candid about the problems during a documentary about the making of the TV series also broadcast in 1987, saying that (quote) ‘first the miners, then the dockers, then the nurses, then the teachers, then me. I was last in a very long line of people to get fucked up the arse by Margaret Thatcher.’ The comment was discussed in parliament, and Everett later apologised at the behest of the BBC.

Everett ascribed the comment as the reason he had been given nothing to produce by the BBC since ‘Vixens’ finished. During the ‘ConVix 5’ convention in 1997, Everett joked that clause 28 was brought in as a direct reaction to his comment, saying: ‘the policy was designed to prevent the promotion of gay literature, gay teaching and gay producers.

Once again, script editor Mervyn Stone had to pen a story at short notice. Veteran writer Cedric Lime (creator of children’s TV series ‘Pixie Patrol’) had sent his script in very late, and what he’d written was completely unsuitable.His episode featured a vindictive magic robot regressing the Vixens back until they were the age of children, and hurling them into a surreal dimension containing flying teddy bears and giant talking cushions. Given that the script was so out of character for the style of the series thus far, one might uncharitably assume that Cedric had dusted down an old ‘Pixie Patrol’ script and changed the names of the main characters.

After some months, the production office rang up Lime, and was informed by Lime’s wife that Cedric was ‘too dead’ to complete the necessary rewrites in time.

So once again, Stone stepped into the breach. The result was rushed, sketchy and somewhat illogical, but it was still a compelling episode, charting Medula’s season-long character arc. Her tragic journey began in episode six ‘Quest to Danger’ with the growing resentment of her older sister Arkadia, leading the character further into darkness, culminating in the death of Major Karn and her ultimate betrayal in the final thrilling minutes, plunging the Vixen empire into war. Nothing was ever going to be the same again.

This was to be Vanity Mycroft’s last appearance as Arkadia for the time being. She declined to appear in series three, but re-emerged in series four. The explanation given for her sudden disappearance was that she’d been held on a Styrax prison planet for the past eighteen months.

Interestingly, during Mycroft’s absence, no director of the series underwent any personal difficulties. Though five more did undergo ‘difficulties’ once she’d returned to the show.

The show wrapped on the 12th June amid general optimism about the future, which was well founded. The ratings for series two would be the highest of the show, peaking at 13 million viewers.

The celebration was marred by one sad note. At the wrap party that night, it was announced to the cast that former Styrax operator Sheldon Ellis had died in a house-fire at his home earlier that evening. Even though Sheldon had parted company with ‘Vixens’ some three months before on less-than-amicable terms, he was still good friends with a lot of the cast, so his death came as a great shock.

An investigation concluded that the fire was caused by faulty wiring. The verdict was in no doubt that his death was nothing more than a tragic accident.

Murder. No doubt about it.

Known to Evil by Walter Mosley
A Touch of Betrayal by Catherine Palmer
Mindbridge by Joe Haldeman
Journey by Moonlight by Antal Szerb
The Rebel Pirate by Donna Thorland
Death Among the Sunbathers by E.R. Punshon
The Bible of Clay by Navarro, Julia
Zenak by George S. Pappas
Hold Me by Susan Mallery
Young Truths (Young Series) by Kimble, W.R.