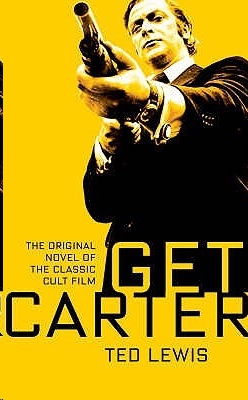 Praise for
Get Carter

“Aristotle, when he defined tragedy, mandated that a tragic hero must fall from a great height, but Aristotle never imagined the kind of roadside motels James M. Cain could conjure up or saw the smokestacks rise in the Northern English industrial hell of Ted Lewis’s
Get Carter
.”

“Lewis was one of the first British writers in the sixties to take Chandler literally—” The crime story tips violence out of its vase on the shelf and pours it back into the street where it belongs“—and [
Get Carter
] is a book that I and plenty of other people at the time considered to be a classic on these grounds.”

“
Get Carter
remains among the great crime novels, a lean, muscular portrait of a man stumbling along the hard edge—toward redemption. Ted Lewis cuts to the bone.”

“Ted Lewis is one of the most influential crime novelists Britain has ever produced, and his shadow falls on all noir fiction, whether on page or screen, created on these isles since his passing. I wouldn’t be the writer I am without Ted Lewis. It’s time the world rediscovered him.”

—Stuart Neville, author of
The Ghosts of Belfast

Jack Carter and the Mafia Pigeon

All the Way Home and All Through the Night 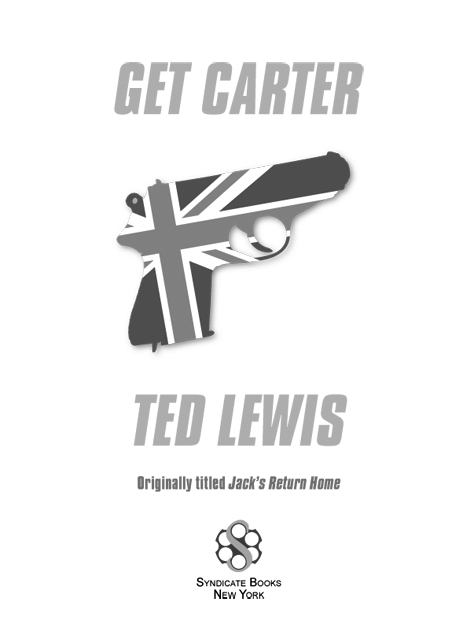 This edition published in 2014 by Syndicate Books
www.syndicatebooks.com

It hadn’t stopped since Euston
.

So began Ted Lewis’s novel
Jack’s Return Home
. That was its title when it first came to my attention in January 1970. It arrived in the post, out of the blue, along with an offer for me to write and direct it as my first cinema film. Its literary style was as enigmatic as the manner of its arrival. Whilst set in England and written by an Englishman, it was (aside from the rain) atypically English. More importantly it ripped off the rose-tinted glasses through which most people saw our mutual homeland. I suspect Ted never shared that Panglossian take on England. But I once did.

Let me slip back to the 1960s. Britain in the ’60s was, for some of us, a hopeful and exciting time when radical ideological dreams seemed realisable. We were fooling ourselves. The fault line of class and privilege fracturing British society—from the monarchy at the top (by divine right, no less) down to the unelected House of Lords (sustained by a skewed system of bestowing knighthoods and other dubious honours) to the nursery slopes of exclusive public schools (
private
schools demanding huge
student fees while enjoying charitable status) and ending up with a gullible and trusting populace—proved impossible to breach. By the time Ted’s book was published those delusional dreams had all but evaporated.

For me those rose-tinted glasses had come off a decade earlier during my National Service: a compulsory two years in the Royal Navy. After ten weeks’ basic training I was posted to a minesweeper, part of the UK’s Fishery Protection Squadron. Our duties took us to every fishing port around the coastline. One of them was Hull, where Lewis was at the same time attending art school. Odd to think our paths may have unknowingly crossed all those years earlier. Going ashore in my seaman’s uniform, bellbottoms and white cap, allowed me entry to places worthy of William Hogarth’s most desperate works. The poverty and depravation I witnessed in those hell holes blew the scales off my bourgeois eyes forever. From now on I would be no stranger to the sleazy milieu Ted’s novel occupied. But there was another reason why I immediately recognised the corruption, fiscal and moral, that lay hidden just below England’s veneer and which Lewis brought so brilliantly to the surface.

After my two years at sea, much of it spent in or close to the Arctic, I returned to civilian life and somehow got a minor job in television. Here, under cozy, warm studio lights, I was able to observe first-hand the other end of the social spectrum; the potbelly as opposed to the underbelly. Television was mostly live in those days and, as a teleprompter operator, I encountered an endless parade of politicians and civil servants, corporate bosses, industrialists and scientists, journalists and actors; indeed anyone who thought themselves worthy enough to be seen and heard. If my first revelatory experience in the Navy brought Hogarth to mind, the second brought with it the satirists Swift and Juvenal. This emerging view of England’s true condition was compounded in the mid-sixties when I was a producer/director on a tough and ground-breaking
investigative television series. If I’d had any doubts about the state of the nation they were dispelled during those two years on
World in Action
. Of course, at the time I was being exposed to these experiences, I had no idea they would become grist for my very first movie. That only dawned on me as I read Ted’s book.

The transition from novel to film, from
Jack’s Return Home
to
Get Carter
, happened very quickly. I still find it hard to believe I began filming a mere five months after receiving the book. As I had never before adapted a novel, it’s not surprising the first draft of the screenplay remained faithful to the original text. In a way it was a gesture of respect for Ted’s talent; but it was the wrong gesture. It was
his
novel; but now it had to be
my
film. Although the novel unfolds in a steel town in middle England, I was desperate to reset it on the coast by the grim and unforgiving North Sea. I wanted to fuse the film’s narrative with those incredible locations I’d seen some fifteen years earlier. Images locked in my memory bank were screaming to get out. By way of appeasing what I felt was my creeping disloyalty I latched onto this passage about ten paragraphs into Ted’s story:

Jack Carter changed trains at Doncaster. It was here that I psychologically decoupled myself from the novel. I decided not to have him change trains for a town with no name, as Ted did; I’d have him change trains for a town
with
a name. Newcastle-upon-Tyne. I had Jack move north into my territory, territory I knew. That way I felt less guilty changing the direction of the novel’s thrust and even its very texture. I was discovering that when the novelist is a good one, adapting their novel to a screenplay can be a curiously painful process.

With the first draft completed I took off for Newcastle and began poking my nose into its every dark and sleazy corner. Despite Ted’s brilliantly terse descriptive powers I needed to relocate scenes he’d written into places I found. The great iron bridges that spanned the Tyne; the race track; the fish jetty; the betting shop; the bingo hall. Ted set the big shootout between Carter, Con McCarty and Peter the Dutchman (the boys sent to bring Carter back to London) on some waste ground outside Albert Swift’s hovel of a house. That worked fine in the novel but I found a more visually exciting location: the passenger ferry that crisscrossed the river Tyne. It does no longer. Also gone is the Trinity Square high-rise car park I used in the film: demolished only a few years ago. Newcastle has been gentrified and is now hailed as a city of culture with sleek art galleries, museums, and concert halls. Ted’s novel captured the decay that
used
to be, as did the film. Back then the more I explored the city the more I began to sense the sickly smell of corruption. It was a smell I recognised from my days as an investigative journalist. Decay and corruption. However far the film parted company with the novel these threads ran firmly in parallel.

On the surface it was a dead town. The kind of place not to be on a Sunday afternoon. But it had its levels. Choose a level, present the right credentials and the town was just as good as anywhere else. Or as bad. And then there was the money
.

My sense of smell proved to be correct. The leader of the city council at the time, one T. Dan Smith, was responsible for a massive programme of slum clearance and regeneration. This was captured in the film. I had got there just in time while the city, like Great Britain itself, was on the cusp between the deprivation of the war years and the tsunami of materialism and greed that was about to sweep over it. A mere two years after
Get Carter
hit the
cinema screens, T. Dan “Mr. Newcastle” Smith (or as his enemies liked to call him, “The Mouth of Tyne”) was spending time in Her Majesty’s prison: six years’ detention for taking massive bribes and other misdemeanours. Another thread the book and film have in common is the total absence of the law or its officers. Both works are as raw and personal as any Elizabethan or Jacobean revenge tragedy. Both are in a direct line to that long British theatrical tradition.

The one thing I regret most about the whole experience was not getting to know Ted Lewis—not properly. The intensity of the preparation and shooting of the film allowed me little time to socialise. We met, of course, but often only briefly and always with others around. Sad that. I know he was happy with the film and trust he forgave me the liberties I took with his book. Writing a Foreword like this is tricky. Those readers who
haven’t
seen the film are in for a treat which I’ve tried not to spoil; those who
have
seen the film will experience something recognisable but also very different. In Steve Chibnall’s definitive book about the film he quotes a somewhat over-exercised commentator: “If Shakespeare could have written a gangster film,
Get Carter
would be the one.” If that’s the case just remember that Ted Lewis wrote it; I only adapted it.