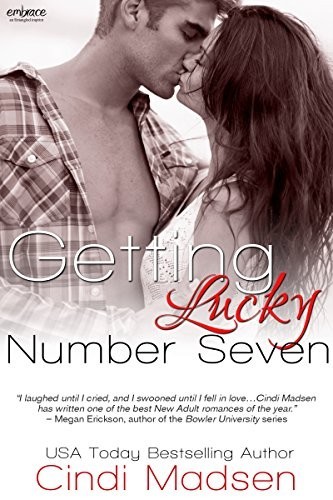 Lyla Wilder is done being the shy, chemistry nerd extraordinaire. While every other college student is out having fun, Lyla is studying. With her cat. Well, she’s played it “safe” quite enough, thank you. So she creates a “College Bucket List”—with item #7 being a night of uninhibited, mind-blowing sex…

But she needs some help from her man-whore best friend.

Hockey player Beck Davenport thought Lyla’s transformation would be subtle. Man, was he wrong. With every item she ticks off, Beck finds himself growing seriously hot for his sweet, brainiac best friend. And if he’s not careful, he’ll end up risking their friendship in order to convince Lyla that he might just be her lucky #7…

Copyright © 2015 by Cindi Madsen. All rights reserved, including the right to reproduce, distribute, or transmit in any form or by any means. For information regarding subsidiary rights, please contact the Publisher.

Embrace is an imprint of Entangled Publishing, LLC.

To Amanda, who encourages me to be brave and is there when I have panic attacks over it. And for just always being there.

Ever notice that drunk people are, like, the worst whisperers ever? The guys were in the kitchen, getting more drinks and discussing my roommate’s nice ass in what I’m sure they thought were hushed tones, while she and her friend, Kristen, were in the hallway behind me, whispering about condoms.

And I was sitting in the middle of the couch, feeling like I totally didn’t belong, as usual.

I wished Einstein wasn’t a scaredy-cat who’d taken off for my bedroom at the knock on the door. At least then I could pull him onto my lap and keep my hands busy petting him, although I was pretty sure focusing on my adorable gray and white puffball wasn’t the kind of thing I should do while on a first date.

When Whitney and Kristen had first burst into the apartment and told me we were going to have a group date tonight, I’d begged off. My research paper comparing generic and brand name drugs wasn’t going to write itself. But then Whitney had made a compelling argument.

“Come on, Lyla, you haven’t even been out, much less on a date, since your boyfriend dumped you two months ago. It’s getting pathetic.”

I’d wanted to say that, one, the breakup was mutual and amicable, and two, I’d been out
lots
of times. Not to parties, or clubs, or bars, or… Okay, so the past several weeks had gotten away from me, but they’d been spent studying, either here, the coffee shop on campus—which was technically out, in my opinion—or the library. Also out. I wasn’t pathetic, I had a full course load, and if I didn’t get stellar grades, I’d lose my scholarship. But yeah, technically speaking, the dating side of my life was non-existent since Miles and I had broken up over Thanksgiving break, and I could see how that might be the tiniest bit pathetic.

“There are three of them, too,” Kristen had added. “It’d be super weird if you weren’t here. Don’t worry, we’ll watch a movie or something, and it’ll be totally chill. Nothing to be afraid of.”

Afraid—I really hated that word, mostly because it so often drove my decisions. Tried and true were highly preferable, but more and more, clinging to the familiar made me feel like I was stuck in a rut. Everyone had moved on and changed, including Miles, and I was still the same.

The three boys who showed up at our apartment were cute, although there didn’t seem to be much going on between the ears or underneath the muscles. Then again, since my brain had frozen up every time I tried to say anything to Colin, the guy I was supposed to be on a date with, I couldn’t really talk. Literally. I use the term “date” loosely, too, since so far there’d only been a lot of drinking with the other two couples cuddling and flirting and me doing the struggling-for-words thing. I had nodding down to a science, though.

Kristin and Whitney erupted in giggles as they stuffed their pockets with condoms they’d retrieved from the bathroom, and then I heard Colin say, “Why’d I get stuck with the fugly, boring one?”

The smile I had plastered on my face turned to glass and cracked. I gripped the cell phone I’d just been checking my assignment to-do list on, the hard case digging into my skin.

“Be nice,” one of the guys whispered at a drunken decibel level of stealthiness. “Maybe she’ll let you get to second base. Who knows what she’s hiding underneath all those clothes? Sometimes the quiet ones are the kinkiest.”

Everything inside of me shriveled up and died, and I stared at the coffee table where my notebook and research articles still were, Colin’s awful words echoing through my brain. It wasn’t the first time I’d been mocked about my clothes or called something less than flattering—“nerd” and “weirdo” had been faux-whispered under breaths as I was passed by in high school halls plenty of times. For some stupid reason, I thought college would be different. Wasn’t this supposed to be where I met mature guys? Where people thought smart was sexy?

I nearly jumped when Colin sat next to me and offered me a cup. “Sure you don’t want one?”

A lump rose in my throat, along with tears. Whitney and Kristen were already draped across their dates, tongue-action seconds from recommencing.

“No thanks.” I looked down at my phone. “Oh, I’m getting a call. Guess I didn’t realize it’s on silent. I really should get it.” I held it up to my ear. “What? You need me to come get you? Where are—”

My ringtone suddenly blared into my ear, and I dropped my phone. It tumbled slowly, catching in the scarf around my neck for a moment before sliding down my long skirt and clattering against the floor. It continued to vibrate against the hard wood, and I scrambled to pick it up. Hardly anyone called me. I lifted it and stared at the display.

“I guess the call dropped, but I didn’t realize, so…” I lamely gestured at the phone. I couldn’t answer and talk to my mom, and I couldn’t stay here. “Anyway, I have to go. Sorry.”

I grabbed my keys and rushed out the door. The icy Boston air slapped me in the face, reminding me I should’ve grabbed my coat, but it was too late for that now. As soon as I made it to the safety of my car, tears broke free. It was bad enough to be called fugly and boring, but I, Lyla Wilder, couldn’t even make a smooth exit. No, I had to go and take awkward to the next level.

Times like these were when I really missed having a boyfriend who was also slightly awkward. Miles had made me feel normal, and when I was with him, it was easier to ignore insults and to keep from thinking about how few friends I had. I understood why it’d been time to break up—long-distance was just too hard, especially when he and I were both slaves to our studies. I thought about calling him now, just to have a friendly shoulder to cry on, but that’d only make missing him—and the way things used to be—worse.

I glanced at my apartment door on the second floor.
Who knows how long they’ll be up there?
Knowing my roommate and her equally boy-crazy friend, it’d be a while.
No way can I go back inside tonight.

Ugh. I
am
pathetic.

More tears blurred my eyes as I fired up my car and cranked the heater to high. There was only one place I could think of going. I knew it was a long shot that he’d even be home on a Saturday night. And if he were, there was even less of a chance he was alone.

That was the downside of having a friend who also happened to be a hot, man-whore hockey player.

Moving On by Bower, Annette
Broken Places by Wendy Perriam
Anything But Love by Abigail Strom
The Boys of Fire and Ash by Meaghan McIsaac
Unraveled - A Short Story Collective by Bankston, KR
To Die in Mexico: Dispatches From Inside the Drug War by John Gibler
The Suicide Shop by TEULE, Jean
The Case Officer by Rustmann, F. W.
Debbie Macomber_Blossom Street 04 by Twenty Wishes
Hidden, Clan of the Werebear by Madison Johns