Ghost of the Chattering Bones 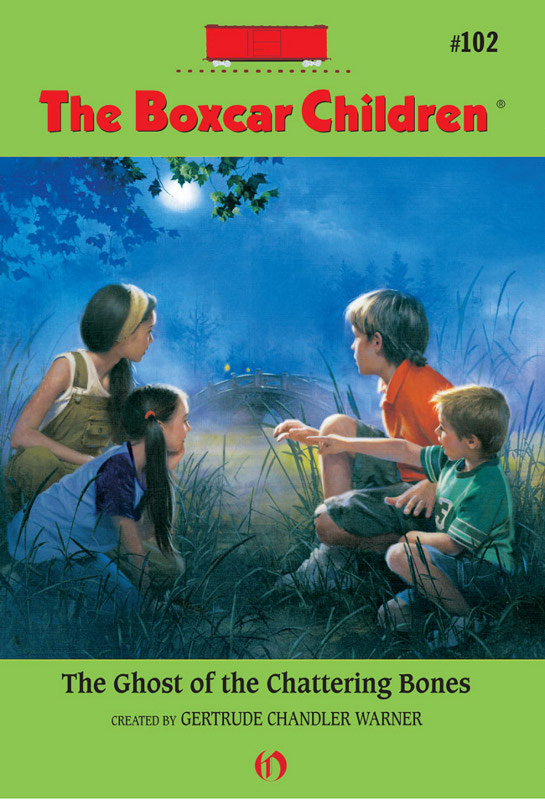 Chapter 8 What’s Wrong with This Picture?

“What kind of mystery is it, Mrs. McGregor?” asked six-year-old Benny. The youngest Alden couldn’t keep still. He was bouncing up and down with excitement in the backseat of the family van.

Mrs. McGregor, who was sitting up front beside Grandfather Alden, looked over her shoulder and smiled. “It’s Norah’s story to tell, Benny,” she said. “Not mine.”

Henry gave his little brother a playful nudge. “Hold your horses, Benny,” he said. “It won’t be long before we’re at Eton Place.” At fourteen, Henry was the oldest of the Aldens.

“I guess I can hold my horses a little bit longer,” said Benny. He didn’t like to wait.

Norah Eton, a good friend of the Aldens’ housekeeper, had invited Mrs. McGregor and the four Alden children to come for a visit in the country. There was an old mystery that needed solving, and Henry, Jessie, Violet, and Benny were eager to hear all about it. There was nothing the Aldens liked better than a mystery. And together they’d managed to solve quite a few.

Twelve-year-old Jessie looked up from the map she was studying. “We make a left at the next road, Grandfather,” she told him. Jessie was the best map reader in the family. She always knew how to get where they were going.

“Oh, now I remember!” Mrs. McGregor nodded. “It’s been so long since I’ve been out this way, my memory’s a bit foggy.”

“How long has it been, Mrs. McGregor?” Grandfather Alden asked, as they turned off the highway onto a gravel road full of twists and turns.

“Let me see, now … Norah’s great-niece, Pam, was just a toddler the last time I saw her,” said Mrs. McGregor. She thought for a moment “Now she would be about Violet’s age.”

At the mention of her name, ten-year-old Violet turned away from the window. “Will Pam be staying with her great-aunt Norah all summer?” she wanted to know.

“Oh, I imagine so,” Mrs. McGregor answered. “She usually does. You see, her parents own an antique store in the city. They spend their summers traveling all over the country hunting for treasures.”

“Interesting old things to sell in their store,” explained Mrs. McGregor. “They stop at every flea market and swap meet they can find.”

That sounded like fun to Benny. “Why doesn’t Pam go along?”

“Travel can be tiring,” put in Grandfather, who often went away on business.

“I imagine Pam would much rather spend her summers with her great-aunt Norah.”

Mrs. McGregor went on, “When Norah and I were young, we loved exploring Eton Place—all the fields and the streams and the woods. The property’s been in the Eton family for a long time. As a matter of fact,” she added, “Norah’s putting together a history of the Eton family. She even hired a college student to help with the research.”

“That must be interesting,” said Jessie. “I’d like to put together a history of the Alden family sometime.”

Benny tapped on his sister’s shoulder to get her attention. “Don’t forget to mention Watch, Jessie,” he reminded her. Watch was the family dog.

“How about our boxcar?” asked Benny.

“I’d never forget our boxcar, either,” Jessie told her little brother. “Our old home is an important part of our family history.”

After their parents died, Jessie, Henry, Benny, and Violet had run away. They found an old boxcar in the woods and stayed there for a while. Then James Alden found his grandchildren and brought them to live with him in his big white house in Greenfield. He even gave the boxcar a special place in the backyard. The children often used their former home as a clubhouse.

“I’m glad I brought my camera along,” said Violet. “We can take pictures of our trip to go in our family history.”

James Alden smiled into the rear view mirror. “Photos are a great way to keep a record of the times.”

“I wonder what they did in the olden days,” Jessie said thoughtfully, “before cameras were invented.”

“They didn’t have cameras back then?” Benny sounded surprised.

Violet shook her head. “Not until the 1820s.” Violet knew a lot about photography. It was one of her hobbies.

“Thanks, Henry.” Violet beamed. “But I still have a lot to learn.”

Grandfather spotted a small gas station. He pulled up close to the gas pumps. A woman with gray streaks in her dark hair came over to the car.

“Fill ’er up?” the woman asked with a friendly smile. She was wearing blue overalls with the name DARLENE embroidered across the front.

Grandfather nodded. “You read my mind.”

While Darlene filled the tank, the children hopped out of the car. They set to work washing the windows and the headlights.

“You folks on vacation?” Darlene asked them.

Jessie nodded. “We’re spending a week in the country.”

As Darlene replaced the cap on the gas tank, she lowered her voice. “A word of advice,” she said. “Don’t go fishing from the old stone bridge. Some say it’s haunted.” Her eyes twinkled but her voice was serious.

The children were so surprised by Darlene’s word that they were speechless. Before they had a chance to ask any questions, Grandfather had paid the bill and they were on their way again.

“Eton Place sounds a little … spooky,” Benny said as they drove along.

“You don’t believe there’s really a ghost, do you?” Henry asked in his sensible way.

“I imagine she was talking about the ghost of the Chattering Bones,” put in Mrs. McGregor.

The children all looked at their housekeeper in surprise. “The ghost of the what?” said Benny, his eyes round. “Did you say—”

“Oh, look!” Mrs. McGregor broke in, as the car rounded a curve. “There’s the mailbox!”

Benny craned his neck. “Where?” he asked. He had been thinking about chattering bones. They were a scary thought.

Mrs. McGregor pointed to the side of the road. Sure enough, up ahead was a mailbox set atop a post. The shiny gold lettering on the side of the mailbox read: ETON PLACE.

Grandfather turned the station wagon into a long driveway that wound through the trees. They slowed to a stop when they came to a big plum-colored house with a large porch. On one side was an orchard. On the other, a flower garden.

“Oh, a purple house!” Violet cried with delight as she scooted sideways out of the wide backseat. Purple was Violet’s favorite color. She almost always wore something purple or violet.

“Yes, the house has always been plum-colored,” said Mrs. McGregor as Henry opened the car door for her. “Thanks to Meg Plum.”

As Grandfather lifted the suitcases out of the car, Jessie noticed a tall, silver-haired woman in a flowery-blue sundress standing near the orchard. She was talking to a man in a business suit. As if feeling Jessie’s eyes on her, the woman suddenly looked over.

“Margaret!” The tall woman rushed towards Mrs. McGregor. “How wonderful to see you!”

“And this fine-looking group must be the Alden family!” Norah Eton said.

Mrs. McGregor proudly introduced everyone. “Welcome to Eton Place!” Norah said, a smile spreading across her face. “I can’t wait for you to meet my niece. I know she’ll enjoy your company.”

“We’re looking forward to meeting Pam,” said Jessie, speaking for them all.

“Guess what, Mrs. Eton?” Benny put in. He was still thinking about the mystery.

“We’re pretty good at tracking down clues,” he told her proudly.

“So I’ve heard,” said Norah. “I’ll tell you all about the old mystery after dinner, Benny. But you have to promise me one thing.”

“You must call me Norah.”

Just then, a voice boomed out. “I’m Spence Morton.” The man in the business suit walked toward the group and put out his hand for Grandfather to shake. “I hope you’re not here about the bridge, too,” he said. “I made a fair offer, but I’ll go higher if necessary.”

Henry, Jessie, Violet, and Benny looked at each other in bewilderment. Was this the same bridge Darlene had mentioned?

Spence Morton went on, “I was passing through town and happened to pick up a local paper.” He pulled a newspaper out from under his arm and thumped a finger under a picture of an old stone bridge. “This is exactly what I’ve been looking for!” he told them, his eyes glittering behind gold-rimmed glasses. “My wife takes great pride in her English garden,” he added, “and this charming bridge will be perfect for the stream that runs through it.”

“That bridge is not for sale,” Norah stated icily. “As I said before, you’re wasting your time.”

The man did not look pleased to hear this. “Everything has a price tag,” he insisted.

“We’ll see about that.” Norah’s mouth was set in a thin, hard line.

“Mark my words,” said Spence Morton, “I’ll do whatever it takes to get what I want.” With that, he turned and walked away.

Norah sighed. “Every time I turn around lately, there’s Spence Morton. Yesterday I found him measuring my bridge! Can you believe it?”

“He isn’t a bad person, but …” Norah stopped and let out a long sigh.

“But,” finished Grandfather, “he just won’t take no for an answer.”

Norah nodded slowly. “I wish now I’d never let the newspaper do that write-up on my bridge.” Then, changing the subject, she added, “Will you join us for a late dinner, James? There’s plenty to go around.”

“Thanks, Norah,” he said, “but the sun’s already going down, and I still have some business to take care of.”

Grandfather gave a cheery honk as he drove away. Everyone waved, then headed toward the plum-colored house.

Mrs. McGregor looked around as they stepped inside. She smiled at Norah. “I see you’ve made some changes,” she said.

“Yes, I finally got around to fixing the house up a bit,” said Norah. As she led the way to the stairs, she shook her head. “But what a mess! Walls torn down … floorboards pulled up. This place was a real disaster area for a while.”

Upstairs, a room with plum-patterned wallpaper was waiting for Mrs. McGregor, another with fan-shaped windows for Violet and Jessie. A third bedroom with twin beds and fringed blue bedspreads was just right for Henry and Benny.

“We’ve been keeping dinner warm for you,” Norah told them. “Anybody hungry?”

Benny waved his hand in the air. “I am! I am!” he cried, to no one’s surprise. The youngest Alden was always hungry.

Norah laughed. “Well, come on down as soon as you’ve settled in.”

It didn’t take the Aldens long to unpack. They were waiting for Violet to finish brushing her hair when Benny cried, “Look!” He was peering through one of the fan-shaped windows.

Jessie could tell by her little brother’s face that something had startled him. “What’s going on, Benny?” she asked, stepping up beside him.

“Look down there!” Benny said, his eyes wide.

“What is it?” Henry hurried over, with Violet close behind.

The Aldens huddled around, straining to see out into the gathering darkness. Sure enough, the shadowy outline of a curved stone bridge could be seen in a far corner of the backyard.

“There must be a creek behind the house,” noted Henry.

Violet said, “I can’t be sure, but I think that’s the bridge that was in the newspaper.” 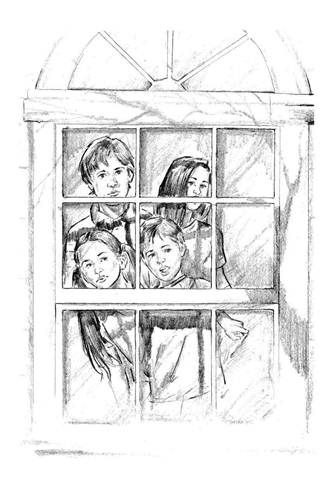