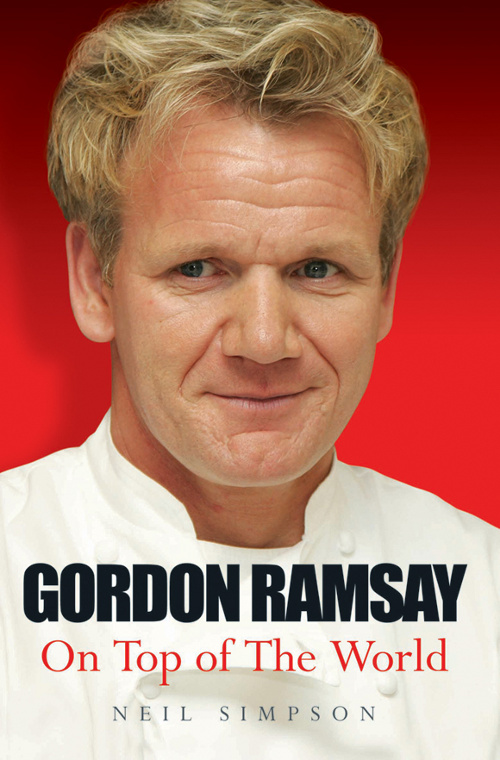 Neil Simpson has been an award-winning journalist for nearly 15 years working for the
Daily Mirror, Sunday Telegraph
and
Mail on Sunday
. His books include biographies of Jonathan Ross, Billie Piper, Jade Goody and Lorraine Kelly, plus the best-selling
Paul O’Grady – The Biography
. 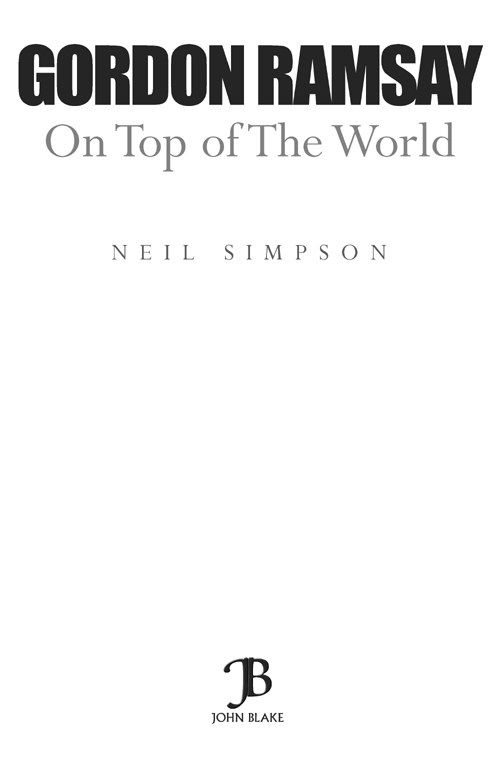 T
he swimming pool was as gloriously blue as the sky. Palm trees fluttered just slightly in the Los Angeles breeze. Gordon Ramsay was floating across the crystal clear waters on a vast blue-and-white inflatable chair, holding a cocktail glass and smiling broadly for the camera. It was the tongue-in-cheek highlight of an exclusive photo shoot for the
Times
newspaper back in rainy old London. But this was pure California, and Gordon was in his element.

âRamsay and America were always going to get along. There's nothing the US respects more than a self-made man and few have taken control of their own destiny as emphatically as Gordon Ramsay,' said
Times
reporter Chris Ayres who interviewed Gordon in the afternoon sun in August 2008. He saw a man more tanned, more toned and just a little bit blonder than normal. But he
saw a man just as driven, ambitious and determined as ever â not least because Chris reckoned Gordon had arrived in the US âwith all the subtlety of a 40-megaton nuclear weapon'.

When Chris met him, Gordon was scandalising American television viewers with his language, his anger and his honesty on the US versions of
Hell's Kitchen
and, ultimately,
Ramsay's Kitchen Nightmares
. He was being photographed with David and Victoria Beckham and other A-list celebrities at the beach, at dinner and at football games. But, most importantly of all, in the summer of 2008, Gordon was working full-time to make a success out of his latest multi-million-dollar LA restaurant.

Gordon Ramsay at The London Hotel in West Hollywood had opened three months earlier. It was the latest part of Gordon's vast global push of book launches, merchandising deals and television programmes. The huge workload meant Gordon's name was known in almost every part of the world. By the time he climbed into that LA pool and smiled for the photographer there were almost as many Ramsay restaurants than there were hours in the day. He had more Michelin stars than there are days in the week. You could read his cook books in 14 languages including Finnish and Lithuanian. You could hear him swear on TV screens in both hemispheres.

But in the summer of 2008, when Gordon Ramsay at The London finally opened, the focus was very firmly on the food. It needed to be, because the restaurant hadn't been given a very warm welcome. One top critic had called the LA menu âhalf-hearted'. Another, Jonathan Gold, the first food writer to win a Pulitzer Prize, said the restaurant's
design was âa kind of steam-punk take on a seventies disco lounge' and said his cod had been âover-cooked'.

Perhaps Gordon should have been ready for the criticism. For his introduction to LA had always been full of surprises. He loves telling the story of the night he ordered room service at the iconic Chateau Marmont hotel on Sunset Boulevard. It was when he first came to LA to scout out restaurant locations, long before he became famous on US television. âOh my God! What happened to your face?' screeched the room service waitress the moment she clapped eyes on him. Gordon jokes that she almost dropped the food tray in shock. âWhat do you mean?' he had asked her. It turned out that she had never seen someone in LA with such deep wrinkles on their brow. In her mind, the only possible explanation was that Gordon had just been thrown face-first through a car windscreen.

Back then, Gordon had enjoyed laughing off the comment. One year later, when his still-wrinkled face was famous and his restaurant was open, he was ready to tough out the food critics as well. He knew his food was far from âhalf-hearted' or âover cooked'. He certainly hadn't dumbed-down his menu for the famously shallow residents of La-la-land. Over in the stunningly beautiful West Hollywood dining room his customers could start with âslow braised octopus fingerlings, potato foam and olive toast', they could have âpoached rabbit loin, confit beet salad, anchovies and caper vinaigrette' alongside a âbroiled black cod, pig's tails with Kumanoto oysters and celeriac puree'. If they had room for dessert they could try âchilled coconut tapioca with passion fruit, candied ginger
and milk chocolate, star anise sorbet'. It was bold stuff. And, whatever the critics said, it did the trick. Shortly after opening, the new restaurant was taking 600 calls a day from people desperate for reservations. It was serving nearly 150 guests a night. Forget everyone who wanted Gordon to fail. He had finally cracked America. Just as he had cracked pretty much everywhere else.

His American dream had begun nearly two years earlier in New York. Opening Gordon Ramsay at The London Hotel in that city had been tough â emotionally, physically and professionally. It had taken a delayed opening, many bad reviews and one replaced head chef to get things right. But when all this had been done, Gordon felt he had succeeded. He got proof within the year when he was awarded not one but two Michelin stars. So did he rest on his laurels and take a well-earned break? Does that sound like Gordon Ramsay? No. Having taken Manhattan, squeezed in a new restaurant in Prague and finished the plans for another in Heathrow's new Terminal Five, he was ready to take on Paris.

Gordon hit that most snooty and food-obsessed of cities in typically fiery style. âHe's a rat, evolving in a festering pot of manure. I jump on his head and kill him,' is what reporter John Arlidge remembers Gordon screaming out in the week the chef opened Le Trianon in France. For good measure, Gordon was apparently stamping his feet repeatedly âas if killing vermin' when he shouted out the words. The target of all this anger was a celebrated French food critic who had given the new restaurant
nul points
even before it had opened. Francois Simon had instead done a mini-tour of Gordon's London restaurants. He
hadn't been particularly impressed. Going to a Ramsay restaurant, he said, was âlike going to the dentist and finding that the dentist's secretary is pulling out your teeth.'

Gordon was furious. âI've been caned and I haven't even opened yet. You can kick me in the nuts when I'm open. But before? How is that possible?' he asked when he first heard that Simon had given him a bad review. But as the words sunk in, he accepted that he could hardly have expected anything less from the French establishment. Taking haute cuisine to France was never going to be easy. Especially when your new restaurant is in Versailles, the most glittering real estate prize in Paris.

So what did Gordon do to beat back against those critics? He did what he always did when the heat was on. He got back in the kitchen. He cooked up a storm. He checked up on every last detail of the menu, the service and the complete dining experience in that most stunning of Parisian settings. âThere's not a day or a minute that goes by that I'm not thinking about it,' he said of the Trianon's opening. âOf course I'm nervous but then I shit myself with every fucking opening. I'm not so cocky to take it for granted that it will be a success.' And that was even more true in Paris. âAsk any chef and this is where they really want to succeed,' he said of the city. âThis is serious, this is significant so the heat is on. This is the one I'll be judged on. Paris is personal. This is the cradle of haute cuisine. I want three Michelin stars here.'

He certainly didn't take any easy options there, just as he wouldn't do in LA. One thing Gordon has never done is compromise. So forget crowd-pleasing French food. Instead he imported Scottish lobster and langoustines,
Aberdeen Angus beef and British hand-dived scallops. âWhen I learned to cook in France chefs used to buy British produce and take the labels off. Well, we're going to stand British and proud. When they ask me why I'm not using the scallops from Brittany I will say, “Because I know I can get better.”'

Gordon also vowed to teach French diners a thing or two about what they could eat â not least the carpaccio of octopus he served with some fish dishes. âThe French are so arrogant, they're not interested in that kind of Japanese accenting. They say, “Fuck off! We don't want anything raw.” Just wait till they try it. It's the same with golden caviar from the albino sturgeon. They all cringe about it, but you'll see.'

Everyone around Gordon knew he was taking a huge gamble in Paris. The economics of running a successful restaurant there were brutally tough. Failure was a very real option. And the pre-opening criticism of Francois Simon was followed up by some more attacks when the first paying customers arrived. One critic suggested that Gordon might bring mad cow disease to France with his imported ingredients. Another said the restaurant served: âkaraoke cuisine or, in the language of Gordon Ramsay, bullshit'. But the sheer force of Gordon's personality won over the public, if not the so-called experts. The snooty French critics might say they didn't like eating his food. But soon they would have to eat their words. Shortly after opening, Le Trianon was solidly booked for four weeks in advance. At one point the restaurant had to stop taking advance bookings altogether to try and clear the backlog of demand. Then Gordon got the most important recommendation of all â from chef Guy
Savoy, one of Gordon's all-time culinary heroes. Savoy had come for dinner just after Le Trianon had opened. He loved everything about it â especially the âEnglish with a twist' dish of Granny Smith parfait with bitter chocolate and champagne foam. âThe food is magnifique. Simon is rude about everyone and he is wrong about Monsieur Ramsay,' Savoy said of the critic who had been unimpressed with Gordon's restaurants even before the latest one was open. Flying back to check up on his other restaurants in London, Gordon was finally able to relax about a job well done. But there were still a few clouds on the horizon.

For years, Gordon has prided himself on instilling extreme loyalty in his staff. He runs a tight ship, holds his colleagues close to his chest and supports them in everything that they do. Reporter Fiona Sims, who profiled the chef for
Caterer
magazine in the midst of his recent global expansion, said this was one of the first things she noticed about their long conversations. âRamsay dishes out the credits constantly,' she noted. When she pointed this out to him he said shared credit was vital to his success. âWe support each other through the whole company, from the kitchens to front of house to the office. That's the secret to all this â achieving that level of consistency through nurturing talent. Each and every one of my chefs, from Mark Sargeant to Marcus Wareing, Mark Askew to Jason Atherton â they're all responsible for producing talent. When I look at the talent that's coming through now, Claire Smyth, Gemma Tuley, Angela Hartnett, I think “wow”. But you should see what's coming through behind them.'

What he didn't see coming was the fact that one of his
inner circle was about to rebel. In 2008 he had a spectacular (and very public) falling out with Marcus Wareing, his long-standing protÃ©gÃ©, business partner and friend.