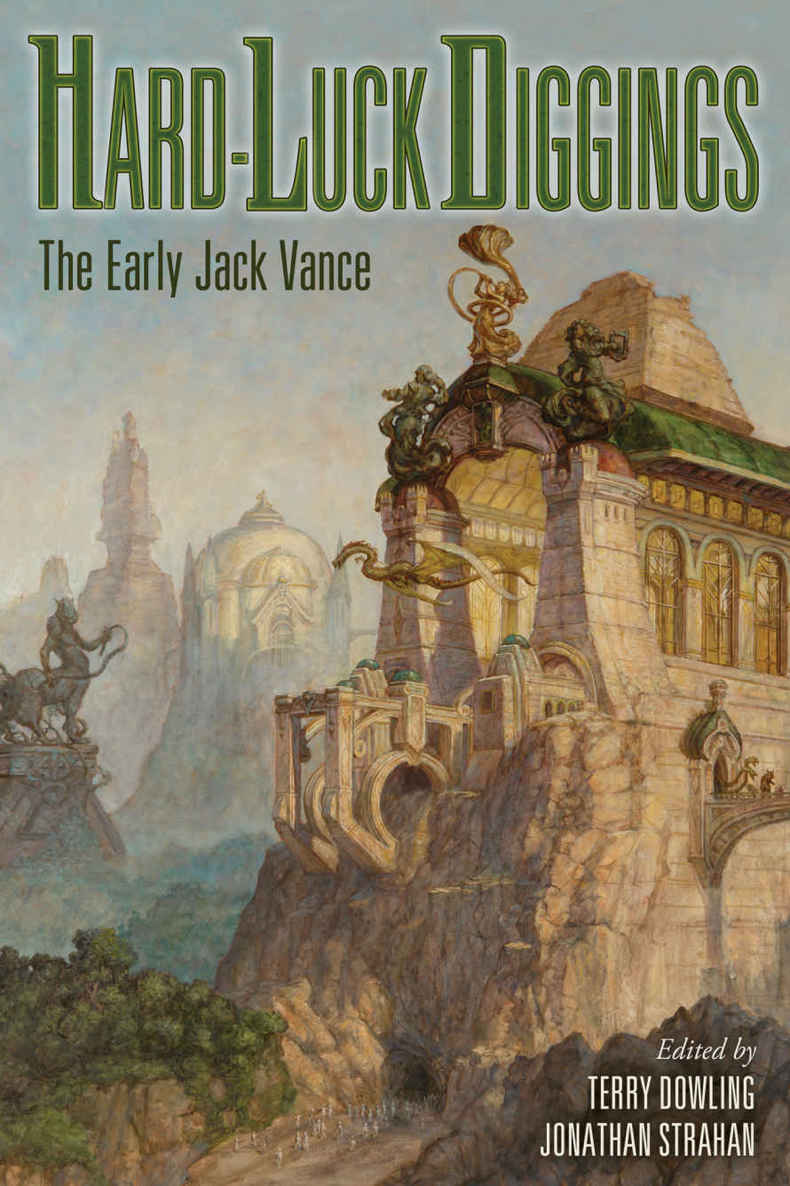 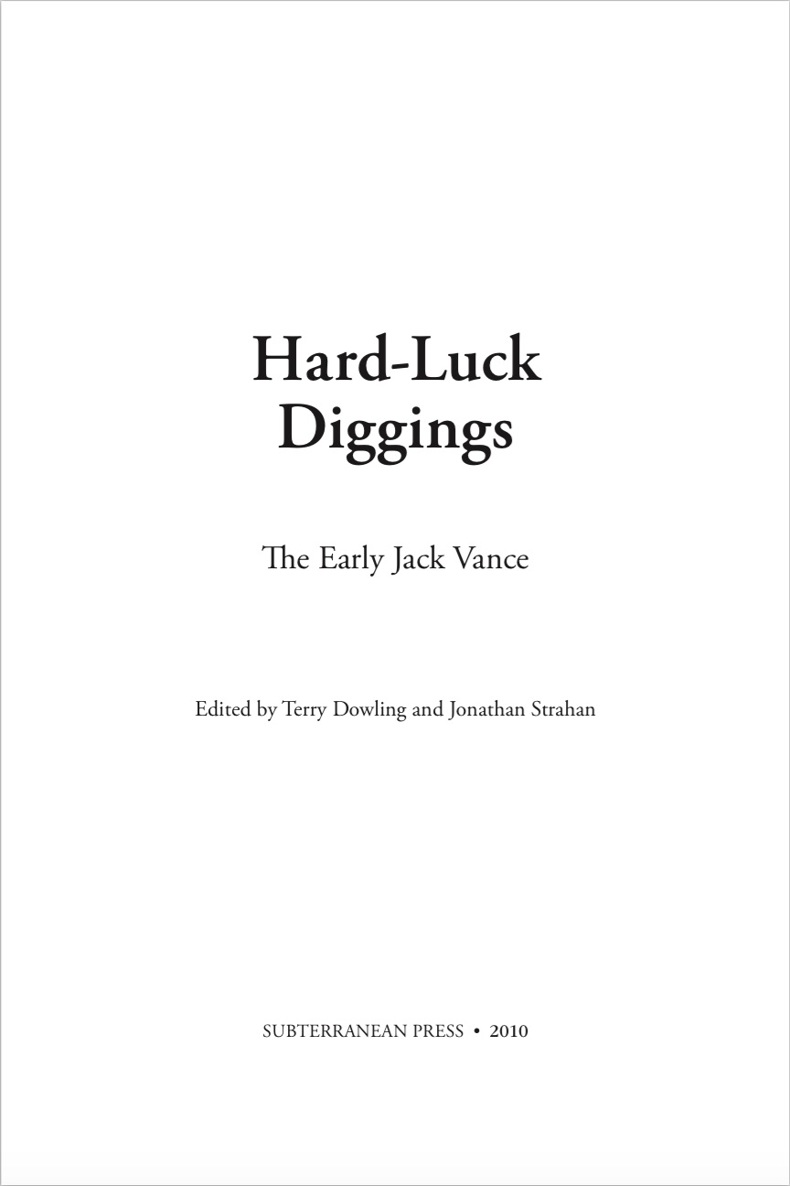 Quoted material from Jack Vance comes from
This Is Me, Jack Vance!
, Subterranean Press, 2009, the Introduction to
The Dark Side of the Moon
, Underwood Miller, 1992, and from conversations between Jack Vance and Terry Dowling, December 1995.

In the opening pages of his 2009 autobiography,
This Is Me, Jack Vance!
, the author reminds us that “Like any craft, writing is mastered by practice and patience, and if one has any ‘knack’ for it at all, that very knack—paradoxically—can explicate everything under the sun but itself.”

That said, when you assemble a collection of stories from the first dozen years of any writer’s career, you cannot help but find the author learning his or her craft, refining process, improving techniques for delivering narrative, creating characters, mastering dialog and motivation, invariably locking in favorite themes and preoccupations as well; in short, revealing the basic shape, form and direction of what that career will most likely become.

As well as delivering fine vintage entertainment from one of the true Grand Masters of science fiction and fantasy, that’s the other thing you’ll find in this collection. In a real sense, these stories show Vance working to become a “million-word-a-year-man” so he could pay the mortgage, buy the groceries, travel the world, eventually build his own private “dream castle” and start a family with his wife Norma.

In doing this, like any writer serious about staying in the game, he targeted the available venues of the day, doing what was required to cater to the tastes of the various editors and their readerships, while at the same time bringing his own special way of doing things to the table so that his name, in modern marketing parlance, stood a chance of becoming a viable “brand.”

Fans of Vance’s work know only too well how he succeeded at this task, and how, for reasons both practical and artistic, he quickly made the novel, often novels in series, his preferred form. The shorter, always interesting but far less lucrative work received less and less attention and was soon set aside altogether.

But as so many writers have said, it is in the shorter and mid-length work that the craft is best learned: the practicalities of economy, pacing and narrative style, the versatility and adaptability, how to manage the hook, the tease, everything from mastering point of view to self-editing for greatest effect. When reading (or re-reading) the stories featured here, all of these things are on show.

To take it further, the following selection illustrates the useful writing workshop corollary that you write short stories for the reputation and longer work to pay the mortgage. Novels take skill, ideas and time. Short stories take skill, ideas and
much less time
. You can afford to try different things, take risks, make mistakes, get feedback sooner. These stories, with their range and variety, show how Vance’s shorter tales were first the mainstay then, with the “brand” sufficiently in place, became the other thing he did because there were often quick dollars to be made, invitations from editors, ideas that didn’t require amplification beyond a certain point. Inevitably, those smaller notions and nifty ideas were incorporated into the plots of the longer work, and the shorter form became first a rarity, then a thing of the past.

This becomes even more evident when we put the stories in
Hard-Luck Diggings
in context and remember the other storytelling projects Vance was engaged in around the time of their writing, so that the nature of the output and the sheer “coal-face” experimentation going on can be seen as part of a definite rising curve of commitment, skill and confidence.

Our title story, for instance, was produced several years after Jack had already completed the suite of stories that would be published by Hillman in 1950 as
The Dying Earth
, and do so much to establish the Vance “brand.” With its action adventure approach and spare delivery, “Hard-Luck Diggings” sits in striking contrast to those wry, lyrical, bittersweet pieces.

“Abercrombie Station”, with its feisty female lead off to make her fortune among the Solar System’s elite, appeared the same year that
Thrilling Wonder Stories
published “Big Planet”, detailing the adventures of a handful of stranded space-travellers trekking across that enormous world. So, too, “Where Hesperus Falls” delivered its minor riff on the less salutary aspects of immortality in 1956, the same year that the rich and memorable immortality novel,
To Live Forever
, saw print. “Dodkin’s Job” was published the year following “The Miracle Workers” and
The Languages of Pao
, and so on.

With this in mind, let’s return now to the first twelve years of Vance’s writing career to when the adventure was just beginning, to when the shorter works weren’t the rarity, and any success at all was very likely counted success enough.

“Hard-Luck Diggings” originally appeared in
Startling Stories
for July 1948 when the author was in his early thirties, and is a no-nonsense who (or what) done it that was the initial outing for the author’s earliest interstellar sleuth, Magnus Ridolph, complete with a wholly appropriate tip of the hat to Arthur Conan Doyle’s Sherlock Holmes in its opening lines. Written soon after his time in the merchant marine, it was Jack’s fifth story sale, an exotic puzzle story that, in the best pulp traditions of
Weird Tales
and
Blue Book
, might as easily have been set in the Amazon or darkest Africa as outer space. Ridolph’s arrival at the site of his first investigation might be in humanity’s interstellar future, but this is very much the space age with slide-rules, where a spaceship smells of “hot oil, men, carbolic acid, paint”, giving us a taste of life aboard the more conventional freighters of the author’s recent first-hand experience.

“The Temple of Han” was first published in
Planet Stories
for July 1951. It features another of Vance’s competent, resourceful heroes in a rather dazzling trans-galactic adventure originally titled “The God and the Temple Robber”, and was written in 1946 when Jack was 30 as part of an early, subsequently discarded novel. As well as being a quick-sketch tale tailored to the demands of the magazine market, the pacing, narrative economy and author confidence here are quite impressive, techniques well in advance of the rather conventional adventure storyline to which they are applied.

“The Masquerade on Dicantropus” originally appeared in
Startling Stories
for September 1951 and is a modest xenological mystery with a simple setting-up and, for modern readers, a simple enough resolution. Once again it’s Vance writing according to perceived structures and expectations, though, again, we see that his economy of delivery, his sure-handedness with quick-sketch characters and dialog were there from the first, however slight, even perfunctory, the tale being told. “Masquerade” is of additional interest because of how the story’s final reveal was used eleven years later in the author’s Hugo-winning short novel
The Dragon Masters
.

While many of the earlier Vance stories show the lean, “steam and rivets” quality suited to the markets of the day, we can see how quickly the author hits his stride by comparing, say, “Hard-Luck Diggings” with “Abercrombie Station” when it appeared four years later in
Thrilling Wonder Stories
for February 1952. Given the additional length, and the fact that the story (and/or the author, to make that crucial distinction) was judged a sufficient draw-card to warrant the extra space, “Abercrombie Station” is a different order of achievement entirely, filled with assured characterization, an easy wit and an authorial voice comfortable with the added room to move. A second Jean Parlier adventure, “Cholwell’s Chickens”, appeared later the same year.

The Manor of Death by Bernard Knight
Box 21 by Anders Röslund, Börge Hellström
Animals by Emma Jane Unsworth
A Brother's Debt by Karl Jones
The Book of Woe: The DSM and the Unmaking of Psychiatry by Gary Greenberg
The Power of Un by Nancy Etchemendy
The Horrific Sufferings Of The Mind-Reading Monster Hercules Barefoot: His Wonderful Love and his Terrible Hatred by Carl-Johan Vallgren
Masks by Evangeline Anderson
The First Cut by Dianne Emley
Aberrant by Ruth Silver