Hart of the Matter (A Love of the Game Novella) 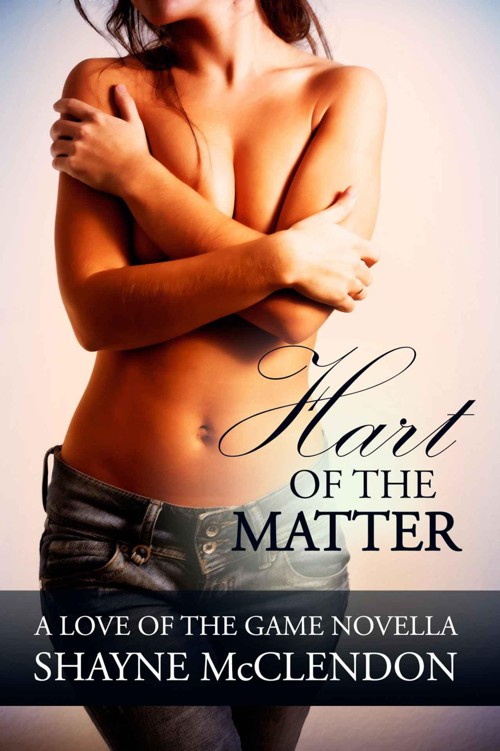 Hart of the Matter

A “Love of the Game” Novella

Hart of the Matter by Shayne McClendon

This is a work of fiction.  Names, characters, places, and incidents either are the product of the author’s imagination or are used fictitiously, and any resemblance to actual persons, living or dead, business establishments, events, or locales is entirely coincidental.

Just a Little – The Complete Collection

If you enjoy “Hart of the Matter” – you’ll love the rest of the stories in the series!

This box set includes five stand-alone novellas about hot professional athletes and the women who love them.

How you play is just the beginning…

Time to Make the Doughnuts
–
Josie and Max (football).

Get “
Love of the Game – The Complete Collection
” right now!

First, allow me to thank
Bridgette Aielo Smith
for the title I ultimately chose for Bailey and Hart’s story.  I’d written so many words in the span of a couple of days and my mind went
blank
.

She told me she thought of the song “Heart of the Matter” by Don Henley and when you read it, I think you’ll agree that it was the right theme song for this particular tale.

I appreciate all the amazing ideas and suggestions from my readers (who are the best a writer could possibly ask for) – and love that you guys hung out with me until two in the morning while I figured it out.  Squirrel!  You saved my butt and I’m grateful!

If this is your first time reading a story of mine, I hope you like it and will check out some of my other work.  If you’re a “rabid fan” – thank you again.

Words are useless without someone to read them.

Bailey Verreos
knew
she was a fool.  That’s what really chapped her ass.

At eighteen, she was far different from her best friend Harley.  Bailey might be the girly one on the outside but she was hard as nails on the inside.

Unless
Hartman Jamison
was involved…then she was a fucking warm puddle of goo.

It was disgusting honestly.  She made herself want to puke.  For years, she’d been in love with Harley’s brother and Hart didn’t know she existed unless he needed something.

She was so done with this life.

Thinking back to the moment she’d fallen completely in love with her best friend’s brother, it was as clear in her mind as if it had happened yesterday.

Coming out of the girls’ locker room after cheer practice, the school was pretty much abandoned.  She’d spent time searching for her house keys and was late meeting Harley for their ride home with Hart.  Finding them under the bench where she must have kicked them, she was in a rush to make it out front.

She didn’t immediately notice the two young men standing outside.  When she did, she nodded with a ‘hey’ and kept going.  They weren’t familiar.

They fell into step beside her and started flirting.  Internally rolling her eyes, but experienced in dealing with the fragile egos of boys their age, she was polite but reserved.

“You should come hang out with us.  My friend really likes you,” the taller one said.

“I can’t.  I have two hours of homework to finish.  Thanks though.”

The shorter of the two frowned at her.  “You too good to hang out with us?  We’re nice guys.  Not athletes like those guys we see you with all the time but good enough for you.”

“I bet you’re giving it up for all three of those guys, huh?”  The tall one reached out to touch her hair and she flinched away.  “You’re too hot not to be.”

It wasn’t the first time such assumptions had been made about her and it wouldn’t be the last.
So much for being polite.

“You don’t know
me
, you certainly don’t know
them
, and you need to get the fuck away from me before I lose my temper.”

One of them grabbed the strap of her backpack, yanking that side of her body to the side.

Then the tall one tried to kiss her and she slapped him as hard as she could.  The other one grabbed her ponytail and wrapped it around his fist.  Opening her mouth to scream, a sweaty hand clamped over her mouth.  She was shoved against the wall in the empty hallway as they groped her roughly.

Bailey tried to bring her knee up but one of them stepped on her sneakered foot.

Suddenly, one found himself in a headlock, yanked violently away from her and the other’s hair was gripped hard in Hart’s fist.  Bigger by several inches and in peak physical condition, he held the boys easily.

“You alright?” Hart asked her gently.  She’d never seen such a look on his face before.  She nodded but silent tears slid down her cheeks.  “You’re not alright at all.”

He slammed the one he had by the hair face-first into the painted concrete wall.  There was a sickening crunch and his nose gushed blood.  The other, he turned.  Delivering three precise gut-shots, the boy fell beside his friend holding his midsection.

Both of them were crying as he crouched beside them.

“This is my sister’s best friend in the entire world.  Her name is Bailey and my name is Hart Jamison.  It’s important you remember.  If you ever so much as whisper her name or look in her direction, me and my two friends are going to make you wish you were dead.”  He slapped their cheeks lightly.  “Do I make myself clear?”

They nodded with a moan.

Standing, he grabbed Bailey’s bag, wrapped his arm around her shoulders, and guided her away.  When they were outside but still out of sight of his car where Harley waited, he brought her to a stop.  Facing her, she was unable to meet his eyes.

Without a word, he gathered her close and held her tight, his palm cupping the back of her skull.  “I’m sorry, Bailey.  I’m so sorry I didn’t get there sooner.”

He let her cry and it would be
years
before she’d ever do such a thing in front of him again.  She listened to the sound of his heart and he murmured soothing little things to her until she took a deep breath.  From his back pocket, he held up the brand-new basketball jersey they’d been issued at practice.  Taking his time, he wiped her face carefully and leaned forward to kiss her forehead.

It was the first time she truly saw Hart as a
man
.  As someone capable of not only protecting her, but drying her tears.  She’d loved him every single moment since.

He asked her if she wanted to call the police and she shook her head.  There was no way she was putting herself or her family through something like that.

“I…I just want to forget it happened.”  Glancing up into green eyes that would forever captivate her, she whispered, “Don’t tell Harley.”

“She worries about me.  I’m not very strong physically and I have a big mouth.”

His smile happened slowly and she didn’t realize she was holding her breath until she needed air.  “Bailey.  You have a beautiful mouth.”  Seeming to realize what he’d said, he quickly added, “You know, for a smart ass who’s like my little sister.”

Bumping her with his shoulder, he led her to the car and she settled in the backseat.  When asked why her face looked splotchy, she told Harley she fell and sprained her wrist.  Slapping her attacker had hurt her more than it hurt him.

“I’ll throw ice on it at your place.”

Nodding, Harley launched into their usual topic of what they planned to eat the second they could get to her kitchen.  She did her best to participate but she was still shaking on the inside.

They took her with them to the Jamison house.  It was where she spent the majority of her time anyway.  She even had her own room next door to Harley.

As the car turned into the neighborhood, she glanced up and caught Hart staring at her in the rearview mirror.

Over the last four years, he’d never mentioned that day to anyone as far as she knew and they’d never spoken of it again.  The boys who attacked her kept a low profile and gave Bailey a wide berth.  She watched them and she knew Hart did as well.  When they graduated the same year as the guys and moved away, she breathed a sigh of relief.

That day changed her life in so many ways.

Hart and his two best friends went off to college the summer Bailey and Harley ended their sophomore year.  She worried that her friend was in trouble with one of those friends.

Bailey didn’t trust him as far as she could throw him and she could see that Hart worried Beck was moving too fast for his little sister.

Watching her, seeing what Harley couldn’t or wouldn’t see, became her hobby.

A few days ago, the three young men returned home for Spring Break.

Initially happy to see them, within a couple of days, Harley went quiet and Bailey watched as Hart hooked up with two of his past girlfriends in the same week.

The three of them acted
strange
, especially Beck.

All of them had gathered around the huge dining table in the Jamison home a couple of days into their visit and laughed like old times.  For the first couple of hours, it was wonderful.

Harley was positively sparkling.  Bailey had personally helped her dress and was proud of how pretty her best friend looked.

Hart’s little sister was all about sports and was usually in running clothes and sports bras.

The girls worked together with Regina, Hart and Harley’s mom, to make dinner.  The three of them acted ridiculous when they got together.

Sending her daughter out to the garage freezer to get more corn for the soufflé, Regina and Bailey got involved with mixing and chatting about celebrity gossip.

Neither of them noticed how long Harley was gone until she returned to the kitchen, placed the corn on the counter, and went upstairs to her bedroom.  When she reappeared, gone were the sundress and heels she’d been wearing.  She was in jeans and a t-shirt.

Murder At The Bed & Breakfast by Dianne Harman
The Fire Within by Jan Springer
Swing by Opal Carew
The Impossible Ward by Dorothy Mack
The Good Enough Husband by Fox, Sylvie
Switch Hitter by Roz Lee
Muerte y juicio by Donna Leon
Claimed by the Mountain Man by Amelia Smarts
Paradiso by Dante
Promise Bridge by Eileen Clymer Schwab