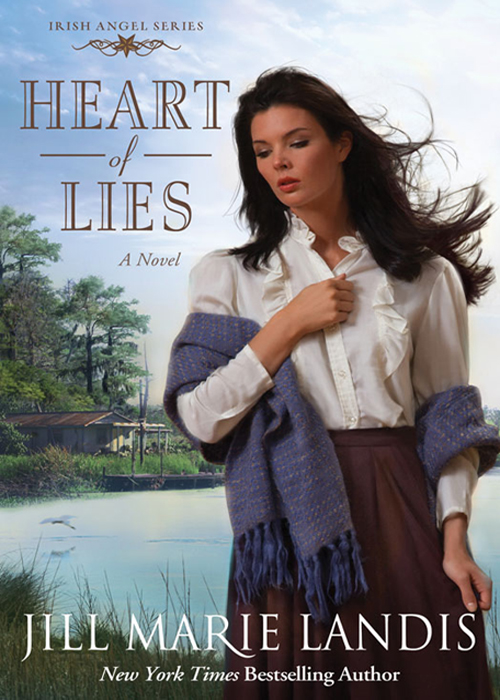 To the people of Louisiana —past, present, and future.

The L
ORD
will guide you always;

he will satisfy your needs in a sun-scorched land

and will strengthen your frame.

B
eneath a crescent moon, a crudely built cabin rested on crooked cypress stilts planted in the chocolate-brown water of the bayou. A dock lined the front. The back of the cabin touched the edge of marshland that was illusive at best, a muddy bog at worst. A thousand eyes watched from the slowly moving water, tall reeds, and rises — alligators, muskrats, mink, rats, deer, an occasional bear. Silent denizens of the swamp, they existed here at the whim of the water and the storms that blew in without warning.

Fall had arrived. The muggy heat of summer was gone, gentled by cool air that drifted down from the north. Soon hundreds of thousands of birds would flock south to the marsh to escape winter’s cold.

The bayou was a place of refuge for more than winged fowl. Humans, too, easily hid where back roads curled through dense overgrowth and miles of shallow, narrow waterways crisscrossed the swamp.

The cabin held one such human. Inside walls made of rough-hewn cypress planks lined with old newspapers, silence was broken by tormented sounds as Maddie Grande whimpered her way through a recurring nightmare. It was always the same, always
terrifying. Maddie was a child again, running frantically. Her bare feet slapped the cobblestoned streets of New Orleans as she fought to keep up with the lanky man in the lead. A blonde girl, not much taller than Maddie, tugged her by the wrist.

All she could see of the man was his back. His greasy dark hair hung beneath his wide-brimmed black hat and over his hunched shoulders. His coat was well-worn, threadbare around cuffs that didn’t reach his wrists. It swayed loosely from his shoulders, flapping as the three of them ran.

The other child, an inch taller, tightened her grip on Maddie’s wrist and whispered a warning. “Keep up. You can do it.”

Somehow Maddie knew that if she fell behind, a beating would be her swift reward. Like Mercury, fear fashioned wings on her feet.

The nightmare unfolded through a fog of forgotten memories, the edges of the vision blurred and tattered like the stained pages of a book left too long in the rain. The streets they traversed were cool and damp, the air close and warm. The sounds and smells around them familiar: New Orleans in early morning. Street lamps were extinguished as vendors at the French Market set up their wares and shouted to customers and each other in a patois of languages. Indians sold furs and herbs; farmers hawked fruits, vegetables, and spices. Hunters and butchers offered meats of every kind. Fishmongers promised a fresh catch and a bounty of seafood. People of every hue crowded the stalls.

Behind the scene, slaves hauled hogsheads loaded with tobacco, cotton, indigo, and cane to nearby warehouses. Refreshment stands lined the blocks near the market. The smell of gumbo and fresh-brewed coffee tainted the heavy, humid air.

No one noticed the ragtag trio fleeing past. Maddie, urged by the blonde, ran on.

Eventually they reached an area where homes stood alongside businesses. Now and again she glimpsed cool, shaded courtyards through gateway grilles. She longed to stop and dip her hand into one of the trickling fountains, to take a sip of water. But she was not
allowed to tarry. Air burned her lungs as she fought to keep up the breakneck pace. She had no doubt that the blonde girl would drag her body down the street if she stumbled and fell.

When the man suddenly halted, Maddie clasped her free hand to her side where a stitch ached like fire. She stared up at the wooden planks in a huge door before them. It was anchored to a thick stucco wall.

The older girl turned, but the face of the blonde child who so protectively clung to her hand never fully materialized. In its place was nothing but a pale oval, a wavering, shadowy void where a face should be.

That faded, faceless image filled Maggie — not only with terror, but with feelings of intense sorrow and loss.

The faceless girl slicked down Maddie’s hair and whispered, “I’ll watch out for you. No matter what.”

Maddie had suffered through the same nightmare countless times. Who was this child she mourned? Why did the nightmare haunt her, even in the best of times?

The skeletal man, just as unidentifiable, gave a phlegmy cough before he raised his hand and lifted the wrought-iron ring on the door knocker. It hit the wooden door with the hollow, ominous clang of a final heartbeat.

As the door swung open, the man faded from the nightmare. Maddie’s hand tightened; she clung to the older girl’s, and together they stepped over the threshold. The space around them narrowed to become a blood-red hallway. Flames licked the amber globes of flickering gas lamps along the walls. The girls’ shadows wavered and danced over a decadently expensive textured wall covering.

Maddie’s heart began to pound frantically. Scented perfume weighed heavily on the close air in the hall. She heard the sound of a door open and close. Now and again there came a throaty laugh, a moan, a cry.

Another man, different from the first but just as indistinguishable, suddenly appeared and came slowly toward the girls. Maddie’s
blood ran cold. He was as tall as the first but not as lanky. His crooked hat reminded her of a bent and broken stovepipe. The tails of his black coat flapped behind him as he strode forward.

Maddie was ever aware of the child beside her. She felt the other girl’s panic, felt her stiffen, heard her cry out. Suddenly the older girl’s hand was torn away, their hold broken.

The faceless child shouted, “No!” and tried to grab Maddie. Her cries were abruptly ended by the sound of a slap that cracked on the air between them.

Without warning, the man in the black coat hoisted Maddie to his shoulder. Handled with no more reverence than a bag of rice, she dangled head down, staring down at the whirling patterns of the red and gold carpeted floor. Her head began to swim. As the stranger scuttled along the crimson-lined hallway carrying her away, the other girl started screaming again and so did Maddie.

She kept on screaming as darkness closed around her. She screamed until shadows choked out the light. Everything faded away but the sound of her own voice.

N
ow her muffled cries broke the stillness on the bayou and filled the small cabin. Startled awake, no longer a child, Maddie Grande sat up drenched in perspiration and stared into the dark void around her. With the screams echoing in her head, she swung her legs over the edge of her moss-stuffed mattress and set her bare feet on the rough floorboards. She rose and stood for a moment beside her narrow cot listening to the creaks and groans of the cabin as the water lapped around the pilings. It was a comforting, familiar sound.

She padded across the room to where a tall pottery crock stood on a crooked shelf. Staring out a window above the shelf, she reached for a ladle, dipped fresh water from the crock, and brought the cool liquid to her lips.

Outside the window, a scant spoonful of moonlight filtered down through tall cypress trees, a wall of deep green that appeared
jet-black in the darkness. Draped with gray Spanish moss, the ghost forest towered over the swamp. Maddie stared past her reflection in the wavering glass and out into the darkness, acutely aware that she was alone in the cabin, alone in the swamp. Yet she had no fear. She had survived the streets of New Orleans. Out here on the bayou, most of what she feared was of nature, not of men.

Besides, she was not frightened of death. She had already lost those she held most dear. She had nothing left to lose.

She sighed, listened to the barely audible sound of slow-moving water, then reached out to press her palm against the cool glass. Her own image stared back at her, elusive in the muted light. Thick, dark-brown hair with barely a hint of a wave tumbled past her shoulders. Eyes of nearly the same color but for a hint of green stared back. There was not enough moonlight to reveal the nearly faded scar near the end of her right brow. Of how it came to be there, she had no memory.

As she turned, intent on returning to her cot, she heard the scrape of a wooden pirogue against one of the piers. Relieved, she let go another sigh. The twins were back.

She fumbled with the temperamental oil lamp on the table. The golden glow illuminated the interior, revealing the side of the room where Maddie slept. It was neatly kept, in stark contrast to the jumbled lair where the twins piled their nests of clothing, old pieces of traps, and things they were “due to fix” heaped around.

She heard heavy footfalls against the dock outside and turned as the door opened. Red-headed Lawrence, burly and broad shouldered, walked in first. The freckles that spattered his face melded together in the lamplight. His eyes were blue, shadowed by heavy lids that gave him the appearance of perpetual drowsiness. Lawrence appeared slow-witted only because he was accustomed to letting his twin brother, Terrance, think for him. He was so adept at sleepwalking through life, Lawrence rarely needed to think at all.

He nodded to Maddie and headed straight for a brown-and-white jug full of white lightening. Hooking his forefinger through
the ring on the neck, he lifted the cork and took a swig. Only then did he turn and smile at her.

But when he glanced back toward the open doorway, he wore a look of concern.

“What are you doing up, Maddie?” As if it were an afterthought, he took another swig and then set the jug in the middle of the table where Terrance would find it waiting.