Read Heart of the King Online

Heart of the King 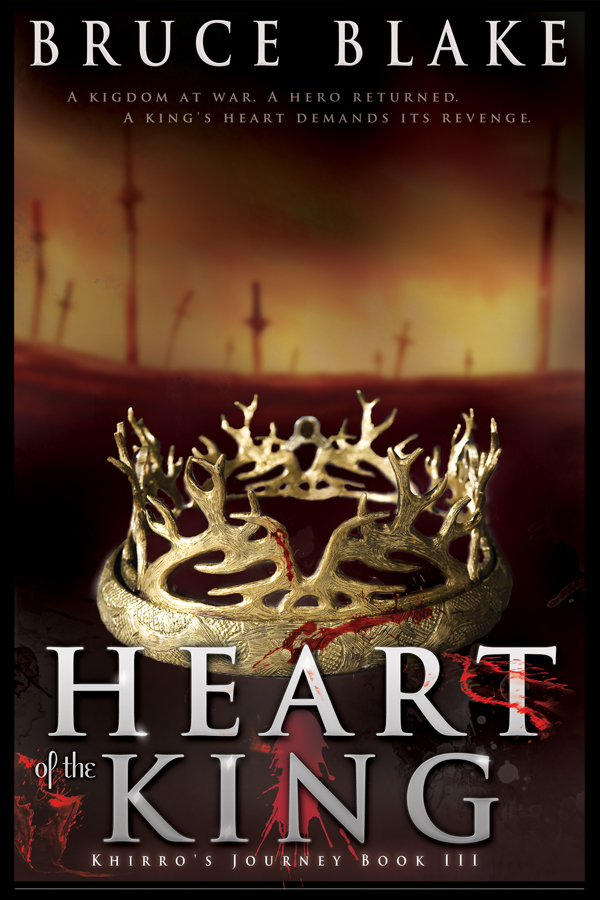 Heart of the King

This ebook is licensed for your personal enjoyment only. This ebook may not be re-sold or given away to other people. If you would like to share this book with another person, please purchase an additional copy for each recipient. If you're reading this book and did not purchase it, or it was not purchased for your use only, then please return to the ebook store and purchase your own copy. Thank you for respecting the hard work of the author.

Over the years, many people have produced gallons of coffee to fuel my creativity; without their dedication and mostly unknowing assistance, I'm not sure I would written anything at all. To express my thanks, this book is dedicated to all the baristas, brewers and coffee-slingers at all the coffee shops that have provided space, electrical power and free wifi to support my creative endeavors. These include, but are not limited to: Coffee on the Moon, Ducan, B.C.; In the Beantime, Ladysmith, B.C.; The Willow Street Cafe, Chemianus, B.C.; Serious Coffee-Mayfair and Oak Bay, Victoria, B.C.; and Starbucks-Oak Bay, Victoria, B.C.

Elyea
– a whore accompanied Khirro on his journey

Khirro
– A farmer conscripted into the King's army

Athryn
– a magician, brother of Maes, who joins Khirro's Journey

Shariel
– an assassin brought back from the dead

The Necromancer/Darestat
– an outlaw magician, the only one able to raise the dead

Shyn
– a border guard who accompanied Khirro on his journey

Ghaul
– an Erechanian soldier who accompanied Khirro on his journey

Callan
– a prisoner of the underground-dwellers

Rawl
– a soldier of Kanos

Hektor
– a soldier of Kanos

Tugg –
a soldier of Kanos

Mandich
– a soldier of Kanos

Jowyn
– a soldier of the King's army and friend to Khirro

Therrador sat on the pile of dirty straw, elbows on his knees, head hung. He didn’t raise his head when he heard the words.

Enough days had passed for him to lose track of their number; the guards had woken him every time he appeared to doze, and brought only water enough to keep him alive, nothing more. No food, no change of clothes, no medicine. The filthy bandage wrapped around his hand reeked of infection and the stump of thumb hidden beneath ached with numb pain, though not so much as the untended wound in his thigh.

A woman’s voice spoke the words, so he knew it to be either hallucination or the Archon toying with him. He had no interest in either.

“They still carry the essence of the king.”

The muscles in Therrador’s back and shoulders went rigid at the last words.

“Leave me be, witch. Haven’t you punished me enough?” His voice cracked in his parched throat and its tone of defeat surprised and embarrassed him.

The temperature in the cell dropped and the feeling of a presence beside him brought goose flesh to Therrador’s arms. He looked up into the burning green eyes of a young woman, her freckled cheeks framed by red curls, and thought she might be the most beautiful woman he’d ever seen.

“You’re not real,” Therrador croaked. “You’re another of the Archon’s tortures.”

She crouched in front of him and held her hand out to him. In the dim light cast by the torch in the passage outside the cell, and with his lack of strength and focus, it took a minute for Therrador to realize she held a cup.

He stared at it but made no move to accept it. The woman didn’t move, either.

Therrador considered for another moment before reaching out a weak and shaking hand. His fingers brushed the side of the clay mug, felt its solidity, its
realness.
Saliva rushed into his mouth at the thought the cup may contain relief from the thirst burning at the back of his throat, but he kept his eagerness carefully hidden. His fingers wrapped around the vessel’s cool surface and brought it close to his face; he peered over the lip at the liquid inside.

He leaned closer to it and sniffed deeply.

The edge of the cup touched his mouth and a splash of water lapped against his lips. Cool, tasteless. He slurped a little onto his tongue, the promise it held making his parched throat howl for more and, before he could stop himself, Therrador quaffed the water as fast as his mouth would take it. Water spilled over his chin, ran down his neck into his shirt. The cup’s supply never seemed to end allowing him to drink and drink and drink.

He drank until his belly hurt.

Energy flowed back into the king’s limbs. He pulled his mouth away from the rim of the cup and tilted his head back, drawing a satisfied breath in through his nose before gazing at the woman’s face. Her full lips tilted up at the corners in a gentle smile, her eyes shone. He didn’t know her, had never seen her before, but inexplicably felt he should trust her.

“You’ll know him when he comes, but he’ll need your help.”

Therrador scratched his stubbled cheek, felt the heat of fever burning in his head, and wondered if this woman and her words could be real. He turned the clay cup between his fingers; it felt real enough.

If the man bearing the king’s blood was coming, and he aided him, perhaps the Archon might be defeated. But this knowledge of her enemy’s inevitable arrival might also be the bargaining chip he needed to get his son back. He looked toward the cell door and saw the shadow of his undead guard beyond, so leaned toward the woman. She smelled of roses.

“When will he come?”

“Soon, and there will be a battle. That is where your help will be needed. Not even the king’s spirit can defeat the army of Kanos without help.”

Therrador nodded and stroked the long beard trailing from his chin, the braid which normally held it in place abandoned soon after he landed in the dungeon cell.

The tips of her fingers brushed his wounded thigh. Pain flared along Therrador’s leg as if she’d touched him with a lit torch, and he sucked a breath between his clenched teeth, biting down against the agonized cry in his throat. The wound throbbed and burned, his body tensed. She pressed her palm flat against it and, a minute later, the pain settled to a tingling sensation, then finally disappeared.

The woman removed her hand and Therrador replaced her touch with his own. The flesh felt tender and sore, but the wound was gone. He raised his right hand wrapped in the stinking bandage, hoping she would do the same for the wound beneath the gray cloth. She looked at it and shook her head, then stood, and Therrador saw her form was translucent.

“You have some time, but not much.”

The imprisoned king stared as she seemed to float across the cell toward the door, feet hidden beneath her long white gown. She didn’t pause when she reached the bars, but passed through and faded from sight like a morning mist burned away by midday sun.

Therrador touched the back of his hand to his forehead and found his fever had broken, disappeared along with the wound to his leg. Perhaps sickness and hallucination weren’t to blame. The king had never believed in apparitions, but neither did he believe in men brought back from the dead until they laid siege to the fortress. It had been a season of oddities: the king’s blood, undead soldiers, and now a spirit come to his aid.

Is this an opportunity to save my son, or is my mind finally snapping in two?

If the ghost’s words were true, he had little time to decide which was the case and how to best use it to his advantage.

He rose from the filthy straw, joints creaking with disuse, and brushed dirt from the seat of his breeches before taking an unsteady step toward the cell door. When his previously injured leg didn’t falter beneath him, he strode across the floor, energized by the ghostly woman’s water. He reached the bars and wrapped the fingers of his good hand around the cold steel, pulled his face close. A short way down the hall, his undead guard stood motionless, staring at the blank wall ahead, as always.

It didn’t see the woman.

“Guard,” he called, his voice strong and filled with the authority bred of years commanding men. “I need to see the Archon. Now.”

“This ghost woman will alert you to the king-carrier’s arrival?”

The Archon watched Therrador’s expression closely for any hint he told her untruths. She knew at least elements of his story were truthful: her assassin, Shariel, had failed to kill the bearer, and the traitor-king’s description too closely matched that of the woman Elyea to have been fabricated.

“That’s what she said. He hasn’t arrived yet, but he’ll be here soon.”

Therrador shifted on the uncomfortable wooden chair and the Archon suppressed a grin because she knew her translucent gown caused his discomfort, not the furniture. When the king had demanded an audience, she’d chosen her clothing purposely, knowing her body was as useful a tool as her magic. More than once during their conversation, Therrador’s gaze strayed to the curve of her hip and to her dark nipples showing through the pink gown, despite his efforts to hold her eyes.

She rose from the purple velvet divan and his eyes dropped from her face once again to a spot below her waist before he shook his head and returned his gaze to hers. This time she smiled.

“And in exchange for your freedom, you will advise me when she contacts you.”

He nodded, this time finding success at keeping his eyes on hers.

“How do I know you will be true to your word?”

She stopped a few feet from where he sat, her breasts at the same level as his eyes. Rather than battle temptation, he stood.

“Indeed. Why are you not asking for his release in exchange for this information?”

“Because I know you wouldn’t grant it.”

She took a step toward him, grasped his bound hands in hers. Black dirt and dried brown blood
discolored
the bandage on his right hand; the smell of infection wafted from it.

“We will have to take care of this or you will not be with us long enough to betray your friend a second time.”

She saw the muscles in Therrador’s jaw flex at her words and her smile widened.

“I will consider it, but let us see what the maggots can do for you first.” She snapped her fingers and a guard appeared in the doorway. “Fetch the surgeon. Tell him to bring his maggots to clean King Therrador’s wound.”

The soldier bowed at the waist and disappeared out the door. When he was gone, she faced Therrador again. His eyes were still fixed on hers, his jaw set, and she felt anger build in her gut at his resistance of her.