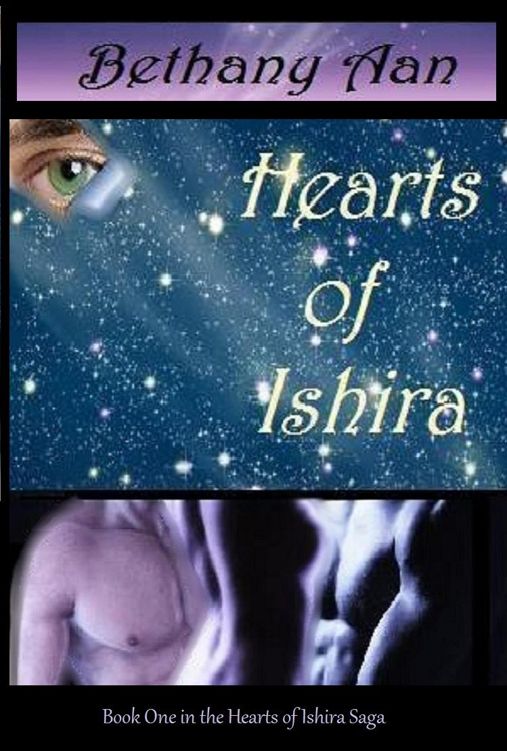 note from the author

where to find Bethany-1

No part of this book may be reproduced in any form

or by any means electronic or mechanical,

including information storage and retrieval systems,

without prior written consent of the author.

who may quote short excerpts in reviews.

Hearts of Ishira
is a work of fiction.

Names, characters, places, and events are purely the imagination of the author.

(Except for the thing about the bee. That really happened.)

A Note from the Author:

It takes many months of long, hard hours

by purchasing additional copies if you wish to share.

who not only introduced me to sci-fi at an early age,

but kept enabling me throughout my life by buying me books whenever you could.

For the gifts you have given me, I can never repay you.

I love you so very much, Momma.

To the best cheerleaders and beta readers

an author could ever have, who kept me sane,

my cousins Arwen and Deborah,

and which ones you couldn
’
t get enough of!

And saving the best for last, to my husband
.

You never gave up on me.

You believed in me and loved me when I could see no real reason to do either.

Every hero I write about has part of you within him,

and every time my heroine falls in love with one (or more!) of my heroes,

I fall in love with you all over again.

I would never have truly understood the wonder of

‘
happily ever after
’
if not for you.

Pain. Horrific, brutal agony. In her leg, her chest, her head.

Arianna held very still, taking mental inventory of her immediate reality. It felt like a spike was thrusting through her skull, making it almost impossible to think. She cried out softly, unable to keep the soul- deep groan inside. Her body shuddered with nausea from the pain, but she felt that she needed to move, to clear her head.

From a distance, through the blood thrumming in her ears, she could hear screams. She had to get up, to do something to protect herself, though she didn’t know from what. Opening her senses, she fought to understand what was going on.

The emotions and terror of other people close by crowded in on her, threatening to overwhelm her. Her natural empathy allowed her mind to feel what the others felt, their terror, pain, confusion. All of their emotions only added to her own, threatening to consume her. She had to get herself under control, and fast. As her mind began registering immediate threats, it slammed a mental shield in place, effectively silencing the fear and pain from her companions and allowing her to concentrate on herself for a moment.

Drawing on the coping mechanisms learned from far too much experience with crippling pain, Ri sought to even out her breathing, slow her heart rate. She had to control the pain before she could do anything else. Fighting the urge to take a deep breath or to clench each muscle in her body and curl up against the agony, she sought to quiet everything in her being. She sent every ounce of fear and pain into her clenched fists, then concentrated on the tranquil lake of her soul as her hands warmed, tingling. Once she had a moment of stillness, she opened her mind, reached down into a well of energy and renewal that she hadn’t known she possessed until recent years, and opened the path that allowed her own healing energy to flow through her. Ignoring everything outside of her for the moment, she sent bursts of power into the epicenters of her injuries, breathing as slow and evenly as she could as she waited for it to take hold. Tears leaked from her eyes and slid through the dirt on her face, but she did her best to ignore them and focused on suppressing the pain.

The agony slowly reduced to a manageable level. Still excruciating, but no longer as debilitating.

Within her head, a heavy
whomp-whomp-whomp
thudded slowly, her blood moving through her ears, blocking out most of the outside sounds. Her eyes tightened, her vision narrowing to a nearly impenetrable fog. She breathed through it all, knowing it would pass, that the gray cloud fogging her brain would clear in a few moments. She would be able to hear once more, as well. The whomping would end, the mist would lift, and she would open her eyes to find out which had run over her… a tank or a double-decker bus?

With a burst of inanity, her mind focused on the bus. She wasn’t a fan of the military, after all.

Startled, she thanked the cosmos that at least she still had her sense of humor. Good. She had a feeling she’d need it. She opened her eyes and had nearly recovered her senses when pain began creeping back in, stabbing at her on all fronts. Startled by the sudden resurgence, she automatically repeated her mantra.

Better, she thought as the intensity lessened, but she frowned to herself. The pain should have stayed away longer than just a few minutes. How badly was she hurt?

And she was weak, so weak. Too weak. From pain? Blood loss? She was hurt, badly. Was she cut? Bleeding?

A surge of energy exploded through her at that thought.

Ri’s eyes popped open with the sudden onslaught of power. The gray cleared immediately, the
whomping
faded away.

Suddenly, there were noises again. Screams. The patter of rain. Running water, insects, the movement of animals in the underbrush nearby.

She focused on the screams. Screaming was bad. Screaming meant something was wrong.

Opening her senses once more, blinking to clear her eyes, she quickly explored the terror, pain, and confusion from younger people all around her.

The natural urge to fix whatever was wrong, to find out what was going on and to help make it right, surged through her, lending extra energy to her efforts.

Ri slid her hands forward, bringing them to her sides. It hurt, but she could do that much. Very carefully, she tried to lift her upper body, take a look around.

She felt like she was being ripped in half. Agony speared through her torso, taking her breath and her focus. Shit! What the hell had happened to her?

Dizziness swamped her, triggering the mantra.

It was taking longer to control the pain when it spiked.

Not good. This was not good. She must be hurt worse than she thought.

Consumed with the need to act quickly and find help, Ri opened her mind and reached out with her senses, trying to find someone, anyone, that might be able to help her those with her that might need it. She didn’t really expect to find an answer, so she was stunned as she felt the surprised response from another mind. Grasping to the other consciousness, a distance from her location, she repeated the call for help, sending a bit of the pain she was in, as well as the screams and emotions from around her.

The other mind immediately sent back an assurance of assistance, and as Ri’s energy flagged from the contact, she somehow knew that, who or whatever that mental touch belonged to, he was already sprinting into action, coming to her aid.

Opening her eyes once more, she focused only on what was around her.

There were trees, bushes, vines… but none of them even remotely familiar. The trees had teal foliage, not green. Their trunks were black with copper veins running in and out of the bark. The vines were unlike anything she’d ever seen before, some with spikes and thorns longer than her hand and flowers that would have challenged her favorite fantasy artist to recreate. The colors were so far removed from her experience that the forest melded into a sort of Monet-esque watercolor of brush strokes…colors she knew but not in shapes she recognized. Her brain couldn’t process the differences at the moment. She shifted her gaze as insect-like creatures flew, crawled, or trundled over the forest floor.

Summer Attractions by Beth Bolden
Starlight by Stella Gibbons
All She Wants For Christmas by Paige Tyler
Fifty Shades of Alice Through the Looking Glass by Melinda Duchamp
One of Many by Marata Eros, Emily Goodwin
Trace of Innocence by Erica Orloff
My Autobiography by Charles Chaplin
Stripped Bare by Kalinda Grace
Dark Winter by Andy McNab
Resisting the Billionaire by C. C. Snow