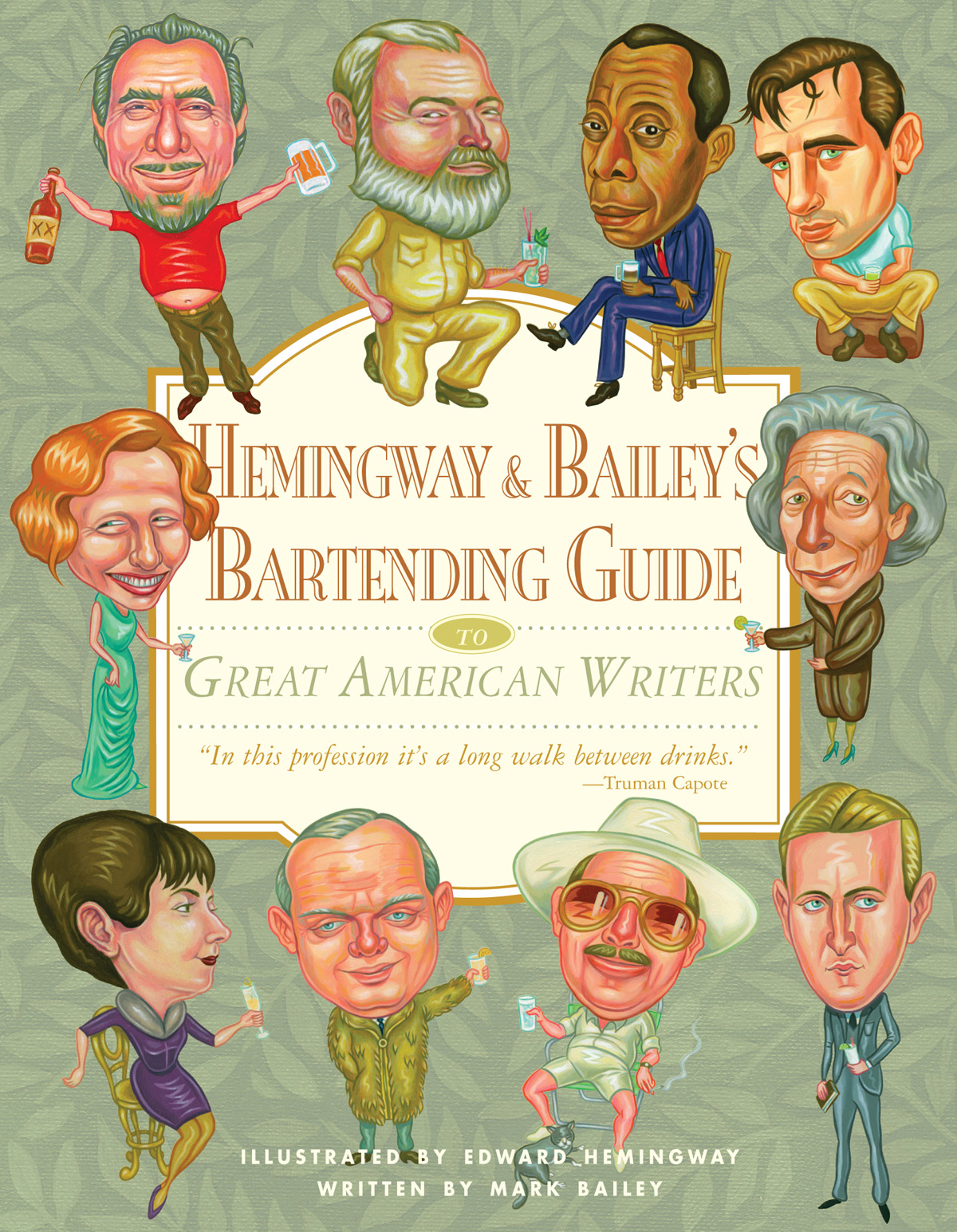 “It has been my experience that folks who have no vices have very few virtues.” —
Abraham Lincoln

Tools of the Trade

JAMES GOULD COZZENS
Half and Half

This book grew out of a simple observation: writers like to drink. Not all writers, of course, but most. Or at least they used to. The writers in this book, for example, forty-three great men and women of American letters. From James Agee to Thomas Wolfe, the list includes five Nobel Laureates and fifteen Pulitzer Prize winners, not to mention the National Book Award winners, Academy Award winners, and just plain best-sellers. It’s a who’s who of our nation’s most accomplished novelists, short-story writers, poets, playwrights, journalists, and critics. And they all loved their liquor.

The two of us were talking about this one snowy night a few years ago. We were at a Christmas party in a bar in Greenwich Village, sitting on barstools drinking beers and feeling a touch nostalgic. The night had not started out that way. For any number of reasons (the cheer of the holiday season, the beauty of snow falling in New York, the pleasure of an open bar), we had been looking forward to a pretty serious bender. Yet to our surprise, the party was not with us. There we were, in a bar filled with writers, and the crowd could not have been more tame.

In the good old days, we imagined, things would have been very different. In the good old days, the myth of the hard-drinking writer was not just a myth. But clearly that world had disappeared long ago. Still, the stories remained—F. Scott and Zelda Fitzgerald showing up at
parties in their pajamas, Ernest Hemingway busting John O’Hara’s walking stick over his own head, John Steinbeck and Robert Benchley diving for wine bottles at the bottom of a pool. The drunken tales of wilder times. And, of course, the cocktails survived too, if barely—the Sidecar, the Stinger, the French 75—like the language of a lost civilization. We ordered more beers. But wasn’t that at least something—the stories, the cocktails? We took another sip. And wouldn’t it be something greater still to travel back, even if only in spirit?

We decided to give it a try. One more round, but this time a Mojito, as Hemingway would have had it. And a Gin Rickey for Fitzgerald. We watched the bartender line up the glasses.

In New York, Los Angeles, Paris, at places like the “21” Club, the Musso & Frank Grill, and the Ritz Hotel, classic writers drank classic cocktails. Some had clear favorites. Others were more fickle. What they shared, though, was a common thirst and a high regard for the well-made drink.

Through research, deduction, and a little imagination, we have tried to honor that with our own recipes. We have tested every cocktail in this book—tested and re-tested. They are well-made drinks, true to the spirit of their day and, as important, delicious too.

When asked about writers and their affinity for alcohol, Truman Capote quoted Irish playwright Brendan Behan, “We are drinkers with writing problems.” It was a confession
of sorts, that the scales had tipped for him. Maybe they tipped for other writers in this book too. Why did they drink so much? Did alcohol help or hurt their writing? These are worthwhile questions and there are no easy answers. But then this is, after all, a bartending guide, and who are we to say.

What we have done is to offer up some brief excerpts from their literary works. Tidbits from the novels and short stories, the plays and poems and articles that made these writers great. One thing is clear: however pickled these writers may have been, they left an extraordinary body of literature behind for us.

So let’s lift the first glass to them, to these forty-three great men and women. It is our hope that through their drinks, their stories, their colorful faces, that you too will be able to travel back—to the good old days. All we ask is that you be a little careful as you go. Remember, a couple of cocktails doesn’t make you a drunk, and no amount of liquor can make you a writer.

Tools of the Trade

(One-to-one ratio, as much as desired for use or storage.)

Stir 1 cup of granulated sugar and 1 cup of water in a saucepan over medium heat. Bring to a light boil and then let simmer until sugar is completely dissolved. remove pan from heat, and let cool.

If storing, pour cooled syrup into a glass bottle or jar, cap tightly, and refrigerate. Should keep for a week.

An Italian Affair by Jodi Luann
Bad to the Bone by Stephen Solomita
Fieldwork: A Novel by Mischa Berlinski
The Thief by Megan Whalen Turner
Diamond Buckow by A. J. Arnold
Trapped by Gardner, James Alan
The Importance of Being Kennedy by Laurie Graham
The Proposition 1: The Ferro Family (The Proposition: The Ferro Family) by Ward, H.M.
Resurrection (The Inherited War) by Eric McMeins
Lovers of the Galaxy: Book Three: Raiders of the Lost Heart by Trinity Blacio