High Crimes and Misdemeanors: The Case Against Bill Clinton 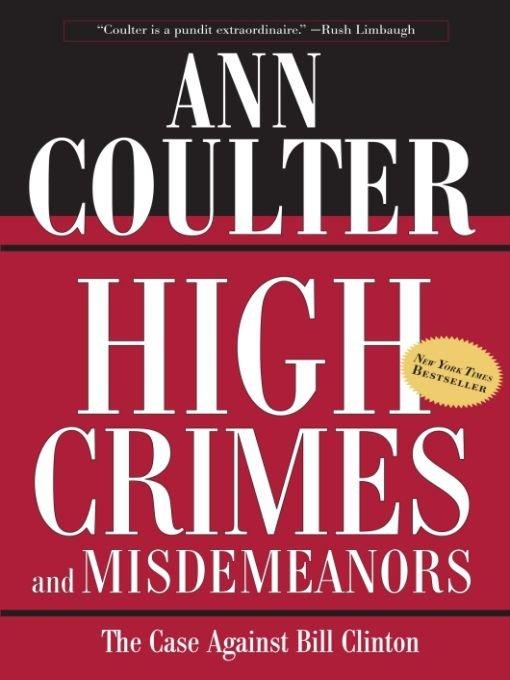 Table of Contents
Title Page
Dedication
Chapter One - Just Do It

VICTIM OR THE CRIME

BIMBO ERUPTIONS DURING THE 1992 CAMPAIGN

KEEPING UP WITH JONES

STARR’S REINCARNATION AS A HARDLINER

OBSTRUCTION OF JUSTICE “ABOUT SEX”

ALL THE PRESIDENT’S FAULT

CAN’T WIN IN THE SUPREME COURT? CALL THE IRS

“BERNIE, ARE YOU HIDING SOMETHING?”

THE ODDITIES PILE UP

THE WHITE HOUSE HIDES THE TRUTH

A FELON IN THE DEPARTMENT OF JUSTICE

THE LIPPO GROUP CHIPS IN

THE PRESIDENT EXPLAINS EVERYTHING

HELP ON THE WAY

THE CASE AGAINST BABBITT

VIRTUE MEANS MORE THAN NOT BEING A FELON

IMPEACHMENT IS THE MOTHER OF ACCOUNTABILITY

HIGH CRIMES AND MISDEMEANORS THROUGHOUT HISTORY

THE NEAR IMPEACHMENT OF PRESIDENT NIXON

THE OKIE FROM MUSKOGEE

IMPEACHMENT OF A PRESIDENT FOR OBSTRUCTION OF JUSTICE

IMPEACHMENT OF A PRESIDENT FOR LYING

IMPEACHMENT OF A PRESIDENT FOR PERSONAL MISCONDUCT

EYES OF THE WORLD 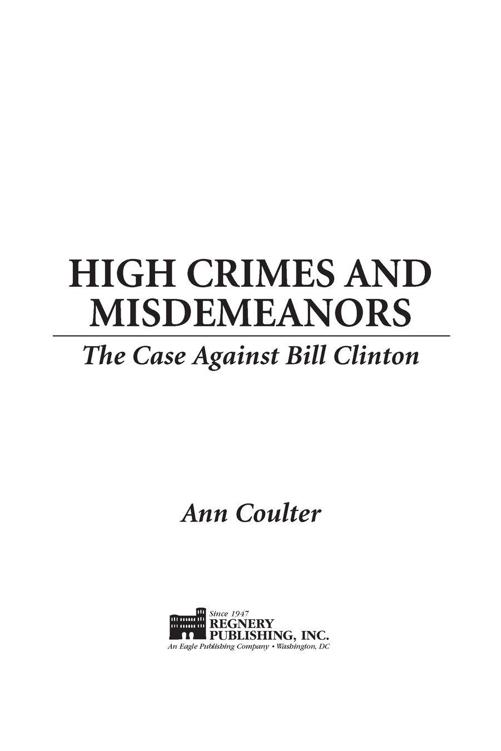 FOR MY PARENTS,
who see virtues in the British system.
The President, Vice President, and all civil Officers of the
Unites States, shall be removed from Office on Impeachment
for, and Conviction of, Treason, Bribery, or other high Crimes
and Misdemeanors.
—United States Constitution, Article II, section 4
Chapter One
Just Do It
Compared to the long hours
and amazingly tedious work of practicing law, political punditry has much to recommend it. In only one respect does practicing law compare favorably with practicing punditry, but it is an important one. In the law, there are standards, rules, and precedents that must be adhered to by everyone—trial judges, opposing counsel, jurors, appellate courts, even, in theory, the Supreme Court. The first principle of law is that like cases are supposed to be treated alike.
Political commentary is completely different. Like cases are treated unalike with such alacrity as to make the head spin. No general principles can ever be adduced. If a pundit opines that there is no constitutional basis for President Bill Clinton’s claimed immunity from civil suit, that is assumed to be a political preference, rather than an attempted interpretation of the law… and half the time it is. Pundits left and right
1
switch sides with barely a blush, depending on whose president is being gored.
Nevertheless, there are standards and precedents and rules about the conduct of public men, presidents in particular. It cannot be the case, for example, that President Richard Nixon “shredded the Constitution” for
inquiring
about having the Internal Revenue Service (IRS) audit his political enemies (request declined), but that President Bill Clinton is an innocent victim of—in his wife’s words—“a vast right-wing conspiracy” when he
succeeds
in having the IRS audit his political enemies. The evidence for either claim may be disputed—to a point—but the answer to whether politically motivated IRS audits are right or wrong should not depend on who the president is, or who the enemies are.
ADS
15.4Mb size Format: txt, pdf, ePub