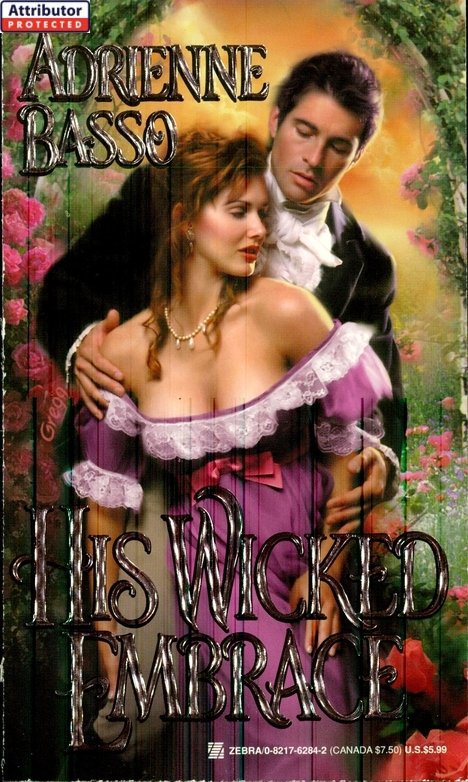 WICKED PLEASURES
Isabella's now restless fingers moved down across Damien's hard shoulders, feeling the sleek muscle and sinew. She tensed against him as the excitement within her grew to an almost unbearable level.
Damien pulled her completely down onto the carpet, then rolled her onto her back. He settled his body intimately atop hers, staring into her eyes with an intensity that made Isabella tremble. The air felt suddenly closed and heated.
“I'm going to remove the rest of your clothing, Isabella.” The deep, sensual timber of his voice made her shiver.
“Wait!” Isabella insisted. “I want to remove some of your clothing first.” When he offered no protest, Isabella reached for him. Curious and excited, she began to open the last few fastenings on his shirt. Damien shifted his weight and gave her an odd smile as she struggled with the buttons.
“Just rip it,” he whispered in a deep voice, and he inhaled deeply as Isabella followed his commands. Buttons spewed about the room, and Damien laughed with delight.
Nervous but determined, Isabella continued her explorations. Deftly she reached inside the linen and spread her hands across Damien's naked chest. The springy dark hair tickled her palms. The flesh beneath felt smooth and very hard. Experimentally, she moved her hands lower, across the flat plane of his stomach to the top of his breeches.
A long shudder ran through Damien. “Enough,” he whispered, yanking off the remains of his shirt and tossing it aside. He pulled Isabella closer and kissed her deeply, his passion becoming more urgent with each kiss, his need more overwhelming with each caress . . .
BOOK YOUR PLACE ON OUR WEBSITE AND MAKE THE READING CONNECTION!
We've created a customized website just for our very special readers, where you can get the inside scoop on everything that's going on with Zebra, Pinnacle and Kensington books.
Â
When you come online, you'll have the exciting opportunity to:
â¢ View covers of upcoming books
â¢ Read sample chapters
â¢ Learn about our future publishing schedule (listed by publication month and
author
)
â¢ Find out when your favorite authors will be visiting a city near you
â¢ Search for and order backlist books from our online catalog
â¢ Check out author bios and background information
â¢ Send e-mail to your favorite authors
â¢ Meet the Kensington staff online
â¢ Join us in weekly chats with authors, readers and other guests
â¢ Get writing guidelines
â¢ AND MUCH MORE!
Visit our website at
http://www.zebrabooks.com
HIS WICKED EMBRACE
Adrienne Basso