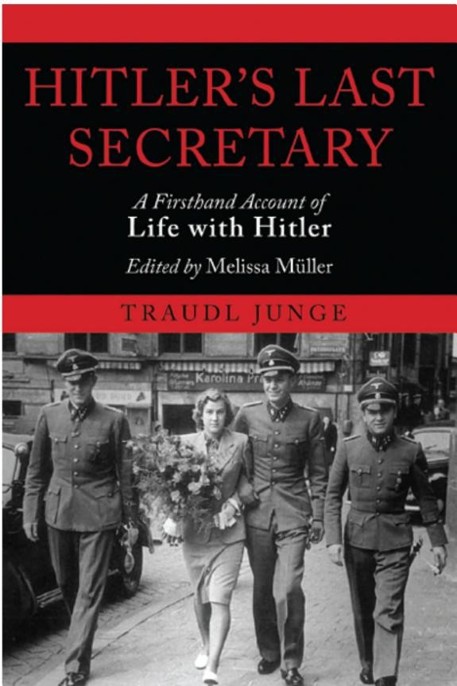 Edited by Melissa Müller
Translated from the German by Anthea Bell

Arcade Publishing® is a registered trademark of Skyhorse Publishing, Inc.®, a Delaware corporation.

‘We cannot put our lives right in retrospect; we must go on living with the past. We can put ourselves right, however.’

Reiner Kunze:
Am Sonnenhang
[On the Sunny Slope].
Diary of a Year

A Childhood and Youth in Germany

My Time with Adolf Hitler –

This book is neither a retrospective justification nor a self-indictment. I do not want it to be read as a confession either. Instead, it is my attempt to be reconciled not so much to the world around me as to myself. It does not ask my readers for understanding, but it will help them to understand.

I was Hitler’s secretary for two and a half years. Apart from that my life has always been unspectacular. In 1947–48 I put down on paper my memories, then still very vivid, of the time I had spent close to Adolf Hitler. At this period we were all looking to the future and trying – with remarkable success, incidentally – to repress and play down our past experiences. I set about writing my memoirs objectively, trying to record the outstanding events and episodes of the immediate past before details that might later be of interest faded or were forgotten entirely.

When I read my manuscript again several decades later, I was horrified by my uncritical failure to distance myself from my subject at the time, and ashamed of it. How could I have been so naive and unthinking? But that is only one of the reasons why, until now, I have been reluctant to let the manuscript be published in my own country. Another reason is that in view of the huge amount of literature about Adolf Hitler and his ‘Thousand-Year Reich’, my own history and observations did not strike me as important enough for publication. I also feared avid sensationalism and approval from the wrong quarters.

I have never kept my past a secret, but the people around me made it very easy for me to repress the thought of it after the war: they said I had been too young and inexperienced to see through my boss, a man whose honourable façade hid a criminal lust for power. By ‘they’ I mean not just the denazification commission which exonerated me as a ‘youthful fellow traveller’, but all the acquaintances with whom I discussed my experiences. Some of them were people suspected of complicity with the Nazis themselves, but others were victims of persecution by the regime. I was only too ready to accept the excuses they made for me. After all, I was only twenty-five years old when Nazi Germany fell, and more than anything else I wanted to get on with my life.

Not until the middle of the 1960s did I gradually and seriously begin to confront my past and my growing sense of guilt. Over the last thirty-five years that confrontation has become an increasingly painful process: an exhausting attempt to understand myself and my motivation at the time. I have learned to admit that in 1942, when I was twenty-two and eager for adventure, I was fascinated by Adolf Hitler, thought him an agreeable employer, paternal and friendly, and deliberately ignored the warning voice inside me, although I heard it clearly enough. I have learned to admit that I enjoyed working for him almost to the bitter end. After the revelation of his crimes, I shall always live with a sense that I must share the guilt.

Two years ago I met the writer Melissa Müller. She came to see me to ask me, as an eyewitness, some questions about Adolf Hitler and his artistic predilections. Our first conversation led to many more, about my own life and the long-term effect that my association with Hitler had on me. Melissa Müller is of the second post-war generation, and her views are formed by what she knows of the crimes of the Third Reich. However, she is not the kind of self-righteous person who always knows better after the event; she does not think so simplistically. She listens to what we contemporary eyewitnesses who were once under the Führer’s spell have to say, and tries to trace the phenomenon back to its roots.

‘We cannot put our lives right in retrospect; we must go on living with the past. We can put ourselves right, however.’ This quotation from Reiner Kunze’s
Diary of a Year
has become a major guiding principle in my life. ‘But public grovelling is not always to be expected,’ he adds. ‘Shame felt in silence can be more eloquent than any speech – and sometimes more honest.’ Melissa Müller finally persuaded me to make my manuscript available for publication after all. I thought: if I can manage to make
her
understand how easy it was to fall for the fascination of Hitler, and how hard it is to live with the fact that I now know I was serving a mass murderer, it ought to be possible to make other readers understand too. At least, I hope so.

Last year Melissa Müller introduced me to André Heller, whom I regard not only as an extraordinarily interesting artist but also as someone steadfastly committed to his moral and political views. My long conversations with him were another very valuable incentive for me to confront the girl who was once Traudl Humps, and with whom I had been at odds for so long. Many of our conversations took place with a camera running. André Heller and Othmar Schmiderer made their documentary film
Im toten Winkel [Blind Spot. Hitler’s Secretary]
from this footage. The film appeared in the German-speaking countries at the same time as this book.

Sometimes you will hear the ‘young Junge’
*
speaking in this book, sometimes the old Junge. The young Junge, as if posthumously, has been persuaded to let her early memoirs be published by the ever-growing interest in an insider’s knowledge of the Nazi regime, and she hopes they will cast some light on the period. The old Junge does not set out to preach morality, but still hopes she may make a few remarks that are not as banal as they may at first appear: appearances are often deceptive, and it is always worth while taking a closer look. We should listen to the voice of conscience. It does not take nearly as much courage as one might think to admit to our mistakes and learn from them. Human beings are in this world to learn, and to change themselves in learning.

*
Traudl Junge is playing on the literal sense of her surname:
jung
= young.

A CHILDHOOD AND YOUTH
IN GERMANY

A
time between times. Munich 1947. Once the ‘capital of the Nazi movement’, the city is now in ruins. Its people are exhausted by cold and hunger, but at the same time they are making a new beginning. Miserable destitution and an overwhelming lust for life co-exist in striking juxtaposition. Traudl Junge is twenty-seven years old, a high-spirited young woman eager to get on with her life. She has been ‘exonerated’ by the denazification commission on the grounds of her youth-fulness. She works as a secretary, frequently changing jobs. You live from day to day now. Traudl Junge is considered a good worker. A reference written for her at the time dwells in particular on ‘her quick understanding, good letter-writing style, and her typing and shorthand, which are well above average.’ In the evenings she regularly goes to the cabarets and little theatres shooting up like mushrooms in the city. Money, food and cigarettes are in short supply. Friends and neighbours stick together and share what they have. Traudl Junge’s life lies before her, and so – she hopes – do love and great happiness. She has no very clear idea of the future, but she believes in it.

Munich 1947. Once the ‘capital of the Nazi movement’, the city is now in ruins. Traudl Junge is twenty-seven years old and has been a widow for three years. Her last employer, ‘the best I’ve had yet,’ she says, is dead, and many of her closest colleagues from the war period are missing without trace. She doesn’t know if they have been taken away to Russian camps or committed suicide. She herself has survived several months in Russian prisons, a protracted attack of diphtheria and an adventurous escape from Berlin to Munich. She has returned with mixed feelings, afraid of being pilloried or shunned. She does not hide the fact that she was Hitler’s private secretary for two and a half years, and is relieved to find how little interest anyone takes in her past. Even her mother doesn’t want to know any more about it. She does often get sensation-seekers asking avidly,
Do tell us, is Hitler really dead?,
but no one seems to want to hear details, let alone attempts of any kind to explain or justify herself. Others make light of her vague sense of guilt for serving a genocidal murderer and thus sharing in the blame for his crimes.
You were still so young
… In 1947, the process of forgetting is well under way, as self-protection for Nazis, their fellow-travellers and their victims alike.

One leading lady, two scenarios – both of them accurate.

Traudl Junge’s life splits in two in the early post-war years. On one side of the split are the memories weighing down on her of that carefree time in Adolf Hitler’s circle and its dramatic finale. She is alone with those memories. On the other side is everyday life among the ruins, with its immediate privations and pleasures. These she can share with others – friends, acquaintances, her mother and her sister.

The Roots of Betrayal by James Forrester
Seeking Vengeance by McDonald, M.P.
Classic Calls the Shots by Amy Myers
What Happens Abroad by Jen McConnel
ARISEN, Book Twelve - Carnage by Michael Stephen Fuchs
If the Shoe Fits by Amber T. Smith
Alvarado Gold by Victoria Pitts-Caine
Giver of Light by Nicola Claire
Renounced by Bailey Bradford
A Wedding in Africa (The Africa Series) by Carnegie, Shirley