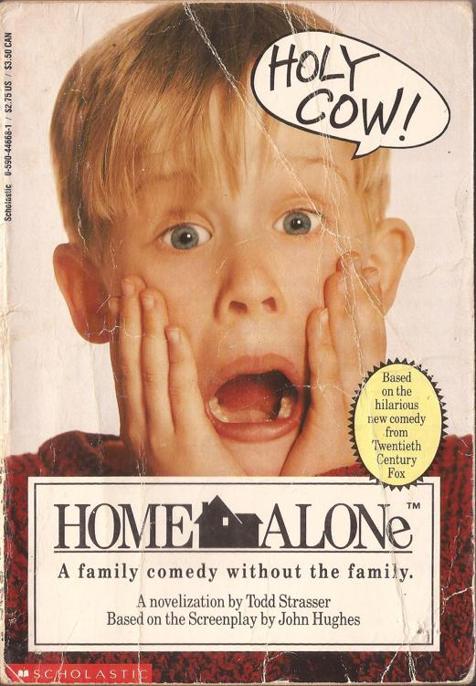 A novelization by Todd Strasser
Based on the Screenplay by John Hughes
To Michael, Andrea and Noah Strone

Kevin McCallister, aged seven, wandered through his house, looking for something to do. He was a thin boy, still waiting for a significant growth spurt. He had brown hair and almost all of his adult teeth.

Just about every room in the big old three-story brick house was being used by one McCailister or another. Kevin had counted fifteen of them—seven in his family and six in his Uncle Frank's family, and two cousins. And at the moment none of them wanted Kevin around because they were too busy packing clothes and wrapping gifts. Tomorrow morning they were all flying to France to spend Christmas in Paris.

"Hey, Kevin!" he heard Uncle Frank shout from the study. Frank and his family had arrived from Ohio that afternoon.

"What?" Kevin shouted back.

"Come help me with. this VCR," Frank shouted.

Kevin wasn't sure he wanted to. Uncle Frank was the bald, chubby brother of Kevin's father, Peter McCallister. Sometimes Uncle Frank picked on Kevin. Still, Kevin had nothing better to do.

He went into the study and found Frank hunched over the VCR. Kevin's cousins Tracy and Heather were sitting on the couch, Tracy was Frank's daughter. She was blonde and had braces. Heather had brown hair and wore a Northwestern University sweatshirt. Her father and mother had moved to Paris the previous summer, which was why everyone was going there for Christmas. Tracy and Heather were

Kevin quickly identified the problem with the VCR. "You've messed up all the channels, Uncle Frank. How come you don't know how to use a VCR?"

Tracy and Heather giggled. Uncle Frank glanced at the girls and then turned back to Kevin.

"How come you don't know how to drive?" he asked back.

"Think you're pretty smart for a seven-year-old, don't you?" he muttered. "Just get this to work, okay?"

Kevin turned the VCR and the TV back to the right channels and a movie went on. It was an old black-and-white gangster movie Uncle Frank had brought. Uncle Frank settled back into the sofa with the girls. Kevin started to leave, but then stopped behind the sofa. He'd never seen black-and-white TV before.

"Why did they make movies in black and white?" he asked.

"I said get out of here!" Uncle Frank yelled.

The McCallister house was on a quiet street lined with tall old trees in the fancy Chicago suburb of Oak Park. The people who lived there tended to be well-off. They liked to travel during holidays like Christmas. The two crooks who sat in the dark van across from the McCallister house were Counting on it.

"Just think," said Marv Murchens, gazing at the houses glimmering with colorful Christmas lights. "By tomorrow afternoon almost everyone on this block should be away." Marv was a tall, lanky man with a scruffy beard and a confused look on his face.

His partner, Harry Lyme, smiled and his gold tooth glinted. Harry was a short, heavyset man with cropped black hair and a mean scowl.

"See that house there?" Harry pointed at the McCallister house. "That's the one I really want. I bet it's loaded."

"You sure they're goin' away?" Marv asked.

"We better make sure," Harry said. He got up and went into the back of the van to change clothes.

"Yeah," Marv said. "No sense robbing the place if the people are home."

Back in the McCallister house, Kevin's mother Kate was in her bedroom, talking on the phone to her office while she packed a suitcase. With her dark wavy hair, black business suit, and glittering jewelry, she looked like a character from
Dynasty
. But then, she was a clothes designer and worked in the fashion business.

"I don't want any calls while I'm away," Kate was saying. "I'm not going to France so I can spend the holidays on the phone."

Kevin ran into the room. He knew his mother hated to be interrupted while she was on the phone, but he was mad at her because she hadn't taken him to Santa's Village that day to see Santa Claus. Besides, this was more important than some dumb phone call.

"Uncle Frank won't let me watch the movie," he shouted. "If the big kids can, why can't I?"

"Shush," Kate said. Then to the phone she said, "We put Ralphy in the kennel . . . what? No, Ralphy's the dog. I gave them the office number in case there's a problem."

Kate put her hand over the phone. "If Frank said no, I say no."

"That's not fair," Kevin shouted, but his mother ignored him. Kevin saw that her dresses were laid out on the bed, waiting to be packed for the trip. He flopped down on the bed.

Kevin slid off the bed, making sure a few of his mom's dresses slid onto the floor, too. Kate's eyes widened with anger.

"Get out of here!" she shouted.

"Hang up the phone and make me," Kevin shouted back.

In the middle of this, Kevin's father Peter stepped out of the bathroom. He was a handsome man. with short black hair. He'd just come home from the office, and was still wearing his business shirt and tie.

"I didn't have time to pick one up," Kate replied. "And I wish everyone would stop interrupting me when I'm on the phone."

"How am I gonna shave in France?" Peter asked.

Kate didn't answer. Kevin headed for his father. If he Couldn't get his mother to say yes, maybe his dad would.

"I'll let you do something," his father said. "Go pick up your Micromachines. Aunt Leslie stepped on one and nearly broke her neck."

"And I found him in the workroom before, fooling around with the blowtorch," Kate said from across the room.

Squealer, Kevin thought. Suddenly he decided it was time to leave.

"Wait a minute," his dad said sternly. "What have I told you about that? That torch is for grown-ups only. Never, ever play around with it."

"But Buzz showed me how," Kevin said. Before his father could reply, Aunt Leslie came in. She was Uncle Frank's wife and chubby like him. She talked with a real squeaky voice.

"How come Uncle Frank won't let me—" Kevin began to ask, but Aunt Leslie held up her hand.

"In a minute, Kevin," she squeaked.

"Kevin!" Peter shouted, glaring at his son. "Out! Right now!"

Kevin stuck out his tongue and left.

Harry Lyme stepped onto the McCallisters' front porch and rang the doorbell. The policeman's uniform he'd rented from the costume shop was tight around the neck and too short in the arms.

A blonde girl about fourteen years old opened the door. "Can I help you?" she asked.

"Yes, are your parents home?" Harry said, stepping into the foyer.

Just then Heather passed by, lugging a suitcase.

"Buzz did," Tracy answered. "By the way, my dad said an American hair dryer won't work in France. Is that true?"

France, thought Harry with a smile.

"You need a voltage adaptor," Heather told her.

"Excuse me," Harry said to Heather. "Are your parents here?"

"My parents live in Paris," Heather said. Now a younger girl with glasses joined them.

Big family, Harry thought, imagining all the TVs they must have.

"Hi," Harry said to Sondra, "are your parents home?"

"Do they live here?" Harry asked.

"If you'll wait here a minute I'll try to find someone," Heather told Harry. Then she, Tracy and Sondra left.

Harry looked around at the expensive-looking furniture in the living room. He could almost bet the cabinet in the dining room was filled with sterling silver and valuable china. Harry grinned. This was going to be a great house to rob.

Kevin stood in front of the upstairs hallway closet and stared up at the suitcase on the top shelf. He was supposed to pack for this dumb trip to France, but there was no way he could reach his suitcase.

Just then his sister Megan came by. Megan had curly brown hair and spent a lot of time in the bathroom. She was a teenager, and considerably taller than he.

"Get it yourself," said Megan. "I have to use the bathroom."

Kevin went into the room he shared with his brother Jeff, who was nine, and wasn't a teenager but looked and acted like he was. Jeff even lifted weights, At that moment he was lifting a big green duffle bag.

"There, I'm packed," Jeff said proudly. "Have you packed?"

"I can't reach my suitcase," Kevin said. "And even if I could, I don't know how to pack. I've never done it in my whole life."

"You've never done anything in your life," Jeff sneered. "Except play piano . . . badly."

"What did I say?" asked Megan as she passed on her way back from the bathroom.

"The dope was whining about a suitcase," Megan said. "What am I supposed to do? Shake his hand and say, 'Congratulations, You're an idiot?' "

"I'm not an idiot!" Kevin shouted.

"Oh, really," Megan said with a laugh. "You're completely helpless. Everybody has to do everything for you."

"Do you know what I should pack?" Kevin asked her.

"Didn't Buzz tell you, cheekface?" Jeff said as he lugged his duffle bag out of the room. "Toilet paper and water."

As soon as Jeff left the room, Kevin stuck his tongue out at him.

"Don't worry." Linnie patted Kevin on the head. "You know Mom's going to pack your stuff. You're what the French call
les incompetent
."

"You know you have to sleep on the hide-a-bed with Fuller tonight," Linnie said.

"Why?" Kevin asked. Fuller was Kevin's five-year-old cousin. He wasn't a teenager, but he was Uncle Frank's kid so he didn't count.

"Heather, Tracy and Sondra have to sleep in your room," Linnie said. "Don't forget. If Fuller has a Pepsi he wets his bed."

Kevin clenched his fist.
This was the final humiliation!
Not 0nly did they treat him worse than Ralphy the dog, but they were taking his room away and making him sleep with a bed wetter!

"This house is so full of people, it makes me sick," Kevin shouted. "When I grow up and get married, I'm living alone!"

Harry Lyme was still standing in the foyer in his phony police uniform. Twenty-five minutes had passed. By now he'd surveyed everything and figured the take on this place would be in the thousands of dollars. If only he could find out when, and if, everyone was going to France.

The doorbell rang. From upstairs someone yelled, "Get the door!" Harry was the only one close to the door so he figured that meant him. He. opened it. A Little Nero's Pizza delivery boy came in trying to balance a huge stack of pizza boxes.