Read Home to Me (The Andrades, Book 2) Online 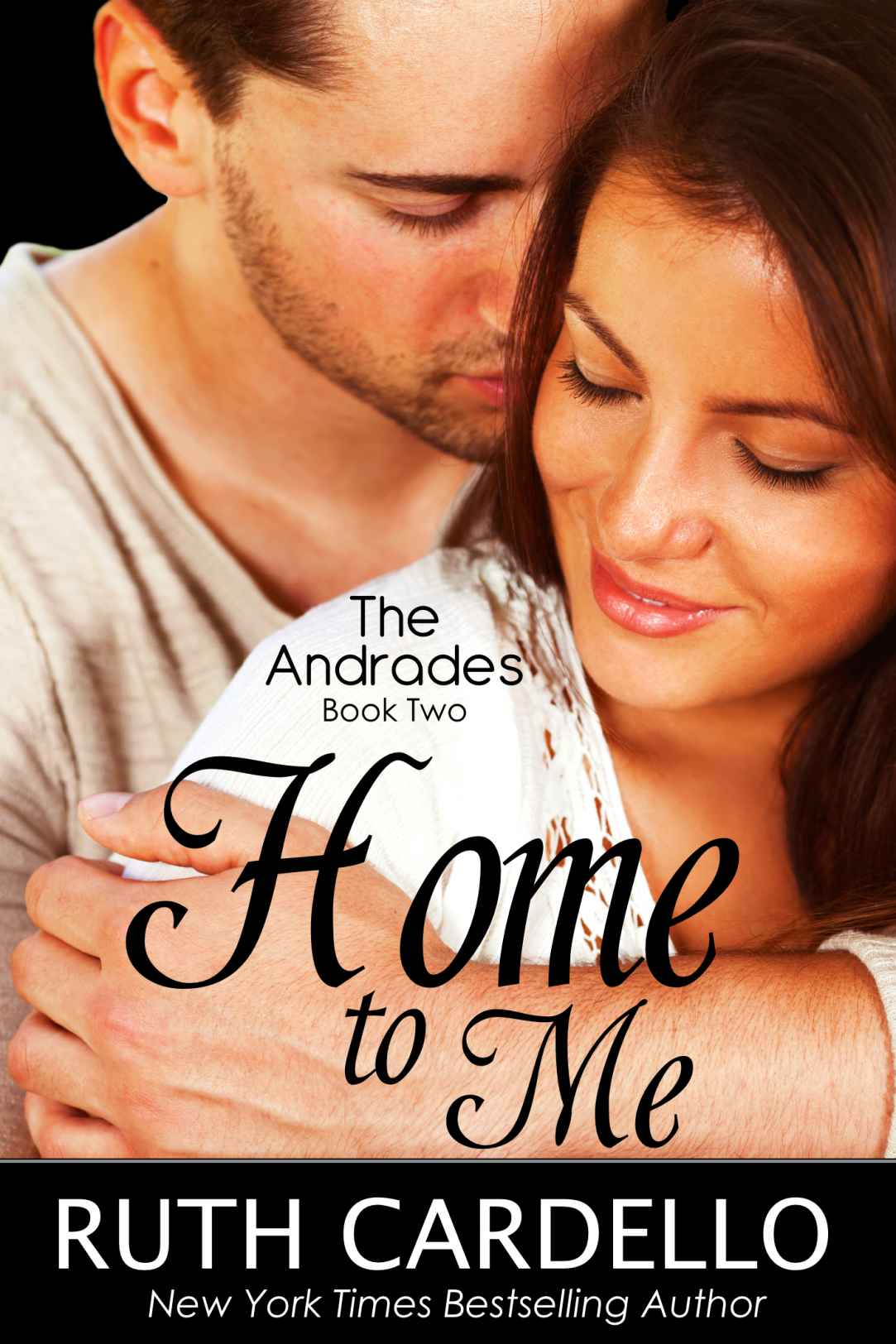 Sexy, charming, bad boy. He’s never been a one woman man, but he’s willing to give it a try every Saturday with Rena.

Confident, caring, a woman who plays by the rules. She’s never been in love, and thinks keeping sex with Nick contained to one day a week will protect her heart.

She’s the only woman he’d consider reforming for.

When their relationship is exposed and they must defend it, will these two lovers discover that home is in each other’s arms?

Home To Me
copyright 2014 by Ruth Cardello

An original work of Ruth Cardello.

All Rights Reserved.  No part of this book may be used or reproduced in any manner whatsoever without written permission from the author, except in the case of brief quotations embodied in critical articles and reviews.

This book is a work of fiction.  The names, characters, places, and incidents are products of the writer’s imagination.  Any resemblance to actual persons, places, events, business establishments or locales is entirely coincidental.

To my husband, Tony, and my three amazing children.

No matter where we live, or how far we roam, you will always be HOME TO ME.

Other Books by Ruth

Excerpt from
Maid for the Billionaire, Book 1 of the Legacy Collection

“You can’t stop me—don’t get hurt trying to,” Nick Andrade warned as he moved to sidestep Rena, his brother’s secretary, for a second time.

Her chest bounced beneath her thin silk blouse and her hands went angrily to her hips, momentarily distracting Nick. Rena had always been a twelve on his one-to-ten scale. He preferred blondes as a general rule, but she was his exception. “I’m not letting you by. Gio is on an important international call.”

“That’s exactly why you’re staying out here with me.”

As she blocked him, daring him to test her resolve, he felt his blood rush downward and was reminded why she was trouble and always had been.

Too vividly, he recalled another day when a younger Rena had stood before him in almost exactly the same pose. Gio had just started working full-time at his family’s oil company, Cogent, and he had asked Nick to pick up papers from his friend Kane. Nick had agreed even though it was a long drive. He’d only been home for a day and had already had a row with his mother, so any excuse to get out, even going to Sag Harbor, had been a welcome reprieve.

Rena had opened the door to her family’s home dressed in shorts and T-shirt emblazoned with her college’s name, taken one look at him, put her hands on her hips, and said, “Nick, I’m surprised you’re still alive.”

Her shirt had hugged her young breasts, and the long expanse of thigh exposed by her shorts had temporarily wiped all sense from his head. Yep, trouble. She was Kane’s little sister—even called herself an honorary Andrade because of all the time she’d spent with them while growing up.

Practically part of the family.

“Rena, a pleasure to see you, as always. Gio asked me to pick up a folder.”

Rena had nodded. “Kane said he left something in the den in case you came by. Would you like to come in?”

He’d shaken his head. He’d never liked being at the Sander’s house. Gio had spent most of his vacations there, but Nick would rather have had needles stuck beneath his fingernails than spend five minutes with Rena’s parents. They were always smiling, always asking about things that were none of their business, and offering advice when it was clearly not requested or welcome.

Gio had claimed they did it because they cared. Nick had seen it as a genetic defect, and one they had passed down to their children.

“I’ll wait here,” Nick had answered and leaned against the doorjamb.

“Suit yourself,” she’d said and walked back into the house. When she’d returned she’d held up the folder but hadn’t immediately handed it over to him. “Gio was upset when he saw the photos of you and your friends jumping out of that helicopter to ski in Vail.”

“He worries about you. He thinks you’re going to get yourself killed with one of your stunts. I think so, too.”

Nick had snatched the folder easily out of Rena’s hand. “It’s called having fun, Rena. You should try it sometime. Oh, wait, Mommy and Daddy would never give you permission, would they?”

“My parents would support whatever I wanted to do.”

With a whistle, Nick had mocked her. “Then come to Martha’s Vineyard with me this weekend. I just got my pilot’s license. I’m flying a bunch of friends up to our beach house. Even Stephan is coming. It’s going to be wild.”

“I’m sure you could blow off studying this one time and still pass your classes.”

“I probably could, but I’m not going to.”

“Why bother when a job will be handed to you as soon as you graduate?”

“My grades are important to me.”

“You mean, they’re important to your parents.”

Rena’s face had reddened and she’d spat, “Fuck you.”

He’s tossed her a lopsided grin. “Thanks for the offer, but I don’t do virgins.”

“You’re such an asshole, Nick.”

Nick had waved the folder, chuckled, and said, “It’s what the ladies love about me.”

Rena had turned and slammed the door in a glorious huff, leaving Nick standing outside, shaking his head in bemusement. He loved the wild look in her eyes when her temper flared, and that he was the only one who could make her that angry. She was innocence and fire, and he’d spent many nights wanting to intimately explore both sides of her.

He’d never pursued her, though. She’d started working for Gio after college, and he’d promised his brother he’d stay away from her. He couldn’t forget her, though, as hard as he tried. Shit, she even sent him a card for his birthday every year.

Lately it was the only one he received. He’d never thanked her for any of them. Honestly, he half hoped each year would be the last year he’d get one, but they kept coming. They made him angry for reasons he couldn’t fully understand. Who the hell takes the time to remember an adult’s birthday?

She’d taken the “nice girl next door” act too far. All her boyfriends were educated, well dressed, and boring as hell. She was, too, when she was with them. He’d bet none of them knew Rena was a sucker for a dare, or that she ate before she went out because she wanted to appear satisfied by a salad.

They might not know her quirks, but they’d experienced something he hadn’t—the taste of those lips. They knew the way she moaned when she was just about to come. With his heart beating wildly in his chest and adrenaline rushing through his veins, Nick allowed himself the luxury of imagining how she would look in his bed after hours of being fucked.

He met her eyes and came crashing back to the present.
What the hell am I doing?
He’d come to confront his brother, and doing so while sporting a hard-on was not in his plans. “Gio needs to hear what I have to say. It’s a hell of a lot more important than whatever he’s doing, which I’m sure is promising to blow whoever’s on that call to land his latest deal.”

“Are you drunk?” Rena asked, her forehead creasing with concern.

“No,” he said impatiently.
Just an idiot who needs to ignore how tightly your skirt is hugging your beautiful ass.

She leaned in and sniffed. He knew that concerned look well. He could have told her he’d stopped drinking completely when he’d returned from his cousin’s wedding, but he didn’t explain himself to anyone. “Get out of my way.”

Her chin raised a notch and her eyes narrowed. “No.”

Nick had never touched a woman out of anger, and he never would. Still, her show of loyalty to his brother fueled his anger. He knew one method that would get her to retreat and he wasn’t above using it. He gave her a blatant, appreciative once-over and wiggled his eyebrows suggestively. “I can think of something that would stop me.”

She flipped her hair over one shoulder and shook her head. “You’re trying to make me angry.”

Nick stepped closer to her. “Anger isn’t what I’d make you feel.” He ran a finger lightly down her tense jaw and over the wild pulse in her neck. Instead of turning tail and running, she held his eyes, and Nick inhaled harshly. The air between them throbbed with a desire that neither would admit to. Her eyes dilated, and her lips parted just enough that he could imagine slipping his tongue between them and tasting her.

She bit her lower lip gently between her teeth. He groaned audibly and stepped closer, his mouth hovering above hers. For no more than a heartbeat or two, he forgot why he’d initiated this exchange. He was just a man who was about to kiss a woman he wanted, one he’d denied himself for as long as he could remember.

The door behind her flew open. “What are you doing here, Nick?”

Rena’s eyes searched his in confusion. Then she looked away, a slight blush spreading across her cheeks. Nick raised his head and squared his shoulders. “We need to talk, Gio.”

“No,” Gio said in an irritatingly authoritative tone.

“Wise choice,” Nick said over Rena’s head. “You won’t want him to hear what I have to say.”

Gio raised one mocking eyebrow, then motioned for Nick to come into his office. Anger rushed through Nick.
He doesn’t take me seriously. He never has. That is about to change.

Rena put a hand on Nick’s arm when he moved to step around her. The light touch was fire on his skin, painful and pleasurable at the same time. In a volume so low only he would hear her words, she said, “Whatever happened, don’t let it come between you. You’re family. There is nothing more important than that.”

“You don’t know what this is about.”

“Your concern for him is touching.” Nick stepped away from her and through the door his brother held open for him.

Just before the door closed, he thought he heard Rena whisper, “It’s not him I’m worried about.”

Rena Sander paced the carpeted floor in front of her desk. Nick Andrade knew exactly how to get her blood boiling. Yes, she found him attractive, but a woman would have to be dead not to. The Andrade men had all been blessed with good looks. Each had eyes as dark as coal and strong features that would have done any Roman statue proud. Well over six feet with a naturally muscular build, and consistently dressed in casual but expensive international designer clothing, Nick always looked like he’d just finished a cover shoot for
GQ.