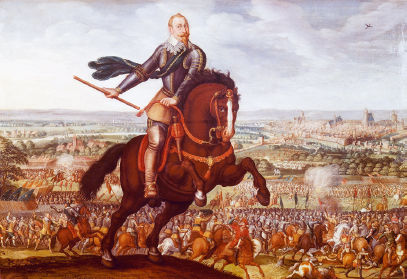 Jean-Jacques Walter,
Gustav Adolph of Sweden at the Battle of Breitenfeld
(1631).

Look, for example, at the painting above of the Battle of Breitenfeld, which took place on 17 September 1631. The painter, Jean-Jacques Walter, glorifies King Gustav Adolph of Sweden, who led his army that day to a decisive victory. Gustav Adolph towers over the battlefield as if he were some god of war. One gets the impression that the king controls the battle like a chess player moving pawns. The pawns themselves are mostly generic figures, or tiny dots in the background. Walter was not interested in how they felt while they charged, fled, killed or died. They are a faceless collective.

Even when painters focused on the battle itself, rather than on the commander, they still looked at it from above, and were far more concerned with collective manoeuvres than with personal feelings. Take, for example, Pieter Snayers’s painting of the Battle of White Mountain in November 1620.

The painting depicts a celebrated Catholic victory in the Thirty Years War over heretical Protestant rebels. Snayers wished to commemorate this victory by painstakingly recording the various
formations, manoeuvres and troop movements. You can easily tell the different units, their armament and their place within the order of battle. Snayers gave far less attention to the experiences and feelings of the common soldiers. Like Jean-Jacques Walter, he makes us observe the battle from the Olympian vantage point of gods and kings, and gives us the impression that war is a giant chess game. 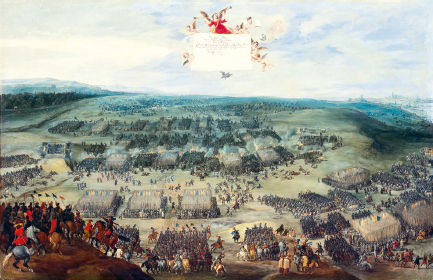 If you take a closer look – for which you might need a magnifying glass – you realise that
The Battle of White Mountain
is a bit more complex than a chess game. What at first sight seem to be geometrical abstractions turn upon closer inspection into bloody scenes of carnage. Here and there you can even spot the faces of individual soldiers running or fleeing, firing their guns or impaling an enemy on their pikes. However, these scenes receive their meaning from their place within the overall picture. When we see a cannonball smashing a soldier to bits, we understand it as part of the great Catholic victory. If the soldier is fighting on the Protestant side, his death is a just reward for rebellion and heresy. If the soldier is fighting in the Catholic army, his death is a noble sacrifice for a worthy cause. If we look up, we can see angels hovering high above the battlefield. They are holding a billboard which explains in Latin what happened in this battle, and why it was so important.
The message is that God helped Emperor Ferdinand II defeat his enemies on 8 November 1620.

For thousands of years, when people looked at war, they saw gods, emperors, generals and great heroes. But over the last two centuries, the kings and generals have been increasingly pushed to the side, and the limelight shifted onto the common soldier and his experiences. War novels such as
All Quiet on the Western Front
and war films such as
Platoon
begin with a young and naïve recruit, who knows little about himself and the world, but carries a heavy burden of hopes and illusions. He believes that war is glorious, our cause is just and the general is a genius. A few weeks of real war – of mud, and blood, and the smell of death – shatter his illusions one after another. If he survives, the naïve recruit will leave war as a much wiser man, who no longer believes the clichés and ideals peddled by teachers, film-makers and eloquent politicians.

Paradoxically, this narrative has become so influential that today it is told over and over again even by teachers, film-makers and eloquent politicians. ‘War is not what you see in the movies!’ warn Hollywood blockbusters such as
Apocalypse Now
,
Full Metal Jacket
and
Blackhawk Down
. Enshrined in celluloid, prose or poetry, the feelings of the ordinary grunt have become the ultimate authority on war, which everyone has learned to respect. As the joke goes, ‘How many Vietnam vets does it take to change a light bulb?’ ‘You wouldn’t know, you weren’t there.’
6

Painters too have lost interest in generals on horses and in tactical manoeuvres. Instead, they strive to depict how the common soldier feels. Look again at
The Battle of Breitenfeld
and
The Battle of White Mountain
. Now look at the following two pictures, considered masterpieces of twentieth-century war art:
The War
(
Der Krieg
) by Otto Dix, and
That 2,000 Yard Stare
by Tom Lea.

Dix served as a sergeant in the German army during the First World War. Lea covered the Battle of Peleliu Island in 1944 for
Life
magazine. Whereas Walter and Snayers viewed war as a military and political phenomenon, and wanted us to know what happened in particular battles, Dix and Lea view war as an emotional phenomenon, and want us to know how it feels. They don’t care about the genius of generals or about the tactical details of this or that battle. Dix’s soldier might be in Verdun or Ypres or the Somme – it doesn’t matter which, because war is hell everywhere. Lea’s soldier just happens to be an American GI in Peleliu, but you could see exactly the same 2,000-yard stare on the face of a Japanese soldier in Iwo Jima, a German soldier in Stalingrad or a British soldier in Dunkirk. 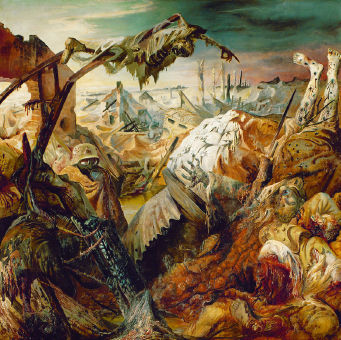 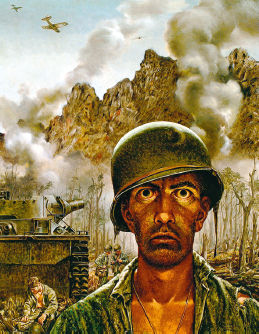 In the paintings of Dix and Lea, the meaning of war does not emanate from tactical movements or divine proclamations. If you want to understand war, don’t look up at the general on the hilltop, or at angels in the sky. Instead, look straight into the eyes of the common soldiers. In Lea’s painting, the gaping eyes of a traumatised soldier open a window onto the terrible truth of war. In Dix’s painting, the truth is so unbearable that it must be partly concealed behind a gas mask. No angels fly above the battlefield – only a rotting corpse, hanging from a ruined rafter and pointing an accusing finger.

Artists such as Dix and Lea thus overturned the traditional hierarchy of war. In earlier times wars could have been as horrific as in the twentieth century. However, even atrocious experiences were placed within a wider context that gave them positive meaning. War might be hell, but it was also the gateway to heaven. A Catholic soldier fighting at the Battle of White Mountain could say to himself: ‘True, I am suffering. But the Pope and the emperor say that we are fighting for a good cause, so my suffering is meaningful.’ Otto Dix employed an opposite kind of logic. He saw personal experience as the source of all meaning, hence his line of thinking said: ‘I am suffering – and this is bad – hence the whole war is bad. And if the kaiser and the clergy nevertheless support the war, they must be mistaken.’
7

So far we have discussed humanism as if it were a single coherent world view. In fact, humanism shared the fate of every successful religion, such as Christianity and Buddhism. As it spread and evolved, it fragmented into several conflicting sects. All humanist
sects believe that human experience is the supreme source of authority and meaning, yet they interpret human experience in different ways.

Humanism split into three main branches. The orthodox branch holds that each human being is a unique individual possessing a distinctive inner voice and a never-to-be-repeated string of experiences. Every human being is a singular ray of light, which illuminates the world from a different perspective, and which adds colour, depth and meaning to the universe. Hence we ought to give as much freedom as possible to every individual to experience the world, follow his or her inner voice and express his or her inner truth. Whether in politics, economics or art, individual free will should have far more weight than state interests or religious doctrines. The more liberty individuals enjoy, the more beautiful, rich and meaningful is the world. Due to this emphasis on liberty, the orthodox branch of humanism is known as ‘liberal humanism’ or simply as ‘liberalism’.
*

It is liberal politics that believes the voter knows best. Liberal art holds that beauty is in the eye of the beholder. Liberal economics maintains that the customer is always right. Liberal ethics advises us that if it feels good, we should go ahead and do it. Liberal education teaches us to think for ourselves, because we will find all the answers within us.

During the nineteenth and twentieth centuries, as humanism gained increasing social credibility and political power, it sprouted two very different offshoots: socialist humanism, which encompassed a plethora of socialist and communist movements, and evolutionary humanism, whose most famous advocates were the Nazis. Both offshoots agreed with liberalism that human experience is the ultimate source of meaning and authority. Neither believed in any transcendental power or divine law book. If, for example, you asked Karl Marx what was wrong with ten-year-olds working twelve-hour shifts in smoky factories, he would have answered that
it made the kids feel bad. We should avoid exploitation, oppression and inequality not because God said so, but because they make people miserable.

Rainy Day Dreams: 2 by Lori Copeland, Virginia Smith
After the Plague by T. C. Boyle
Seduction of the Minotaur by Anais Nin
The Escape by Kristabel Reed
Cry Me a River PG-13 Edition by Dawson, Devyn
The Murder on the Links by Agatha Christie
Bike Week Blues by Mary Clay
Dance of Shadows by Black, Yelena
Tex Times Ten by Tina Leonard
Red Sky At Morning - DK4 by Good, Melissa