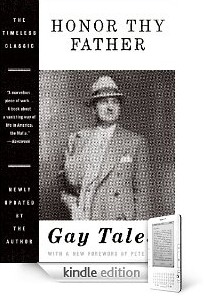 FOR
Charles, Joseph, Tory, and Felippa in the hope that they will understand their father more, and love him no less…

Part One
The Disappearance

Other Books by Gay Talese 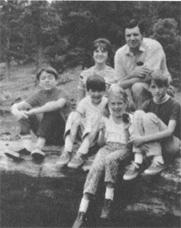 The Bonanno Family, 1970
Courtesy of the Bonanno family 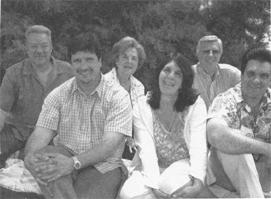 I
KNEW
G
AY
T
ALESE BEFORE
I
EVER MET HIM
. T
HE YEAR WAS
1958. I was twenty-three, living on the Lower East Side of Manhattan, employed as an advertising designer, and trying to teach myself to write.

This was not easy. I had taken a few courses in what was then called “English composition” while attending art school at Pratt Institute and in Mexico City, and I soon abandoned painting because the need to write stories kept getting in the way. Something in me demanded sequence and narrative, a primitive urge to say that this happened, and that happened, and
as a result
, still another event happened. My classrooms in this other art were the books of great writers. Taunted and inspired by Hemingway, Fitzgerald, John O’Hara, and others, I began writing my own imperfect stories on an old Royal typewriter. I even had a plan. In art school, a teacher named Burne Hogarth told us that there were four stages in every artist’s attempt at mastery: imitate, emulate, equal, surpass. I was still so young that I thought I could do the same with writing.

At the same time, I was reading about six newspapers a day, devouring them for information, news, fight results (for I was an avid boxing fan), comic strips, and political opinions. I loved the work of Murray Kempton (even when I did not understand it), Jimmy Cannon, Red Smith, Frank Graham, Dave Anderson. In magazines I soaked up the work of W. C. Heinz and A. J. Liebling.

In early 1958, I became friends with a wonderful young middleweight named Jose (Chegui) Torres. He trained in the Gramercy Gym on Fourteenth Street, five blocks from where I was living. As a fighter, Jose was a terrific puncher, with blurring hand speed, superb defense, and high ring intelligence. He was funny, too, in English and Spanish, laughing at his own jokes, occasionally bursting into song. One late afternoon, I walked up the two flights to the Gramercy, and went in. The gym was packed. Jose abandoned the speed bag and hurried to me.

“The story about
me
!” No, I said. Jose turned and hurried into the small office where his manager, Cus D’Amato, sometimes slept on a cot, with a German shepherd as protection against enemies, real and imagined. Then he came back waving a folded section of
The New York Times
in a gloved hand.

So it was. An elegantly written portrait of a young fighter, full of exact details about where he lived in Brooklyn, and how he trained, and what he was like in the prize ring. Jose’s name wasn’t mentioned until the last paragraph.

The piece was written by Gay Talese.

After that, I began looking in the
Times
for new stories by this fellow Talese and was always impressed. He wrote in a deceptively simple style that reminded me in some way of the Latin prose I had studied in high school. The sentences were classically designed, made of concrete nouns and active verbs. They seemed always to end with a hard word, so that a period was not even necessary. Long sentences alternated with short blunt sentences. The effect was sometimes lyrical, tempered by subtle ironies. The paragraphs were as solid as good brickwork. Those smooth paragraphs reminded me of the short stories of Irwin Shaw.

But even in the tight, confined spaces of a daily newspaper, the surface style always was rooted in Talese’s reporting. He knew how to take a reader into a place, revealing what it looked like, and smelled like, where the light came from, and what made up the sound track. He was aware of the way clothes could convey class and taste. The quotes were also used with precision, at once revealing character and moving the story forward. These early pieces for the
Times
were sketches by a fine draftsman. Later, in his full-length magazine articles and in his books, the work attained the depth and elegance of full-scale paintings.

In 1958, Talese was twenty-six years old. He was born in Ocean City, New Jersey, just south of Atlantic City. His father was a tailor, and the Taleses were one of the few Italian American families among many Irish Americans. He was a shy, wary kid in school and, by his own account, a poor student. But he was learning to observe the world, to read it for signs of danger or the presence of social slights. In high school, he found his way to the school newspaper, which gave him his life. Some lessons taught by the example of his father remained with him for all the years that followed. Gay Talese (named for his stonemason grandfather, Gaetano) would write the best-tailored prose of his generation of journalists.

The Ivy League was beyond him, in those days still rheumy with nasty strains of anti-Italian class prejudice. Talese ended up far from home, at the University of Alabama. There he majored in journalism, with growing ambitions to make his nonfiction as vital and deep as great works of the imagination. Like all of us, he was reading Hemingway, Fitzgerald, O’Hara, and (yes, I learned later) Irwin Shaw. They had many lessons to teach.

After graduating in 1953, Talese landed a job as a copy boy at
The New York Times
. He managed to have several pieces published in the
Times
, and then was called up by the U.S. Army. The Korean War had ended in a cease-fire, but while in the university, Talese was a member of the ROTC. Now they came knocking at his door. Off he went, to serve as a public information office at Fort Knox, Kentucky, longing to return to
The New York Times
. For any writer, boredom has its uses. He continued reading, writing, and imagining. When he returned to the
Times
in 1956, he was bursting with energy and journalistic visions. Literature had taught him that ordinary lives could be as dense, complicated, even heroic as those of people who ended up as statues in parks. He wanted to be their chronicler.

The path he followed at the
Times
led him into sports, with a focus on boxing. The prize ring offered primordial drama, one man against another, where the difference between triumph and defeat was often determined by will. Even in those days, when
The New York Times
was a rigidly edited, calcified newspaper, it was possible in sports to write more freely. That’s why they called it sportswriting. Talese began to excel at the craft, while embracing one huge lesson that he had already sensed: the best stories were usually in the losers’ dressing rooms.

At the same time, he was trying to write stories about ordinary people, many of whom were glibly dismissed as “losers.” At the
Times
, too many of those stories ended up on “the spike,” literally a spike soldered into a flat slab of metal and placed on an editor’s desk. It was the ultimate destination for rejected stories. Talese kept copies of his own rejected stories, reworked them, and started assembling his first book:
New York: A Serendipiter’s Journey
. Here were glimpses into the lives of people you might pass in the streets, or who were sitting beside you on the subway, or working at mean jobs far from the bright lights of Broadway. That first book (with photographs by Marvin Lichtner) was published in 1961, and the lyrical opening section was the first piece of writing by Talese to appear in
Esquire
. It would not be his last.

In the summer of that same year, I went to work for
The New York Post
, and my life had truly begun. While serving an apprenticeship covering fires and murders, I was happier than I had ever been. Among Hogarth’s laws of mastery, I didn’t have time for the first stage: imitation. But I was a compendium of all I had read and admired, along with the commandments of some tough old tabloid editors. In the fall, I received two enormous gifts: my first byline, and my first working press card.

And in the Gramercy Gym one afternoon, I met Gay Talese.

He was dressed, of course, in a perfectly cut suit and tie, highly polished shoes, a coat draped over his forearm. Jose Torres introduced us, and Talese smiled, and said something nice about a story I’d written the week before. I told him how much I admired his work. He shrugged and smiled in a modest way. The gym was noisy with shouts, and grunts, and a trainer yelling, “chin down, chin down.” Talese turned for a moment to the ring, where two welterweights moved fiercely against each other, their faces masked in thick headgear. His face went blank for a beat, as if he were recording what he was seeing. Then he turned back to me.

“I hope you’re having fun down there,” he said, meaning the
Post
.

“Sometimes, that’s all you need,” he said, in that year before the Beatles. And I would discover that he was right.

Across the decades that followed, we remained friends. To be sure, we weren’t close; I was a downtown type, out of the bohemian tradition of the newspaper craft; Talese was more uptown. We met covering fights, or in restaurants, or at occasional parties. But I never lost my admiration for his adherence to the highest principles of the reporter’s craft, his insistence on going beyond the surface, the quick hit, the glib assumption. He is doing that as I write.

This book—originally published in 1971—is only one example among many of the refusal of Gay Talese to take his discovered truths off the rack. He sets aside all the melodramatic temptations of the literature of the Mafia, and sees his cast as subjects, not objects. They exist in his pages as human beings, one at a time, not as cartoons. Talese understands, as all good reporters do, that you can never be certain about the truth. Human beings lie. They offer alibis. At their best, they plead “guilty with an explanation.” At their worst, they blame others. In the world of the Bonannos, they usually say nothing at all.

Talese somehow managed to gain access to that world, to write about it with a certain degree of empathy, free of prosecutorial zeal. He is not exactly counsel for the defense, but by refusing moral certainty, he tells us more about that world than we knew before he published this book, and more than we have learned since then. It is an essential document in the project of understanding the American twentieth century. And it is more. Reading it again, I was reminded of the words of the splendid Italian writer Italo Calvino: “Every rereading of a classic is as much a voyage of discovery as the first reading.”

By that test,
Honor Thy Father
is a classic. With any luck, my ten-year-old grandson will read it when Talese and I are both long gone. If he does, I hope he will understand how much his grandfather cherished the work of this fellow Talese, and the pleasure of his company.

JOSH by DELORES FOSSEN
Organized for Murder by Ritter Ames
The Last Word by Lisa Lutz
A Bride for Kolovsky by Carol Marinelli
Reel Life Starring Us by Lisa Greenwald
Impulse by Vanessa Garden
Out of the Blue: Six Non-Medication Ways to Relieve Depression (Norton Professional Books) by Bill O'Hanlon
Secrets of a Summer Night (Stone Gap Mountain) by Stockham, Kay
The Great Altruist by Z. D. Robinson
Connections of the Mind by Dowell, Roseanne