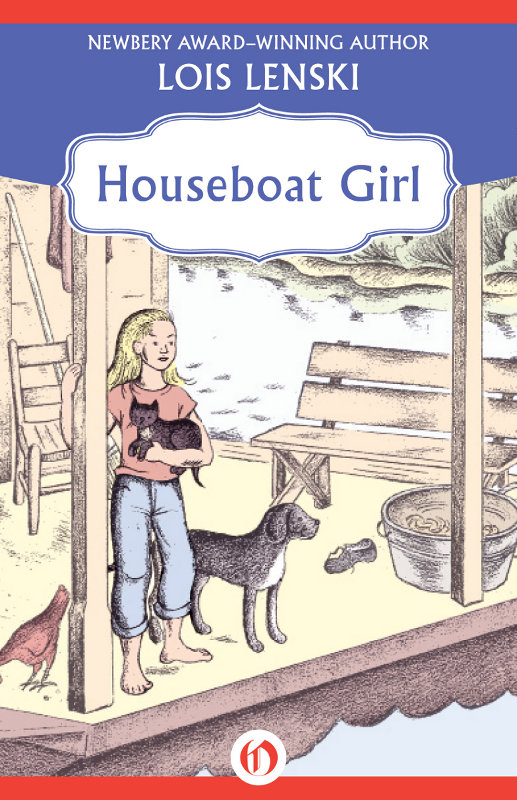 For my beloved river children

c
hute
—a channel at the side of a river, or a narrow waterway between an island and the shore.

johnboat
—a square-ended, flat-bottomed river skiff, propelled by either oars or an outboard motor, well-adapted to use on slow-moving rivers and sheltered lakes.

revetment—
a river bank paved with asphalt to prevent erosion.

seine
—a large net, one edge provided with sinkers and the other with floats s
tage plank—
a long board from a houseboat to the shore—a gangplank.

towhead—
a low alluvial island or shoal in a river with clusters of cottonwood trees.

Excerpt from
Journey Into Childhood
, an Autobiography by Lois Lenski

CHAPTER 2 Down The River

CHAPTER 4 On The River Again

CHAPTER 5 Still On The River

CHAPTER 8 A Visit To The Store

CHAPTER 9 To Go Or Stay

CHAPTER 10 A Trip To Town

CHAPTER 11 A House For Patsy

A Biography of Lois Lenski

Excerpt from
Journey Into Childhood
, an Autobiography by Lois Lenski

T
HE BIG EVENT OF THE
1940s was the award of the Newbery Medal to
Strawberry Girl
in 1946. No one was more astonished than I to receive it. Had it been given to my book
Indian Captive, the Story of Mary Jemison
, which I considered my major and most scholarly work, I would not have been surprised. I had envisioned a series of Regional books, for I knew there were many regions little known and neglected in children’s books. The series was barely started, and I had already daringly broken down a few unwritten taboos, I had written more plainly and realistically than other children’s authors, I had taken my material and my characters direct from real life instead of from the imagination, and my Regionals were not yet entirely accepted or approved. I was an innovator and a pioneer in a new direction, and I knew I had a long and difficult task ahead to earn the acceptance which I was not expecting so soon. But the award focused national attention on
Strawberry Girl
and the books to follow, so I was very grateful.

The convention of the American Library Association was held at Buffalo that year, and at various meetings and receptions, I received invitations from librarians to go to many parts of the country—Seattle, Utah, California, Kansas, Texas, Oklahoma, Minnesota—to write about their region. Afterwards, the award brought much publicity, including requests for personal interviews and radio appearances, for personal appearances at libraries and schools, most of which I was unable to accept. Those that I did accept were strenuous and wearing, and I was glad when the flurry subsided, and I could retire to private life again.

An entire book could be written about my experiences in other regions during the 1950s—in San Angelo, Texas, for
Texas Tomboy
, in Perry, Oklahoma, for
Boom Town Boy
, in McLaughlin, South Dakota, for
Prairie School
, in Remsen, Iowa, for
Corn Farm Boy
, and other places. The list goes on and on, always a new environment and way of life to be studied, and always good people who shared the intimacy of their lives with me, each region more exciting and stimulating than the last, each region calling for one’s deepest powers of observation, understanding, and compassion.

As soon as I return from a region, I have a big job to do. I have to copy all the notes I have taken, classifying them under various headings, making them readily and quickly accessible. Then I make an outline for my story, listing the various incidents I wish to include under the different chapter headings. I write my text in longhand first, and often revise it in longhand, then revise again as I type it. (The subject has, of course, been approved by the editor in advance.) I send the typed manuscript in, to be read and approved, copyedited (improving or disapproving of my punctuation!) and sent to the printer to be set into type. If any changes are suggested by the editor, the manuscript or portions of it may be returned to me for this purpose. If any changes in format are contemplated, I am always consulted. For many years, with Lippincott, I worked directly with the head of the manufacturing department in planning all details of type and format. It was in this way that a beautiful format was devised for the Regionals.

While the manuscript is at the printers, while I am waiting for the galley proofs, having kept a carbon of the manuscript, I am working on the illustrations. For the Regionals, these are graphite pencil drawings on 3-ply Bristol board, and are reproduced by high-light halftone offset. The drawings for the Roundabouts are ink drawings, reproduced by letterpress.

When the galley proofs reach me, two sets are sent, one for me to read and correct, and to answer editorial or printers’ queries; the other set for me to cut up and paste into a blank dummy, allowing space on the proper page for each illustration, of which I usually make about fifty.

After I wrap up a large package containing original manuscript, the original illustrations, corrected galley proofs, and the printer’s dummy and ship it to the publishers, my work on a book is finished. The rest is up to the publisher. I see and hear nothing more until months later, when a book package arrives out of the blue, containing the first copy, hot off the press, for me to hold in my hands and marvel at. There is no other thrill so great for an author-illustrator as seeing the first copy of a book he has labored over and believed in and deeply loved.

From
Journey Into Childhood
by Lois Lenski © 1972 by permission of Sterling Lord Literistic for the Lois Lenski Covey Foundation, Inc.

A
RIVER IS AN
invitation. Since the beginning of time, it has always drawn men to its waters.

To the great Mississippi and its tributaries, they have come for many reasons—to explore it as conquest, to find a market for their products, for cheap and convenient transportation, or for pure love of the river itself. The pull of the river is a mighty one and has attracted all sorts and conditions of men—explorers, raft and keelboatmen, steamboat and packet boatmen, deckhands and sea captains, wanderers, adventuresome sportsmen, criminals and gamblers. Fugitives from the law gave the river people a bad name at a time when many river towns were outside the reach of the law. Fortunately, with better policing of our waterways at present, the river is no longer a convenient hideout for lawbreakers.

Last but not least, the river has always attracted the family man, who makes his living from the river itself. He traveled—and still travels—in a floating house, drifting lazily on the current or using motorboats to shove in and out of tight places. He usually sells his houseboat down river, and if he returns to the north, uses other means of transportation.

The “shantyboater” takes with him his wife and children, his cats, dogs and chickens, his fish boxes, boats, nets and fishing gear. He is a simple but colorful type, a man of character and courage. He knows the pull of the river, he meets its challenge for he is no weakling, and his love for it is so great that he is never happy to be away from it for long.

Such a man is Henry Story. He and his wife, Lou Story, are river people “by birth, ancestry and inclination” and have brought up their children, Peggy, Irene, Pete and Debbie, on the river between Paducah and Memphis, having made fifteen or more trips between these two places. When Harlan Hubbard drifted down the Mississippi River in 1949, he met them in their houseboat in Nonconnah Creek below Memphis, and he told of this meeting in his book
Shantyboat
. Through Mr. Hubbard’s introduction and with his help, I was able to locate the Story family at O’Donald Bend, near Luxora, Arkansas, in the summer of 1954. They were in a newer and larger houseboat than the one at Nonconnah Creek, the children had grown, were as much at home on the river as ever, and I found them a perfect “story family.”

For a period of six weeks I stayed in Luxora and was able to see them almost daily on their houseboat. I ate meals with the family, went out on the river with the children in their johnboats, took notes and made many sketches, helped to sell fish to the cotton pickers, and learned by firsthand experience all the intricacies of trotline and hoop-net fishing. Not the least of my pleasure in this family was learning and sharing their river philosophy and sensing their happiness and satisfaction in the river as a way of life. By contrast with the increasing commercialization, conventionalism and standardization of our average American way of living, theirs seemed to offer a singularly fresh and wholesome approach, a nearness to the world of nature, and a sense of true freedom and independence of spirit not quite possible on land. I learned not only to know the Story family, but to love and admire them as well.

With a few exceptions, life on the river since the days of Mark Twain has been ignored in literature to its great loss. The river is as much an environment as mountain, prairie, plain, swamp or woodland. It controls the life of the people who travel on it and of those who live on its banks and of all those who love it because they have “the river in their blood.” A fine river tradition has grown up to enrich our American heritage, and it is as alive today as it was yesterday, for it is being preserved for us by those rugged wholesome people who have deliberately preferred it and its vagaries to any other way of life, even though its monetary rewards are negligible. To them goes my highest admiration and regard.

It has been a privilege and a rare pleasure to write of the river people and to tell how they live for the benefit of the many who do not know them. The river children have been ignored and neglected, even though they live dramatic, vivid, if not dangerous lives. I have found them daring and courageous, resourceful and independent, poor perhaps in this world’s goods, but sweet, lovable and good.

To the Henry Story family and to Harlan and Anna Hubbard, and to my many friends in Luxora and Osceola, Arkansas, go my sincere thanks for the help they gave me in making this book possible.