Read I Am the Chosen King Online

I Am the Chosen King 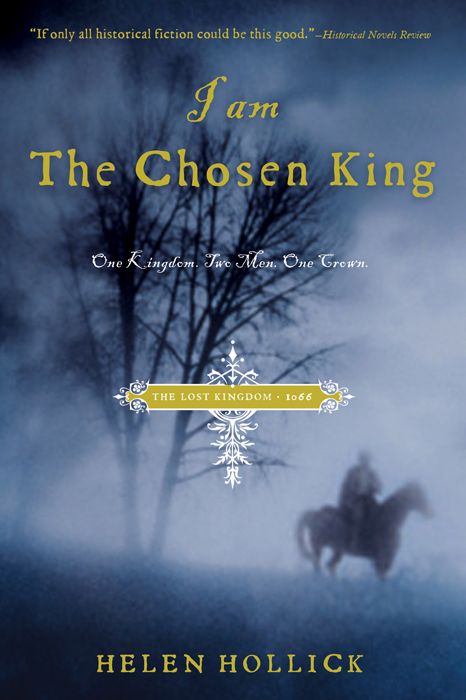 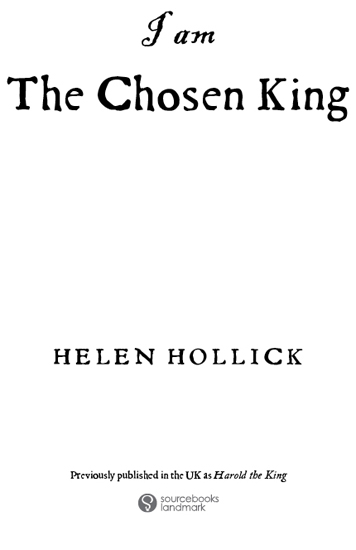 The characters and events portrayed in this book are fictitious and used fictitiously. Apart from well-known historical figures, any similarity to real persons, living or dead, is purely coincidental and not intended by the author.

Originally published as
Harold the King
in the UK by William Heinemann in 2000.

I am the chosen king / by Helen Hollick.

Author Elizabeth Chadwick has been a staunch friend, and Sharon Kay Penman an encouraging ally throughout my writing career. I am indebted to both of them.

My gratitude to the entire team at Sourcebooks—Shana, Danielle—and Dominque Raccah for their enthusiasm and their faith in my books.

I must also thank another, sadly now deceased author, who was such an influence on my writing career—Rosemary Sutcliff. Her novels of Roman Britain, especially, inspired me to write. Running through many of her novels is the presence of a ring that has a flaw, shaped like a dolphin, in the stone. Hence the name of one of the ships that appears in this book. My small, personal, tribute to her.

And to my family, Ron and Kathy, thank you for not minding the preoccupation I have for my writing. Neither of them complain that I forget to do the laundry or the shopping or prepare dinner—although Kathy, now that she is grown up, has mastered the art of survival and learned to cook.

Kathy is not only my daughter but my best friend. This book is dedicated to her, even though because of her severe dyslexia she will not be able to read it. The opening verse used for the section headings was written by Kathy several years ago when she was at school; because of her difficulties, she experienced an enormous lack of confidence and low self-esteem. She wrote it to express her feelings, and I felt it appropriate to use it in this novel.

I felt as proud of her courage and bravery then as I do now.

My heart may fight for power and my head can fight for tears, but nothing can stop my anger, nor my fears. 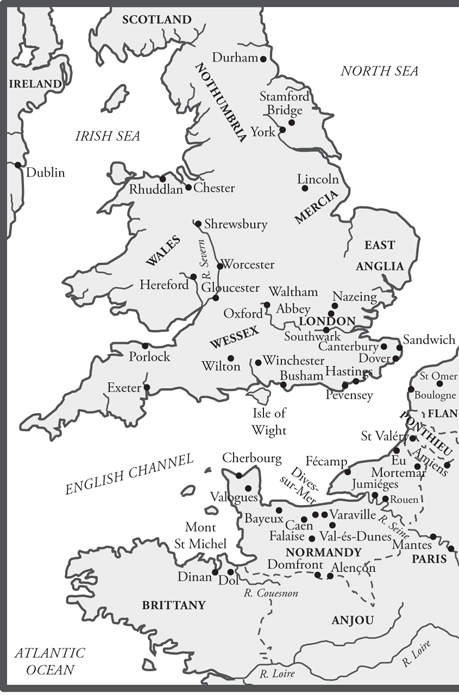 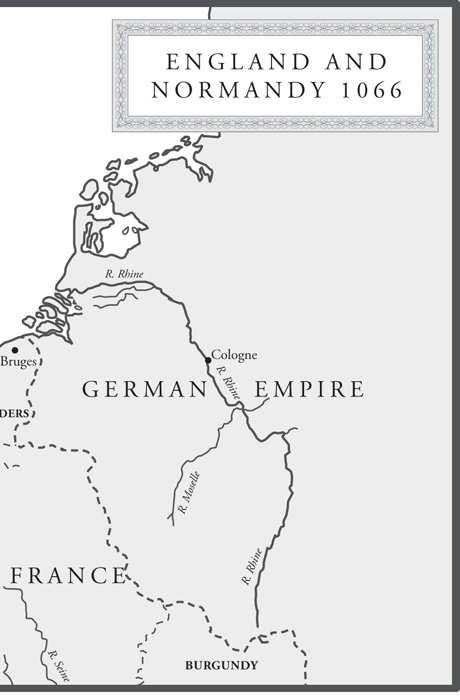 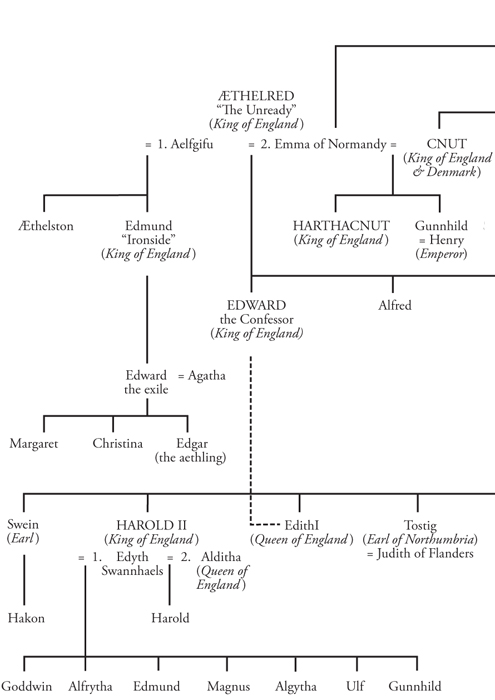 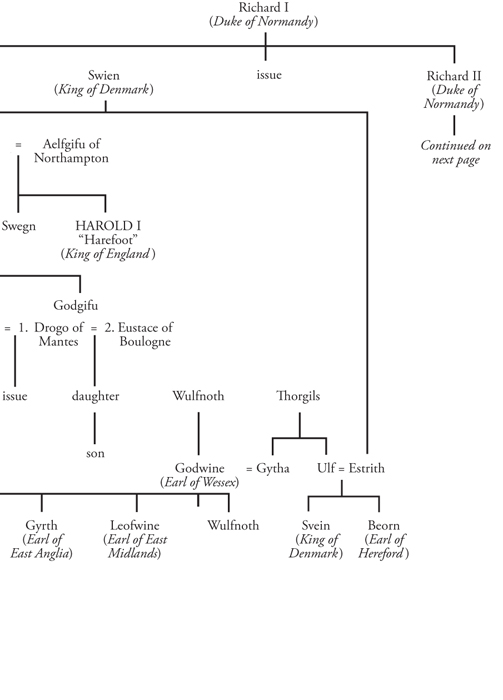 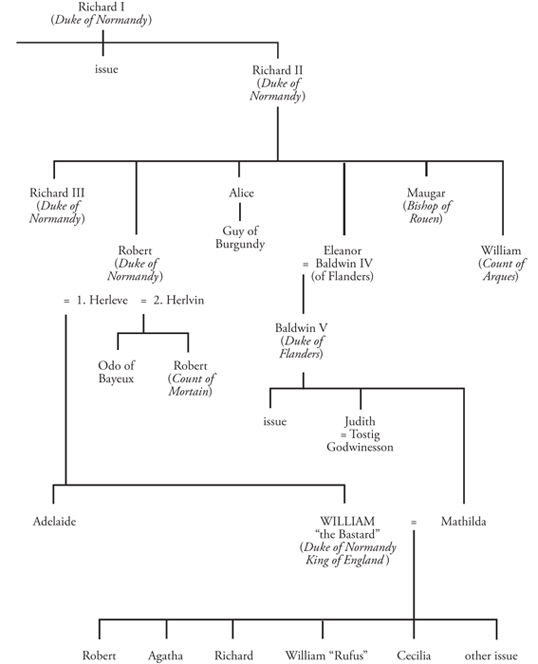 Part One
Fight for Power
1

Emma, twice married, twice widowed, Dowager Queen of England, watched her only surviving son dance, tripping and prancing with dainty steps among the boisterous twirl of men and women. With the solemnity of the coronation ritual completed, and the pomp of the banquet ended, this evening’s celebration and merry-making came most welcome to the guests here within the King’s Hall at Winchester. A pity that the crowned king had to be Edward.

Emma sipped at her wine to disguise the flare of contempt. Edward, her first-born son, crowned and anointed this day as King of England. She would have to learn to accept it. She took another sip, savouring the richness of the red grape as it warmed her throat, overcoming the taste of bile that rose from her stomach. Accept it, maybe, but she would never come to like it! Edward was as weak and shallow as his incompetent father, Æthelred, had been. How well had the clerics who wrote the history of these things mocked that name! Æthelred,
Noble-Counsel
—and how soon into his dithering, floundering reign had that been altered to
un-raed
, ill-counselled?

A thunder of laughter from the far end of the crowded Hall drew her attention. Godwine’s two eldest sons, Swegn and Harold, stood among a group of fine-dressed young men sharing some, no doubt lewd, jest between them. For all their faults—and where the Earl and his brood were concerned, there were faults a-plenty—they were sons to be proud of. Swegn might be wild, more interested in the pursuit of enjoyment rather than the demands of decision-making, but these faults were outweighed by better traits. All Earl Godwine’s sons were strong, courageous and manly, aye, even young Leofwine, who was but seven years of age. Where was the manliness in her son Edward?

Unable to keep her thoughts to herself, Emma spoke to the man sitting beside her, his hand tapping out the merry rhythm-beat of the dance on his knee. “I have been wife, and queen, to two men who have ruled England.” Her words oozed contempt. “You would have thought one of them could have sired upon me a man worthy to be called son.”

“My second husband, Cnut, gave me a child of each sex, both of whom had the constitution and life-span of a mayfly.” Briefly, an expression of regret clouded Emma’s face. To be queen for over two score years, to rule as regent, survive attempts of murder and the harsh bitterness of exile: such a woman needed to shield her weaknesses from those who would, at the drop of an autumn leaf, oppose her. But Godwine knew Emma well, better perhaps than either of her husbands. Harthacnut, her youngest son, she had genuinely adored. A boy like his father, wise and disciplined, with a sense of duty and purpose; strong of body and mind. How much had she endured for that lad! And for what? For him to die of a seizure when he was but three and twenty and crowned king for less than two short years.

“The life of the wrong son was ended,” she said softly. Godwine assumed she referred to Harthacnut’s untimely death, winced as she murmured, “It ought have been Edward killed, not Alfred.”

Godwine made no comment to that. Emma had borne two sons to Æthelred: Edward and Alfred, and Alfred was a name that still conjured difficult memories that brought the blood stealing into Godwine’s cheeks. As young men, exiled from England, the brothers had tried and failed in a pathetic attempt to claim their right of succession after Cnut’s death. Captured, the boy Alfred had been placed in Godwine’s care. It had not been good care for the lad had fallen into the murdering clutch of Cnut’s illegitimate son, Harold Harefoot. Imprisoned and cruelly blinded, Alfred had not survived the torture. Ever since, Godwine had carried the blame for that wicked death.

But such was the fate of young men who tried to take by force a crown from the one who was already, rightly or wrongly, wearing it.

Disdainfully, Emma snorted. “A pious weakling with neither brain nor balls.”

“Give him time, my Lady. He has been almost thirty years an exile. He was but eight when forced to flee to your birthplace in Normandy.”

Aye, it must have been hard for the lad and his brother Alfred, when they left London, muffled by the concealing darkness of night, bundled into a boat and taken, alone and frightened, across the sea to live among those of a foreign tongue and way of life. Never knowing when they would return to their mother, and England. Knowing, later, that when she agreed marriage with their father’s usurper, Cnut, that the “when” would not come until the Danish conqueror met with death. And even then, only if their place had not been superseded by other sons.

“Look at his hands! Too delicate to wield a sword,” Emma announced with scorn. “I pity England if she is ever again faced with invasion. At least Alfred, for all his childhood mewling and whimpering, had the stomach for a fight once he was grown.”

Godwine refrained from answering. Alfred, as king, would not have survived beyond the turn of a season, not against experienced, battle-hardened men such as Magnus of Norway or Svein Estrithson of Denmark—those two Viking seafarers had always been far too concerned with England’s affairs. But at least the roving greed of their ancestral cousins, Emma’s kindred the dukes of Normandy, were of no consequence to England’s future. The present Duke, William, was yet a boy. He would have problems enough keeping his head attached to his shoulders.

With tact, Godwine commented, “Edward is amenable. He listens to his elders and accepts the wisdom of the Witan, his council.”

“He does not listen to me! I came into this world nigh on four and fifty years past. I have been Queen of England from the age of thirteen when I was wed to that weak fool Æthelred. I ruled as regent for Cnut, when his duties as king of Denmark and Norway took him across the seas. I guided Harthacnut through his brief but glorious reign—yet this whelp Edward, the first-born son of my womb, publicly spits on me and calls me an interfering hag!”

She glared at Godwine, but fell silent as the whirling dance finished amid laughter and excited applause. She watched as Godwine’s sons were joined by a few of the breathless dancers, Harold swirling a fair-haired young girl into his arms.

His sister laughed back at him, her eyes bright with youth and excitement, her cheeks flushed pink from exertion and the heat of the crowded Hall. Edith was a resourceful girl, determined to enjoy herself whenever opportunity presented itself. Watching her, one eyebrow raised, Emma had a suspicion that she might also have high-reaching ambitions, and the shrewdness to take full advantage of those offered opportunities. Pride was as ripe in the daughter as it was in the sons. Edith would make a good wife for some power-seeking young earl. Or…Emma sucked the inside of her cheek, then sipped again from her silvered goblet. Or perhaps Edith, only daughter of the noble lord Earl Godwine of Wessex, would marry higher?

Edward was talking, all light smiles and expressive hands, to that odious man, Robert Champart, one-time Abbot of Jumièges. Emma was Norman by birth, daughter to the illustrious Duke Richard of Normandy, great-granddaughter of the Viking, Rollo, the first acclaimed duke of the North Men, the Normans. She ought to feel an affinity for her fellow countryman, but there was nothing but dislike in her for this one. A secretive, scheming, cunning, snide little man, too ambitious and arrogant to be a man of God. Her son, the fool, doted on him like a youth suffering the pangs of first love.

“You are fortunate, Godwine,” she said, and again that hint of regret edged into her voice. “Your sons are men worthy to be called sons.” She stared straight at the Earl. Unblinking, and perfectly serious, she added, “I would that I had trusted you when I was young enough to take a lover to my bed. Your seed, or either of my lawful husbands’ to sire my sons?” She locked her ageing brown gaze into the vividness of his blue. “In hindsight,” she finished candidly, “would yours not have been preferable to theirs?”

Godwine was not often flustered, but her words left him speechless, his heart fluttering, his manhood stirring. For the most part he remained loyal to Gytha his wife, save for the occasional rut with a tavern whore or village maid when campaign of war, or requirements of court, kept him overlong from home. She was a good woman, Gytha.

But a man who valued his life, and his privates, did not openly lust after the woman who had twice been queen.

The Peacemakers by Richard Herman
Hide My Memories: A Romantic Suspense Thriller Series (Hide Me Series Book 1) by Lisa Ladew
Prep work by Singer, PD
The Uninnocent by Bradford Morrow
Somewhere in Sevenoakes by Sorell Oates
The Lace Reader by Brunonia Barry
Sweep in Peace (Innkeeper Chronicles Book 2) by Ilona Andrews
You or Someone Like You by Chandler Burr
The Secret of Red Gate Farm by Carolyn Keene
Tangled Up In You (A Savioe Family Novel) by Atkinson, Ginny