Read I Still Have It. . . I Just Can't Remember Where I Put It Online

I Still Have It. . . I Just Can't Remember Where I Put It 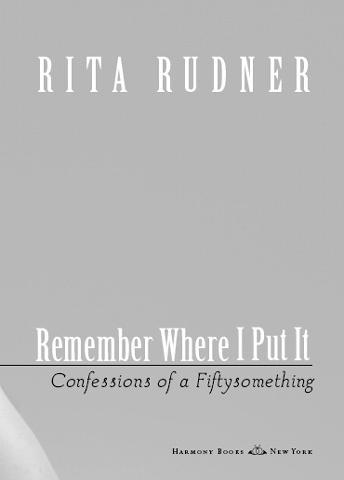 Go Ahead, Open This Bag

A Hole in Eight

And Away It Went

And the Gift Basket Goes To…

Superficial Nightmares of the Overprivileged Woman

Dining in the Dark

Everything New Is Old Again

Things That Amaze Me

’Twas the Night After Christmas

If Not Now, When?

On Your Mark, Get Set, Sit Down

Please Don’t Be My Neighbor

Vacations of the Not So Rich and Famous

Things I Never Thought I Would See in My Lifetime

The Advantage of Vintage

The Proof Is in the Child

To Hell in a Handbag

Who Don’t You Trust?

Writing this book would have been so much. . .

For my lovely daughter, Molly,
who got old enough to go to school
so I could finish this book.

T
HERE IS SOMETHING SO TRAUMATIC ABOUT A
woman turning fifty that for a while I was unable to form the actual word. I was more comfortable getting a laugh and telling people I was filthy than having to say the word
fffiffffty.
In fact, I still stutter a bit, even in print. Half a century is a long time to be on the planet, and though I’m grateful to be not only alive but healthy, being healthy gives you the freedom to obsess over the things that don’t really matter, like wrinkles, veins, and how tricky it is these days just to be able to turn on—excuse me, I mean power up—a television.

With the passing of every decade, our mortality becomes a little clearer and our eyesight a little fuzzier. One day the writing on the menu becomes so blurry you just can’t bluff anymore. Now, I have to mention that in this optical respect, I’m lucky. I can see close up and my husband can see far away, so we’re covered. He tells me who’s in the movie and I tell him what’s in his sandwich. Together we’re human bifocals.

The comforting factor about age is that nobody is immune. The blond-haired bombshells of today are the blue-haired ladies of tomorrow. When I turned fifty, it also gave me cause to reflect on all the things that have gone right in my life. Marrying the right man, choosing the right career, and making sure my closet had lots of hanging space were all good decisions.

Fifty also caused me to reflect on friends who have left me too early due to genetics, disease, or simply being in the wrong place at the wrong time. I hope I’m lucky enough to live until I’m totally incontinent—I mean incompetent. In the meantime, I’m determined to enjoy and celebrate everything about being in my filthies.

W
HILE
I
DO OCCASIONALLY ORDER ITEMS ON THE
Internet, it’s hard to teach an old shopper new tricks. I’m convinced that the catalogue will eventually disappear, but not until the last baby boomers have kicked off their smelly Nikes and been buried in mulch.

There is currently no treatment center in Malibu for catalogue addiction, so I was forced to assemble a group of women with similar problems to meet in my living room. They all had room to sit once I moved some catalogues.

I blame Victoria’s Secret. My friend ordered a blouse for me as a birthday present, and the company’s first final clearance catalogue made its way into my clutches three houses ago. It doesn’t matter how often I move; the catalogue knows where I’m living. If I’m ever kidnapped, I’m certain it would find me before the police.

After perusing the final clearance issue numerous times and folding down the corners of pages showing outfits that were in the running but had not yet won my love, I ordered a pink sweatshirt and matching sweatpants. Since then, I have received roughly three hundred catalogues featuring buxom babes clad in scanty attire. On page 27 you can still find the same pink sweatsuit I ordered ten years ago. Either I am the only woman in the world who likes pink sweatsuits or they dramatically overstock—or possibly they just like the picture.

Now, I love the Victoria’s Secret catalogue, but I have to mention that with each issue it edges closer and closer to pornography. The bosoms on the otherwise skinny women appear to be inflated. The last issue was so chockfull of overly endowed ladies, I couldn’t even keep the magazine closed. And where exactly would I wear a head-to-toe black lace jumpsuit? At a Peeping Tom convention? Plus, as far as I know, there are only two types of women who prefer garter belts and stockings to panty hose: hookers and my mother-in-law. Hookers because of obvious reasons, and my mother-in-law because of her unwillingness to acknowledge the existence of any stocking advancements since 1947.

The Victoria’s Secret catalogue was only the tip of my problem. If that were the only booklet I was receiving, my mailman would not be in the hospital with a hernia. Word instantly goes out into the catalogue universe if you order so much as a pen, and the next day your mailbox is stuffed with a cornucopia of nonsense.

It was last November that I first noticed Herb exiting from his mail truck rather delicately as he lifted the block of catalogues too thick to be placed in my mailbox and dropped them on the ground like firewood.

“I think this might be my last holiday season delivery,” he said. “My lumbar support belt isn’t really cutting it anymore.”

“Is it me? Is it my catalogues?” I asked guiltily.

“It’s not just you,” he reassured me. “It’s all women…and Neiman Marcus.”

“Is it in that stack of crap? You don’t put the BOOK in a stack of crap,” I said, pointing to the roped-together periodicals.

Herb then handed me the BOOK. If you are not familiar with the BOOK, every Christmas Neiman Marcus puts out a BOOK of things that people can’t possibly afford. It’s beautiful, it’s classy, and last year it featured a space station that cost several million dollars. I took it from Herb and caressed it with my nearsighted eyes.

Herb then handed me seven catalogues from Pottery Barn.

“Can I ask you something?” Herb mumbled wearily.

“Sure,” I replied, folding down a corner of a page of the BOOK featuring a belt costing 65,000 dollars.

“Why do you need seven catalogues that are exactly the same?”

“If you look closely, they’re not all exactly the same. My name is spelled slightly differently on every single copy. The computer made a mistake and there is no going back.”

“So when they come next time, can I throw away five of them?”

“What? Are you mad? They’re a family. When I throw them away, I want them to be together.”

The really sad thing is that I haven’t ordered anything from Pottery Barn for over six years. But you never know…someday a lamp, a bed frame, and a bureau just might catch my eye and we could be together for the rest of our lives.

It was then that I spotted Herb holding the new Williams-Sonoma, or as my mother-in-law calls it, Williams and Sonoma. She might be right. It has to take at least two people to think up that many things nobody needs.

“Give that to me,” I commanded.

“Don’t grab,” Herb scolded, pulling it away. “Your husband promised me a big Christmas tip if I didn’t let you have this.”

“I’ll give you a bigger one if you give it to me,” I replied, ripping it out of his hands.

“Please don’t sign me up for the cheese-of-the-month club again. I can’t take it,” Herb pleaded. “Nobody could eat that much cheese. Mickey Mouse would have given up on it.”

“You didn’t like my cheese gift?” I asked in horror. “It cost two hundred and twenty dollars plus shipping.”

“I like cheese. But if I run out, I can drive to the supermarket and buy some more.”

“But this cheese comes in the mail.”

“Rita, I’m a mailman. That sort of thing doesn’t impress me.”

I flicked through the catalogue.

“What about a pigeon toaster? It has a specific heat designed only for toasting pigeons…. Or maybe a cake girdle. If your cake is too big for the plate, you can squeeze it and correct the size…. Or maybe a turkey shredder. If you’ve cooked a bad turkey and you don’t want anyone to know, you can shred it.”