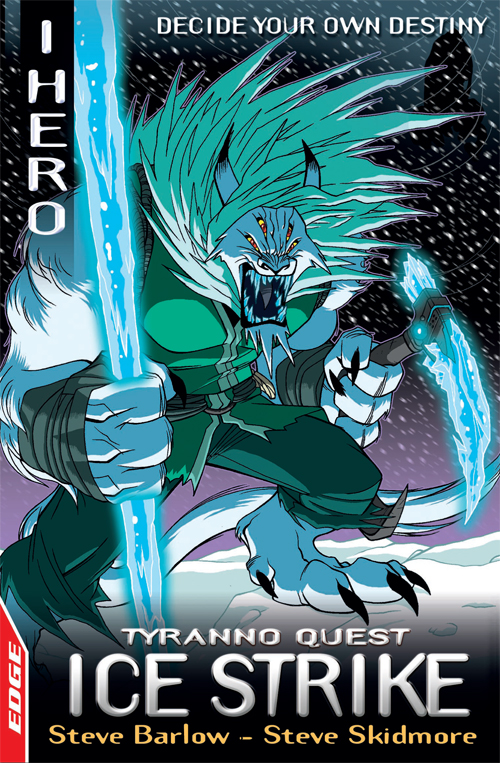 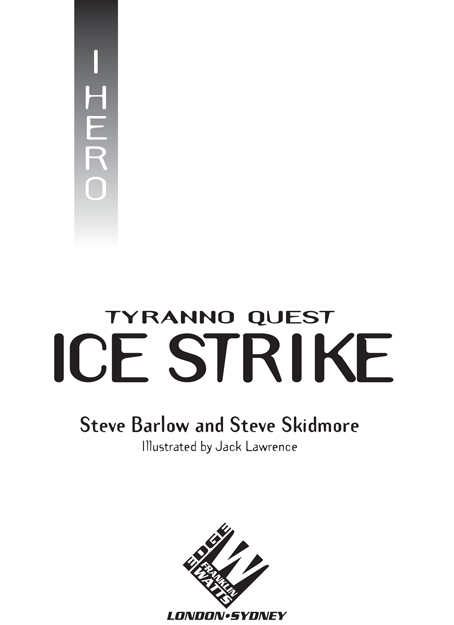 This ebook edition published in 2012

The authors and illustrator have asserted their rights in accordance with the Copyright, Designs and Patents Act, 1988.

Franklin Watts is a division of Hachette Children’s Books,
an Hachette UK company.

How to be a hero

This book is not like others you may have read. You are the hero of this adventure. It is up to you to make decisions that will affect how the adventure unfolds.

Each section of this book is numbered. At the end of most sections, you will have to make a choice. The choice you make will take you to a different section of the book.

Some of your choices will help you to complete the adventure successfully. But choose carefully, some of your decisions could be fatal!

If you fail, then start the adventure again and learn from your mistake.

If you choose correctly you will succeed in your mission.

Earth Defence is an ultra-secret unit whose job is to defend Earth from attacks by hostile alien forces. The Earth Defence HQ, called Area 61, is based inside a mountain.

You have been given an amazing piece of technology to help you with your quest. It is a Defence Armed-Response Teleportation suit (DART for short). Not only does the suit have an incredible weapons system, but it also allows you to travel to distant planets and different dimensions.

Its inventor is an alien member of Earth Defence, called QTee. He is the technical genius behind all of their weapons and equipment. 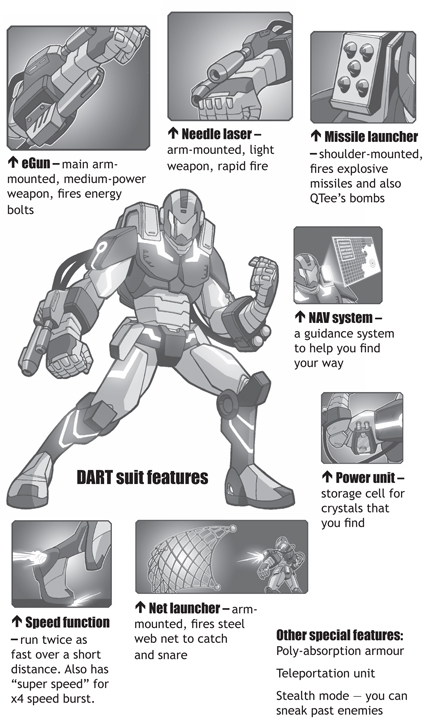 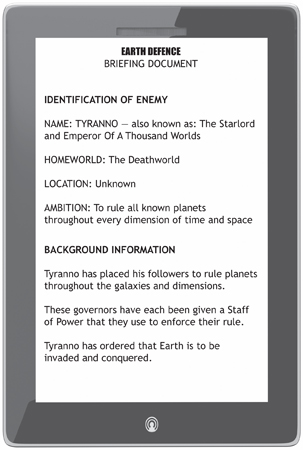 You stopped their attacks by travelling to both Airworld and Fireworld to defeat the two rulers. You have also captured the crystals from each Staff of Power. QTee has placed them in the DART suit, which means that you now have control over the elements of air and fire.

And you will need them, because you know that Tyranno will continue with his plans to invade Earth. There are dangerous days aheadâ¦

You are taking a test flight in the DART suit
over the forests that surround Area 61. You are testing the suit’s new fire controls by sending streams of flame shooting across the sky.

Suddenly from out of nowhere, a huge snow cloud forms around you. The temperature plunges as a raging snowstorm erupts. Icy winds blow you around like a rag doll. Ice begins to form on the DART suit.

You swoop down and open fire on the frost bears with your eGun. You score one or two hits, but the others just keep shooting at you.

The frost bears track you across the sky with their guns. Two ice beams cross over in front of you, and you only just manage to fly under them. You know that you can’t continue to dodge the bears’ attack and shoot at them with your eGun.

If you wish to try to get away using super speed,
go to 30
.

Before you can give your order to the DART suit, your enemy lunges forward and bites you with its piercing icicle teeth.

The suit is punctured! You feel the ice cold grip at your body.

“Teleport,” you order, but it is too late, the DART suit doesn’t respond.

Once again the ice snake bites at you with its diamond-hard teeth, ripping holes in the armour.

Then it takes you in its mouth, shakes you around and flings you against the mountainous sheets of ice. Your body is broken and you drop through the air onto the frozen ground.

The teleport to Iceworld takes seconds.

The bright white light fades away and you find yourself standing in the middle of a huge frozen lake.

“Outside temperature minus 90 degrees Celsius,” the computer warns. You know that if your suit is damaged you will freeze to death very quickly.

As you stand wondering whether to head north or south, you see movement ahead of you. Several white shapes are heading your way across the ice. They are travelling at high speed.

“Scan ahead,” you order. 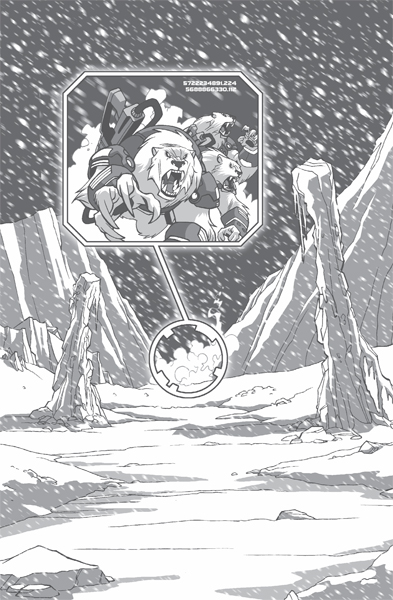 To cause a diversion you aim the gamma-ray laser at Arktos’s ice palace and fire. The laser beam hits the palace.

Nothing happens. You curse QTee and his experimental weapon. Then suddenly all hell breaks loose. The palace glows bright blue and explodes as it vaporises and sends a shockwave across the glacier. Arktos’s forces panic. They rush around in a state of confusion, firing their weapons and trying to get away from the melting glacier.

“Scan and locate Arktos,” you order the computer.

You look up. Arktos is mounted on a battle mammoth and is charging towards you. He is using his Staff of Power to summon a huge ice storm. A raging plume of cloud towers up into the air.

If you wish to attack him with your weapons,
go to 22
. 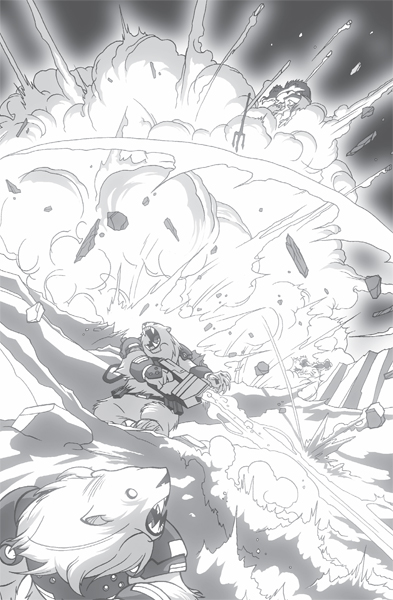 You head upwards and into the clouds. The wind picks up and hammers against you. It reminds you of the ice clouds you had to deal with back on Earth. You continue upwards, but the mountain seems to be never ending. Just when you think you glimpse a peak, another wall of ice appears — it is as if it is growing.

If you wish to blast your way through the mountain of ice,
go to 34
.

If you wish to try and find another way through,
go to 37
.

If you wish to head to Arktos’s southern palace,
go to 41
.

You try to fly up and out of the storm cloud, but the DART suit fails to respond. Ice now covers your visor and is forming inside the suit. You feel yourself dropping from the sky.

Your mind goes numb as your body freezes. You smash into the ground. The suit explodes and you shatter into millions of ice crystals.

“Super speed,” you order the suit.

You fly at head height, skimming along the glacier towards the main entrance.

Suddenly, a solid wall of ice shoots up from out of the glacier! You have no time to react and you smash into it. Your head smashes against the helmet’s visor. You pass out and crash to the ground.

When you gain consciousness, you look up and see a huge glacier giant standing over you, holding an ice trident at your throat.

A Corpse in a Teacup by Cassie Page
Going Gray by Spangler, Brian
A Bad Day for Pretty by Sophie Littlefield
To the Land of the Living by Robert Silverberg
Sketches of Desire: Prequel to the Art Models Club Series by Amanda Meadows
L.A. Caveman by Christina Crooks
The Protectors Christmas Box Set (sexy paranormal romances) by McFalls, Dorothy
America Aflame by David Goldfield
Fatal Disclosure by Sandra Robbins
Oblivion by Karolyn Cairns [paranormal/YA]