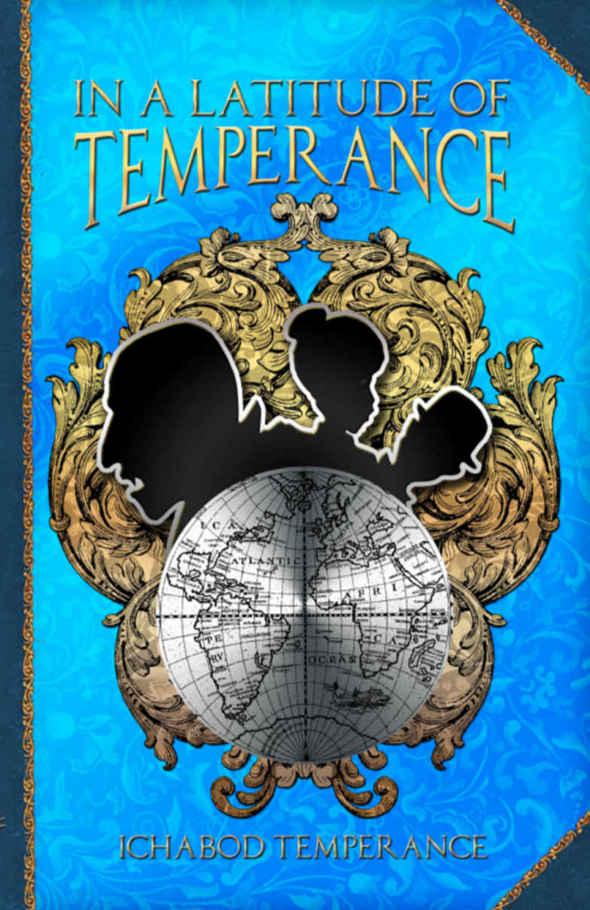 This book is dedicated to a wonderful gentleman living in Edinburgh, Scotland.

The Adventures of Ichabod Temperance

Volume One: ‘A Matter of Temperance’

Volume Two: ‘A World of InTemperance’

Volume Three: ‘For the Love of Temperance’

Volume Four: ‘A Study in Temperance’

Volume Five: ‘In a Latitude of Temperance’

Volume Six: ‘A Measure of Temperance’

Volume Eight: ‘The Title of Temperance’

Chapter Fourteen. The Battle of Ushuaia

Thank you, Wolfgang Metzger, for the charming silhouettes used on the cover.

Thank you, Sergeant Turk, for the wonderful cover graphics.

Thank you, A.L. Williams, for the additional cover graphics.

Thank you, Bram Stoker, for this endlessly fascinating genre.

Again, this and the other books could never have happened without the gracious assistance of my lovely, patient and kind muse, Miss Persephone Plumtartt.

Ninety feet of ice separate me from the ocean’s surface. Flight through these frigid, polar waters is tricky. I dare not show my beak in the channel the humans have carved for their ships. The brutes have proven their marksmanship skills in that confined chasm. My ice shelf cover protects me, but my burning breast must draw air again soon!

A flash of light! That is the opening in the ice I seek. The unnatural, flaring light ahead marks my destination. I must find a place to break the water’s surface and breathe again. Though my lungs are set to burst from their labors, I force myself to approach the water’s surface carefully. Working my wings to slow my ascent, I crest the ice-filled surface.

Huge chunks of floating ice, each weighing thousands of pounds, bob about my position. I must remain wary lest I am crushed between them. They do, however, provide cover so that I may observe my quarry.

This secret harbour is enormous, extending for hundreds of yards. Strange in their perfection, the flat walls of the channel lead to this exact square harbor. How are these men able to carve the ice in so precise a manner and form it to their needs? Walkways to accommodate their legs and feet lead to the carved channel, and also back into this forbidden continent. Three ship-mooring slips have been cut into one side of this artificial harbour. These docks conform to the three human ships here in this hidden, ice-bound bay.

One, a hybrid ‘steamer’ and sailing ship, is out bound. I need to make a note of her name and nationality. ‘Stoker’ is proudly painted on her bow and across her fantail. The ship is completely black but in a way that suggests that the colour is derived from the pigment of the wood, and not from paint. This holds true for the disquieting black sails that are being unfurled. Something in their thick, fleshy unraveling fills me with a nameless dread. She is a Norwegian ship by her flag, a sturdy, well-built icebreaker, but I am quite sure that the Nordic registration is a falsehood. My contacts within the intelligence community tell me that a Romanian flag would be more appropriate. Perhaps the ship’s owners inhabit an even darker section of that foreboding country. Her masters very likely hail from that ominous area whose name begins with the letter ‘T’. On what sort of foul mission could her evil controllers be sending her? I must put my own forces at work to trail her ill-omened course and give them leave to intercede if, or when, necessary.

A large freighter is moored to their admittedly ingenious dock of solid ice. Many human men work to unload her heavy, mysterious cargoes. A great crate is being manipulated by a crane from the ship. Voices shout out directions to deposit the wooden box on the strangely precise sculpture of the pier. These human vocalizations echo from the ice cliffs in the confines of the large, private harbor. To my mind, the voices are in a Slavic tongue and accent. This furthers my suspicions that this operation’s true origin lies in that remote and forgotten section of ancient Europe. Those hidden reaches of the Carpathian Mountains are still wild in many respects.

These crates they handle have the look of containing heavy machineries. What diabolical purpose could these clock and mechanical devices serve?

Then we have our third ship, the ‘monster’, of which I have heard so much. This, more-so than the threat of being shot by rifle, is why I enter this domain alone and not in the comradeship of my brave brethren. The ‘monster’ is well named, for though I know it to be a construct of man, and not an organic, it is nonetheless horrific in appearance. Hideous, bulbous eyes at the front of the submersible are mercifully turned away from me. The points of the creature’s aquadro-dynamic spine are highlighted by the intense, burning arcs on the opposite side. Gigantic, silhouetted shadows jump about the icy walls in brief bursts of blinding illumination as an accompaniment to some strange metal-working process. The brilliant, though erratic, purple and white flashes are caught by the reflective quality of the monster’s glass eyes to strangely inspire the spark of life in  the clockwork creature. Sharply defined and sporadic shadows animate the metallic scales of the leviathan causing it to shimmer and ripple with berserker excitement. I half expect the abominable aquatic to leap with mechanical life and turn to devour me.

The two ships operating with falsified registries, and the ‘monster’, are completely unknown outside of my own secret knowledge. My sources indicate nefarious motives behind this extensive operation. My own black eyes have seen the devils at work for themselves to confirm the ghostly rumours’ truth. A major undertaking is underway, of which the world community is ignorant.

My every instinct tells me this is a criminal operation. Extreme secrecy has been achieved here at the bottom of the world. Suspicious characters, glimpsed only as fleeting shadows, appear to inspect the construction works and the unloading process.

I’d better go ahead and take my leave. I want to bring my own forces to bear to stop this threat. I doubt very seriously that I can expect any help from humanity in this endeavor. For such an ‘intelligent’ species, they can be very stupid, condescending, and infuriatingly obstinate at times. The few of their kind that I am able to tolerate are now scattered about the planet. I intend to confront this danger, with or without two-legged comr
~bleck-kow!
~
“Ah!”

~kah-bisssh!~
The block of ice that floats between myself and the harbor exiting steamer explodes in painful shards as I hear the shot whiz past my ear. Immediately, on instinct, I drop beneath the surface. I have foolishly dropped my guard with almost disastrous results. A marksman upon the mainmast of the dark ship ‘Stoker’ has very nearly shot me to pieces. I deliberately tick off several seconds, and change positions for concealment behind another block of ice. I must return to the surface for a better lungful of air before I start on my deep water, under the ice shelf journey of withdrawal from this hated harbour.

The rifle fire that accompanies this hasty gulp of air only confirms in my mind that I am indeed on a course of collision with the fiends. I think this also confirms their knowledge that there are forces such as I, and not just human foes, with which they must contend. This is no gentle enemy I engage. This is an organization of ruthless killers.

I shall not rest until my sub-surface, sub-arctic, sub-zero suspects are swept asunder. I shall take these walking sardines into my merciless beak and swallow them whole!

“How could I be so blinking stupid?”

“Why do I ask you, Mr. Chair? It is because I tire of speaking to Herr Ashtray. I have no one else with whom to converse, so I am forced to engage you, my furniture, for cheery company.”

“‘But why, Professor, do you pile us up in the middle of the room?,’ you ask, my little footstool friend.”

“Obviously, I have shoved my bed to a central location and thrown the chair, table, lamp, yourself and anything else that gets in my way so that I may all the more furiously unleash my frustration in a circular path within this tiny room, as opposed to having to pace back and forth. With the velocity gained from my heady momentum comes a centrifugal slosh of brain fluids within my enormous cranial capacities. These fluids that power the brain cells within my gigantic skull that hangs in a spine-distorting forward lunge, are now employed to be pulling me ever forward in this perpetual path. I almost have enough room to work my cane and thus gain ever more velocity to further empower the crushing intellect that got me into this mess with all the efficacy of a perfect imbecile in the first place. I scream at you with no acknowledgment of your inability to understand as you are far more likely to comprehend my mad ramblings than most of my students that I am forced to endure!”

“There, that concludes ninety-nine revolutions in a clock-wise manner. I can now turn and balance my bodily hydraulics with a counter-revolutionary sequence of the equal amount of orbits as earlier exhibited; thusly I begin.”

“Trapped, I am, in this frozen dungeon of a hotel room. I never should have sent for that little fool, the Alabama tinker. That idiot will come blundering in, completely oblivious to the fact that he enters a nest of bloodthirsty monsters.”

“Why was I not wary myself? When I got the invitation and the royal treatment, I was blinded to the true and menacing danger that enticed me to journey to this glacial gloom. How I rue the day I ever met that little ferret of a man! I knew I could not trust the horrid little fellow, but the trappings were all there to distract my otherwise prudent sensibilities. The great piles of cash dazzled my eyes. The promise of fame and scholarly prestige held a prideful allure to my intellect’s vanity. Travel arrangements generously taken care of by luxurious, private ship were a nice fringe benefit. Alas, it was the pleasantries of the strikingly beautiful female companionship and their undeniable charms that convinced me to participate in this mad scheme. I can understand my having fallen prey to this alluring and charming threat. Good grief, but these women have an exotic sensuality that I had no idea existed in this world! I should have known I was being bamboozled, but one final element ensured that I could not resist the request of my assistance in this ominous, though fantastic, project. It was the promise of scientific freedom unbound that sent me on this doomed voyage.”

“Never would I have thought I could ever have the opportunity to put my theories into practice! My colleagues all laughed when I said that the hypotudinal forces of Limberger’s axiom were amiable with the theorems of gyrotic inertias in harmonic resonances to affect the colliquitatium of the centrifugal aptitudes involved with the axial orientation by using planetary reverberati as an impetus to gyroscopically manipulate the orbital orientation of the particular sphere involved. How could I have ever imagined such a mad perversion of my simple idea?”

Street Magic by Pierce, Tamora
Rags & Bones: New Twists on Timeless Tales by Melissa Marr and Tim Pratt
Dead Is a Battlefield by Perez, Marlene
We'll Always Have Paris by Coburn, Jennifer
Philip Jose Farmer by The Other Log of Phileas Fogg
The Secret Staircase (A Wendover House Mystery Book 1) by Jackson, Melanie
The Scent of Almonds: A Novella by Camilla Lackberg
Necessary Errors: A Novel by Crain, Caleb
Vengeance Road by Rick Mofina
The Impressionist by Hari Kunzru