Read In The Coils Of The Snake Online

In The Coils Of The Snake 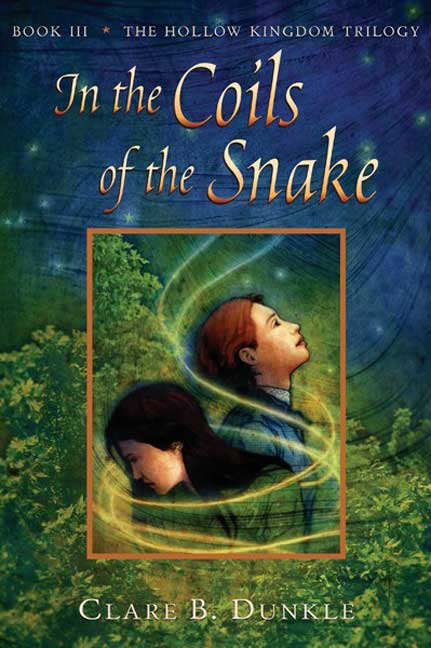 In The Coils Of The
Snake (The Hollow Kingdom #3)

by Clare B. Dunkle

“But why do you
have to die tomorrow?”

The great round
throne room was empty. No crowds thronged its
floor,
and the paving tiles of rose, cream, and serpentine marble displayed their
dizzying patterns. The polished walls of red and green porphyry gleamed
vermilion and olive in the light from the chande
liers, and the eighteen colossal black granite columns that held up the
golden dome glittered with countless flecks of silver mica.

Only two people occupied this room
that could hold hundreds,
this vast chamber
designed to contain the business of a realm. An
old goblin sat on the
throne that stood upon the dais, and a human
girl
of seventeen knelt before him, their voices damped into whispers
by the expanse of space and the velvet and brocade
curtains that
hung before alcoves and doors. He was ugly and bony, with
dull
straight hair that fell to his
shoulders, and his unmatched eyes
gleamed like coals, one green and one
black. She was statuesque and
beautiful, with
brown eyes and auburn hair, and her delicate pink
skin contrasted with
his gray fingers as she clasped his hands tightly in hers.

“Why tomorrow? Why so soon?”
she asked. “Couldn’t you die next week?”

Marak just smiled at
her.

“Catspaw
has waited his whole life to be King,” he said. “I’ve
ruled
for more than half a century now, and it’s time I passed the
power on. There will
be new advisers, new projects, the bustle of retirements and appointments, new
fashions, too, I wouldn’t doubt. There will be energy in this room again, with
a young, dynamic
King — mistakes, quarrels,
absurd plans — I can hardly wait to die
and set it all in motion.” He didn’t mention his inability to eat
and
sleep now, his failing magic, his labored breathing. These things,
he thought, were entirely beside the point.

“Miranda.” The young woman
looked up at him, her eyes full of
pain and
grief. By the Sword, she was magnificent, he thought
proudly. He had
trained her from the cradle to take her place in his underground kingdom, and
she would not disappoint him.

“Miranda,
three months from tomorrow will be the ceremony
that
makes you a King’s Wife. I’ve thought it best to keep you and Catspaw at a
distance, but you’ll find him to be a gifted ruler and a
good man. He doesn’t have my temper. He’s more
like Kate. And
he’s completely devoted to those he loves.”

The young woman
listened gravely. “I like Catspaw,” she
whispered.

Marak nodded his approval. “Ruling
a kingdom is hard, espe
cially at first,”
he continued. “The new King will need your encour
agement. And your people will watch everything you
do. They’ll
look to you for help, for comfort, for a thousand different
things. You’ve grown up knowing this, and I’m sure you’ll meet your obligations.”

“I will,” she promised
softly. A tear sparkled on her eyelashes before slipping down her cheek. Marak
watched it with idle interest. He thought it made a very pretty effect.

“Can I stay
with you?” she asked, but the old goblin shook
his
head.

“The time I
have left belongs to Kate. You need to leave now,
but
I want you to come to the crypt in the morning so that I can say good-bye.”

Quiet, unmoving, in
an agony of suffering, Miranda stared at
the
gray hands holding hers. Her guardian had always been there to
guide her. Now, in less than a day, he would be
gone. All that learn
ing, all that
brilliance lost, like galaxies disbanding. Like a universe
collapsing
into dust.

“I want to come
with you,” she said miserably.

The goblin King’s
eyebrows went up, and he chuckled at this absurdity. “But, Miranda, I don’t
know where I’m going!”

“I don’t care,”
she said quickly. “I want to be with you. All my
life, I wanted to come home with you, and you always made me wait,
but you promised that I could one day. And then,
when I finally did,
it was for such a short time, and now—” She
stopped herself with an effort.

Unperturbed,
Marak gave her hands a little shake. “Catspaw
will be all that to you,” he said. “I certainly
didn’t raise you to escort
me to the grave. You’re
going to be a King’s Wife in a thousand, Miranda! What a pity I won’t be here
to see you.”

The lovely girl
mastered herself again. She even managed to smile. Then she turned and left
him, crossing that empty desert of colored marble under the great golden dome.

The
goblin King had not planned to raise a human bride for his son,
but when the opportunity presented itself, he grasped its
possibilities
at once. Grasping possibilities was
Marak’s special genius.

Jack,
the human boy whom Lore Master Ruby had raised in the
goblin kingdom, knew that he would have to leave when he
grew up
because no woman in the kingdom could marry
him. But Marak’s
foster daughter, Til,
always wanted what she couldn’t have, and she spent years daydreaming about
this forbidden man. She was in love
with Jack before she ever even saw
him.

Marak
was not particularly impressed by her tears and protests of undying devotion.
The stormy Til was always distraught over something, and he decided that she
would soon forget her sweetheart. But
the
more he thought about the matter, the more he liked the idea.
Why not let Til marry Jack? The young human was
shaping up to
be a fine businessman, and he could arrange the selling of
their
dwarf-made goods without the need for
goblin trading journeys. The
neglected estate of Hallow Hill had
recently gone up for auction.
Kate’s distant
relatives had fought over it in court, bankrupting
her inheritance, and
it had changed hands several times since then. If Jack purchased the land with
Marak’s wealth, the goblin King could build safeguards into the legal documents,
protecting the goblins’ borderlands from human misuse.

But
there was a reason for allowing Til and Jack to wed that was
far more compelling than these simple practical
concerns. The clever
goblin savored the
chance to launch one last great scheme. His son
would not end up bound to a madwoman, as he had been for fifteen
years
in his first marriage. Instead, he would permit Til to marry
Jack and demand a daughter from them in exchange.
He would
leave her with her parents
to develop her human nature fully, but the
child would be his from
birth. No other goblin would visit her; he would raise her himself, and she
would have the benefit of all his wisdom and magic. The child would be
extraordinary, his greatest
and best
achievement, a King’s Wife down to her bones. If Til loved Jack before they
ever met, Marak loved their daughter Miranda long
before she existed,
from the moment he first planned out her life.

Little
Miranda adored her strange guardian, who sincerely cher
ished her and praised her for all her childish
accomplishments. The
goblin
King was a huge secret in her life: he visited Hallow Hill only
after
the sun went down and everyone else was asleep. No one but Miranda and her
parents ever saw him, and they were magically forbidden to mention goblins to
anyone.

It was Miranda’s
love of Marak that led to her greatest misfortune, many years before she was
old enough to understand it. Til never forgave Marak for choosing one of her
children to marry the prince. Her hatred of Catspaw ran very deep. She could do
nothing to harm her nemesis; Catspaw was out of her reach. But the young
Miranda was sensitive, and Til took out all her harsh anger on the child. The
entire household, to one extent or another, followed the mistress’s lead. It
was far better to stand with Til than against her.

The
goblin King didn’t force Til to be fair. Instead, he taught his
ward to be brave. He was not at all displeased that his
little girl had such a bitter opponent in her life. Humans measured themselves
by
adversity, he reminded himself. Miranda
would be the stronger for her misfortune. And her attachment to goblins would
be all the greater for her unhappiness in the human world.

But
the cruelest thing young Miranda had to deal with was one of her own beloved
Marak’s ideas. He decided to teach the child goblin.
This
difficult language required years of study and practice, and
because she could never explain to anyone how she
learned about it,
even the kindliest
members of the community decided that Miranda
was unwell. Goblin divided
her from everyone else and kept her
from
having friends. The more the others taunted her for her efforts,
the more fiercely proud and aloof she became in
the face of all their
ridicule.

And
so Miranda grew up with only one source of comfort: Marak
became everything to the lonely child. Between the
formidable per
sonalities of
her mother and her guardian, the young girl was molded
and
shaped, like hot iron between the hammer and the anvil.

The one great wish
of Miranda’s wretched heart was that her childhood would come to an end. When
she grew up, she could go with Marak to his realm and escape her unhappy
existence at last.
Then she would always be
with someone who loved and appreciated
her. She would live the life of a
queen, surrounded by admiring crowds, and no one would ever treat her
disrespectfully again.

But
Miranda had come into the goblin caves only weeks before,
and now her beloved guardian was leaving. She stood in
the hallway
outside the throne room, trying to
comprehend what this meant. The
few people
Marak had allowed her to meet in the kingdom couldn’t
begin to replace him. He had been her whole world
from her earliest
years, and tomorrow she would have to watch him die.

If a goblin King
lived long enough, his magic told him when his strength was almost gone. Then
he had to make a choice. Either he could lie in bed with his face to the wall,
hoarding that strength for
several days, or
he could arrange a few final meetings, bid farewell to
his court, pass once more through his solemn people as
they lined the
path to the Kings’
crypt, walk on his own two feet to his tomb, and lie down within it. That was
what Marak chose to do. He led the way, moving more rapidly than he had for
months. Why shouldn’t he? He would be resting soon enough.

The
crypt was a long cavern deep underground, completely
silent
and bitterly cold. No monuments lined it, and no elaborate
carvings marked its walls. Only the goblin King’s
family came
there, along with the dwarves who had charge of the place.
They
guided the sober group down the narrow
path between smooth rock
formations that seemed to drip and flow. The
torches the dwarves were holding flickered, as if the light couldn’t settle on
anything. Darkness waited outside their feeble circle, steady and final.

Miranda
walked at the back of the little procession, just in front
of the last dwarf, her thoughts chaotic and trivial. The
goblin King’s
sister-in-law,
Emily, walked before her with her handsome husband
at
her side. Ahead of Emily walked the goblin King’s Wife, Kate, small and
slender, her long golden hair gleaming in the torchlight. Taller than the
others, the prince walked with his mother, blocking Miranda’s view of the
goblin King.