Read Incidents in the Life of a Slave Girl Online

Incidents in the Life of a Slave Girl 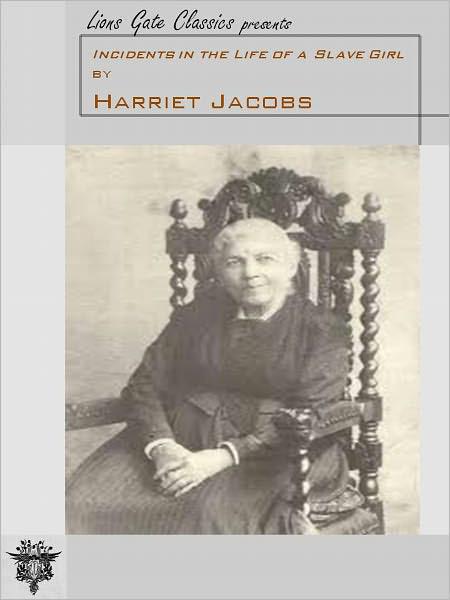 Preface by the Author

INCIDENTS IN THE LIFE OF A SLAVE GIRL, SEVEN YEARS CONCEALED.

II - The New Master and Mistress

IV - The Slave Who Dared to Feel Like a Man

V - The Trials of Girlhood

VIII - What Slaves Are Taught to Think of the North

X - A Perilous Passage in the Slave Girl’s Life

XI - The New Tie to Life

XIII - The Church and Slavery

XIV - Another Link to Life

XVI - Scenes at the Plantation

XXI - The Loophole of Retreat

XXIV - The Candidate for Congress

XXVII - New Destination for the Children

XXXII - The Meeting of Mother and Daughter

XXXVII - A Visit to England

A TRUE TALE OF SLAVERY

CHAPTER II - A Further Account of My Family, and of My New Master

CHAPTER III - My Uncle’s Troubles—My Further Experience of the Doctor, and Our Parting

CHAPTER V - My Master Goes to Washington as Member of Congress—He Is Engaged to ...

FOR THE BEST IN PAPERBACKS, LOOK FOR THE

INCIDENTS IN THE LIFE OF A SLAVE GIRL

Harriet Ann Brent Jacobs was born in about 1813 in Edenton, North Carolina. Her brother, John S. Jacobs, was born two years later. Their parents, Delilah and Elijah Jacobs, were enslaved, but they lived together as a family with Delilah’s mother until Delilah’s death. Harriet, then six, went to live with her owner, Margaret Horniblow, who taught her to read and sew. When Margaret Horniblow died in 1825, Harriet became the slave to Horniblow’s three-year-old niece, the daughter of Dr. James Norcom, a prominent citizen, who tried to force the teenaged Harriet into a sexual relationship with him. In an effort to fend off his advances, she began a relationship with another white man, Samuel Tredwell Sawyer, and bore him two children, whom Norcom planned to send to a plantation with a reputation for treating its slaves especially brutally. To divert him, Harriet ran away, eventually hiding in a crawl space in her grandmother’s house where she remained for almost seven years before escaping to the North in 1842. She lived and worked in New York City and Boston until her freedom was purchased in 1852. In the meantime, Sawyer managed to purchase his and Harriet’s two children as well as her brother John, who went on to work for the abolitionist cause. Harriet Jacobs wrote
Incidents in the Life of a Slave Girl
between 1853 and 1858, finally publishing it in 1861 under the pseudonym Linda Brent. John S. Jacobs died in 1875. Harriet Jacobs died in 1897.

Nell Irvin Painter is Edwards Professor of American History at Princeton University, where she currently heads the Program in African-American Studies. She is the author of several books, including
Sojourner Truth: A Life, A Symbol,
and editor of the Penguin Classics edition of the
Narrative of Sojourner Truth. 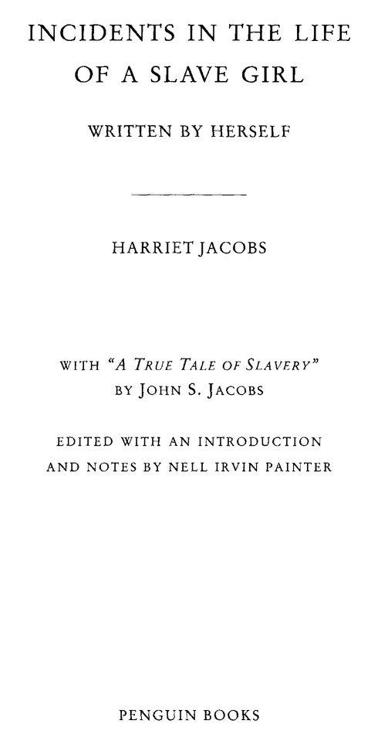 “A True Tale of Slavery” was published serially in
The Leisure Hour,
London, 1861.

Incidents in the life of a slave girl / written by herself, Harriet Jacobs.

With A true tale of slavery / by John S. Jacobs ; edited with an introduction and notes by Nell Irvin Painter.

The scanning, uploading and distribution of this book via the Internet or via any other means without the permission of the publisher is illegal and punishable by law. Please purchase only authorized electronic editions, and do not participate in or encourage electronic piracy of copyrighted materials. Your support of the author’s rights is appreciated.

H
ARRIET JACOBS’S
LINDA: Incidents in the Life of a Slave Girl, seven years concealed in Slavery, Written by Herself
(1861), the best-known nineteenth-century African-American woman’s autobiography, makes a marked contribution to American history and letters by having been written, as Jacobs stressed, “by herself.”
1
Many other narratives by women who had been enslaved (for example, Sojourner Truth) had been dictated to amanuenses whose roles diluted the authenticity of the texts.
2
Jacobs not only wrote her own book, but as an abolitionist and ardent reader, she knew the literary genres of her time. Describing an African-American family whose members cleave to one another against great odds, she skillfully plays on her story’s adherence to and departure from the sentimental conventions of domestic fiction. In so doing, she used its difference to a woman’s advantage. Her self-consciously gendered and thoroughly feminist narrative criticizes slavery for corrupting the morals and the families of all it touched, whether rich or poor, white or black. She lays the groundwork for the analysis of black womanhood.
3