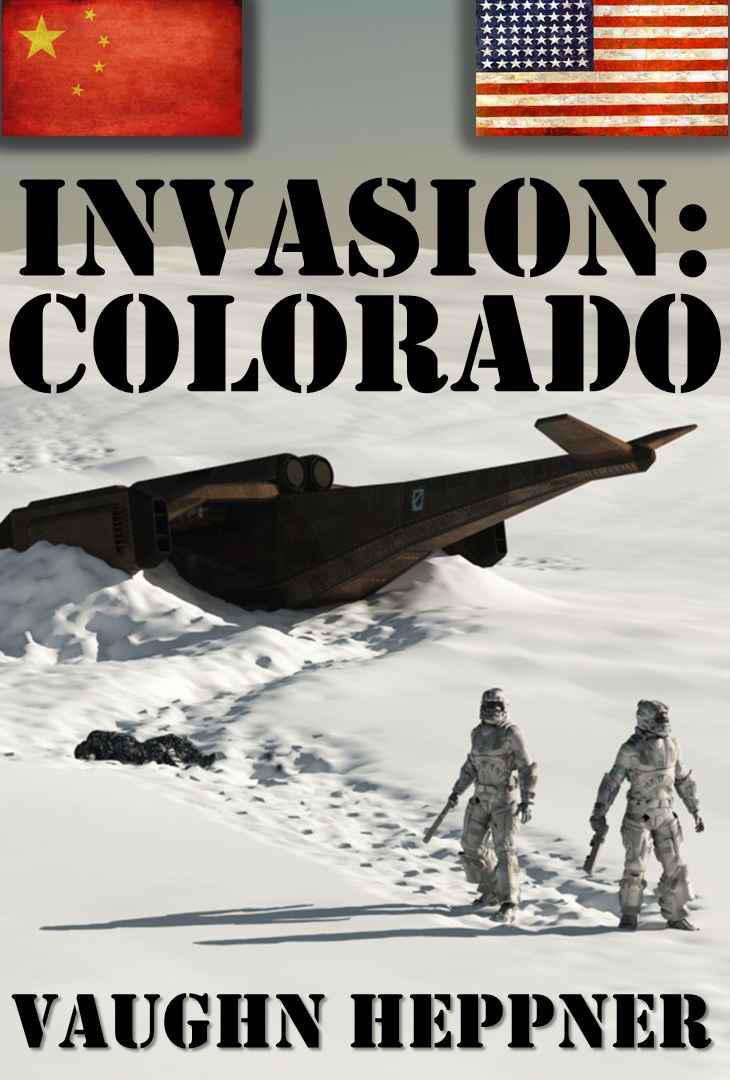 It is foolish and wrong to mourn the men who died. Rather we should thank God that such men lived.

This book is a work of fiction. Names, characters, places and incidents are either products of the author’s imagination or used fictitiously. Any resemblance to actual events, locales or persons, living or dead, is entirely coincidental. All rights reserved. No part of this publication can be reproduced or transmitted in any form or by any means, without permission in writing from the author.

The invasion of the United Sates by the Pan-Asian Alliance and the South American Federation in 2039 has few parallels in modern history. The closest example would be Hitler’s invasion of Russia in 1941.

In that year, Germany marshaled approximately three million ground troops in 167 divisions. Two hundred thousand of those soldiers were from satellite nations. The Germans envisioned Operation Barbarossa as a four-month blitzkrieg campaign—a panzer race to the Volga River, sealing off European Russia from its Asian hinterland.

In 2039, Operation Whirlwind dwarfed the German numbers, although it had a similar scope. Seven million Chinese, Japanese, Korean, Brazilian and Venezuelan soldiers in 368 divisions would roll across the New Mexico-Texas border. Instead of three Army Groups as the Germans used, Chairman Hong divided the force into three gigantic Fronts.

All together, this represented the greatest concentration of military power ever used in a single campaign. The world had never seen such might and it is unlikely that such a mass of men and tanks will ever again drive united toward a goal.

From
Military History: Past to Present
, by Vance Holbrook:

Chinese Plans
. Worsening, worldwide glaciation dominated Chairman Hong’s strategic thinking. Mass starvation was becoming a stark reality for almost every nation, including China. The American heartland with its continued bounty was the world’s most critical asset. The lure of the wheat fields drew Hong’s attention like a magnet and may have warped his judgment.

The grand plan was simple. The Pan-Asian Alliance together with the South American Federation marshaled the greatest invasion force in history—seven million ground troops in Northern Mexico, 368 divisions. They would smash across the Rio Grande as the German Dominion invaded New Orleans and Louisiana. Led by Marshal Liang, one gigantic thrust would use the Rocky Mountains as its western wall, driving north into the American Midwest. The second thrust under Marshal Wen would use the Mississippi River as its eastern wall, also driving north. In the center and linking the two Chinese Fronts was the SAF First Front under Marshal Sanchez. The Canadian border was the end goal of all three field marshals. Vast battles of annihilation would destroy the core of the American Armed Forces in the prairie corridor between the Rockies and the Mississippi.

This conquest would yield to Hong and Greater China the Great Plains wheat fields, and it would divide the United States into two unequal halves. In the following year, if the Americans didn’t sue for peace, Hong envisioned the Western Conquest, from the Rockies to the Pacific Coast. In the third year and campaign, and with German Dominion help, China would complete the American subjection with the Eastern Conquest from the Mississippi River to the Atlantic Coast.

Originally set for 12 May 2039 and with the addition of 2 million more ground troops, the timetable for Operation Whirlwind was seriously disarranged by the preemptive attack into California (see
Invasion: California
). Beginning 21 April 2039, two million Chinese troops smashed against the SoCal Fortifications and drove north into the Golden State. Unprecedented Chinese losses, the paucity of conquered territory and the deaths of Marshals Kao, Nung and Foreign Minster Deng shook the Chinese military and its allied forces, particularly the German Dominion. The need for Chinese reorganization and resupply of stockpiled munitions added many weeks to the original start date of Operation Whirlwind. Instead of May 12, the Midwestern invasion began on 15 June 2039.

American Plans
. American forces were heavily concentrated behind the Rio Grande in Texas and New Mexico, with coastline defenses along the southern Atlantic and Gulf States. The lessons in California taught the Americans the need for defense in depth. Mobilized American ground strength approximated five million on the Rio Grande, half a million in California with another million scattered elsewhere, primarily on the Eastern and Southern coastlines. Reserves were available and the formation and training of hastily assembled troops had begun. Although the country possessed the world’s largest concentration of rifles and shotgun, the problem was that more American materiel—tanks, cannons and planes—were desperately needed.

German Plans
. American defensive stubbornness in California impressed the German Dominion military. On their recommendation, Chancellor Kleist—the new Otto von Bismarck of the twenty-first century—reevaluated the situation he faced. He determined to hold back the GD military, letting the Chinese and Americans bled themselves white against each other. Afterward, he would seek easy objectives of opportunity. On that basis, the Chancellor weekly reassessed the war.

2039, June 15-July 6. The Invasion
. Simultaneously along a 2,000-kilometer front, the onslaught started at 3:30 A.M. with the customary air and artillery bombardments. The Americans had expected an offensive and therefore the Chinese failed to achieve surprise, although several Swan missiles with tactical EMP helped the initial attacks succeed. In grinding attritional battles, the Chinese and South American forces reached the Pecos River in West Texas and neared San Antonio in the east. In the last days of June, armored thrusts broke through the American lines and swept around San Antonio. The pocket surrendered on July 6, and 160,000 Americans marched into captivity, with the Chinese capturing 500 tanks and 350 artillery pieces.

2039, July 6-August 3. The Big Push
. Marshal Liang’s Third Front, which began operations at El Paso, battled relentlessly forward to Albuquerque, New Mexico and onward to Santa Fe. This Front saw some of the bloodiest fighting in the war and decimated the American forces. The Siege of Albuquerque bagged the Chinese 200,000 prisoners, 200 tanks and 400 guns, while the Siege of Santa Fe cost the Americans 300,000 casualties.

The Fourth Front made even greater territorial progress, shoving the American lines back to Houston and in the north to Dallas—as Marshal Wen sought to reach the Mississippi River. Both cities fell after Chinese armored thrusts bypassed the metropolises, although the troops’ fates were radically different. General McGraw fought his way free of Dallas, saving 130,000 soldiers, although leaving the majority of his heavy equipment behind. The trapped soldiers in Houston literally starved to death, refusing every offer to surrender.

In the last week of July, the South American Federation amphibiously invaded New Orleans, taking the place of the reluctant German Dominion military. It was a costly fiasco in terms of SAF blood and materiel, although the city fell to the invaders when the American forces finally retreated in good order.

His primary problem was the South America Federation troops. Their task was to mop up the American forces in the center of the corridor. The Brazilian and Venezuelan soldiers proved unequal to the challenge as well-trained American formations often repelled their attacks.

To bolster his allies and seeking a vast haul in prisoners, Chairman Hong detached the main tank armies of Third and Fourth Fronts. Despite the vigorous protests of his field commanders, Chinese armor swung corridor-ward to support Field Marshal Sanchez’s First Front as it approached Oklahoma City.

The immediate results of this unexpected change proved favorable. In a grand pincer move, the combined PAA-SAF troops trapped three American armies on the southern side of the Canadian River. A period of confused fighting followed as General McGraw made his second historic breakout, managing to extricate the mobile formations. In the early days of September, however, 225,000 American troops surrendered in what became known as the Oklahoma Pocket.

2039, September 7-24. Reorganization
. Sorting out the attacking formations and returning them to their parent Fronts took time. Tanks and other vehicles showed the strain of the terrific pace and long marches. This was a period of rest and reinforcement, including several mopping up operations.

It had become clear to both American and Chinese commanders the inferior quality of the SAF troops, and both made plans accordingly.

Newly formed U.S. Militia units finally began to arrive in number along the eastern side of the Mississippi River. This freed many of the regular Army troops there. The American command was divided about where to put these “added” forces. President Sims and the Joint Chiefs agreed to keep them east of the Mississippi River as a mobile “fire brigade” in case the Chinese crossed the great American river in force. General McGraw—a hero to many, though to others an unstable self-aggrandizer—argued otherwise. He urged the Joint Chiefs to take bold risks in order to defeat the enemy and hurl him back into Mexico.

2039, September 24-October 28. Grinding Battle
. Marshal Liang began the so-called Drive on Colorado. Unseasonable flood-level rains and ferocious American resistance slowed the advance to a crawl as the soil became muddy and slimy, with vast shallow lakes dotting the landscape. In the second week of an amazingly warm October for the Colorado Front Range, the offensive stalled completely even as the Chinese neared Greater Denver. The continuous fighting—for some, having lasted an incredible nineteen weeks—had exhausted both sides.

Heavier rains struck the Great Plains, turning the war there for both sides into a struggle against General Mud. Mainly due to brilliant Chinese hovertank exploitations, Wichita fell on October 6, while the last American soldier left Kansas City by October 26. Marshal Wen’s Fourth Front began a slow and careful approach on St. Louis.

COMMENT.
At this point in the conflict the main American Army desperately needed help. The original soldiers had taken massive causalities and received little rest during endless months of fighting retreats. There was a flood of quickly-trained reinforcements. Many of these troops had perished in the cauldron or encirclement battles. This stall in the Aggressor offensive gave America a breathing spell, but how long would it last and could they use it to shake down their new reserves? For America, the time of crisis had arrived.

The Chinese scented victory, but nascent guerilla and partisan activity in the Occupied Territories had already begun to tell on the supply situation. Worse in the Chinese view, the President of the United States had in desperation unleashed his ruthless Director of Homeland Security, who continued to raise ever greater numbers of Militia formations to throw into the furnace of battle.

The war hung in the balance, with the world awaiting its outcome
.

The Legend of Kevin the Plumber by Scot Gardner
You Know Who Killed Me by Loren D. Estleman
The Winter Ghosts by Kate Mosse
5 - Together To Join by Jackie Ivie
Slumdog Millionaire: A Novel by Vikas Swarup
Light the Hidden Things by Don McQuinn
Something in Disguise by Elizabeth Jane Howard
Loving Jiro by Jordyn Tracey
Guests on Earth by Lee Smith
Beneath the Skin by Nicci French